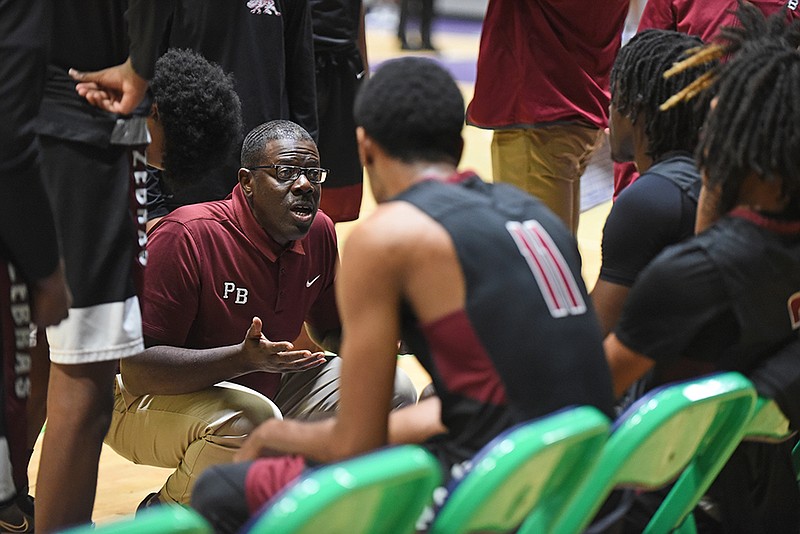 Pine Bluff (3-3) looked a bit shaky in the first half, allowing some open shots that the Gryphons (1-5) capitalized on. Braylen Hall hit a pair of 3-pointers for the Zebras, and Courtney Crutchfield contributed 15 of his 25 points in the half. Johnathan Hudson and Robert Alexander kept Southwest in the game with a combined 12 points in the first half.

THE GAME CHANGED WHEN...

The second half tipped off. Pine Bluff's intensity on the defensive end led the way for its offense to start opening up. There were multiple steals and blocks that resulted in wide open layups and dunks in transition.

Soon enough, Pine Bluff pushed its lead up to 20 points.

X'Zaevion Barnett was everywhere in the second half for the Zebras as well. He had 5 steals, and his energy played a big part in Pine Bluff pulling away as easily as they did. The Zebras appeared to give extra hustle, diving on the floor for loose balls and going for every rebound.

Crutchfield and Barnett. Crutchfield got a couple of game balls as a football player, and now he gets one for basketball. His night ended in the third quarter presumably for rest, but he tallied 25 points, 6 rebounds, 3 steals, a block and two assists on 12-of-24 shooting from the field.

He was aggressive in looking for his shot early and that paid off, but 4 of the rebounds were on the offensive glass. Crutchfield was trying to tap the ball out and grab rebounds all night on both ends.

Barnett tallied 19 points, 5 rebounds, 5 steals and 3 assists on 8-of-12 shooting from the field. There was a stretch where he hit three straight 3-pointers, and 4 of his steals came in the second half. His energy on the defensive end and willingness to move the ball was key for the Zebras in the second half.