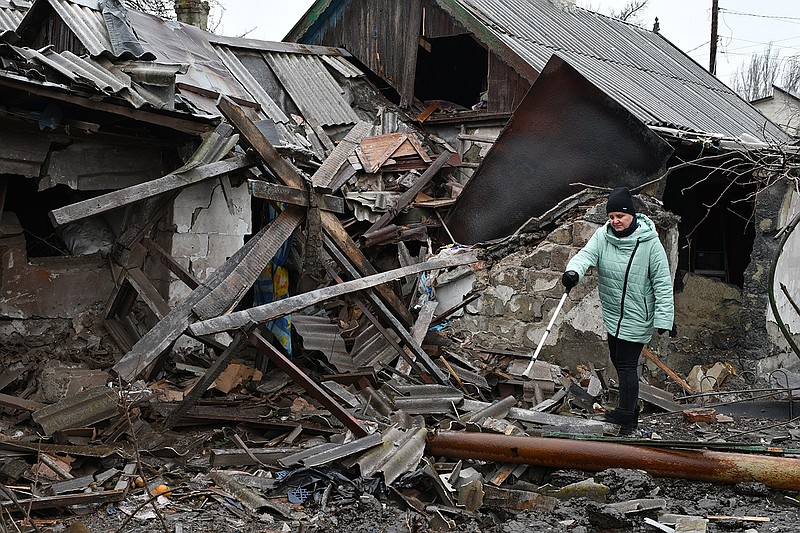 A woman stands amid debris from her house Thursday in Kurakhove in the Donetsk region of Ukraine. A Russian attack on Wednesday damaged a number of buildings in the town. Donetsk remains the center of recent fighting. (AP/Andriy Andriyenko)

Ukraine's nuclear company Energoatom said in a statement that Russian forces occupying the plant have placed several Grad multiple rocket launchers near one of its six nuclear reactors. It said the offensive systems are located at new "protective structures" the Russians secretly built, "violating all conditions for nuclear and radiation safety."

The claim could not be independently verified.

The Soviet-built multiple rocket launchers are capable of firing rockets at ranges of up to 25 miles, and Energoatom said they could enable Russian forces to hit the opposite bank of the Dnieper River, where each side blames the other for almost daily shelling in the cities of Nikopol and Marhanets. The plant is in a southern Ukrainian region the Kremlin has illegally annexed.

The Zaporizhzhia station has been under Russian control since the war's early days. Russia and Ukraine accuse each other of shelling the plant and risking a radiation release. Although the risk of a nuclear meltdown is greatly reduced because all six reactors have been shut down, experts have said a dangerous radiation release is still possible. The reactors were shut down because the fighting kept knocking out external power supplies needed to run the reactors' cooling systems and other safety systems.

The U.N.'s nuclear watchdog, the International Atomic Energy Agency, has stationed inspectors at the plant and has been trying to persuade both sides in the conflict to agree to a demilitarized zone around it. The agency did not immediately respond to a request for comment about the reported Grad installation. Ukraine has accused the Russians before of having heavy weapons at the plant. The Kremlin has said it needs to maintain control of the plant to defend it from alleged Ukrainian attacks.

With renewed focus on the dangers at Zaporizhzhia in the war, dragging on past nine months, the Kremlin is sending new signals about how to end it. It said Thursday it's up to Ukraine's president to end the military conflict, suggesting terms that Kyiv has repeatedly rejected, while Russian President Vladimir Putin vowed to press on with the fighting despite Western criticism.

Kremlin spokesman Dmitry Peskov said that "[Ukrainian President Volodymyr] Zelenskyy knows when it may end. It may end tomorrow if he wishes so."

The Ukraine war has deteriorated relations between Russia and much of the rest of the world, but limited cooperation continues in some areas, such as exchanges of prisoners.

The Kremlin has long said that Ukraine must accept Russian conditions to end the fighting. It has demanded that Kyiv recognize Crimea -- a Ukrainian peninsula that Moscow illegally annexed in 2014 -- as part of Russia and also accept Moscow's other land gains in Ukraine.

Zelenskyy and other Ukrainian officials have repeatedly rejected those conditions, saying the war will end when the occupied territories are retaken or Russian forces leave them.

In an acknowledgement that it's taking longer than he expected to achieve his goals in the conflict, Putin said Wednesday that the fighting in Ukraine "could be a lengthy process" while describing Moscow's land gains as "a significant result for Russia."

During a conference call with reporters, Peskov said Moscow wasn't aiming to grab new land but will try to regain control of areas in Ukraine from which it withdrew just weeks after incorporating them into Russia in hastily called referendums -- which Ukraine and the West reject as illegal shams. After earlier retreats from the Kyiv and Kharkiv areas, Russian troops last month left the city of Kherson and parts of the Kherson region, one of the four illegally annexed Ukrainian regions.

Putin vowed Thursday to achieve the declared goals in Ukraine regardless of the Western reaction.

"All we have to do is make a move and there is a lot of noise, chatter and outcry all across the universe. It will not stop us fulfilling combat tasks," Putin said.

He described Russian strikes on Ukraine's energy facilities and other key infrastructure as a legitimate response to an Oct. 8 truck bombing of a key bridge linking Crimea with Russia's mainland, and other attacks the Kremlin claimed Ukraine carried out. Putin also cited Ukraine's move to halt water supplies to the areas in eastern Ukraine that Russia controlled.

"There is a lot of noise now about our strikes on the energy infrastructure," Putin said at a meeting with soldiers whom he decorated with the country's top medals. "Yes, we are doing it. But who started it? Who struck the Crimean bridge? Who blew up power lines from the Kursk nuclear power station? Who is not supplying water to Donetsk?"

While stopping short of publicly claiming credit for the attacks, Ukrainian officials welcome their results and hint at Ukrainian involvement.

The Donetsk region has been the epicenter of the recent fighting. Russian artillery struck the town of Yampil during distribution of humanitarian aid to civilians, Ukrainian officials said. Buildings were damaged in Kurakhove, 22 miles west of the regional capital, Donetsk, officials said.

More than ten cities and villages in the region were shelled, including the town of Bakhmut, which has remained in Ukrainian hands despite Moscow's goal of capturing the entire annexed Donbas region bordering Russia.

Pope Francis wept Thursday in the center of Rome as he prayed for peace in Ukraine during an annual Christmas visit to venerate a statue of the Virgin Mary near the Spanish Steps.

Francis leaned over and choked up, unable to speak precisely as he arrived at the part of the prayer where he said: "I would have liked to have brought you the thanks of the Ukrainian people ..."

As the crowd of thousands of dignitaries, clergy and ordinary Romans realized that the pope was overcome with emotion, they broke into applause and encouraged him to continue.

After a long pause, Francis continued the prayer, picking up from where he left off: "... the Ukrainian people for the peace we have so long asked the Lord. Instead I must present you with the pleas of children, elderly, mothers and fathers and the young people of that martyred land, that is suffering so much."

The moment came during the pope's annual visit to the Spanish Steps, which falls on the Dec. 8 feast day dedicated to Mary, the mother of Jesus. The event marks the unofficial start of the Christmas season in Italy.

Information for this article was contributed by E. Eduardo Castillo, Yuras Karmanau and staff writers of The Associated Press. 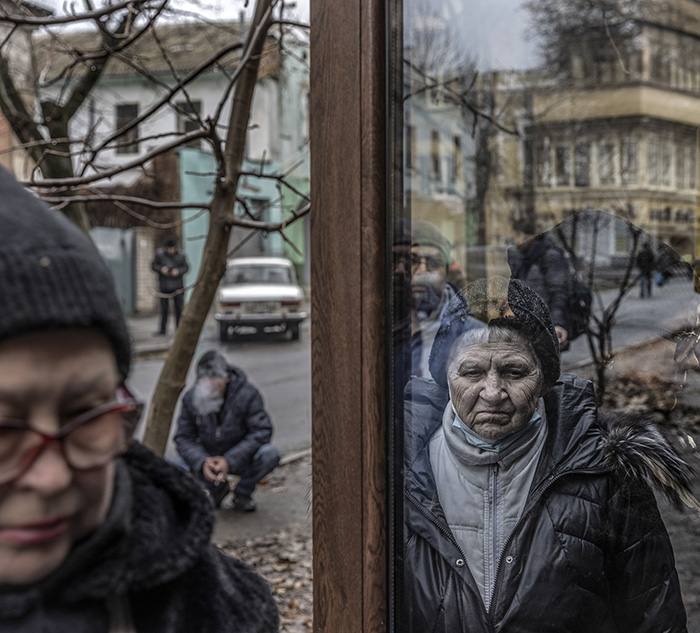 Civilians wait Thursday at the doorway of a food and aid distribution center set up in the basement of a tattoo parlor in Kherson, Ukraine. Ukraine officials said Russia has placed multiple rocket launchers around the Zaporizhzhia nuclear plant, prompting fears of radiation danger at the shut-down facility. (The New York Times/David Guttenfelder)