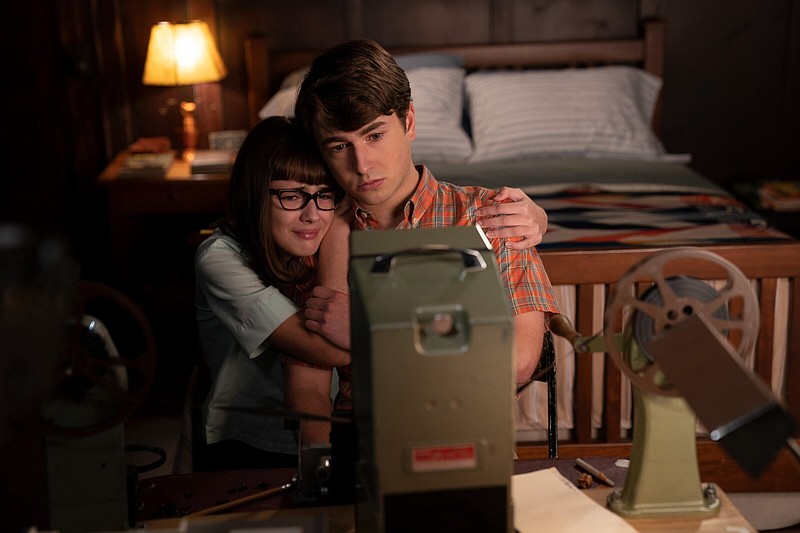 Natalie Fabelman (Keeley Karsten) is pressed into starring in her nascent filmmaker brother Sammy’s (Gabriel LaBelle) homemade productions in Steven Spielberg’s semi-autobiographical ode to the power of movies “The Fabelmans.”

Steven Spielberg takes us back to his childhood with "The Fabelmans," a semi-autobiographical odyssey that sees the acclaimed filmmaker at his most personal. I went in fully expecting to see an epic "love letter" to moviemaking, and it certainly has some of that. But in reality, "The Fabelmans" is more of a testament to why movies are made. It explores what inspires and drives artists to tell the stories they tell. And no surprise (with Spielberg at the helm), it's also a testament to the transforming power of the cinematic language, especially in the hands of a gifted visionary and craftsman.

The film features Spielberg exploring key events in his life, making stops along his own personal timeline that affected his family and shaped his decision to be a filmmaker. Many of the stops highlight specific moments when he began to see his parents not just as his mom and dad, but as real people. Others show how it was filmmaking that not only helped him to understand the world around him, but also communicate his feelings to others. It doesn't always come together as seamlessly as you would want, but when absorbed and then considered as a whole, it's hard not to be impressed (and at times swept away) by what we're given.

Spielberg's stand-in is Sammy Fabelman (played as an 8-year-old by Mateo Zoryon Francis-DeFord and later as a 16-year-old by Gabriel LaBelle). We first meet young Sammy in 1952 as he nervously stands in line at his neighborhood cinema to see Cecil B. DeMille's circus opus "The Greatest Show on Earth." His parents explain what's about to happen once they go inside for Sammy's first moviegoing experience.

"Mommy and daddy will be right next to you," his father assures him. "The lights will go down. There may be some organ music as the curtains open. Don't be scared." They then follow the line inside as the glowing marquee welcomes them to see ­DeMille's film.

Needless to say, the film has an immeasurable impact on Sammy. Before long he's attempting to re-create ­DeMille's famous train crash scene with his own electric train set and a camera. It's the first leg of his (and Spielberg's) journey toward becoming a filmmaker.

The starry-eyed Francis-DeFord is wonderful at capturing younger Sammy's awe and wonder. Through him you can see the gears turning as the inquisitive young boy tries to grasp the creative forces behind what he has seen on screen.

While his growing love for cinema certainly has its place in the film, it's Sammy's family life, especially his relationship with his parents, that form the crux of the story. The Fabelmans were the only Jewish family in their middle-class New Jersey neighborhood. Sammy's father, Burt (Paul Dano), is a computer engineer and technician for RCA. His mother, Mitzi (Michelle Williams), is a skilled pianist. As a couple, they have a compelling "man of science" vs. "woman of the arts" dynamic.

When Burt gets hired by General Electric, Sammy, his parents, his three sisters, and their goofball family friend Bennie (Seth Rogen) move to Phoenix. We then bolt ahead several years where Sammy (now a teenager) is ready to make his first bona fide movie. Inspired by "The Man Who Shot Liberty Valence," he and a few pals from his Boy Scout troop shoot a Western short he calls "Gunsmog."

From there Sammy's passion for moviemaking only grows, but Burt routinely dismisses it as nothing more than a "a hobby." He means well and he's a good father. But his linear thinking and blind optimism constantly hinders him from seeing the obvious. Meanwhile his mother's frustrations and insecurities lead to impulsiveness and eventually a growing emotional detachment. Cracks are forming and only widen after another move. This time to northern California, where Sammy's roller coaster high school years see him experience bullying and antisemitism, but also his first love and (of course) chances to make more movies.

But what's most fun and revealing is watching Sammy learn the world through his camera. Not only does it allow him to tell stories, but also to truly see people. He finds that not only can the camera reveal the truth, but it gives the person looking through the lens control of that truth. They can conceal it or expose it; twist it or erase it altogether. He also discovers the camera's ability to sway opinions, earn respect, and win hearts. And Sammy uses it to his advantage (an interesting bit of self-critique from Spielberg perhaps).

As we're ushered through the family drama, Spielberg's patchwork approach can feel a little messy. And while I loved most of the performances (Dano is terrific and Judd Hirsch brings a jolt in his brief 10 minutes), I sometimes struggled with Williams' Mitzi -- an emotional maelstrom rarely given a quiet moment. Yet in the end they all help bring life to Spielberg's memories. They're still a little blurry in spots, and some of the pieces are missing. But this inward looking feature achieves what it sets out to do. It sees one of cinema's all-time greats not just showing how he became a filmmaker, but also what it means to be a filmmaker. Once that aim came into focus for me, my expectations suddenly didn't matter, and Spielberg had me, just as he always has.