Athlete swapped for arms dealer by Compiled by Democrat-Gazette staff from wire reports | December 9, 2022 at 4:51 a.m. 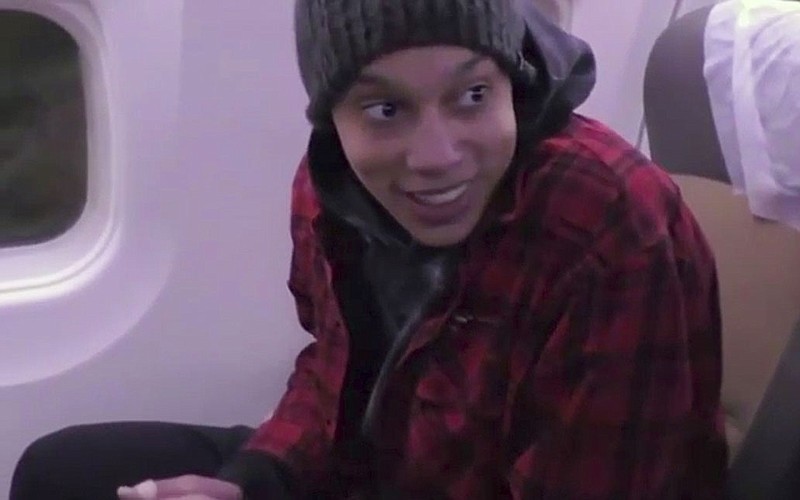 Brittney Griner smiles Thursday as she sits aboard a plane bound from Russia to Abu Dhabi to be exchanged for Russian Viktor Bout. The exchange happened after months of back channel negotiations. (AP/Russian Federal Security Service)

But the U.S. failed to win freedom for another American, Paul Whelan, jailed in Russia for nearly four years.

The deal, the second in eight months amid tensions over Russia's invasion of Ukraine, secured the release of the most prominent American detained abroad and achieved a top goal for President Joe Biden. Yet it carried what U.S. officials conceded was a heavy price.

"She's safe, she's on a plane, she's on her way home," Biden said from the White House, where he was accompanied by Griner's wife, Cherelle, and administration officials.

Biden's authorization to release Bout, the Russian felon once nicknamed "the Merchant of Death," underscored the heightened urgency that his administration faced to get Griner home, particularly after the recent resolution of her criminal case on drug charges and her subsequent transfer to a penal colony. Griner, who also played pro basketball in Russia, was arrested at an airport there after Russian authorities said she was carrying vape canisters with cannabis oil.

Griner's status as an openly gay Black woman, locked up in a country where authorities have been hostile to the LBGTQ community, injected racial, gender and social dynamics into her legal saga and brought unprecedented attention to the population of wrongful detainees.

The Russian Foreign Ministry confirmed the swap, saying in a statement carried by Russian news agencies that the exchange took place in Abu Dhabi and that Bout had been flown home. Russian media showed Griner walking off a Russian plane in Abu Dhabi where she was greeted by a U.S. official. Two Russians greeted Bout with a hug.

Griner will head to a medical facility in San Antonio once she arrives back in the United States, according to CNBC.

Quoting a senior official in the Biden administration, CNBC said she will be flown to the facility to receive care. Her wife, Cherelle Griner, will meet her there, according to the report.

The official did not say specify which medical facility, but Lackland Air Force Base is the largest military facility in San Antonio.

Later, Russian TV showed Bout walking off the plane on a snow-covered tarmac in Moscow, his mother and wife hugging him, giving him flowers.

Biden spoke by phone with Griner, and she was expected back in the U.S. within 24 hours, Biden said. U.S. officials said she would be offered specialized medical services and counseling.

Both Russian and U.S. officials had conveyed cautious optimism in recent weeks after months of strained negotiations, with Biden saying in November that he was hopeful that Russia would engage in a deal now that the midterm elections were completed. A top Russian official said last week that a deal was possible before year's end.

Even so, the fact that the deal was a one-for-one swap was a surprise given that U.S. officials had for months expressed their determination to bring home both Griner and Whelan, a Michigan corporate security executive jailed in Russia since December 2018 on espionage charges that his family and the U.S. government have said are baseless.

"We've not forgotten about Paul Whelan," Biden said. "We will keep negotiating in good faith for Paul's release."

However, U.S. officials said they did not see an immediate path to bringing about Whelan's release, saying Russia has treated his case differently because of the "sham espionage" charges against him. Still, they said they believe communication channels with the Russians remain open for negotiations for his freedom.

"We didn't want to lose the opportunity today to secure the release of one of them," said Secretary of State Antony Blinken.

Whelan's brother David said in a statement he was "so glad" for Griner's release but also disappointed for his family. He credited the White House with giving the Whelan family advance notice and said he did not fault officials for making the deal.

"The Biden administration made the right decision to bring Ms. Griner home, and to make the deal that was possible, rather than waiting for one that wasn't going to happen," he said.

"I think we all realize that the math is not going to work out for Paul to come home anytime soon, unless the U.S. government is able to find concessions," David Whelan said. "And so I think we aren't really sure what the way forward is."

The family does not have any way to judge the likelihood "that he will ever be free other than by serving his entire term," he added.

In a statement released by Griner's agent, her family thanked the Biden administration as well as the Whelan family, who they said "have been generous with their support for Brittney and our family during what we know is a heartbreaking time."

In releasing Bout, the U.S. freed a former Soviet Army lieutenant colonel whom the Justice Department once described as one of the world's most prolific arms dealers. He was arrested in Thailand in 2008 and extradited to the U.S. in 2010.

Bout was serving a 25-year sentence on charges that he conspired to sell tens of millions of dollars in weapons that U.S officials said were to be used against Americans. Biden issued an executive grant of clemency to free the arms dealer from a federal prison in Illinois to effect the prisoner swap.

The deal drew criticism from some prominent Republicans, including House Minority Leader Kevin McCarthy, his party's nominee to become speaker once the GOP retakes control of the chamber in January.

"This is a gift to Vladimir Putin, and it endangers American lives," he said of Bout's release. "Leaving Paul Whelan behind for this is unconscionable."

The U.S.-Russia exchange was carried out despite deteriorating relations between the powers prompted by Moscow's war against Ukraine. The White House said Kyiv was provided assurances that the terms were limited to the prisoner swap and would not impact U.S. support for Ukraine's defense.

Over the summer, the imprisonment of Americans produced the highest-level known contact between Washington and Moscow -- a phone call between Blinken and Russian Foreign Minister Sergey Lavrov -- in more than five months.

In an extraordinary move during otherwise secret negotiations, Blinken revealed publicly in July that the U.S. had made a "substantial proposal" to Russia for Griner and Whelan. Though he did not specify the terms, people familiar with it said the U.S. had offered Bout.

The public overture drew a rebuke from the Russians, who said they preferred to resolve such cases in private, and carried the risk of weakening the U.S. government's negotiating hand for this and future deals by making the administration appear desperate. But the announcement also communicated to the public that Biden was doing what he could and to ensure pressure on the Russians.

The release also followed months of back channel negotiations involving Bill Richardson, the former U.S. ambassador to the United Nations and a frequent emissary in hostage talks, and his top deputy, Mickey Bergman.

Following Griner's arrest at Moscow's Sheremetyevo Airport in February, she pleaded guilty in July but still faced trial because admitting guilt in Russia's judicial system does not automatically end a case.

She acknowledged in court that she possessed the canisters with cannabis oil but said she had no criminal intent and their presence in her luggage was due to hasty packing.

Before being sentenced on Aug. 4 and receiving a punishment her lawyers said was out of line for the offense, an emotional Griner apologized "for my mistake that I made." She added, "I hope in your ruling it does not end my life."

Her supporters had largely stayed quiet for weeks after her arrest, but that approach changed in May once the State Department designated her as unlawfully detained. A separate trade -- Marine veteran Trevor Reed for Konstantin Yaroshenko, a Russian pilot convicted in the U.S. in a cocaine trafficking conspiracy -- spurred hope that additional exchanges could be in the works.

Whelan has been held in Russia since December 2018. The U.S. government also classified him as wrongfully detained. He was sentenced in 2020 to 16 years in prison.

Pressure to include Paul Whelan in any trade for Griner increased after an April trade for Marine veteran Trevor Reed did not include him.

Paul Whelan told CNN on Thursday that he is "greatly disappointed that more has not been done" to secure his release.

"I would say that if a message could go to President Biden, that this is a precarious situation that needs to be resolved quickly," he said in a phone interview. "My bags are packed. I'm ready to go home. I just need an airplane to come and get me."

Information for this article was contributed by Eric Tucker, Matthew Lee, Zeke Miller, Colleen Long, Aamer Madhani, Mike Householder and Kathleen Foody of The Associated Press and by Sarah Bahari of The Dallas Morning News (TNS). 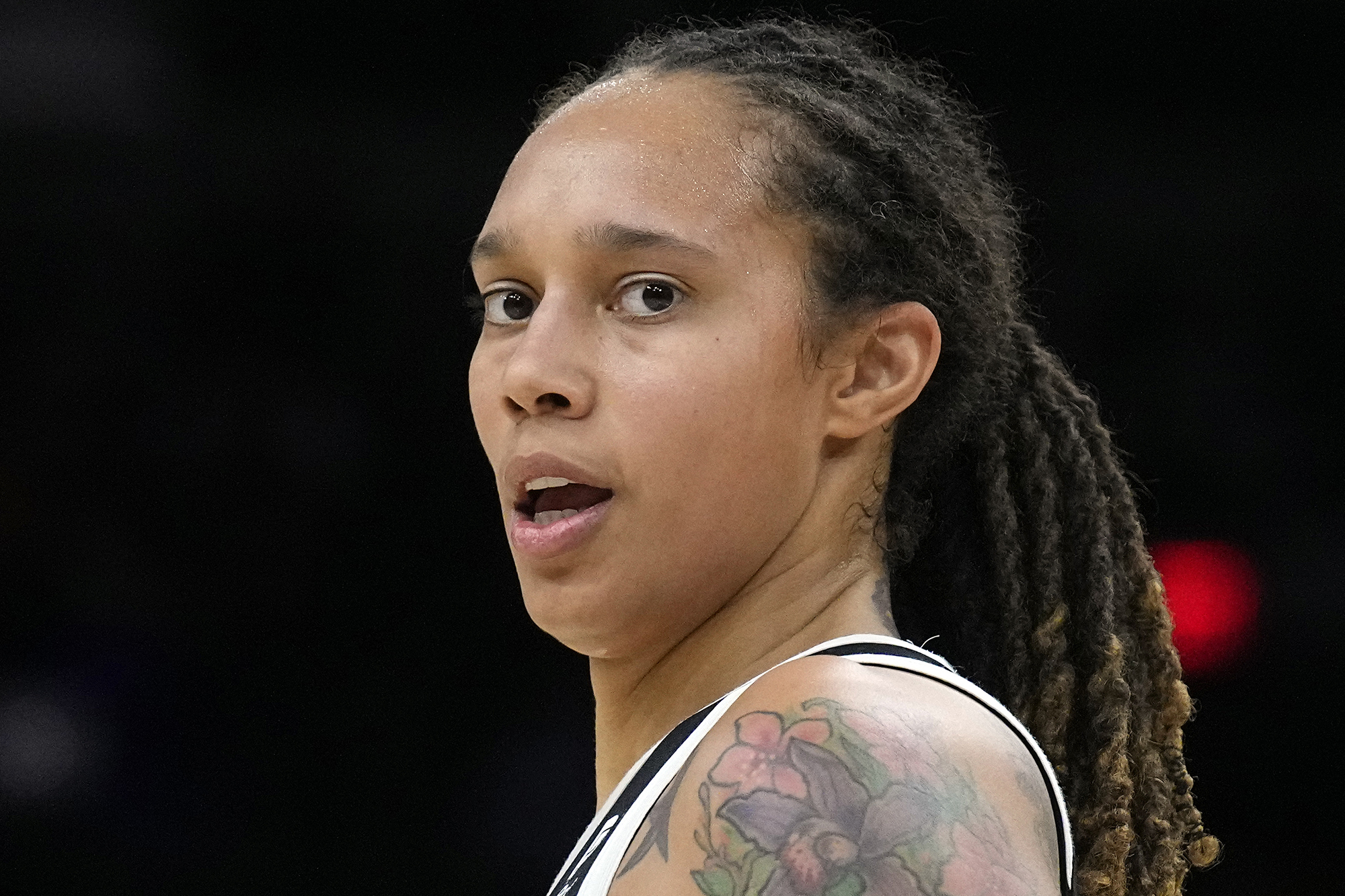 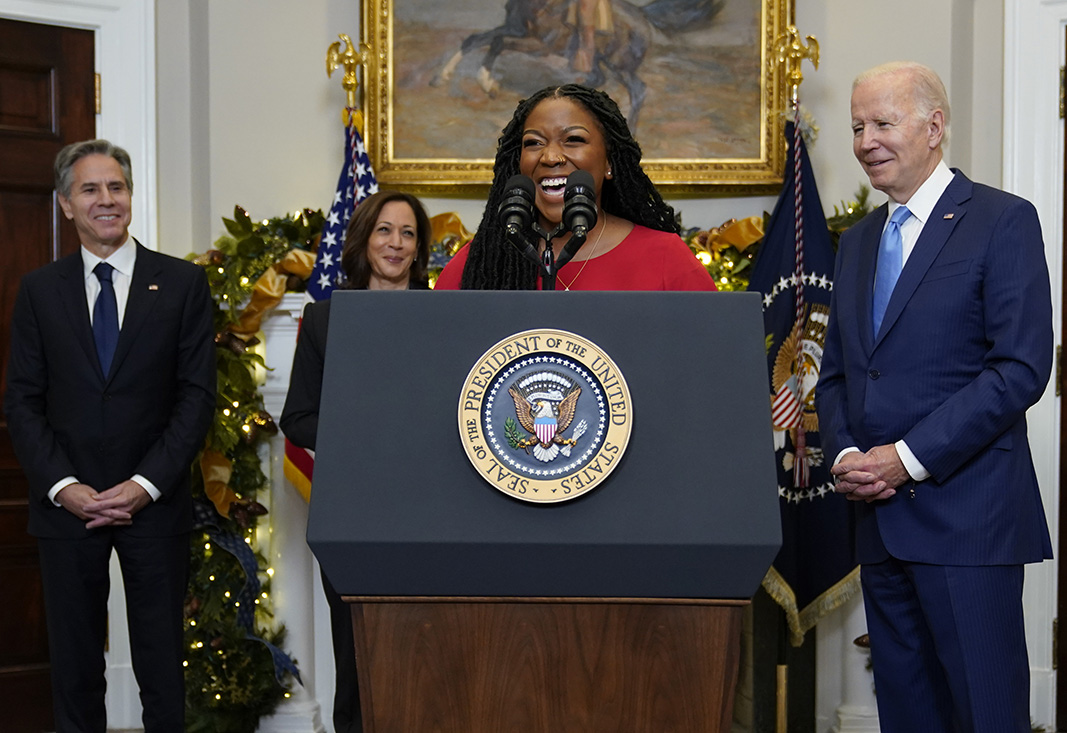 Cherelle Griner, wife of Brittney Griner, joins President Joe Biden at the White House on Thursday for the announcement of the WNBA star’s release. Secretary of State Antony Blinken and Vice President Kamala Harris stand behind them. (AP/Patrick Semansky) 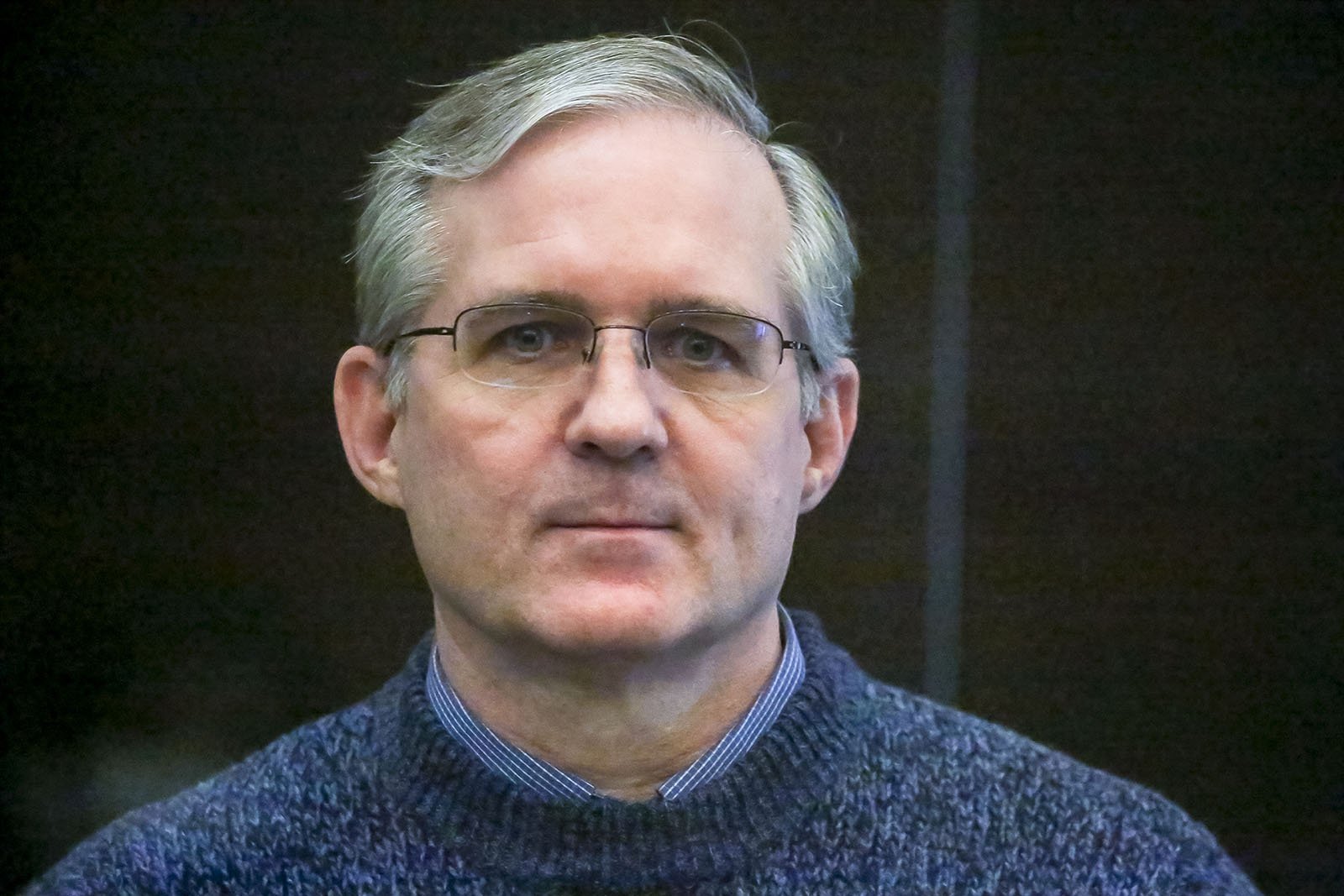 Paul Whelan, a former U.S. marine who was arrested for alleged spying, listens to the verdict in a courtroom at the Moscow City Court in Moscow, Russia, June 15, 2020. (Sofia Sandurskaya, Moscow News Agency photo via AP, File) 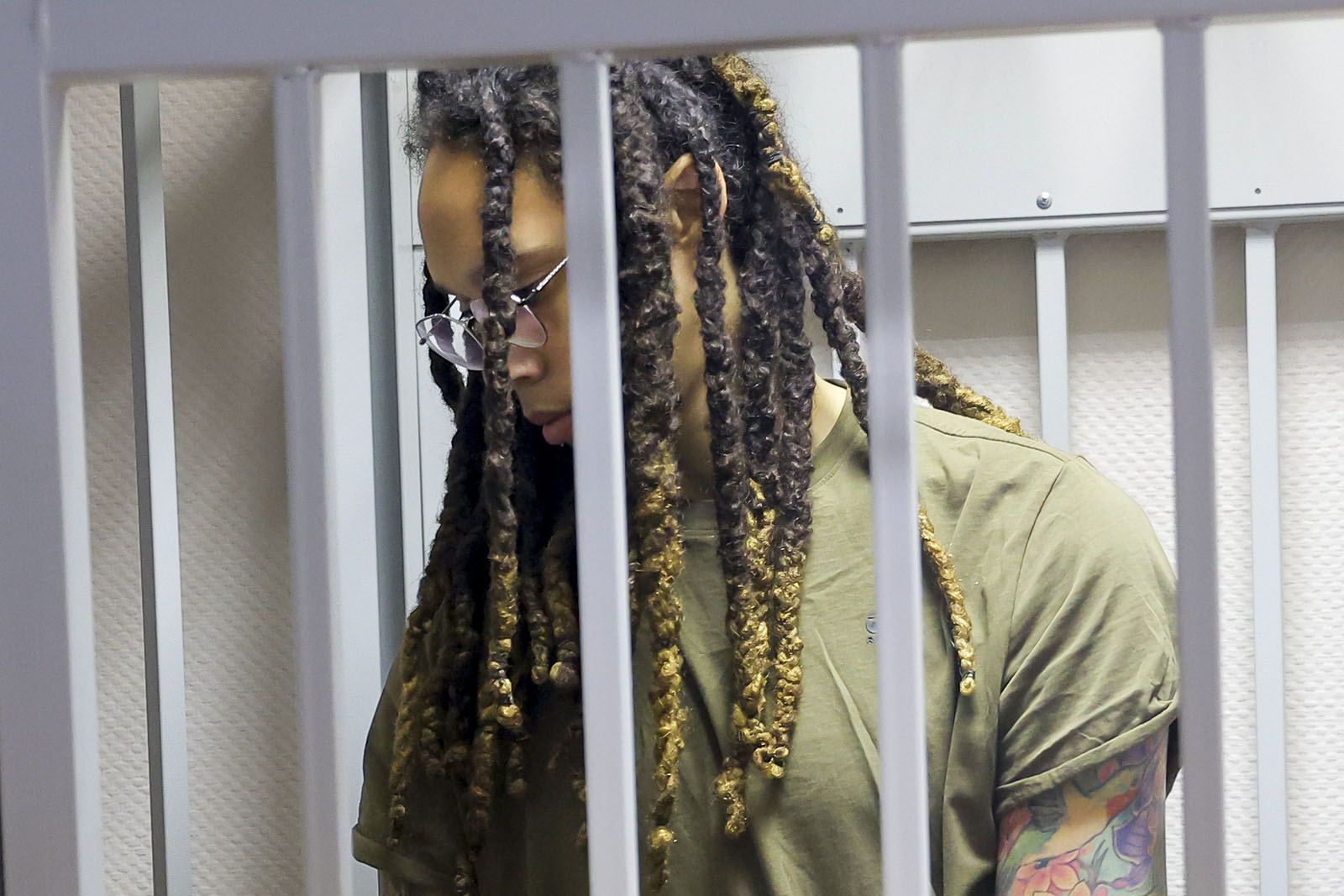 Brittney Griner stands in a courtroom cage outside Moscow on Aug. 2. She was sentenced to prison two days later. (AP/Evgenia Novozhenina)