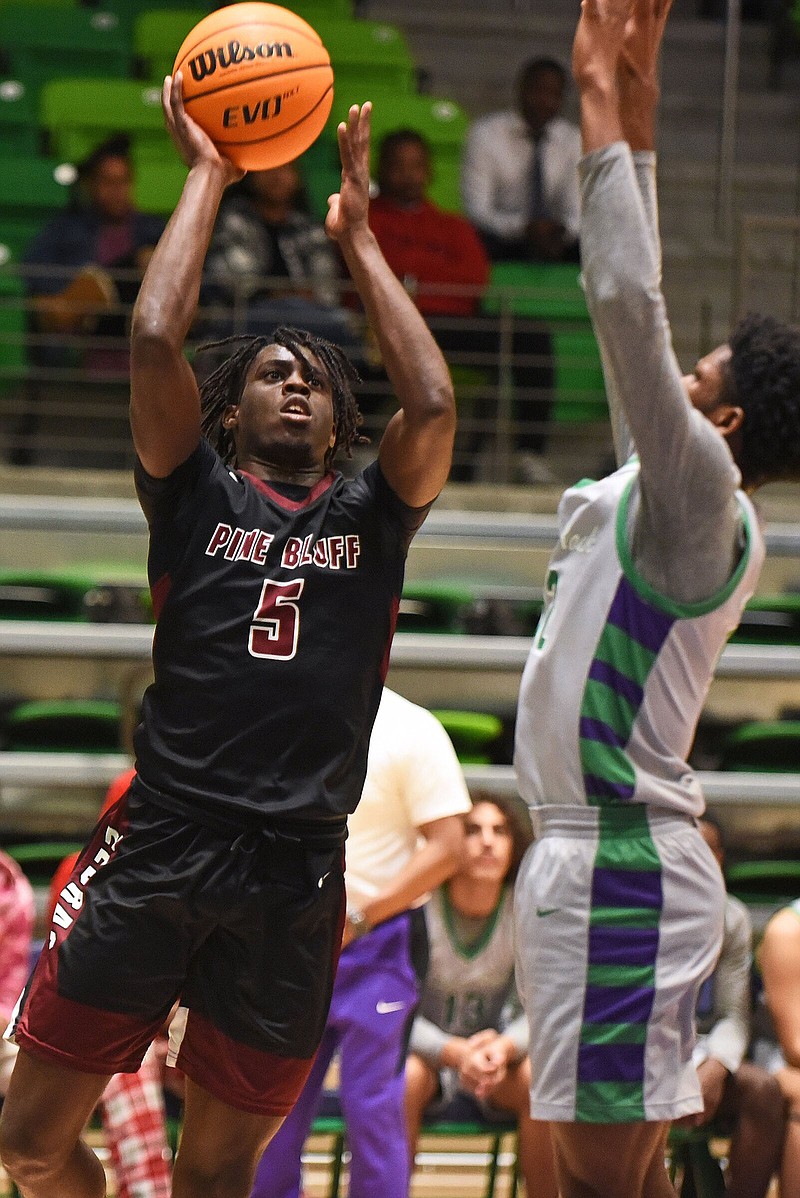 Pine Bluff’s Courtney Crutchfield (5) puts up a shot Thursday in front of Little Rock Southwest’s Samuel Meredith during the Zebras’ 75-40 victory over the Gryphons in the Charles Ripley Holiday Classic at Gryphon Arena in Little Rock. More photos at arkansasonline.com/1209lrswpb/. (Arkansas Democrat-Gazette/Staci Vandagriff)

Pine Bluff followed up one definitive win with another one Thursday.

The Zebras shook off some rough moments in the first half but put together a decisive stretch in the third quarter to pull away and beat Little Rock Southwest 75-40 during the opening round of the Charles Ripley Holiday Classic at Gryphon Arena.

Courtney Crutchfield finished with 27 points, 9 rebounds and 7 assists for Pine Bluff (5-4), which has seemingly found its footing after getting off to a slow start to the season.

"We're starting to play much better," said Pine Bluff Coach Billy Dixon, whose team lost their first three games but have since won five of their last six. "We were without a key piece in this one, but we're starting to understand what we need to do to win games. Other guys are starting to step up as well, and that's what we need."

The Zebras didn't have starting forward Jordon Harris, who'd averaged 14.3 points, 14 rebounds and 5 blocks the previous four games. The Zebras went 3-1 in that span, including their 18-point road victory Tuesday at Class 5A early season No. 1 Lake Hamilton. His presence, Dixon said, is huge not only due to his 6-6 frame but also because of the leadership he brings as a senior.

Pine Bluff straddled the back of Crutchfield and got a noteworthy outing from X'Zaevion Barnett to help run away from the host team.

Johnathan Hudson scored 13 points for the Gryphons, who made the Zebras work in the first half.

Southwest never led but was within 26-20 at halftime after Pine Bluff went 5 of 20 (25%) from the floor in the second quarter. The Zebras, however, cranked up its offense in the third quarter, making nine of their first 10 shots during a period-opening 19-2 run. Pine Bluff eventually outscored the Gryphons 31-8 in the quarter to take command.

"We came out dragging at the start," Dixon explained. "Some guys were claiming it was the bus ride, and others were saying it was the uniform because we hadn't worn black all year. Of course, you can only imagine what I was saying.

"But at halftime, we just told them that we were stinking it up and playing with no energy. ... We just didn't come out the way we should. We kind of got going there in the second half. Once we get all our guys back on the floor and we're able to get some consistency, I think we'll start to really play better."

Nate Coley scored eight of his 10 points as Parkview (3-3) rebounded from a 26-20 halftime deficit to move into today's semifinals.

Carson Backus had 12 points for the Patriots, who arrived back from a game in Missouri after midnight Thursday and played without standout junior Dallas Thomas. The Patriots used an 11-0 run at the start of the third quarter to snatch the lead away from Mills (4-3) for good.

Parkview was clinging to a 40-39 advantage when Coley's three-point play with 2:18 remaining in the game gave it the cushion it needed to hold on.

Marcus Kendrick put up 11 of his 14 points in the first half, and Q.J. King ended the night with 13 points for the Comets.

Central (7-2) scored the first 16 points of the game and never blinked in blitzing its former 6A-Central Conference opponents.

Gavin Moore hit four three-pointers and ended with a game-high 22 points and five steals for the Tigers, who led 42-15 at halftime after scoring 11 of the last 13 points of the second quarter. Luke Moore ended with 21 points, including four three-pointers, with three steals, and Annor Boateng had 10 of his 14 points in the third quarter.

Elem Shelby scored nine points, and both Drake Fowler and Camarion Bead added seven apiece for the Hornets, who trailed 4-2 before their 13-point surge gave them the lead. Bryant would then score the first 12 points of the second quarter to increase its cushion.

Landen Hill and Jayson McNearly both had four points for the Warriors, who didn't net its first points of that second quarter until Kailon Harris completed a three-point play with 2:40 to go and were behind 36-9 at the half.