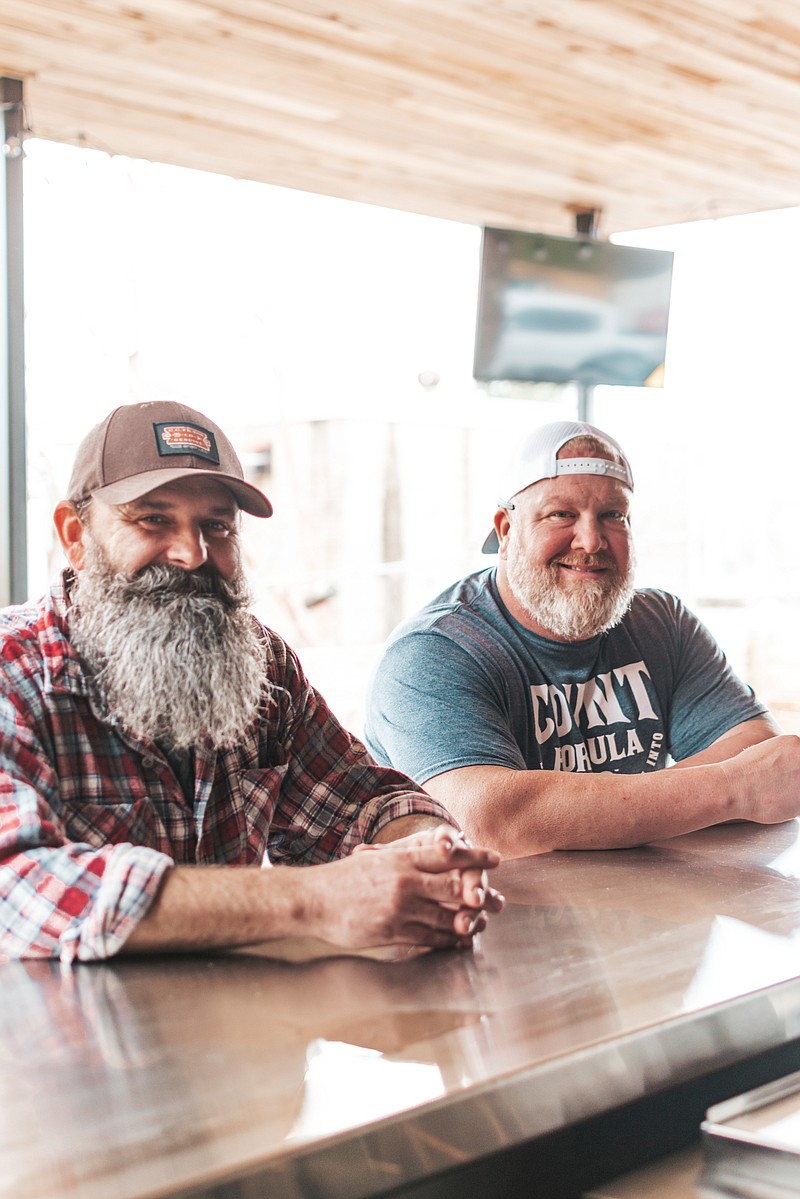 Walt Todd (left) and Kelly Lovell are co-owners of Count Porkula.(Special to the Democrat-Gazette)

Count Porkula at the Crossroads opened Tuesday at 201 Keightley Drive, just a smidge north of the intersection of Cantrell Road and Mississippi Street, Little Rock. Co-owners Walt Todd and Kelly Lovell moved their operation out of The Rail Yard in Little Rock's East Village into the new 2,900-square-foot building, constructed on the site of the longtime Ozark Country Restaurant, previously the Ozark Mountain Smokehouse, destroyed by a May 2018 fire. Lovell and Todd had operated out of a food truck before establishing themselves at The Rail Yard in late 2018.

This is the second restaurant in their partnership with the Keet Family's JTJ Restaurants; the first, Count Porkula on the Boulevard, opened in June on Maumelle Boulevard in North Little Rock. The Crossroads menu will include the "classic staples" they've been serving in the East Village, "and be consistent with their North Little Rock restaurant with slight tweaks," according to a news release.

Monday is the grand opening of Little Rock's first Toasted Yolk Cafe, in the Shoppes at Chenal shopping center, 17406 Chenal Parkway, Little Rock. From 7 a.m.-3 p.m., according to a Facebook post (facebook.com/thetoastedyolklittlerock), "enjoy breakfast, brunch, lunch and drinks." All grand-opening guests will receive free churro doughnuts (cake doughnuts dusted with cinnamon and sugar served with warm caramel dipping sauce), the mimosas will be half price and three guests can win, through a digital raffle, one free entree per week for one year. The restaurant will donate 10% of all grand opening day sales to local nonprofit Access, which offers full-time education, therapy, training and activities for children and youths with learning disabilities. We're still trying to track down a phone number. thetoastedyolk.com.

And speaking of Maumelle Boulevard, an update on Marty's Place Restaurant Bar and Grill, going into the former IHOP at 11501 Maumelle Blvd., on the North Little Rock verge of Maumelle: One of our industry sources reports a late January target to open. According to owner Marty Gunaca, CEO of Arkansas IHOP franchisee Golden Cakes Inc., who owns the building, it's to be a food and beverage concept "unique to the Maumelle-North Little Rock area."

And still speaking of Maumelle Boulevard -- sort of -- Italian Coffee Corner, a branch of the Coffee Corner, 9823 Maumelle Blvd., North Little Rock, opened in early November in the southeast corner of the lobby of the Simmons Tower, 425 W. Capitol Ave. at Broadway, Little Rock. It's in the kiosk previously occupied by a Subway outlet, next door to Banana Leaf, which expanded into a small portion of that space to make room for a full kitchen. Owners Bruno Muskaj and his wife, Yuliia Kornytska, had to wait three months for the delivery of an Italian-made Lavazza espresso machine and they're using Lavazza's 100% Arabica beans, according to a news release; they also serve pastries, including chocolate danishes, and savory sandwiches on croissants. Hours are 7 a.m.-3 p.m. Monday- Friday. (501) 400-8661.

Frontier Diner, 10424 Interstate 30, Little Rock, reopened Dec. 8 after having to close Dec. 5 because the driver of an SUV lost his brakes while trying to maneuver around another vehicle and crashed through the front of the restaurant shortly before the place opened at 6 a.m. There were no casualties, but it caused a heckuva mess. "We've boarded up the large hole and made it safe for our customers and staff while we wait on insurance to approve a contractor," according to a Facebook post (facebook.com/FrontierDiner). Hours should be back to normal, or close to it: 6 a.m.-2 p.m. Monday-Friday, 6 a.m.-1 p.m. Saturday. (501) 565-6414.

And we are constantly bombarded with "survey" pitches -- why, just on Tuesday morning alone, our inbox contained excited revelations on the highest salary that young Arkansans ever expect to earn; to which other states Arkansans are moving; and the most popular time to work out in each state. (Here in Arkansas, it's 6 p.m. on Tuesdays. Who knew? And unless you run a gym, why would you want to?) Most of the time we can't delete them fast enough, but every once in a very rare while we get one that is restaurant-related and might be of sufficient interest to earn (i.e. waste) a bit of space in this column. Thus: "A new study has revealed that Sonic is the most popular fast-food restaurant in Arkansas. The study, conducted by price-tracking experts at Pricelisto [pricelisto.com], analyzed Google USA data for the most popular fast-food restaurants based on search interest and popularity over the past 12 months." The runners-up are probably no surprise: Taco Bell and Subway.

Has a restaurant opened -- or closed -- near you in the last week or so? Does your favorite eatery have a new menu? Is there a new chef in charge? Drop us a line. Send email to: 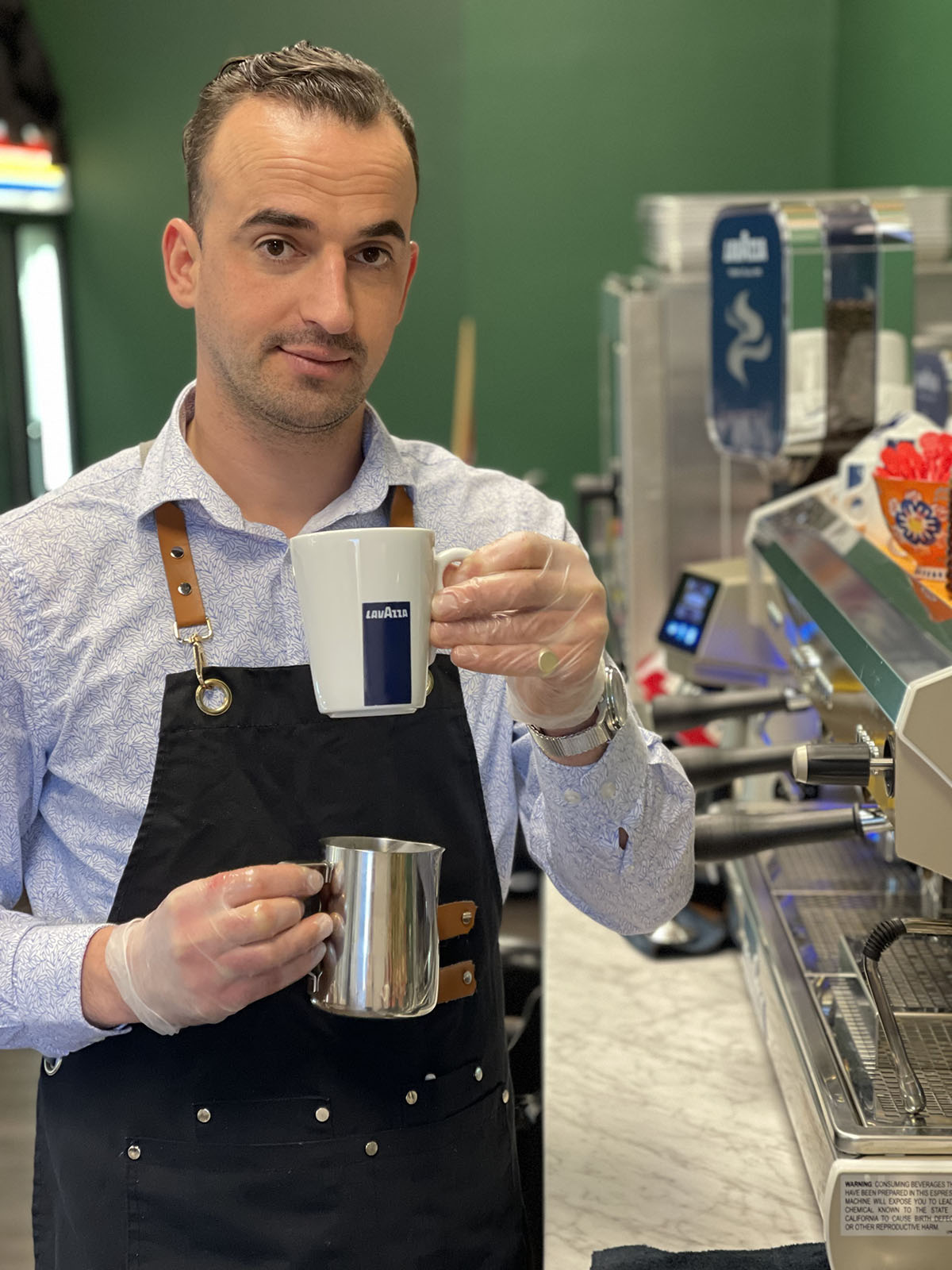 Bruno Muskaj, co-owner of the Coffee Corner on Maumelle Boulevard and its new "branch office," the Italian Coffee Corner in the lobby of downtown Little Rock's Simmons Tower, touts the Lavazza coffee and espresso he serves. (Special to the Democrat-Gazette)