Officer killed during chase near Stuttgart 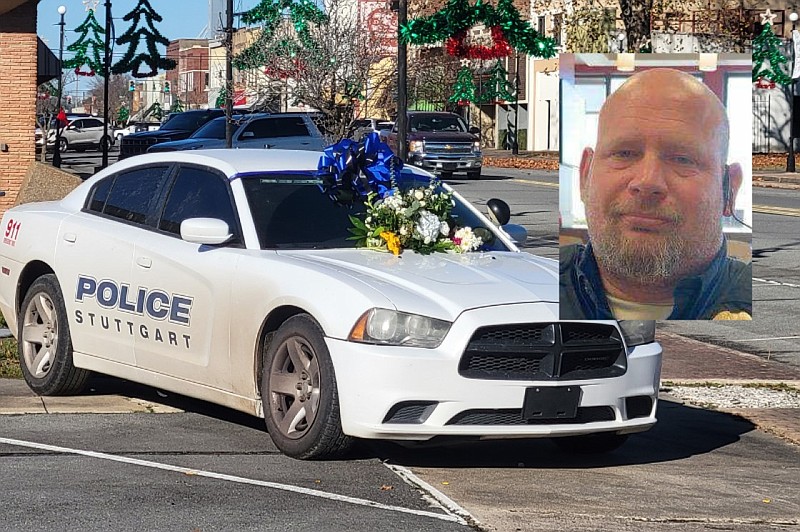 STUTTGART – A four-year veteran of the Stuttgart Police Department was shot to death and a state trooper was wounded after law enforcement officers attempted to arrest a Stone County man following a vehicle pursuit that ended south of the city, according to the Arkansas State Police.

The suspect, identified as Jacob Cole Barnes, 31, of Mountain View, died Thursday morning during an exchange of gunfire with members of the state police SWAT team at a residence just off Yoder Road. A SWAT member sustained a non-life threatening wound, state police said in a news release.

The deceased officer, identified as Sgt. Donald Scoby, 45, was shot while chasing the suspect on foot, according to state police.

State police said Barnes entered a residence at 593 Rieger Road. The home was occupied by a woman who barricaded herself inside and was removed safely by the SWAT team before 7 a.m. Thursday.

"Moments later, Barnes shot a state police SWAT team member who sustained a non-life threatening wound and is being treated at a Little Rock hospital," the state police said in the release. "Barnes was fatally wounded during an exchange of gunfire with SWAT team members."

Some of Scoby's fellow officers, along with Police Chief David Parker, escorted his body to the state Crime Laboratory in Little Rock as part of the investigation, said Eric Mahfouz, public information officer for the city of Stuttgart. Parker was just hired as chief in August.

"I think Chief Parker plans to stay there until he hears something definitive about what happens next in the investigation," Mahfouz said. "Obviously the suspect was killed."

"Character-wise, he was wonderful," Mahfouz said. "You can find that all over. Everyone online who's known him online is just broken-hearted. It's awful."

By mid-afternoon, some officers could be seen going in and out of vehicles parked outside the Police Department headquarters, appearing to process the tragic events of just hours earlier.

An officer in uniform and two other women were seen placing a giant bow and a memorial wreath on the windshield of the cruiser Scoby was driving while in pursuit.

"It was a very traumatic night for the whole department," Mahfouz said. "The mayor was literally listening to the police radio when it happened."

Scoby was "an asset to the city," said Stuttgart Mayor Norma Strabala, adding his death "was a great loss for the city and the community as a friend."

"He always had my back, and I always had his," Strabala said. "You don't find people like that anymore."

Not much about the motivation for the shooting that killed Scoby is known yet, added Mahfouz, who seemed to struggle to find words for the tragedy.

"I can tell you that Scoby would have done the job, even if he knew this is what exactly would happen, and that's what breaks my heart the most," Mahfouz said. "He was not just one of the good ones. He was a model police officer you wish every town could have."

"We ask that the community join us in thoughts and prayers for our law enforcement family in Arkansas County as they process and grieve this great loss," Woods said. "The Jefferson County sheriff's office will lower flags to half-staff in honor of Sgt. Scoby immediately and they will remain at half-staff through the day of interment."

Funeral services for Scoby are scheduled for 1 p.m. Monday at Grand Prairie Center in Stuttgart. Visitation is 5-7 p.m. Sunday at Turpin Funeral Home.

Attorney General and Lieutenant Governor-elect Leslie Rutledge said the death of a law enforcement officer devastates not only the family and community but all of Arkansas.

"I pray for healing and peace for Sgt. Scoby's family, his brothers and sisters in blue, as well as the entire community as they mourn the loss of this public servant," Rutledge said. "Our first responders are the last line of defense, and I could not be more grateful for their service and protection. Please keep the family, the Stuttgart Police Department and the community in your prayers during this time."

The state police Criminal Investigation Division was leading the investigation into the shooting that resulted in Scoby's death. A small portion of Yoder Road from the entrance to Rieger Road to about 400 feet north of the residence was still blocked off by Arkansas County sheriff's deputies by about 1:30 p.m. Thursday.

Both state police and sheriff's officials will offer any assistance to Stuttgart police, Mahfouz said.

"It's a rough one, just being honest," he added.