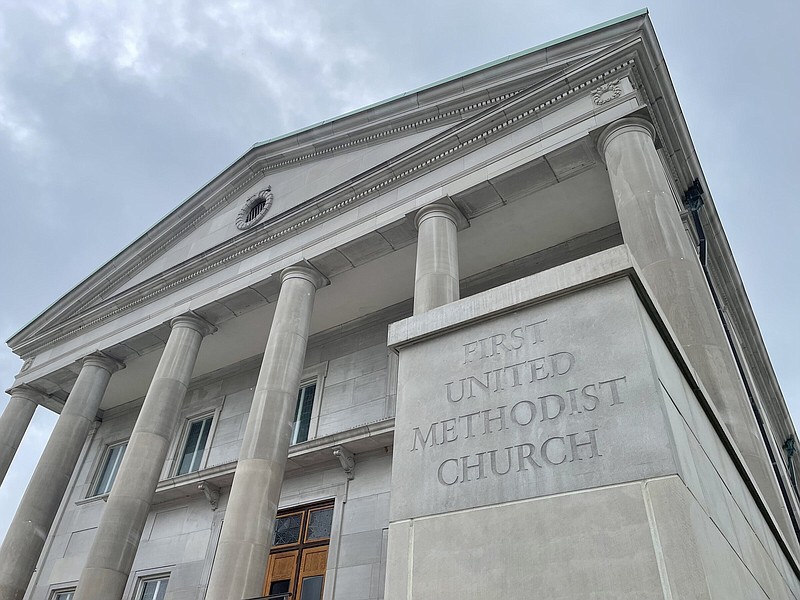 Northeast District Superintendent John Fleming had previously urged the longtime minister, John Miles, not to hold the meeting, warning that the proposed action items were "clearly contrary to the Constitution of the United Methodist Church" and would not be "recognized by the State of Arkansas or the Arkansas Conference of the United Methodist Church."

But the meeting, organized by church members wishing to break away from the denomination, went forward as planned, with those present voting 629 to 9 against remaining with the United Methodist Church. The bylaws and leaders provisions passed by similarly lop-sided margins.

Leaders of Stay UMC Jonesboro, which opposes disaffiliation, were on hand to challenge the legality of the proceedings and observe, but did not cast ballots.

A formal complaint, signed by Fleming and the church's other Arkansas district superintendents, quickly followed.

In a letter to the Arkansas Annual Conference late Friday afternoon, Bishop Gary Mueller said he had suspended Miles "from all pastoral duties effective immediately."

Utilizing a provision in the denomination's Book of Discipline, the Arkansas Conference has also declared "exigent circumstances," Mueller wrote.

According to Paragraph 2501 of the Book of Discipline, united Methodist congregations hold their property, in trust, "for the benefit of the entire denomination."

Under Paragraph 2553, which was added in 2019, congregations were given a limited right to sever ties "over issues related to human sexuality."

Citing "reasons of conscience around issues of human sexuality," Jonesboro First United Methodist Church voted 944 to 412 on July 31 to disaffiliate from the nation's second-largest Protestant denomination, eventually negotiating a disaffiliation agreement with the Arkansas Conference's board of trustees.

The trustees determined, among other things, that Jonesboro had complied with the discernment process and had surpassed the two-thirds vote required to break away.

They also reached a financial resolution, with the Jonesboro congregation agreeing to pay an additional year's tithes (roughly $280,000) and approximately $400,000 to cover its pro rata share of the Conference's defined pension obligations.

Jonesboro members who remain loyal to the denomination challenged the fairness of the process and have continued to gather, meeting for worship at the Valley View School District's performing arts center.

On Nov. 19, at a special session of the Arkansas Annual Conference in Hot Springs, clergy and lay members rejected the agreement, with 254 in favor and 335 opposed to ratifying it.

Jonesboro was one of three congregations that had their disaffiliations vetoed that day; 35 others were approved.

Since then, Mueller and others have urged both sides to use mediation in an attempt resolve their differences.

Saying that he was writing "with a heavy heart," Mueller Friday described the events that preceded Miles' suspension.

"The membership of First United Methodist Church Jonesboro was notified twice that a meeting for church members called by Rev. John Miles for December 15, 2022 was not authorized in accordance with our long-held church structure. Rev. Miles was instructed not to hold the unauthorized meeting, but proceeded to do so. The vote, which purported to adopt new 'bylaws', was in violation of The Book of Discipline and illegal according to Arkansas State law," he wrote.

"I am deeply saddened that we find ourselves in the current situation. No one wins, and we all lose; most of all the Body of Christ and the mission to which Jesus calls us. I want to ask you to pray that hearts of peace will prevail and a positive way forward will be found. While it is a difficult and painful time for all involved, I remain resolute in the hope that is found in the birth of the Christ Child," he added.

In a video posted on the congregation's Facebook page, Miles acknowledged his suspension from ministry but indicated he won't be going anywhere.

"This is all part of a legal process and I just want you to know I'll be here Sunday. I plan to be here for the following Sundays," he said.

"Right now, let's just trust the Lord, but also let's trust our lawyers. They're working through all this and they'll get this settled," he said. "Let's enjoy church. Let's enjoy Christmas. Let's enjoy one another and we'll get through this. Let's just remember to keep putting Jesus first in our lives."

Bill Bristow, an attorney and member of Stay UMC Jonesboro who attended Thursday's meeting, said people booed and someone said "Trip him" as he made his way to the microphone.

Miles' suspension was foreseeable, he suggested.

"I'm not surprised and, surely, given the warnings that had been given by the district superintendent, the pastor's side would not have been surprised by these events," he said.

"The [United Methodist] Church has spoken, and we will see if it becomes necessary for a court to speak," he said.

He predicted the denomination and those loyal to it would weather the storm.

"I can't tell you what the immediate future holds. But I think, down the road, we're going to have a very vibrant and growing and strong United Methodist Church in Jonesboro," he said.