With 780+ species of holly trees, there’s a bright one right for any Arkansas landscape 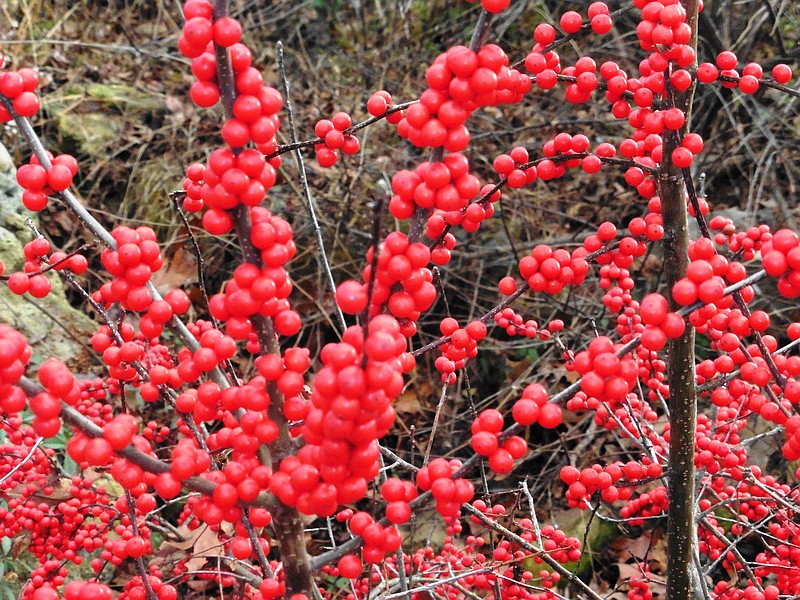 In December, this deciduous holly is ablaze with brilliant berries. (Special to the Democrat-Gazette/Janet B. Carson)

Hollies are a common symbol of the Christmas season and a bright spot in the winter landscape. Many varieties have bright red berries, and the foliage is often used in wreaths and flower arrangements. Hollies are also one of the most popular landscape shrubs in Arkansas.

This diverse family of plants consists of more than 780 species of evergreen plants and 30 deciduous species, so there is a holly that will fit any landscape situation. Whether you are looking for a dwarf foundation plant or an evergreen tree, you can find a plant in the holly, or Ilex, family.

Many people think that all hollies have thorns, but there are many varieties that are totally thornless — including most of our native species. And only a few produce "deadly" thorns — Chinese holly being the worst for those. Many gardeners think the small-leaved, thornless plants in their landscapes are boxwoods, but hollies are much tougher plants than boxwoods.

Besides plants with or without thorns, hollies range in size from a mature height of 18 inches to plants growing 50 feet tall or more.

The plant can be evergreen or drop its leaves in the fall; and the foliage can be green, blue, red or variegated.

There are also a variety of leaf shapes, some spiny, some not, with berries ranging in color from reds to yellows, orange and even black.

The mature shape of the plant can vary from columnar to rounded forms, pyramidal shapes or weeping forms.

Hollies are used as stand-alone trees, foundation plantings, screens or hedges, mass plantings or as an accent plant.

WHERE BERRIES COME FROM

Most Hollies are dioecious, which means there are separate male plants and female plants.

Female plants can produce berries if there is a pollinator nearby, while male plants supply the pollen but will never have fruit.

While most of us want the berries, we won't see any unless there's a male plant in the vicinity to provide pollen for the female holly, and they have to be in bloom at the same time. Bees and other insects pollinate the flowers. "In the vicinity" is considered within two miles, although closer spacing of no more than 30-40 feet would produce more berries.

In general, growing hollies is quite easy. Most holly cultivars require well-drained soil and prefer full sun, although they will tolerate partial shade. Many hollies will grow well in the shade, but rarely will they flower or set fruit in heavy shade.

They do best in a slightly acidic soil, and will grow in average soil, but will thrive in soil that has been amended with organic matter.

Hardiness will vary within species, but most will fare well throughout the state.

When choosing hollies for your landscape, consider how the tree will be used. Do you want a foundation planting, an accent plant, a hedge, a container plant or an evergreen tree? Then start considering your options.

Know the anticipated mature height and choose accordingly. If you only need a plant that at maturity is 3 feet tall, choose a dwarf form, and annual pruning chores won't be needed.

If you want a low-growing foundation of green for your landscape, the most commonly used plant is the dwarf yaupon holly – Ilex vomitoria Nana or Dwarf. This plant could eventually grow to 4 feet, but it is slow growing, and so is more commonly seen as a 3-foot mound or meatball in the landscape.

Other low growers include the Japanese holly, Ilex crenata Helleri or Soft Touch or Tiny Tim. Japanese hollies are more sensitive to poor drainage problems and typically have more problems than the yaupon hollies.

A popular container holly with a straight, narrow column is called Sky Pencil.

If you are looking for a larger mature plant, there are some selections in the Japanese holly family, including Compacta and Convexa. Compacta grows to 6 feet in height, while Convexa can get up to 9 feet tall.

In the Chinese holly family, look for dwarf Burford holly or needlepoint holly.

There are also blue and red hollies on the market.

The blue series called Ilex x meserveae struggles a bit in the heat of Arkansas summers, and would benefit from a bit of shade in the heat of the day. The blue group grows 6-12 feet tall and gets the "blue" connotation from a bluish look in winter. They are a more popular group of shrubs in the northern climates but also will do well in the right location here.

If you are looking for a hedge or tall accent plant, you have several good options, including the standard yaupon holly, Nellie R. Stevens holly, Fosteri holly or Savannah holly. Standard Burford holly will also make a good tall accent plant or hedge.

And the tallest of them all includes the American holly or English holly. The American, being native, is an easier plant to grow, with the English holly sometimes struggling in our hot, dry summers. Be aware, these last two plants mature to be quite large, up to 50 to 60 feet in height.

LEAVES ON OR OFF

While many people prefer evergreen plants, don't overlook deciduous holly, which can be the star in the winter landscape.

Both Ilex decidua and Ilex verticillata provide wonderful winter color. When the foliage falls off, you are left with branches loaded with bright red berries, all winter. Some good selections include Warren Red, Council Fire and Winter Red.

Visit local nurseries and garden centers to see what is available -- you will never have 780 options, but most nurseries do carry a good selection of hollies, and new varieties hit the market every year.

Most of the hollies sold in Arkansas are container grown, although larger specimens can be found that are balled in burlap. Container plants can be planted any month of the year, but for ease of transplant and care, avoid the extremely hot summer months, unless you want to be attached to a hose.

Hollies are relatively easy plants to grow in Arkansas, and that is the reason you see at least one in almost every landscape here. The versatility of this family offers selections for almost every site, and they are easy to maintain. But do your homework, it still comes down to the right plant for the right location.

Gallery: Hollies for all seasons