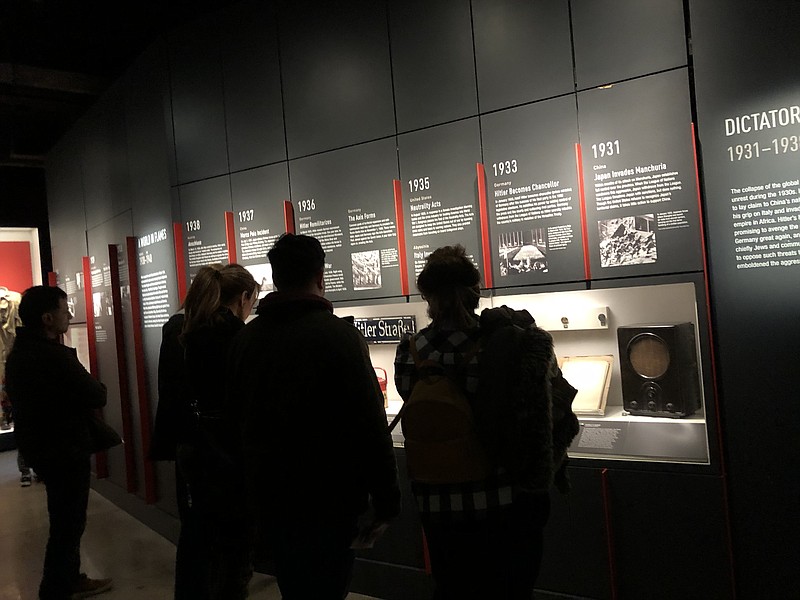 This year saw the 81st anniversary of the Dec. 7, 1941, surprise attack by the Japanese on the U.S. Naval base at Hawaii’s Pearl Harbor. President Franklin D. Roosevelt declared it “a date which will live in infamy.”

It was the attack that solidified the role of the United States in World War II . But said attack, and the war itself, have lived in more than infamy. They have lived as a sober lesson that evil prevails when good people do nothing. They have lived as a testament to the fortitude, sacrifice and indomitable spirit of “The Greatest Generation” — those who fought to preserve democracy — and the extent to which both the good, not just the evil, will go to achieve their desired ends. They have lived as a showcase of the long discounted richness of America’s racial and cultural diversity. For those who are into tools of military might, the war has lived on in the technological advances that emerged during it (and have emerged since).

All of this is showcased extensively at the National WWII Museum.

Formerly known as The National D-Day Museum and founded by Stephen E. Ambrose and Gorgon H. “Nick” Mueller, the museum is located in New Orleans’ Warehouse District. As its mission statement reads: “The National WWII Museum tells the story of the American experience in the war that changed the world — why it was fought, how it was won, and what it means today — so that all generations will understand the price of freedom and be inspired by what they learn.”

According to the museum website and other online sources, the facility opened on D-Day 2000; three years later it was designated by Congress as the official WWII museum of the United States. Designated as a Smithsonian Institution affiliated museum, it boasts “more than 250,000 artifacts and over 9,000 personal accounts supporting major exhibits and research.”

My visit to the museum came during a day trip from Lafayette, La., to New Orleans (two hours and some change each way, on Interstate 10 and U.S. 90) with my husband as well as my mother-in-law, whom we visited in Lafayette for Thanksgiving.

Though some condensation is inevitable when it comes to chronicling this particular piece of history in an exhibition, this museum does a compelling job of filling in for countless history classes whose students either skipped them or fell asleep during them. With its “immersive exhibits” and “multimedia experiences,” it also does an admirable job of creating enough atmosphere to draw in those whose parents and even grandparents weren’t so much as a twinkle in a mom’s or dad’s eye at the time the war took place.

The National WWII Museum is made up of a handful of sleek, silver-gray, understated and interconnected structures that themselves command an atmosphere of solemnity and reflection. Building No. 1, the Louisiana Memorial Pavilion, houses the main entrance, where tickets are bought, and the first exhibit, “The Arsenal of Democracy: The Herman and George R. Brown Salute to the Home Front.” A skywalk leads to Building No. 2, Solomon Victory Theater, which features “Beyond All Boundaries,” a 4D “experience” narrated by Tom Hanks.

Building No. 3, “Campaigns of Courage: European and Pacific Theaters,” is divided by floors: The second-floor galleries tell the “Road to Tokyo” story, leading to Japan’s surrender to the Allies; the first-floor galleries tell the “Road to Berlin” story, which leads to Germany’s surrender. Building No. 4, Hall of Democracy, holds featured exhibits. Building No. 5, the U.S. Freedom Pavilion: The Boeing Center, features war vehicles and vintage aircraft (such as the B-17E Flying Fortress My Gal Sal), a history of war machines and displays of uniforms worn by all branches of the military. It also houses the museum’s Institute for the Study of War and Democracy and the WWII Media and Education Center.

“The Arsenal of Democracy,” with its nine galleries, sets visitors up for the war with the notable section “Gathering Storm.”

“After playing a crucial role in winning World War I, the United States and its citizens looked forward to building a safer, more democratic world,” reads the introductory copy, which goes on to explain why that wasn’t to be: “The war had disrupted the world economy … which led to severe political turmoil. In a number of countries, anti-democratic, militaristic regimes seized power.” A timeline displays Japan’s invasion of Manchuria (1931); Adolf Hitler becoming chancellor (1933); the Neutrality Acts passed by the U.S. Congress and Italy’s invasion of Abyssinia (both 1935); Hitler’s remilitarization of Germany and the formation of the Axis (both 1936). A video tells the story of the trouble brewing; how the Versailles Peace Treaty “causes outrage in Germany — and a lust for revenge.” It quotes Hitlers’s anti-Democracy view and shows the Nazis’ growing death-grip on Europe. The story goes on.

The museum makes major use of films — documentary, newsreel and battlefield footage and gets creative with the screens — massive, compact and in between — on which said films are shown. In the exhibit that tells the story of Japanese-Americans being forced from their homes and shipped off to internment camps, for instance, a collection of antique-looking suitcases, such as those these Americans had to pack for their relocation, serve as the screens.

Personal accounts and artifacts also tell the stories: Uniforms. Gas masks. Ledgers. Medals. Personal effects. The newspapers of the day, their giant headlines demanding people read all about it, as well as magazines. Games and puzzles of the era.

I was taken back to my history classes that revealed how the U.S. gradually became involved in the war, including the Lend-Lease Act; the exhibit included polls taken at the time showing Americans were overwhelmingly against declaring war on Germany and Italy and against risking going to war to help the U.K. America’s entry into the war was, of course, decided by Pearl Harbor. The exhibit dedicated to the attack is a visceral attention grabber, showing footage of activities going on at the base before the attack and drawing the viewer in to grieve over the losses sustained on that day nearly a century ago. But it also shows how the attack on Pearl Harbor didn’t demoralize the United States but instead “brought national unity” as people flocked to enlist and went to work at defense plants.

The museum has also done a notable job of creating exhibit sets that look like elaborate play sets … from jungle, desert and snowy landscapes depicting battle locations, to a wartime American home complete with victory blanket mounted on the wall and that all-important radio to listen to President Franklin D. Roosevelt’s Fireside Chats.

Stories big and small, roads well traveled and less traveled, are told in an attempt to make this visual history textbook complete. Large, imposing portraits, as well as stories, of the movers and shakers on the Allied and Axis sides — Roosevelt, British Prime Minister Winston Churchill, Hitler, Italy’s dictator Benito Mussolini, Japanese Emperor Hirohito — contrast with “personal stories,” including tributes to Pearl Harbor hero Dory Miller, and Seaman First Class James Fahey, whose secret three-year diary revealed a sobering account of life for troops in the Pacific. Museumgoers will live the stories of the major events of the war, events most of us have heard of … the Bataan Death March. The battles of Corregidor, Guadacanal, Midway, Iwo Jima, The Bulge. The Normandy Invasion. The Battle of Berlin, Hitler’s suicide and Germany’s surrender. The race to build a bomb, the Manhattan Project, the development of the bombs that would fall on Hiroshima and Nagasaki, Japan, and Japan’s surrender. The atrocities that marked this war, most notably the Holocaust … the extermination of 6 million Jews in Nazi Germany. And they’ll learn some of the lesser-told stories of entities that played key roles in the Allied effort. Having heard nothing about the role of the Merchant Marines in the war, I got an education via the Ralph E. Crump, LTJG, USNR, US Merchant Marine Gallery. The Merchant Marines were responsible for transporting weapons, men and other cargo to U.S. troops overseas … and paid the price.

Ancillary information is sprinkled liberally throughout the exhibits and speaks to the museum’s attempt to show that the World War II story is one made up of diverse people whose treatment laid bare the discrepancy between what America was “preaching” and what it was practicing. The “United but Unequal” information panel tells of how “war highlighted the deep prejudices that affected millions of Americans at home” and brought the question of “Why did the country deny so many citizens the same rights for which its soldiers were giving their lives overseas?” along with showing Black soldiers’ determination to win a “‘Double Victory’ over Axis tyranny and over racism at home.” There are nods to not only the Black troops that served (Tuskegee Airmen, etc.) but to Hispanic, Indigenous and Japanese-American soldiers, and, of course, women who served in the U.S. military. (A wall of pin-up-girl images is included as a display.)

And the museum gives a liberal nod to engineering and technology; war vehicles showcased include the flat-bottomed Higgins boats that stormed the beaches in Normandy and were manufactured there in New Orleans.

Visitors are encouraged to participate in such interactive pursuits as picking up a card bearing the dog tag of a real World War II participant and using that tag throughout the museum to listen to that person’s story.

Prompted to multiple head-shakings, and brought almost to tears of grief as well as joy, I was struck by the sheer magnitude of what this war cost the United States and the other countries represented in it. Throughout the museum, in fact, it’s the posted totals that are among the most compelling: 16 million Americans served in uniform during the war, including more than 1,200,000 Blacks, more than 44,000 Indigenous people, more than 33,000 Japanese-Americans (while more than 110,000 were forced into incarceration camps); and 350,000 women (who weren’t just nurses and typists but who “drove trucks, flew planes and repaired engines.” Portraits and short stories of various members of these troops are posted).

Outside the museum complex can be found “The Road to Victory: The Final Mile,” victory pavers by which people have honored the legacy of their war heroes, and a bench bearing a sculpture of, and quote by, FDR.

We enjoyed our food — which included that Louisiana delicacy, the shrimp po’boy — at The American Sector Restaurant & Bar, a museum eatery and drinkery that sets the wartime atmosphere with reels of U.S. celebraties who entertained the troops at USO shows (think Bob Hope and Lena Horne).

The movers and shakers behind the museum have made an admirable attempt to be thorough and objective. But, again, it’s impossible to tuck all that was World War II into a museum, and even one of this magnitude has limitations to the in-depth telling of many of its stories. The possible upside? The stoking of a desire of the visitor to delve into books or other sources to learn more.

I regretted, and would advise against, seeing the National World War II museum only via a day trip. (My mother-in-law missed some of the exhibits, as she became tired.) This is a place that commands multiple visits during a multi-day trip to New Orleans. The museum does offer $7 second-day admission tickets but would possibly benefit even more from a discounted ticket package for additional days.