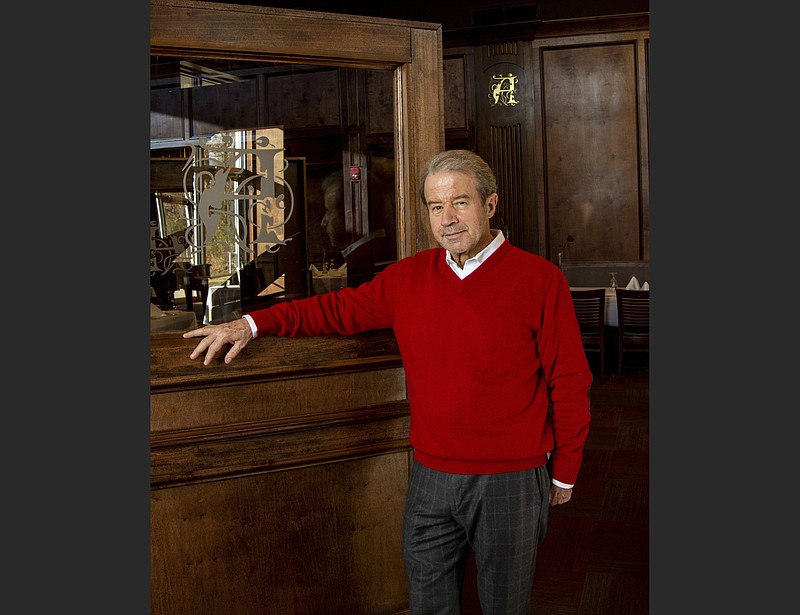 Jerry Barakat is opening an interstitial restaurant called ETC ... between his Arthur's Prime Steakhouse and his Oceans at Arthur's on Chenal Parkway. (Democrat-Gazette file photo/Cary Jenkins)

Jerry Barakat is in the process of turning the interstitial space between his two restaurants at 16100 Chenal Parkway, Little Rock — Arthur's Prime Steakhouse and Oceans at Arthur's — into a third establishment, which he calls ETC ... (in the logo, the "E" is a fork).

The centerpiece will be a waterfall fountain and a huge bar; menuwise, he will incorporate the concepts of several of his bygone restaurants, including Gaucho's Grill (Brazilian churrascaria-style, focusing on various cuts of grilled meat on skewers), Amalfi (Italian; Barakat is promising a huge pizza oven), Jasmine (Asian-fusion) and Blue Agave (Mexican-Caribbean), with an Asian-fusion robata (small-plate) menu similar to the one he currently offers at Ocean's and also the one at competitor Kemuri. Plus a selection of pastries and gelato for dessert.

Barakat says patrons will start out with a basic plate and can fill it with food from one concept or all of them. He's fully enclosing the space, which has previously had problems with exposure to the elements, and which will now be fully heated or cooled (depending on the season). Look for it to open sometime in January or February.

The bill of fare at ETC … will feature menu items from several of Jerry Barakat’s previous restaurant concepts, including (from left) Blue Agave, which offered a bouillabaisse in 2006; Amalfi, which served a tiramissu in 2008; and Gaucho’s Grill, where servers brought meat and pineapples to tables on skewers in 2010. (Democrat-Gazette file photos)
G.O.A.T. Indian Restaurant, 11321 W. Markham St., Little Rock, is in the process of opening — they're currently taking to-go orders and hope to have the dining room open on Tuesday. The revolving door space, in the same strip center as Wingstop and Kebab House, most recently housed Dockside Bar & Grill. The menu is mostly North Indian. Hours are 11 a.m.-9:30 p.m. The phone number is (501) 379-9116; a website and Facebook page are pending.

The first North Little Rock location of Chipotle Mexican Grill opened Wednesday at 3917 McCain Boulevard, in the shadow of McCain Mall. It is also the first location, we are told, to feature a Chipotlane, a drive-thru pickup lane that lets customers pick up digital orders without leaving their cars. Promotionally, the first five people in line will receive complimentary Chipotle Goods merchandise and those who sign up for Chipotle Rewards will receive free chips and guacamole after their initial purchase. Hours are 10:45 a.m.-10 p.m. daily. We're still waiting word on a phone number. chipotle.com.

Abbi's Teas & Things, Abbi Siler, proprietor, will set up a tea stand, 10 a.m.-2 p.m. Dec. 31 in front of Old Mill Bread Bakery & Cafe, 12111 W. Markham St. at Bowman Road, Little Rock, vending loose-leaf teas "& hot tea, too!" Inside, you can buy what Siler described on Facebook (facebook.com/events/533055592102972) as "those yummy cranberry pecan scones & brownies y'all used to love at the tea house" when Siler operated it on Kavanaugh Boulevard in Hillcrest. Siler shut down that operation in March, but pledged at the time that "This isn't goodbye. I'm NOT going out of business, I'm just 'shifting my sails,' as Mom says." Plans were to create a small manufacturing space where Siler could house and expand her online and blending operations and eventually a smaller retail space.

Hibachill, a food truck focusing on hibachi-grilled dishes and Asian-fusion side items, hints on a post on the NLR Eats Facebook page (facebook.com/groups/nlreats) that "We will have some amazing news starting 2023 — We found a permanent location." Presumably that's for the food truck and not a new indoor space, since a response to a patron mentions that "we will still move around for events but it's so nice to have a regular spot."

Ricardo Alvarez, who worked for the west Little Rock outlet of Genghis Grill, 12318 Chenal Parkway, in 2012, is now its owner after signing a three-unit franchise agreement with the Irving, Texas-based chain. He expects to open the other two locations over the next two years; in the meanwhile, the existing store is set to undergo remodeling. Alvarez and his wife, Elsie, who also worked at Genghis Grill in 2012, "are also multi-unit owners of another franchise brand," according to a news release, which does not identify the franchise. However, a little digging reveals Ricardo Alvarez as the owner of Caked Up, 5621 Kavanaugh Blvd. in Little Rock's Pulaski Heights, and a Ricardo and Elsie Alvarez have shown up as owners of the Smallcakes Cupcakery, 4909 Arkansas 5 North, Bryant.

Here is our admittedly limited list of places that will be open on Christmas Eve and/or Christmas Day. Christmas Eve being a Saturday this year, more places are likely to be open than otherwise might. Many Asian and hotel restaurants open on Christmas Day; just because a restaurant is not listed here does not mean it isn't open. Call ahead. And (small print) our listing of an establishment does not constitute an endorsement, nor does the absence of an establishment from this list constitute anything other than we were unable to chase down details.

Our information comes either from restaurants or from various forms of social (and/or anti-social) media, so it may not be 100% accurate. So we definitely recommend double-checking — we're supplying contact details where we have them — before venturing out anywhere to avoid disappointments; most, if not all, of these places strongly recommend, even when they do not insist upon, making reservations.

◼️ Denny's, usually open 24/7, including Christmas Eve and Christmas Day, but it's a good idea to check ahead.

◼️ Domino's Pizza, some outlets may be open; hours may vary.

◼️ McDonald's, open Christmas Eve for sure, but Christmas Day is not guaranteed; hours may vary.

◼️ Starbucks, some outlets may be open.

◼️ Waffle House, of course, is open 24/7/365, but staffing problems could curtail hours.