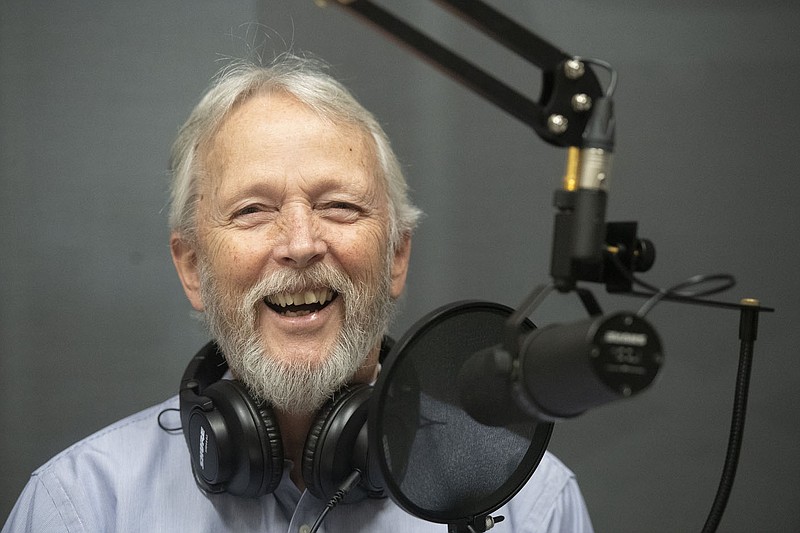 Rick Stockdell, seen here Wednesday Dec. 6, 2022, will officially retire from the University of Arkansas on December 31st. He is currently working on the history of radio at UA and made some fascinating discoveries. Visit nwaonline.com/photo for today's photo gallery. (NWA Democrat-Gazette/J.T. Wampler)

Earlier this month, just a few days before Rick Stockdell retired from his post as professor, Lemke Journalism School's director of Undergraduate Studies and head of the broadcast sequence at the University of Arkansas, a few lone boxes stood stacked up in one corner.

They didn't look like much, but the small containers held nearly the entire history of KUAF, the university's National Public Radio station, the very one that Stockdell built and guided as station manager for 34 years.

His first order of business as a brand-new retiree is to turn the amalgam of those boxes, along with his personal experiences -- which span all but seven years of the station -- and additional research and interviews into something, perhaps a book about the history of radio at the University of Arkansas.

"When I got here in 1980, there had hardly been any radio on campus; we were kind of behind other colleges and universities that had had it for several years," Stockdell says. "All we had was a 10 watt radio station."

At least, that's how it appeared when he arrived to Fayetteville. But when he retired as KUAF station manager in 2019 and had a little extra time on his hands, Stockdell found there was more to the story.

In the UA Mullins Library Special Collections archives, Stockdell found evidence that the university's very first radio station debuted in 1897. It had a transmitter and receiver that used wireless technology to send Morse Code messages.

In terms of technology for the time, this was actually quite cutting edge, given that its inventor, Guglielmo Marconi, had only put his on air the year before.

With the help of a couple other campus resources, Stockdell came across a photo of what must have been the transmitter building, something as small as a shed just beyond Carnall Hall at the corner of Maple Street and Arkansas Avenue.

The next iteration of on-campus radio was KUOA, an AM station that formed during the golden age of radio for the U.S. at the beginning of the 1920s, and lasted for roughly a decade. It didn't survive the Depression era. Instead, it was sold to John Brown University, but not before the UA's longest running president, John C. Futrall, had some fun with it.

"He was really involved, there's lots of letters and memos and correspondence from and to him about the radio station," Stockdell says. The UA campus had 2,000 students then and they, along with their faculty, listened to regular updates from Futrall via the radio station.

The 1950s brought the second attempt at a traditional radio station, this one a closed-circuit one wired into the dormitories. Stockdell doesn't know where the studios were located, but each dorm had a transmitter, and he suspects they were connected by telephone lines.

An Arkansas Traveler article of the time also mentioned a station, "WHOG," set to go on air, but there wasn't much to report after that, making it likely an unlicensed operation.

Stockdell's own first experience working for a radio station was for closed circuit radio. That piqued his interest in solving the mystery of why the station that began in the 1950s didn't make it.

His best guess? It wasn't tied to an academic unit that would keep it going as students went on to graduate, and it wasn't connected to the primary arm of universities that tended to use them most -- schools of agriculture trying to reach rural communities with weather advisories and more.

Even the landscape of the area could have had a hand in it, because "with hills, how far can the signal go?"

Growing up in a small town northeast of Kansas City, Rick Stockdell was an avid radio listener because it delivered more of his true love of the time -- sports coverage of the As, the Chiefs and one NFL game a week. After a broadcast, Stockdell would reenact the game with a neighbor kid and a wiffle bat and ball.

"He'd bat, I'd pitch and call the plays, 'And the pitcher Stockdell winds up and throws a curve ball!'" Stockdell recalls. "I'm guessing that's what got me interested in radio."

Next he joined the junior high and high school newspapers, publications that students saw a couple times a semester or so. At Northwest Missouri State, he joined the radio program. By October of his freshman year in 1969, Stockdell had his own radio show, playing music and reading the news.

The school had one of the first NPR stations in the country, and Stockdell went to work on it with an early morning show, reading the news every hour on the station manager's three-hour block and reading news on the weekends.

"I never thought about journalism; I was just going into radio," Stockdell says.

After school, he spent four years in commercial radio and decided public radio was more his style. But those higher jobs required a master's degree, so off to Kansas State he went, following a program that had free tuition for teaching assistantships.

During Stockdell's last semester, one professor went up for tenure and didn't get it, so he covered what would have been his spring Intro to Radio class.

"It was not easy, but I realized I could work at this, I could do this if I wanted to," he says. "But I really wanted to run a radio station."

Stockdell moved to Washington, D.C., working as an independent correspondent, first for radio segments in New Zealand and Montreal, but as he became better connected, he was aired for more U.S. news talk stations.

Then the University of Arkansas called looking for someone to teach broadcast journalism, be a faculty adviser and most importantly take charge of a 10 watt radio station.

Rick Stockdell came to Fayetteville to build an NPR station, which was a slow process. The first thing he did on his arrival was to increase the station's power from 10 kilowatts to 100 to ensure the signal could reach all over town.

A year later, in 1981, Stockdell called then-freshman Kyle Kellams into his office to talk about bringing NPR to Fayetteville -- but he'd never heard of it.

"He said 'Maybe someone like you could stick around after school'" to run it, Kellams says. "I remember thinking 'I don't know what NPR is; I'm not going to be in Arkansas after this, I'm leaving; and I don't know if I want to be a news director. But here I am, 41 years later."

Clearly, all those things came true.

Stockdell has an innate ability to find the intersection of what a person is good at and what he loves, Kellams says. He does that through encouragement and his knack for finding good people and letting them do their work.

It was because of Rick that Kyle applied to be student station manager. Otherwise, he wouldn't have believed he could do it, Kellams says. During those years, Stockdell was always ready to answer a question, give advice and guidance when needed.

In 1985, after about four years of Stockdell drumming up interest at Rotary Clubs and through university officials, traveling out to neighboring towns, filing legal paperwork, dealing with the Federal Communications Commission and continually increasing the wattage of the station, KUAF got NPR programming. Kellams still distinctly remembers the first time they ran "All Things Considered."

"One thing about (building) it was that Rick has this patience," Kellams says. "He knew it wasn't going to happen over night."

Stockdell often took the less glamorous parts of the job but joked he would love to trade places with Kellams. After Kyle's college graduation, he spent a couple years working elsewhere, but Stockdell soon brought him back and began to build up the staff needed for an NPR station.

Kellams had been on board less than six months when Stockdell floated the idea of him taking over a news magazine show, "Ozarks at Large," which had been done by a couple of volunteers to that point. At first he trusted Kyle to do 30 minutes once a week, then one and two hour shows. Next it moved to twice a week, until finally Stockdell asked what it would take for it to be a daily production.

"There just aren't many stations our size that do a show like ours, (but) Rick had trust and professional curiosity and accepted my assessment," Kellams says. "We didn't know what we were doing. ... I was probably in over my head, but it worked. Rick said, 'Let's try it out, let's do it,' then gave me support, and we figured it out together."

The years since gave him lots of experience working alongside a "very good radio programmer" who sometimes had to make tough, unpopular decisions to keep the station financially strong and independent, Kellams says. Stockdell saw the station through a few moves -- from the little white building on Duncan Avenue to the location on Dickson Street that was demolished to make way for the new nanobuilding and finally led the capital campaign to get them where they are today in the Lynn and Joel Carver Center for Public Radio on Mountain Street.

Before leaving his post as station manager, Kellams says, Stockdell made sure they had the radio tower paid off completely so the new manager wouldn't have to pick up that task.

When Larry Foley, professor and chairman of the School of Journalism and Strategic Media at the University of Arkansas, met Rick Stockdell in 1993, he was interviewing for a post as journalism professor.

"I kept thinking, 'What a really good, fun guy he would be to work alongside,'" Foley says. "When we met, I had no idea at the time that we would become such close friends and work so closely together."

Not long after Foley was hired, Patsy Watkins tasked the two of them with finding the next broadcast faculty member, and they hashed out the decision over a bucket of beer at a local bar. That night led to them hiring Dale Carpenter. For several years after, the three of them would make up the school's broadcast department.

Watching Stockdell build up KUAF inspired Foley to raise money for a student media center and Larry sought his advice throughout the process of creating UATV, a student-run TV station on campus.

"Knowing what he did, he told me 'In my experience, you can do whatever you want at UofA as long as you're not looking for money," Foley says. "That almost sounds silly, but it's not really."

UATV began in the fall of 1996 with no funding, only approval for a few work/study positions to run tapes.

"It was good advice," Foley says. He employed it again when he took over as chairman and helped move the journalism instruction from a department to a school. That kind of quiet wisdom was just the guidance he needed as a faculty member.

"Rick is just himself, he's easygoing, doesn't get rattled, connects with students and colleagues and is a great confidant," Foley says. "He's just a quality person in every regard." 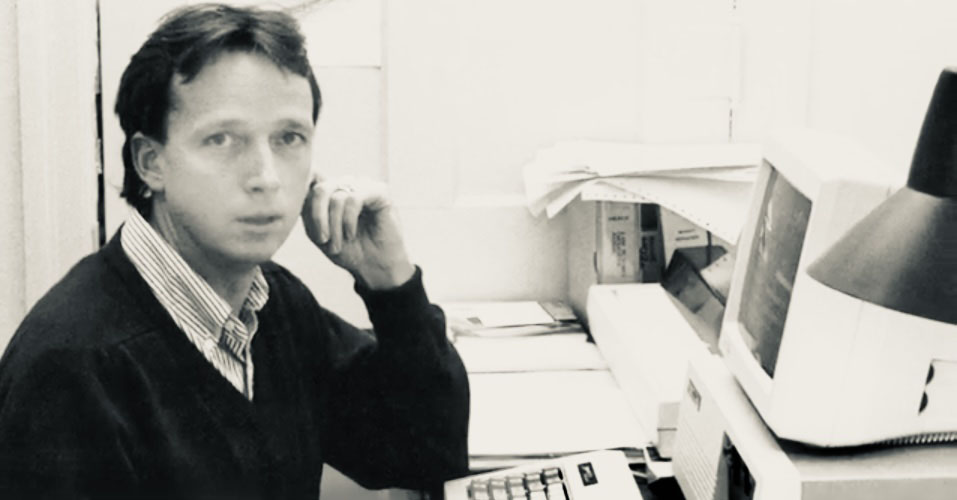 A young Rick Stockdell is pictured in his first office in Kimpel Hall soon after his arrival to the University of Arkansas. Stockdell was a radio correspondent in Washington, D.C., when he got hired as a faculty adviser and to take over a 10 watt radio station in the Ozarks. (Courtesy Photo/Larry Foley)