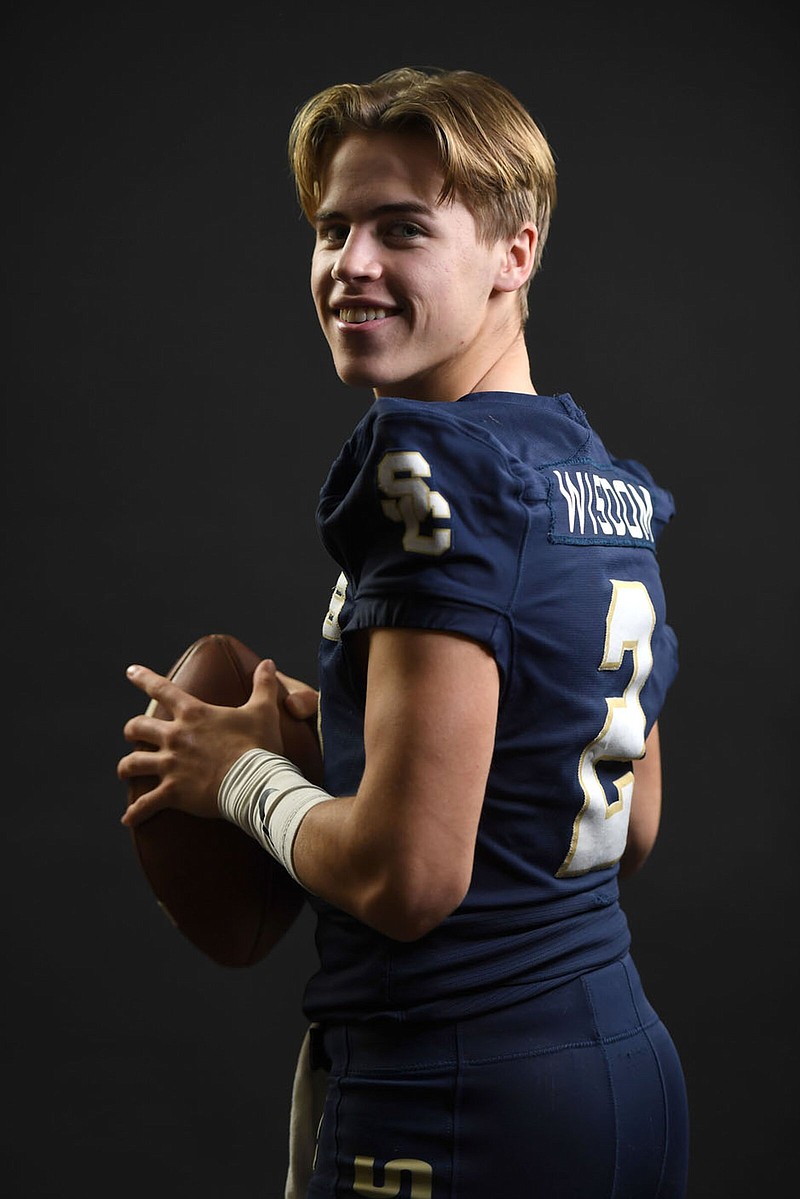 PLAYER OF THE YEAR

THE SKINNY Led the Saints to three consecutive state championship game appearances, winning the 4A state title as a sophomore. … Directed an offense that compiled 7,180 yards and 98 touchdowns in a 12-2 season that included a 5A-West Conference title and a runner-up finish in its first season in Class 5A. … Wisdom is one of just two quarterbacks in state history to run for 1,000 and pass for 2,000 for three consecutive seasons. … As a senior, Wisdom was 203-of-321 passing for 3,178 yards and 35 touchdowns with 11 interceptions. The dual-threat quarterback rushed for 1,454 yards (9.4 ypc) and 20 touchdowns. … The three-time all-state selection completed a stellar career with more than 8,000 passing yards and 3,000 rushing yards. … Has not decided on where he will play in college, but has taken an official visit to West Point.

THAT’S WHAT HE SAID “It’s crazy to think about it because there have been so many great quarterbacks in this state. And now, for me to be the leader in that statistic, it’s kind of crazy to think about. I think moving up to Class 5A, it made us work harder every single day to get ready for the harder competition and teams we’d never played against. I think going with that mindset helped us. It was always my goal to be one of the best quarterbacks to ever come through Shiloh Christian. To be able to accomplish that and reach my goal has been awesome.”

COACH OF THE YEAR

THE SKINNY Has led the Saints to four consecutive state championship game appearances, winning the Class 4A state championship in 2020. … In their first season in Class 5A after bumping up from 4A based on the Competitive Equity Factor, Conaway led the team to an undefeated run through the 5A-West Conference and a runner-up finish in the 5A state championship game. … Before the loss to Little Rock Parkview in the title game, the Saints had reeled off 12 straight wins after falling to Class 6A Little Rock Christian in the season-opener. … Directed the state’s highest-scoring offense that compiled more than 7,000 yards and 98 touchdowns in 14 games. … Is 98-23 as the head coach of the Saints.

THAT’S WHAT HE SAID “I think when we set our sights on 5A, we knew we were going to have to raise our level of competitiveness, and I think our staff and our coaches met that expectation well. I don’t know that we necessarily changed anything, but we just had a different mindset that we were all going to have to pull the rope a little harder and do some things a little more efficiently, probably prepare some really younger guys that maybe might not be ready because we knew we were going to have to have some depth. I was very pleased with how the team just played so competitively week after week. I think they got better every single week. And we stayed healthy. When you’re healthy and you catch some breaks, it’s easy to have the kind of run that we did.”

OFFENSIVE PLAYER OF THE YEAR

THE SKINNY Became the ninth player among the state’s largest classification to run for 1,000 in three straight seasons. … Earned all-state honors after he ran for 1,541 yards and 25 touchdowns, giving him 4,073 yards and 63 touchdowns in his three-year career. … Had season-highs of 34 carries against Conway and Bentonville West, 221 yards rushing against Bentonville West and 4 touchdowns against Conway. … Scored touchdowns four different ways this season — rushing, receiving, a kickoff return (vs. Springdale Har-Ber) and a fumble recovery (vs. Rogers Heritage). … Signed a national letter of intent to play football at Illinois State, where he will attend classes in January after graduating from Bentonville last week.

THAT’S WHAT HE SAID “As far as a season, this is what I really needed to go from high school to college. I really learned a lot about this season. A few plays I’m going to remember is beating Fayetteville in overtime. That loss last year really hurt me because I didn’t think we would lose. That touchdown in overtime really capped off me going against Fayetteville. Beating [Bentonville] West again, I liked that, and it was fun. And getting my team those last few yards that we needed to get to get Logan Tymeson in range for that game-winning field goal, that was probably my favorite drive of my senior season.”

DEFENSIVE PLAYER OF THE YEAR

THE SKINNY Senior linebacker and team captain for Fayetteville team that finished 7-5 overall and 5-2 in 7A-West Conference play. …. Three-year letterman and two-year starter for Bulldogs. …. Led Fayetteville with 109 tackles as a senior. …. Added 16 tackles for lost yardage, including 6 1/2 sacks, with two forced fumbles. Provided one of the season’s highlights when he returned his only interception 85 yards for a touchdown against Fort Smith Southside at Reynolds Razorback Stadium. …. Son of University of Arkansas Athletic Director Hunter Yurachek. ….. All-state and all-conference player who carries a 3.8 grade point average as a senior. …. Committed to continue his college football career at Wake Forest.

THAT’S WHAT HE SAID “That interception return was my favorite highlight because I had a 98-yard interception return last year called back because of a penalty. To do it in that stadium with my mom and dad there and, in growing up around athletics all my life, was pretty special.”

NEWCOMER OF THE YEAR

THE SKINNY Junior quarterback who led Elkins to an overall record of 10-2 and 7-0 in the 4A-1 Conference. ….. Named after his great great uncle, Dizzy Dean, a Hall of Fame pitcher who starred with the St. Louis Cardinals in the 1930s. ….. Completed 205 of 280 passes for 2,842 yards and 37 touchdowns with only 5 interceptions. …. Also ran for 115 yards and 4 touchdowns on 56 attempts. …. Completed 90 percent of his passes (20 of 22) with 4 touchdowns in a 77-20 victory over Lincoln. …. Threw for at least four touchdowns in five games this season. …. Led Elkins to quarterfinals of Class 3A state playoffs, where Nashville converted on a 2-point attempt to eliminate the Elks 63-62. …. Played at Greenwood before moving to Elkins.

THAT’S WHAT HE SAID “The year didn’t end like we wanted. We would’ve liked to have gone farther, but we were really pleased with how the season went. Next year, we have a lot coming back and I think we can go farther in the playoffs and have a chance to compete for a state championship.”

NOTE Graded out highest among Mounties at 84 percent with 35 knockdown blocks.

NOTE Had more than 1,900 combined yards rushing and receiving with 34 TDs.

NOTE All-state player accounted for 150 tackles, including 10 tackles for loss.

NOTE Oklahoma State commit had 21 tackles, including 3 for loss.

NOTE His 9 interceptions ranks second in the country among sophomores.

NOTE Finished with 40 tackles, 1 interception and 2 tackles for loss. 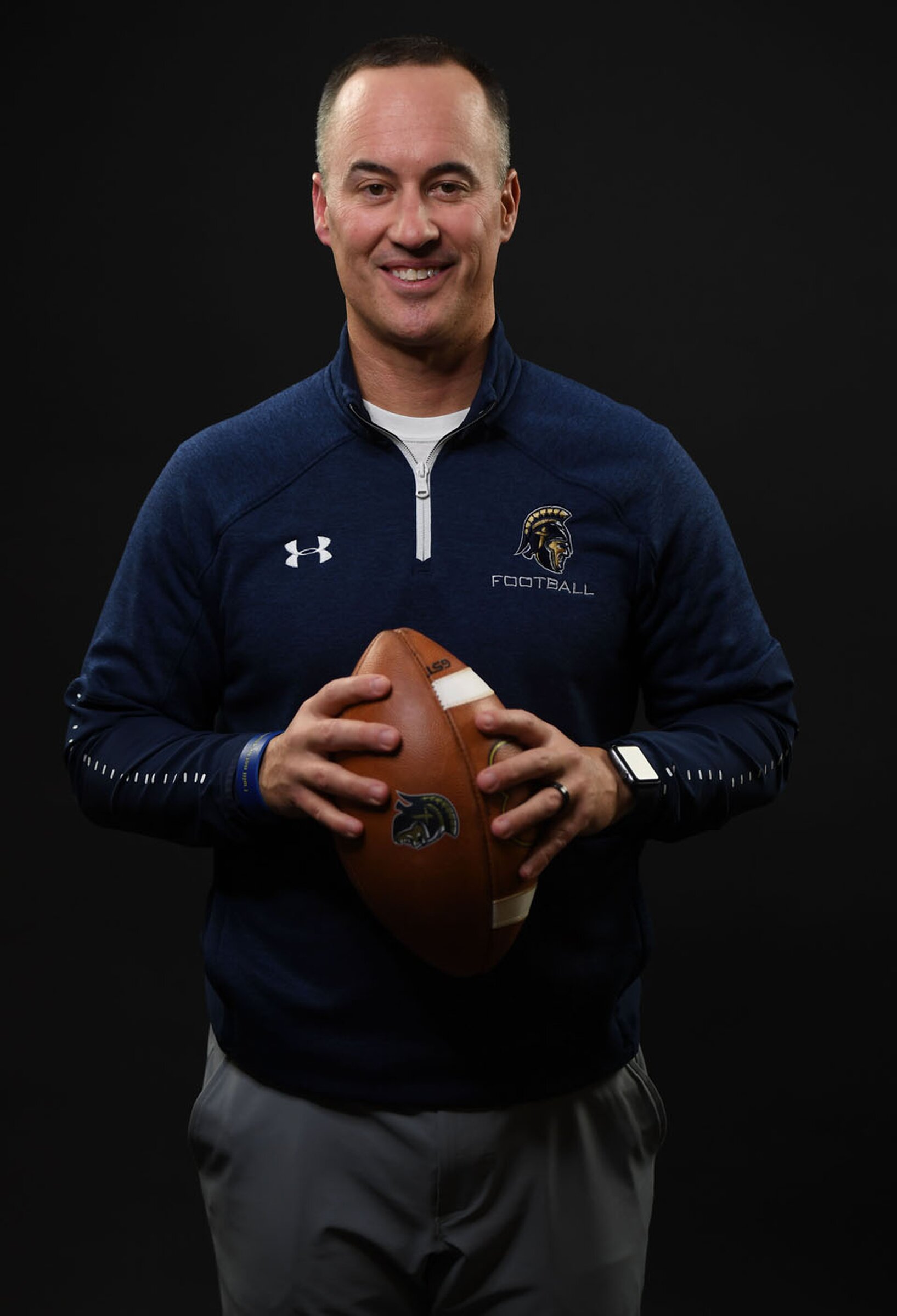 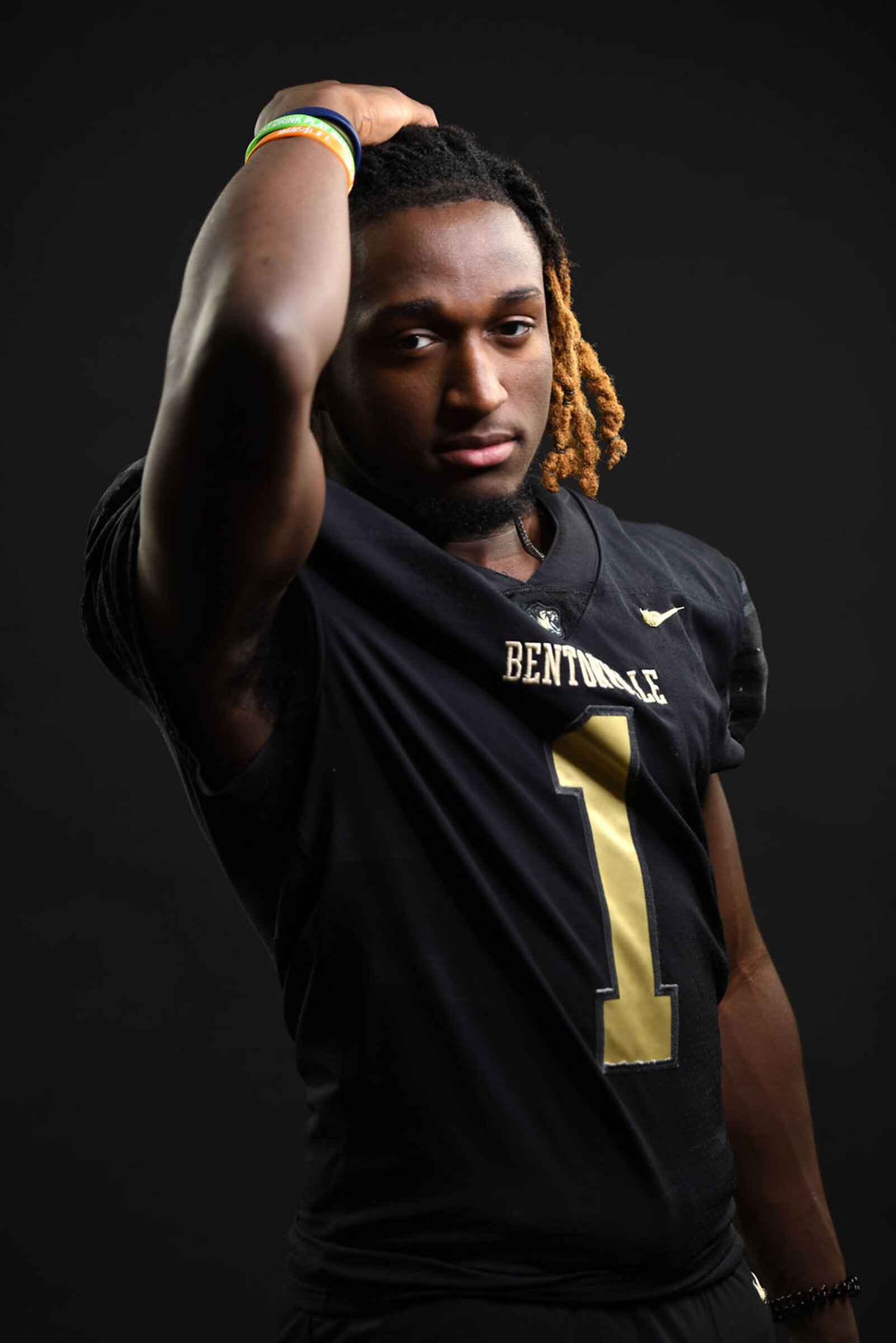 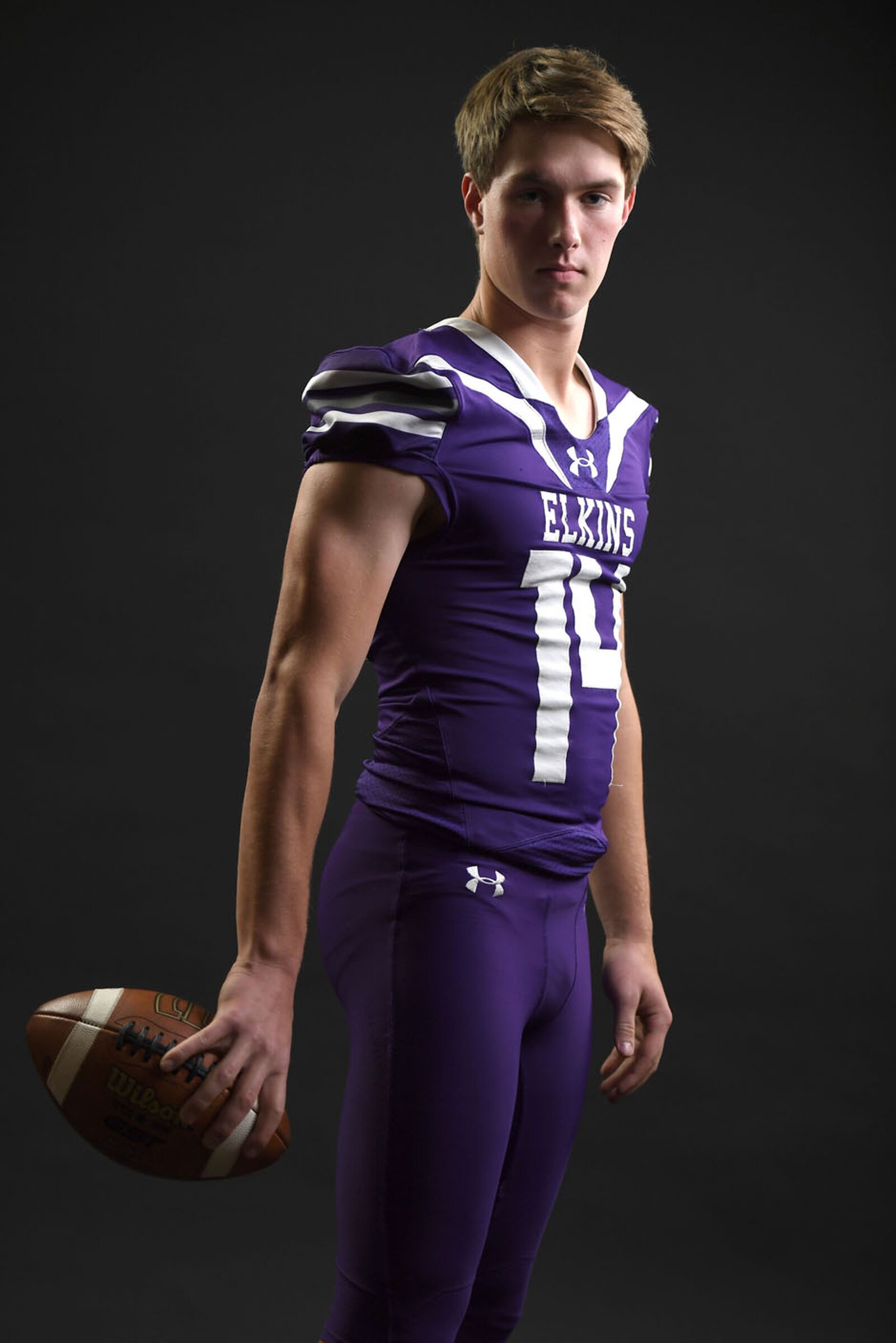 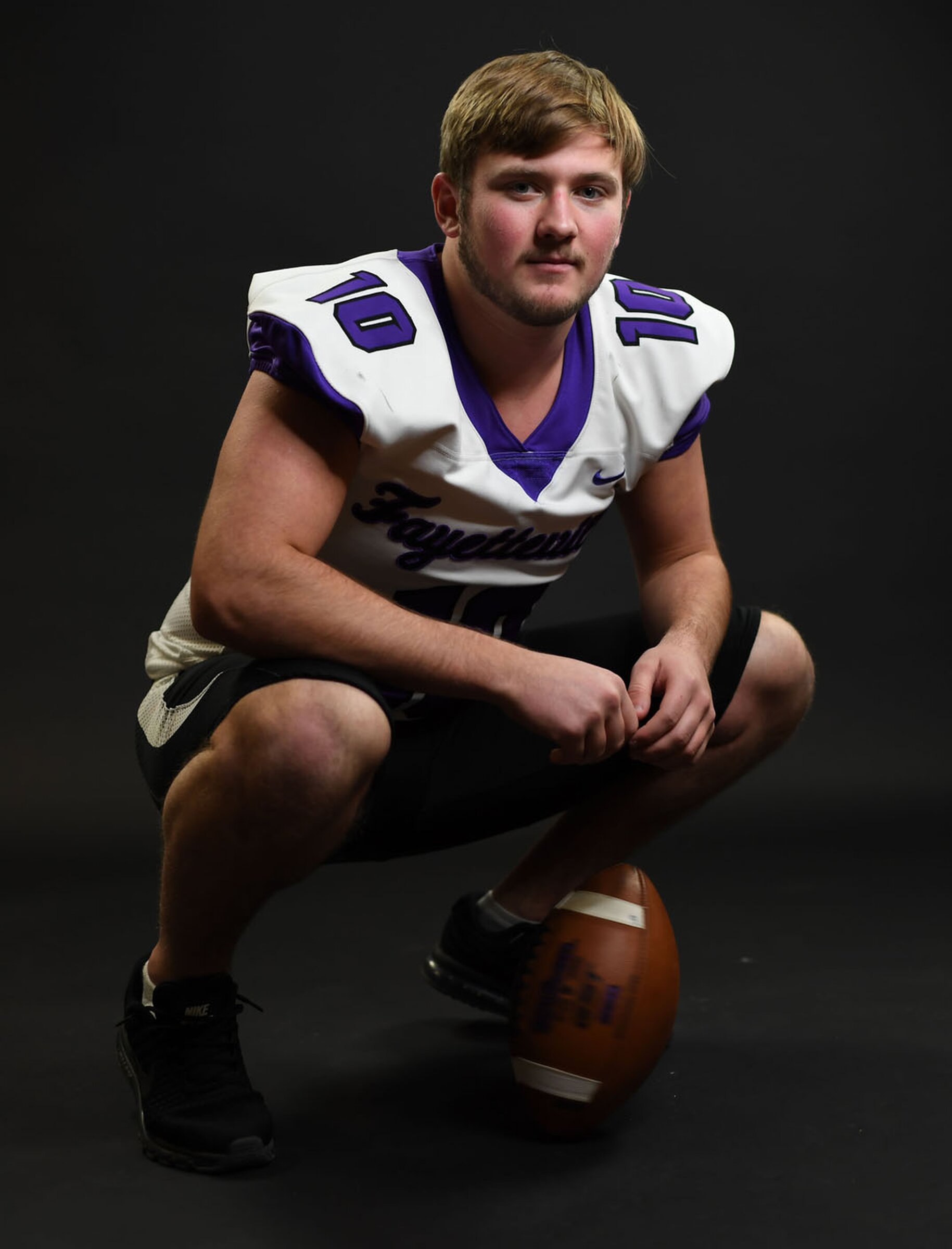