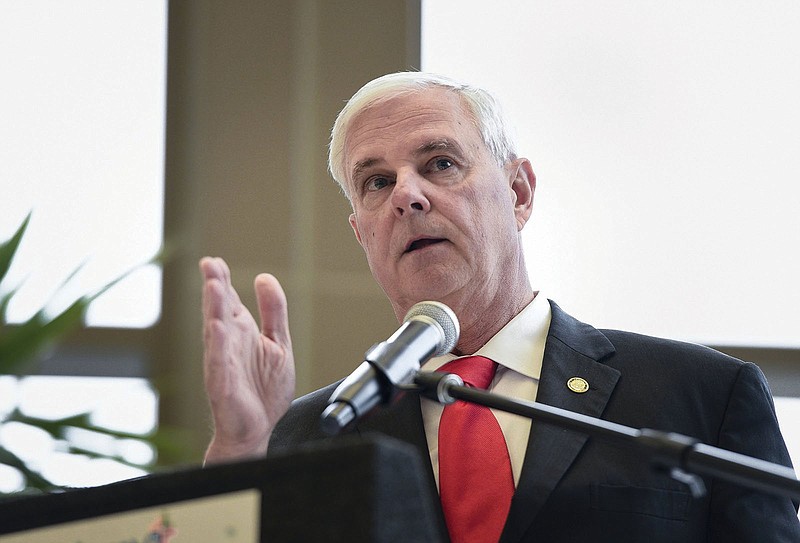 U.S. Rep. Steve Womack, shown during an event in Rogers on Nov. 11, 2019, says he is ready for the criticism after voting to approve a $1.7 trillion spending measure. (File Photo/NWA Democrat-Gazette/Charlie Kaijo)

WASHINGTON -- U.S. Rep. Steve Womack is ready for the criticism.

Womack, R-Ark., was among the nine Republicans in the House of Representatives who voted Friday for a $1.7 trillion spending measure, joining Democrats in sending the measure to President Joe Biden's desk. Womack's vote followed the actions of Sens. John Boozman, R-Rogers, and Tom Cotton, R-Little Rock, who were among 18 Republicans senators who supported the legislation Thursday.

"I'm ready to take the arrows. Sometimes, this can be a very unpopular job," Womack, of Rogers, told the Arkansas Democrat-Gazette. "At the end of the day, here at the Christmas season, I didn't think that shutting the government down or pursuing a yearlong continuing resolution was in the best interest of anybody."

The Senate passed the omnibus bill in a 68-29 vote, while the House voted 225-201. Arkansas Reps. Rick Crawford, French Hill and Bruce Westerman joined a majority of their Republican colleagues in opposing he bill.

The bill dedicates $858 billion for defense and $772.5 billion for nondefense domestic programs. The legislation was a combination of 12 appropriations bills and several other measures not yet passed by the legislative body.

Included in the defense spending is $28 million for the relocation of the F-35 foreign military training program to Fort Smith and an $8 million boost for programs related to the Razorback Range training site. Additionally, money will go toward expanding the production capacity of munitions, including missiles produced at Highland Industrial Park in East Camden.

Boozman's projects are one of the 36 requests submitted by Arkansas' lawmakers. Boozman, Womack, Crawford and Westerman submitted project requests, commonly referred to as earmarks, and secured nearly $158 million for the state. Cotton and Hill did not make any requests.

"I can only speak for myself and what we're doing in Arkansas, but we work really hard to make sure these are very worthwhile projects," he said.

Womack's other requests included $2.2 million for improving the Yellville sanitary sewer system and $4 million for resurfacing roads in Mulberry.

"I would challenge anybody to argue that it's pork," Womack said. "When you look at the city of Yellville and you see the difficulty they're having with their wastewater program, a couple of million dollars for their sewer project is absolutely a godsend to them."

The current Congress brought back earmarks following an 11-year pause because of corruption concerns.

"I just believe there are insufficient guardrails for these so-called earmarks," Hill, R-Little Rock, said Friday afternoon. "Generally speaking, I just believe state and local leaders should advocate through their existing process, and that's just the best way to get around it for programs authorized by law."

Cotton opposes the Senate's congressionally directed spending process. In an interview with the Democrat-Gazette, he said the practice fostered excessive spending behaviors in past Congresses.

"Obviously, Arkansas got some good victories in here, like the funding for Ebbing Air National Guard and support for other infrastructure projects," he said.

The spending measure's legislative provisions include a ban of TikTok on government devices. The prohibition applies to instruments in the executive branch, although there would be exceptions in situations related to national security and law enforcement.

The move stems from concerns regarding TikTok, Chinese parent company ByteDance Ltd. and the Chinese government's ability to access user data. Multiple state governments, including Arkansas, have banned employees from using the app on state devices.

Cotton, who co-sponsored the original legislation, has described TikTok as a "Trojan horse" targeting privacy.

TikTok has stated the company stores data from American users in the United States and Singapore, and these centers are not subject to Chinese law. TikTok spokesperson Brooke Oberwetter described the language's inclusion in the spending measure as "a political gesture that will do nothing to advance national security interests."

She referenced a pending agreement with the Committee on Foreign Investment in the United States addressing data concerns.

"These plans have been developed under the oversight of our country's top national security agencies -- plans that we are well underway in implementing -- to further secure our platform in the United States, and we will continue to brief lawmakers on them," she said.

"I wouldn't expect a company under the thumb of Chinese Communists to say anything else," he said.

Cotton additionally worked with New Jersey Democrat Bob Menendez and Alaska Republican Dan Sullivan on delivering compensation to victims of the Sept. 11, 2001, terrorist attacks and the 1983 Marine barracks bombing in Beirut. The House previously approved payments to 9/11 victims' families, but Cotton wanted lawmakers to include the families of 241 Americans who died in the 1983 attack.

"My goal was to treat all victims equitably, so I didn't want to leave any victims behind," he said.

Boozman worked with colleagues on the Senate Committee on Agriculture, Nutrition and Forestry to insert agriculture and nutrition language in the final measure. These provisions include $250 million in assistance for rice producers affected by rising fertilizer prices and a new program to assist farmers with voluntary carbon markets.

"Agriculture is such that it's 25% of our state's economy. You go outside of any town of any size, it's probably 85 or 90%," said Boozman, the committee's top Republican. "It's really important that we do a good job in helping in every way that we can."

The measure also changes the summer food program for children. Organizations will have flexibility for offering meal delivery services rather than having children eat meals at locations. Families will be eligible to receive $40 a month per child for purchasing groceries during the summer.

Another factor in Womack's support for the spending bill is the incoming House. While Republicans will control the chamber, not all members have rallied behind current Minority Leader Kevin McCarthy, R-Calif.

"Given the fractious nature of the incoming majority with evidence -- the speaker's election -- I would be very concerned about our ability to craft a spending plan early in the next year that would be able to make it across the floor of the House and the Senate, and get signed into law," Womack said. "When you look at the situation that we're in, I believe that in the best interest of America's national security with a higher defense number in the omni, it outweighs the concerns I have in the bill."

The omnibus was lawmakers' last priority of the current Congress. The action of legislators came three months into the current fiscal year, triggering a desire for Congress to be more productive with the next appropriations measures.

"This is not how the Congress should work," Cotton said. "I'm as frustrated as anyone that this is not a desirable process."

Womack has advocated for Congress to take up appropriations bills before the new fiscal year begins in October. On Twitter, Westerman called the omnibus the "product of a failed process," adding it was "an honor to vote against such garbage."

In a statement following the vote, Crawford said Congress rushed the spending "just days before the new GOP House majority will take over with a commitment to bring adult leadership to Washington."

Boozman said Congress should take up the appropriations bills individually to allow lawmakers to dictate federal spending. He shared optimism that legislators could restore regular order, citing the recent frustration on Capitol Hill.

Hill said House Republicans want to wade through the appropriations process, and he hopes Senate leaders share that commitment.

"I hope that they would prioritize getting their job done over there," he said. "The last two Congresses, the Senate has not taken up the spending bills, and they've constantly waited until the last moment and it creates this kind of dysfunction, lack-of-due-diligence, lack-of-transparency process."