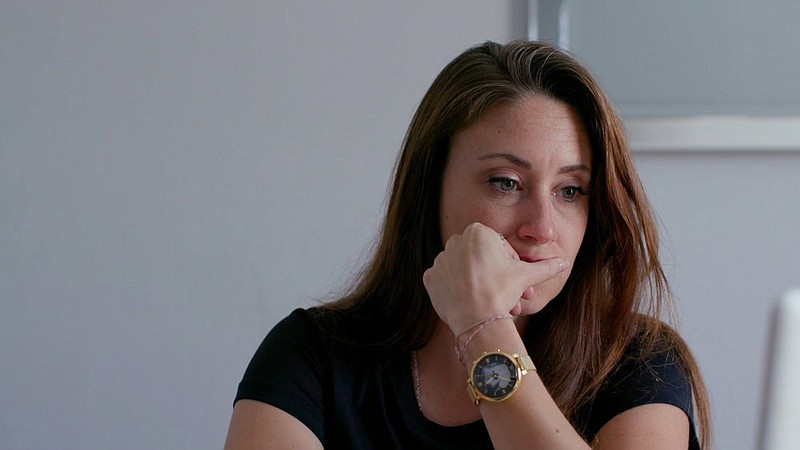 Casey Anthony is shown in a scene from the docuseries “Casey Anthony: Where the Truth Lies.” (Peacock)

In Childish Gambino's 2011 song "Bonfire," he raps that he "made the beat then murdered it, Casey Anthony." Call-outs in hip-hop songs are usually reserved for celebrities like Halle Berry or Beyonce — talented people who are easily recognizable as fodder in witty lyrics. But Anthony has a different kind of name recognition: In 2008, she was charged with first-degree murder in the death of her 2-year-old daughter, Caylee.

After living with public hostility for over a decade after her acquittal, Anthony is trying to tell her side of events in the Peacock docuseries "Casey Anthony: Where the Truth Lies," which premiered in late November.

Anthony's trial garnered hordes of media attention and vitriol when she was eventually found not responsible for her daughter's death but guilty on four counts of providing false information to law enforcement. In the new three-episode limited series, Anthony alleges that her father was responsible for Caylee's death and was the force behind Anthony's lies.

With the new show, Anthony joins an infamous list of people who have been accused or convicted of misdeeds only to find themselves in a new rung of society: celebrity. This year alone, cannibal Jeffrey Dahmer, scammer Anna Delvey and tech fraud Elizabeth Holmes were the focus of incredibly popular limited series based on their lives and crimes.

Effects from these projects can have far-reaching implications beyond viewership numbers; they can not only alter public sentiment, but potentially affect the justice system. Just look at Adnan Syed, the subject of the "Serial" podcast, who had his murder conviction tossed this year. Because these entertainment ventures can potentially change the course of someone's life, the question becomes: Who deserves a platform?

"Where the Truth Lies" provides Anthony with a 3 ½-hour pulpit. Her narrative is the heart of the series. Anthony's legal team, which she says has become her surrogate family since she accused her father of sexual assault, is firmly in her corner. The rest of the central interviewees, including the detective who worked on Caylee's case and Anthony's former friends, believe that the now-36-year-old is somehow responsible for her daughter's death. But the doc is not a true-crime re-enactment of the case or a "Serial"-esque investigation. Though it shows viewpoints from people who support and contradict Anthony, it is a story largely told from her point of view.

Alexandra Dean, the show's director, believes that the hatred of Anthony was fed by the media's obsession with her story — Nancy Grace once called her "the most hated mom in America" — which subsequently affected her public image. "Casey Anthony's court case coincided with the peak of reality television and 24-hour cable news, and because of that, I think Casey was turned into a two-dimensional reality TV villain by certain cable personalities," Dean said.

Dean, who was drawn to Anthony's story because of a desire to be a "voice for the voiceless," said she "love[s] the mixed response" to the project because she feels "it's stirring up debate where before there was just blind hatred."

Much of that renewed and rehashed conversation has taken place on social media. Comedian Rosie O'Donnell said in a TikTok that she believes Anthony is innocent after watching the Peacock show. On the same site, a video was posted of someone believed to be Anthony onstage during a Steel Panther concert, which some commenters pointed out would contradict Anthony's claims from the documentary that she is afraid of leaving her home.

Criminal suspects and crimes have always captured public interest, but Adam Golub, professor of American studies at California State University at Fullerton, says our current "age of true crime on demand" has seen notoriety and celebrity increasingly entwined. "I think [the docuseries is] a clear attempt to try to remix Casey Anthony into the culture ... . This is an attempt to try to change the story, to change the narrative ... kind of like a celebrity who's trying to reinvent their image or rebrand their image," he said. "I think that if we reached the point where criminals are kind of engaging in PR, that's certainly crossed the line into celebrity also."

Some viewers, as well as people who refuse to watch the series, have flooded the documentary's IMDb page to complain that Anthony is receiving more media attention. The outrage mirrors the response to Netflix's "Dahmer — Monster: The Jeffrey Dahmer Story," which creator Ryan Murphy defended in a New York Times interview: "What are the rules now? Should we never do a movie about a tyrant?"

Dean takes issue with the position that the voices behind true-crime stories don't need to be shared. She said she was "surprised a few members of the press have decided to join the mob insisting Casey and I both stay silent. I did not see that coming. I expect critics to disagree with the artistic choices in my documentaries, but press calling for less freedom of press, less freedom of speech. That startled me."