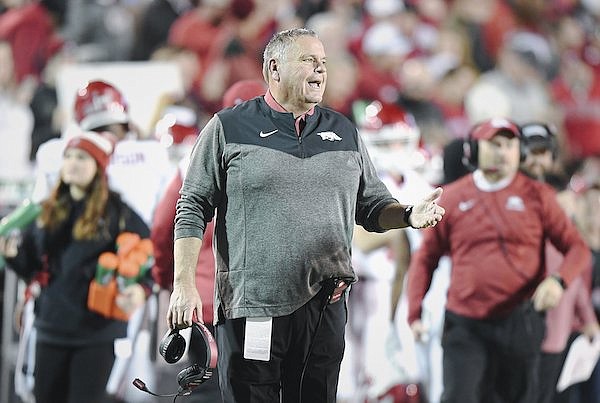 Arkansas coach Sam Pittman is shown during the Razorbacks' 55-53 victory over Kansas at the Liberty Bowl on Wednesday, Dec. 28, 2022, in Memphis, Tenn.

According to terms of his contract signed earlier this year, Pittman will receive a $250,000 raise and one-year extension for winning seven games.

A bowl victory can count toward the win total detailed in his contract as long as the opponent is ranked in the top 25 or is a member of a Power 5 conference. Kansas competes in the Big 12.

The Razorbacks finished the season with a 7-6 overall record and 3-5 record in SEC play.

Pittman's annual salary will be increased to $5.25 million and his contract will be extended through Dec. 31, 2027. He is also earning $1.1 million per year in compensation that is scheduled to be disbursed as a retention payment at the end of the 2024 season.

In addition to the pay raise, Pittman is in line to earn a one-time $150,000 bonus this year for the team playing in the Liberty Bowl, which is defined as a "Tier 2 Bowl Game" in his contract. He is also eligible to receive up to $37,500 for academic achievements by his players.

Pittman has a 19-17 record in three seasons as Arkansas' coach. He has led the Razorbacks to consecutive seasons with a winning record for the first time since 2015-16.

Arkansas did not have a winning record between 2017-20, the final year of which was Pittman's first leading the program. The Razorbacks went 3-7 that year against all-SEC competition.

In the three years prior to Pittman's arrival, Arkansas had an 8-28 overall record, including a 1-23 record against SEC teams. Pittman's SEC record is 10-16.

Arkansas had a 9-4 record last season and defeated Penn State 24-10 in the Outback Bowl to finish 21st in the final Associated Press rankings. Pittman received a new contract following the season that increased his base pay by $2 million per year and extended his contract by two years through the 2026 season.

AP voters ranked Arkansas No. 10 nationally in September following a 3-0 start in games against Cincinnati, South Carolina and Missouri State, but the Razorbacks lost 6 of their final 9 regular-season games, including 3 of 4 in November.

All of the November losses were by three points or less. The Razorbacks had four such losses during the season.

Arkansas led Kansas 38-13 in the third quarter of Wednesday's game. The Jayhawks scored 25 consecutive points to force overtime, including 15 points in the final 1:05 of regulation.

The teams traded scores in the first two overtime periods before the Razorbacks won by virtue of a two-point conversion contest in the third overtime. With 108 combined points, the game was the fourth-highest scoring bowl game in history.

Pittman is the second Arkansas coach to win bowl games in back-to-back seasons, joining Bret Bielema, Pittman's former boss who led the team to bowl wins over Texas and Kansas State to conclude the 2014 and 2015 seasons.