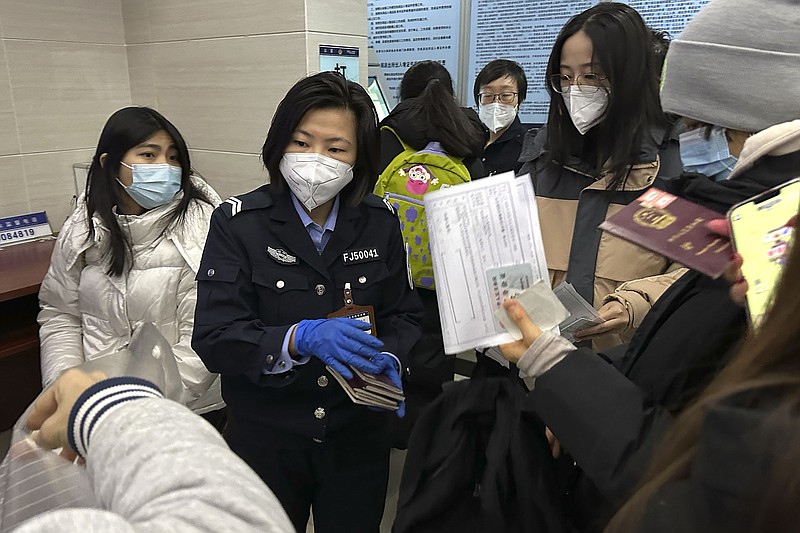 An officer collects passports from residents for renewal and reapplication Wednesday at a community police station in Beijing as China resumes issuing passports for tourism ahead of next month’s Lunar New Year celebrations. (AP/Ng Han Guan)

As China resumes issuing passports for tourism in another big step away from virus controls that isolated the country for almost three years -- setting up a potential flood of Chinese going abroad for next month's Lunar New Year holiday -- the U.S. on Wednesday announced new covid-19 testing requirements for all travelers from China because of a surge of infections.

The increase in cases across China comes after the rollback of the nation's strict anti-virus controls. China's "zero covid" policies had kept the country's infection rate low but fueled public frustration and crushed economic growth.

The new U.S. requirements, which start Jan. 5, apply to travelers regardless of their nationality and vaccination status.

In a statement explaining the testing, the U.S. Centers for Disease Control and Prevention cited the surge in infections and what it said was a lack of adequate and transparent information from China, including genomic sequencing on the viral strains circulating in the country.

"These data are critical to monitor the case surge effectively and decrease the chance for entry of a novel variant of concern," the CDC said.

Some scientists are worried the covid-19 surge in China could unleash a new coronavirus variant on the world that may or may not be similar to the ones circulating now. That's because every infection is another chance for the virus to mutate.

"What we want to avoid is having a variant enter into the U.S. and spread like we saw with delta or omicron," said Matthew Binnicker, director of clinical virology at Mayo Clinic in Rochester, Minn.

But the CDC's action may be less about stopping a new variant from crossing U.S. borders and more about increasing pressure on China to share more information, said Dr. David Dowdy, an infectious disease epidemiologist at Johns Hopkins Bloomberg School of Public Health, adding he hopes the restrictions "aren't kept in place longer than they need to be."

"I don't think it's going to have a major impact in slowing the spread of covid-19," Dowdy said. "We have a whole lot of transmission of covid-19 here within our borders already."

Dr. Stuart Campbell Ray, an infectious disease expert at Johns Hopkins University, agreed China isn't sharing enough genomic sequencing information. But he also said the U.S. has become a little complacent about sequencing and needs to redouble its own efforts. The CDC also announced the expansion of an early warning program that tests volunteers at select airports for new and rare variants of the coronavirus. That program will expand to airports in Seattle and Los Angeles.

Under the new U.S. rules, travelers to the U.S. from China, Hong Kong and Macau, will be required to take a covid-19 test no more than two days before travel and provide a negative test before boarding their flight. The testing applies to anyone 2 years and older, including U.S. citizens.

It will apply to people traveling from China via a third country and to people connecting through the U.S. as they go on to other destinations. Anyone testing positive more than 10 days before the flight can provide documentation showing they've recovered from covid-19 instead of a negative test result.

It will be up to the airlines to confirm negative tests and documentation of recovery before passengers board.

Other countries have taken similar steps in an effort to keep infections from spreading beyond China's borders. Japan will require a negative covid-19 test upon arrival for travelers from China, and Malaysia announced new tracking and surveillance measures. India, Italy, South Korea and Taiwan are requiring virus tests for visitors from China.

Lunar New Year, which begins Jan. 22, is usually China's busiest travel season, and China announced Tuesday it will resume issuing passports for tourism for the first time since the start of the pandemic in 2020.

"We look forward to welcoming Chinese travelers back to the United States," U.S. Travel Association President and CEO Geoff Freeman said in a statement. He called the U.S. approach to testing inbound travelers "reasonable and appreciated."

The U.S. action is a return to testing requirements for some international travelers. The Biden administration lifted the last of such mandates in June. At that time, the CDC continued to recommend that people boarding flights to the U.S. get tested close to departure time and not travel if they are sick.

"We've done this before. We can do it again," Dowdy said.

Early in the pandemic, the U.S. barred entry to foreigners traveling from China, weeks after the virus first emerged there three years ago, and dozens of other countries were added to the list. The country started lifting travel bans late last year, but required travelers to the U.S. to be vaccinated and tested.

BACK ON THE ROAD

For the past three years, China largely shut its borders and kept its people home, retreating from the global engagement that was the foundation for its rise.

As the country now prepares to gradually reopen its doors to help rescue a faltering economy, the world is both excited about the potential boon for business and tourism, but wary about exposure to a country facing an explosion of covid-19 cases.

Starting Jan. 8, China will drop its strict quarantine requirements for travelers arriving from abroad and lift rules that had limited the number of incoming flights and passengers. It will start processing Chinese passport applications and mainland permits to go to Hong Kong and make it easier for foreigners to get visas for business, study and family reunions.

Immediately, bookings for flights surged as Chinese headed for the exits and planned long-delayed family reunions. Business groups and economists hailed the easing as an important step toward restoring confidence in China's prospects. On a popular social media site, the French Embassy in China wrote: "Chinese friends, France welcomes you with open arms!"

But the optimism has been tempered by concerns about China's handling of the explosive wave of infections since it abruptly abandoned its "zero covid" strategy. Hospitals and funeral parlors have been overwhelmed, and some medicines are scarce. The central government has also failed to provide reliable data, or estimates, on covid infections and deaths, raising concerns about the scale of the outbreak and Beijing's credibility.

Many would-be travelers to China expressed worries about getting covid in a country where medical services are already overstretched. Others wondered how welcoming China would be to foreigners after fanning nationalism and even xenophobia during the pandemic.

Despite the lucrative prospect of Chinese tourists, some countries and cities are nervous about the potential flood of arrivals. In Italy, the health minister said Wednesday that all travelers from China would be required to take covid antigen tests upon arrival so the virus could be sequenced if it is detected.

"The measure is essential to ensure surveillance and detection of possible variants of the virus in order to protect the Italian population," said the minister, Orazio Schillaci.

Japan said it would limit the number and destination of flights from China and require those who recently traveled to the country to be tested on arrival, and sent to a weeklong quarantine if positive.

The U.S. government on Wednesday announced a similar measure on travelers from China because of the lack of transparent data on the current outbreak.

Still, the loosening has unleashed massive pent-up demand. On Tuesday, a day after the changes were announced, bookings for flights from mainland China to popular destinations including Singapore, Japan and South Korea, rose threefold on Trip.com Group, a Chinese travel-booking company. Reservations for flights to the mainland increased fivefold, according to data provided by the company.

Some airlines began to resume and increase flights to the mainland. Singapore Airlines said it would reinstate its Singapore-to-Beijing route for the first time since 2020 starting Friday, with more to be added in the coming months.

The move is a relief for foreign businesses with operations in China. Many had complained that China's restrictions made it hard for companies to send employees and executives to their Chinese factories and offices.

Rachel Speth, the owner of a business that sells bamboo-based kitchen utensils with offices in Shanghai and the United States, said that on her most recent trip back to China in September, she and her partner had to spend five weeks in quarantine after her partner tested positive for covid.

The new policy is a dream come true, said Speth, who is in Shanghai. "Now we can come and go freely. It's a new day for work schedules and work flow."

The easing gives businesses clarity that helps them plan for the future, said Eric Zheng, president of the American Chamber of Commerce in Shanghai, who welcomed Beijing's move. "It's been three years -- it's been too long for businesses to stay out of China."

Many homesick Chinese are hoping to visit during the Lunar New Year holiday, which traditionally is the world's largest annual migration, when hundreds of millions of Chinese travel for family reunions.

Zhang Yuhan, a 26-year-old employee at a securities firm in Japan, said that after waking up to the news about the reopening, she immediately started searching for tickets while brushing her teeth and putting makeup on, to try to snag tickets before they sold out.

She said she bought a one-way ticket to Jilin province for the holiday to see her grandmother, who is recovering from surgery. This would be her first trip home in three years.

"I'm just so very excited, I really want to return to China to see my friends at home and eat delicious food," Zhang said.

The lifting of quarantine rules does not end all obstacles to travel to China. The government has not said if it would start issuing tourist visas again. Also, many people can't afford the airfare.

Gwen Zhao, 28, a Chinese doctoral student in Japan, said she was sorry that she couldn't be with her family when her grandmother died last year. She hopes to visit next year but will need to wait for airfares to fall. Round-trip tickets used to cost her about $400, she said, but are now about $2,800 -- seven times as much.

Information for this article was contributed by Carla K. Johnson, Laura Ungar and additional staff members of The Associated Press and by Chang Che, Claire Fu and Amy Chang Chien of The New York Times.