U.S. requirement is pre-departure by Compiled by Democrat-Gazette staff from wire reports | December 30, 2022 at 4:54 a.m. 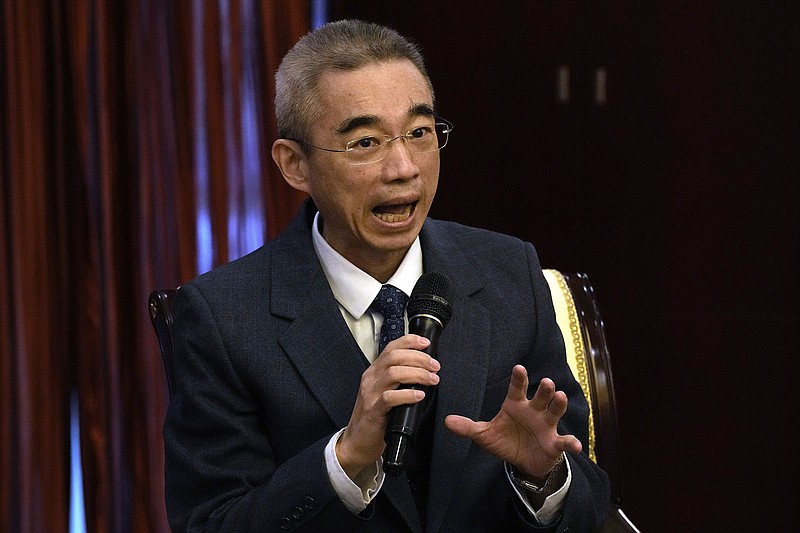 “We keep nothing secret. All work is shared with the world,” Wu Zunyou, chief epidemiologist at China’s Center for Disease Control, said Thursday in Beijing, asserting that new virus strains are reported in a timely way. (AP/Ng Han Guan)

After two recent flights from China brought almost 100 coronavirus-infected passengers to Milan, Italy on Wednesday announced that all arrivals from China would be tested, with positive cases to isolate. The United States the same day mandated pre-departure testing for such passengers, days after Beijing moved to reopen its borders amid a spike in cases.

Half of travelers on a Dec. 26 flight to Milan tested positive for the virus, with more than a third of passengers on a second flight that day also infected, according to RAI, the Italian public broadcaster. "The measure is essential to ensure surveillance and detection of possible variants of the virus in order to protect the Italian population," Italian Health Minister Orazio Schillaci said in a statement.

The move to relax borders that had been closed for nearly three years comes as coronavirus infections are surging across China, and with U.S. officials increasingly worried about Beijing's lack of transparency about the state of the pandemic there. Earlier this month, China stopped releasing a daily count of asymptomatic cases, and it recently offered covid-19 death tolls that are regarded as highly improbable.

The new controls, and China's reluctance to offer data, recall an earlier stage of the pandemic. But even as China faces a domestic health catastrophe, these measures are also regarded by experts as likely to be ineffective at a time of widespread vaccine availability, and with covid-related travel restrictions all but abolished in much of the world.

"At the moment, there is no clear-cut evidence of benefit in restricting travel from any country or doing targeted surveillance," said Paul Tambyah, the Singapore-based president of the International Society for Infectious Diseases. "We learned this ... early in the pandemic when travel restrictions or surveillance measures were mostly instituted long after the virus had already taken root in the country imposing the restrictions."

"There isn't real-world scientific evidence to support these measures," said Karen Grepin, a professor at the University of Hong Kong who specializes in global health policy. She added that the situation was very different from three years ago, with many countries having access to vaccines and with significant parts of their population already exposed to the virus.

"Right now the pandemic situation in China is not transparent," Wang Pi-Sheng, the head of Taiwan's epidemic command center, told The Associated Press. "We have a very limited grasp on its information, and it's not very accurate."

The U.S. Centers for Disease Control and Prevention said Wednesday that pre-departure testing would help slow down virus transmission amid the possibility of new variants emerging. Italy also voiced similar concerns about identifying potential new variants being brought into the country.

Health-care experts noted that comparably strict measures did not stop the omicron variant from spreading last winter. Officials in Singapore and Australia -- two countries that shut their borders during earlier stages of the pandemic -- said this week that they had no plans to impose additional restrictions on travelers from China.

Tambyah acknowledged concern that the virus might evolve but said that "if this virus behaves like every other human virus in history, the new variants are likely to be more transmissible and less virulent."

The omicron variants circulating in China "are already present in the rest of the world, and most countries now have a good immunity wall," said physician David Owens, co-founder of the OT&P Healthcare medical practice in Hong Kong.

Experts said governments should prioritize vaccinations over requiring tests at their borders. As of early December, only about two-thirds of Chinese residents above age 60 had received a booster shot.

Moves by several countries to mandate covid-19 tests for passengers arriving from China reflect global concern that new variants could emerge in its ongoing explosive outbreak -- and that the government may not inform the rest of the world quickly enough.

The U.S., Japan, India, South Korea, Taiwan and Italy have announced testing requirements for passengers from China. The U.S. cited both the surge in infections and what it said was a lack of information, including genomic sequencing of the virus strains in the country.

Authorities in Taiwan and Japan have expressed similar concern.

The island will start testing everyone arriving from China on Jan. 1, ahead of the expected return of about 30,000 Taiwanese for the Lunar New Year holiday later in the month. The new Japanese rules, which restrict flights from mainland China, Hong Kong and Macao to designated airports beginning Friday, are already disrupting holiday travel plans.

Wang noted Thursday that many countries have not changed their policies for travelers from China and said that any measures should treat people from all countries equally.

Every new infection offers a chance for the coronavirus to mutate, and it is spreading rapidly in China. Scientists can't say whether that means the surge will unleash a new mutant on the world -- but they worry that might happen.

Chinese health officials have said the current outbreak is being driven by versions of the omicron variant that have also been detected elsewhere, and a surveillance system has been set up to identify any potentially worrisome new versions of the virus. Wu Zunyou, the chief epidemiologist at China's Center for Disease Control, said Thursday that China has always reported the virus strains it has found in a timely way.

"We keep nothing secret," he said. "All work is shared with the world."

Italy's health minister told the Senate that sequencing indicates that the variants detected in passengers arriving from China are already in circulation in Europe. "This is the most important and reassuring news, Orazio Schillaci said.

That squares with what the European Union's executive branch has said. The EU refrained Thursday from immediately following member Italy in requiring tests for visitors from China, but is assessing the situation.

More broadly, World Health Organization Director-General Tedros Adhanom Ghebreyesus has said the body needs more information on the severity of the outbreak in China, particularly on hospital and ICU admissions, "in order to make a comprehensive risk assessment of the situation on the ground."

China rolled back many of its tough pandemic restrictions earlier this month, allowing the virus to spread rapidly in a country that had seen relatively few infections since an initial devastating outbreak in the city of Wuhan. Spiraling infections have led to shortages of cold medicine, long lines at fever clinics, and at-capacity emergency rooms turning away patients. Cremations have risen several-fold, with a request from overburdened funeral homes in one city for families to postpone funeral services until next month.

The global concerns, tinged with anger, are a direct result of the ruling Communist Party's sudden exit from some of the world's most stringent anti-virus policies, said Miles Yu, director of the China Center at the Hudson Institute, a conservative think tank in Washington.

"You can't conduct the lunacy of 'zero-covid' lockdowns for such a long period of time ... and then suddenly unleash a multitude of the infected from a caged China to the world," risking major outbreaks elsewhere, Yu said in an email.

Dr. David Dowdy, an infectious disease expert at Johns Hopkins Bloomberg School of Public Health, said the move by the U.S. may be more about increasing pressure on China to share more information than stopping a new variant from entering the country.

China has been accused of masking the virus situation in the country before. An AP investigation found that the government sat on the release of genetic information about the virus for more than a week after decoding it, frustrating WHO officials.

Health officials from the 27-member bloc promised to continue talks on seeking a common approach to travel rules. However, the EU's executive arm said the BF.7 omicron variant prevalent in China was already circulating in Europe and that its threat had not significantly grown.

"However, we remain vigilant and will be ready to use the emergency brake if necessary," the European Commission said in a statement.

Even though virus experts in the EU have played down the immediate danger, Italy made coronavirus tests mandatory for all airline passengers arriving from China. More than 50% of people screened upon arrival at Milan's Malpensa airport in recent days tested positive for the virus.

Italian Premier Giorgia Meloni on Thursday increased pressure on the EU to join Italy's approach. She said requiring covid tests of all passengers from China "is only effective if it is taken at the European level," noting that many arrive in Italy on connecting flights through other European countries.

Considering the reluctance from several EU nations and experts, the EU's health security committee said in a statement after meeting Thursday that "we need to act jointly and will continue our discussions."

Holding off was certainly something Germany wanted. "There is no indication that a more dangerous variant has developed in this outbreak in China ... which would bring corresponding travel restrictions," Health Ministry spokesman Sebastian Guelde said.

A coordinated EU approach is necessary since almost all EU member nations are part of Europe's visa-free Schengen Area. The unrestricted travel means that testing in one nation would not be very effective since travelers from China could enter from another EU nation and spread the virus.

After strict travel restrictions at the height of the pandemic, the EU returned to a pre-pandemic system of free travel this fall, but member nations agreed that an "emergency brake" could be activated at short notice to meet an unexpected challenge.

"At a scientific level, there is no reason at this stage to reimpose specific border controls," Professor Brigitte Autran, a vaccines expert for France's health ministry, told Radio Classique on Thursday. 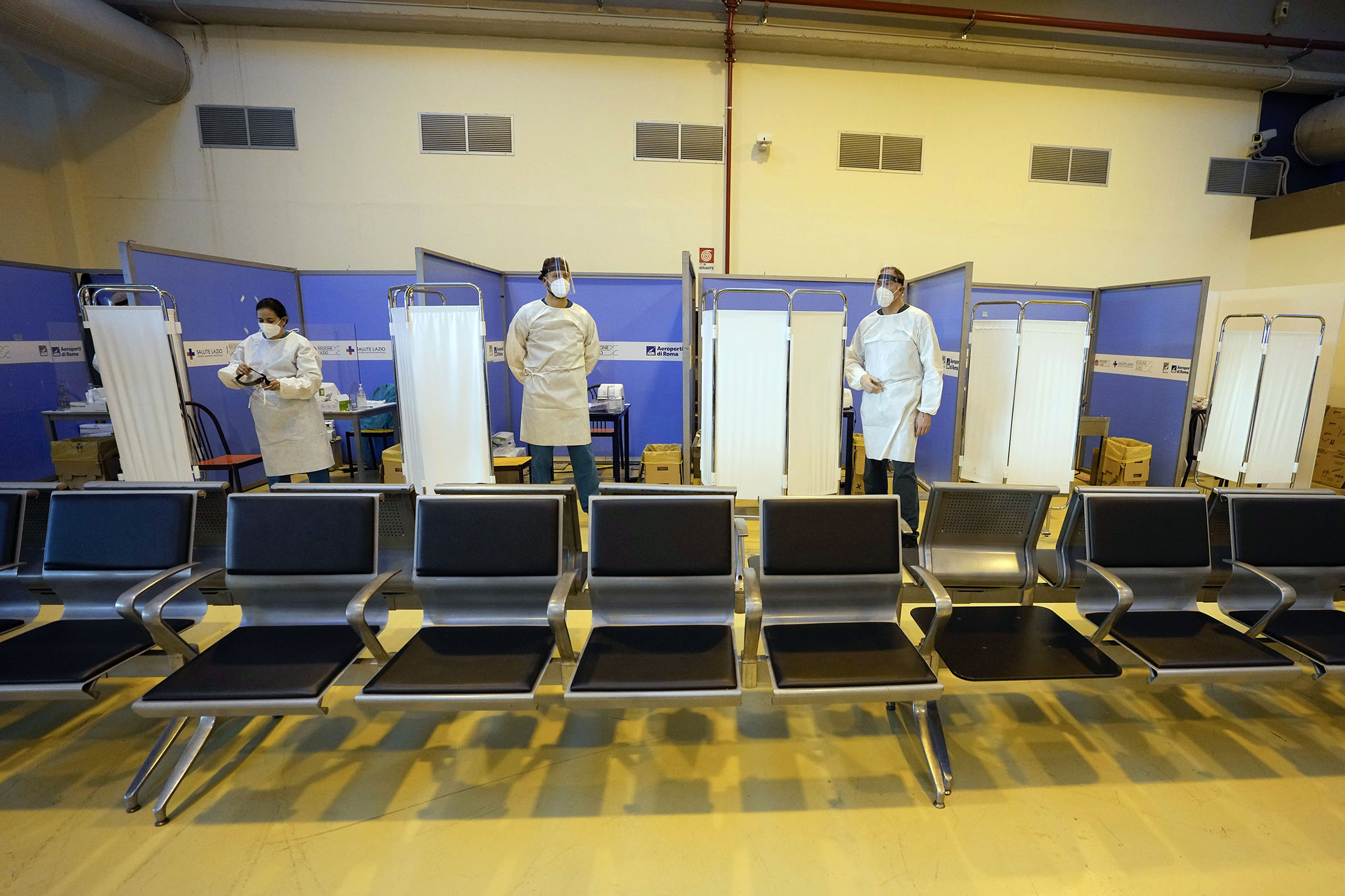 Medical personnel wait for passengers from an Air China flight from Guangzhou, China, at a covid-19 testing area at Rome’s Leonardo da Vinci International Airport on Thursday. Italy has made coronavirus tests mandatory for all airline passengers arriving from China. Other European Union members have refrained from following suit despite pressure from Italian Prime Minister Giorgia Meloni. (AP/Alessandra Tarantino)