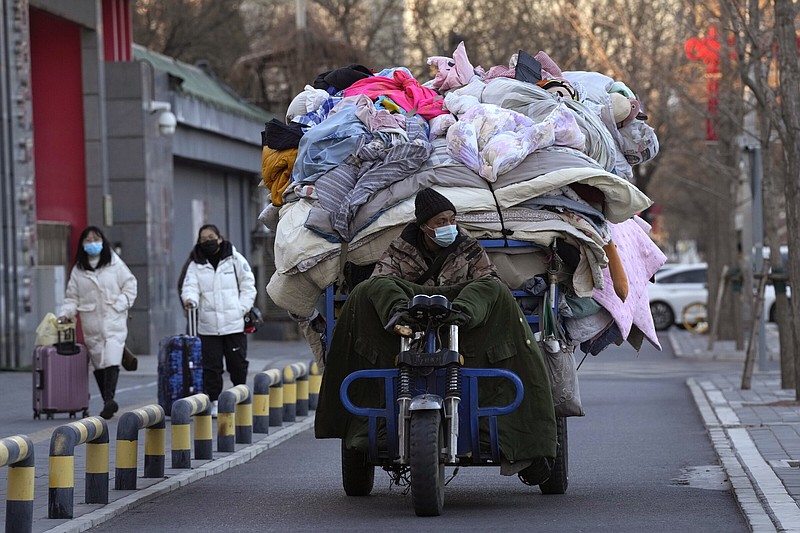 A man wearing a mask transports used quilts and other scavenged cloth material Friday in Beijing. China is on a bumpy road back to normal life as schools, shopping malls and restaurants fill up again following the abrupt end of some of the world’s most severe restrictions even as hospitals are swamped with feverish, wheezing COVID-19 patients. (AP/Ng Han Guan)

No novel covid-19 variants have emerged in China, according to a global consortium that's tracking coronavirus mutations, potentially easing concerns that the country's record wave of infections would give rise to new strains that could circulate around the world.

National, provincial and private health care authorities in the country have provided nearly 1,000 genetic sequences from infected patients to GISAID in the past five days, said Chief Executive Officer Peter Bogner. So far, all the samples continue to be omicron, though subvariants that have hit other parts of the world -- including XBB.1 and BQ.1.1 -- have emerged, he said.

"The variants continue to circulate without any significant changes that raise any specter of concern," Bogner said. "You do not have any kind of data that suggest anything but business as usual."

China is also ramping up efforts to track mutations, with the recent upload of sequencing data comparing with just 25 samples submitted in the previous month, he said. The data is important for helping with future needs as statistics on cases and deaths provide backward-looking information, he said.

China's move in early December to exit zero-covid sparked a surge of infections, but the extent of the outbreak has been difficult to gauge after officials abandoned publishing an accurate case count and narrowed their definition of a virus death.

The information vacuum and the country's plan to reopen its borders in early January have prompted a slew of nations to tighten measures for travelers from China on concerns the wave may spawn new variants or seed outbreaks.

The U.S. will require all airline passengers coming from China to show a negative test result, while Japan will test travelers upon arrival and India will require a PCR test.

Italy, which has introduced mandatory rapid tests for passengers coming from China, has said they haven't found any concerning covid mutations in recent arrivals.

Bogner said countries around the world have pulled back on their pandemic work just as infection rates rise in many areas. Sequencing is an important part of the covid effort, and it's not inevitable that the next variant will come from China, he said.

"Surveillance is breaking down around the world," he said. "To say we should worry about a variant emerging in mainland China -- there is a whole planet to worry about. These things emerge where they want to emerge."

French health authorities will carry out random PCR tests at airports on passengers arriving from China to identify potential new coronavirus variants. The new rules take effect Sunday, but officials said it would be a few days before they are fully in place.

The British government announced that anyone traveling to England on direct flights from China would be required to take a pre-departure test from Jan. 5.

France and Spain said they would continue to push for a Europe-wide policy.

France's hospitals have struggled in recent weeks with a large number of patients because of three concurrent outbreaks: the seasonal flu, a wave of bronchitis cases and covid-19.

Earlier, Spain's government said it would require all air passengers coming from China to have negative tests or proof of vaccination.

Health Minister Carolina Darias told reporters that Spain would be pushing for similar measures at a European level after the surge in cases in China. She said coronavirus health controls would be stepped up at Spanish airports.

Darias didn't specify when the new requirement would take effect.

Spain made the announcement after Italy said it would require coronavirus tests for airline passengers from China. Health officials from the 27-member European Union promised Thursday to continue talks on seeking a common approach but held back from imposing restrictions.

Information for this article was contributed by Michelle Fay Cortez of Bloomberg News (WPNS) and by staff members of The Associated Press.