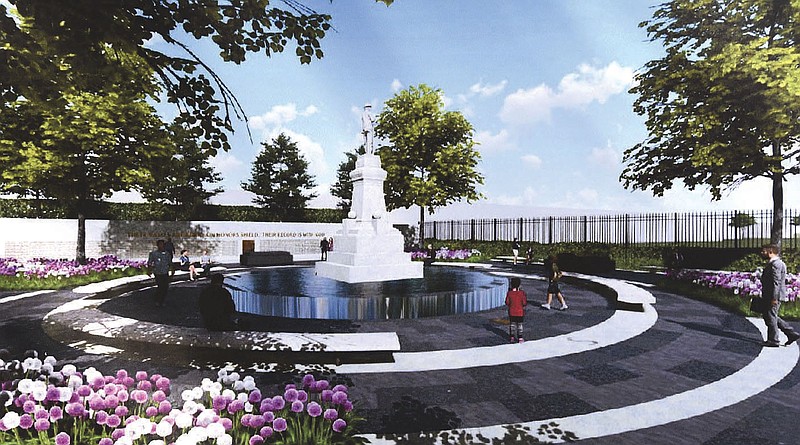 An artist's rendition of James H. Berry park in Bentonville with the Confederate soldier statue that was moved from Bentonville's square. The National Register of Historic Places has approved moving the monument to the park.

The city Planning Commission approved the large-scale development by a unanimous 6-0 vote with one commissioner absent.

The park will be at the southwest corner Southwest Fifth and Southwest F streets.

A groundbreaking will be held in early March, it was announced in January.

No parking is proposed with the park, but a standalone parking lot is being developed across Southwest F Street. The site is 0.44 acres and is zoned general commercial, according to planning documents.

The Confederate statue that was removed from the downtown square in September 2020 will be the centerpiece of the park.

The monument had stood on the square since 1908. It's stored in an undisclosed location to be cleaned and restored, according to a January news release from Joey McCutchen, who represents the Arkansas United Daughters of the Confederacy. The group owns the statue.

The monument has been listed on the National Register of Historic Places since 1996. It's the first Confederate monument to be moved and remain on the register, McCutchen said.

The park design phase is nearing completion, and construction will begin soon, according to the release. Designs for the park were unveiled in September 2020.

The park will be adjacent to the Bentonville Cemetery. The Benton County Historical Society owns the park, which will be open to the public.

The monument, which consists of a pedestal and a statue of a bearded Confederate soldier, was on property owned by Benton County on the downtown square. The city of Bentonville maintained the property, including beautification.

Berry was a Civil War officer, lawyer, Arkansas legislator, speaker of the state House of Representatives and circuit judge for the 4th Judicial District. He was elected Arkansas' 14th governor, then served as a U.S. senator from 1885 to 1907, according to the Encyclopedia of Arkansas.

The large-scale plan for the Village at Tara Ridge also was approved 6-0 by the Planning Commission.

The site area is 18 acres and is zoned medium-high density multifamily residential, according to planning documents.