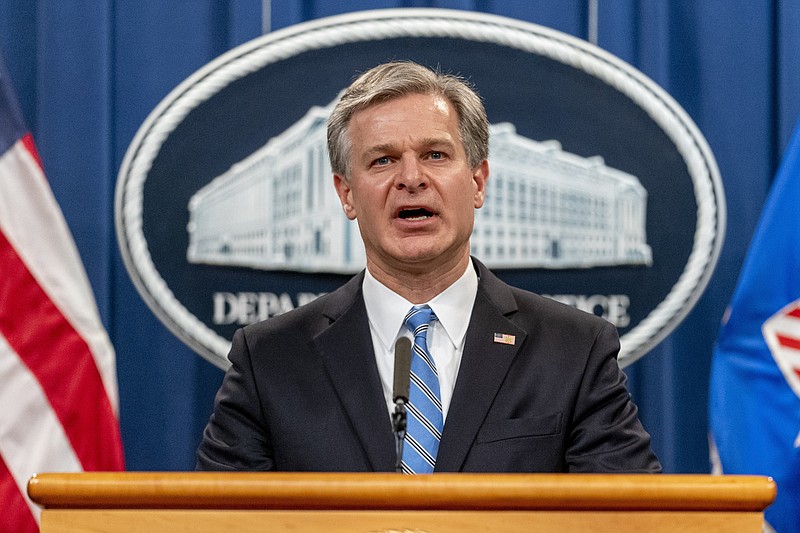 FILE - FBI Director Christopher Wray speaks at a news conference at the Justice Department in Washington, on Nov. 8, 2021. Wray says the threat to the West from the Chinese government is &quot;more brazen&quot; and damaging than ever before. In a speech on Jan. 31, 2022, at the Reagan Presidential Library in California, Wray accused Beijing of stealing American ideas and innovation and launching massive hacking operations. (AP Photo/Andrew Harnik, File)

WASHINGTON -- The threat to the West from the Chinese government is "more brazen" and damaging than ever before, FBI Director Christopher Wray said Monday night in accusing Beijing of stealing American ideas and innovation and launching massive hacking operations.

The speech at the Ronald Reagan Presidential Library in Simi Valley, Calif., amounted to a stinging rebuke of the Chinese government just days before Beijing is set to occupy the global stage by hosting the Winter Olympics. It made clear that even as American foreign policy remains consumed by Russia-Ukraine tensions, the U.S. continues to regard China as its biggest threat to long-term economic security.

"When we tally up what we see in our investigations, over 2,000 of which are focused on the Chinese government trying to steal our information or technology, there's just no country that presents a broader threat to our ideas, innovation and economic security than China," Wray said, according to a copy of the speech provided by the FBI.

The bureau is opening new cases to counter Chinese intelligence operations every 12 hours or so, Wray said, with Chinese government hackers pilfering more personal and corporate data than all other countries combined.

"The harm from the Chinese government's economic espionage isn't just that its companies pull ahead based on illegally gotten technology. While they pull ahead, they push our companies and workers behind," Wray said. "That harm -- company failures, job losses -- has been building for a decade to the crush we feel today. It's harm felt across the country, by workers in a whole range of industries."

Chinese government officials have repeatedly rejected accusations from the U.S. government, with the spokesman for the embassy in Washington saying last July that Americans have "made groundless attacks" and malicious smears about Chinese cyberattacks. The statement described China as a "staunch defender of cybersecurity."

The threat from China is hardly new, but it has also not abated over the past decade.

"I've spoken a lot about this threat since I became director" in 2017, Wray said. "But I want to focus on it here tonight because it's reached a new level -- more brazen, more damaging, than ever before, and it's vital -- vital -- that all of us focus on that threat together."

The Justice Department in 2014 indicted five Chinese military officers on charges of hacking into major American corporations. A year later, the U.S. and China announced a deal at the White House to not steal each other's intellectual property or trade secrets for commercial gain.

Wray highlighted the case of a Chinese intelligence officer who was convicted of economic espionage last November for targeting an advanced engine by GE that Chinese state-owned enterprises were working to copy.

But there have also been some setbacks. Though the FBI director mentioned that the bureau was working to protect academic research and innovation at American colleges and universities, he did not discuss the much-criticized China Initiative.