Smith hits key buckets, but not pleased with rivalry-game effort 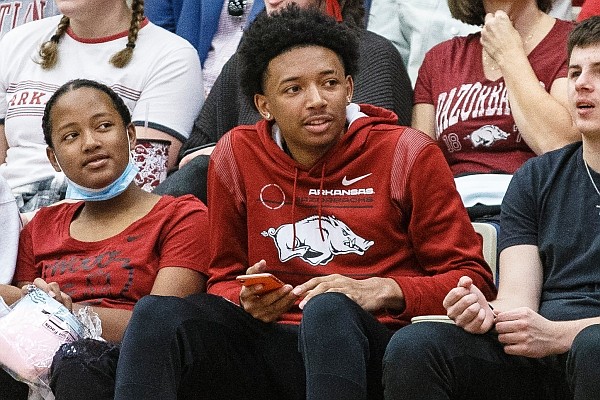 Arkansas basketball commit Nick Smith watches the Razorbacks' Red-White game on Sunday, Oct. 17, 2021, during the first half of play at Barnhill Arena, Fayetteville.

ESPN 5-star and Arkansas signee Nick Smith hit the shots that sent North Little Rock into overtime and on to victory over Little Rock Central on Tuesday, but afterward he was not too pleased.

He felt the No. 1 Wildcats underperformed against the Tigers.

“I’m not too happy about how the game went,” Smith said. “We had a lot of mental lapses, but I’m pretty sure this week moving on forward we’re going to have a couple of hard practices.”

“I was just trying to put my team in the best position, because my shot wasn’t falling, so I knew for a fact my floater was going to go in eventually and it went in," Smith said.

ESPN’s No. 6 player nationally wants the ball in pressure situations and that showed when he hit the game-winner in overtime.

“I obviously wasn’t going to pass up an opportunity to win the game, because I’m going to bet on myself every time,” Smith said.

He, along with senior teammate Corey Washington, visited Fayetteville for the Razorbacks’ 77-68 victory over West Virginia in the SEC/Big 12 Challenge on Saturday.

“I was very comfortable,” he said. “I know the guys like my brothers. Walking around campus, it was a good thing and hopefully I'll be back there soon.”

Smith, who also had offers from Kentucky, Alabama, Auburn, Kansas, Tennessee, North Carolina, Ole Miss, Oklahoma, Texas and other programs, said he and members of ESPN’s No. 3-ranked class are ready to help Arkansas continue winning.