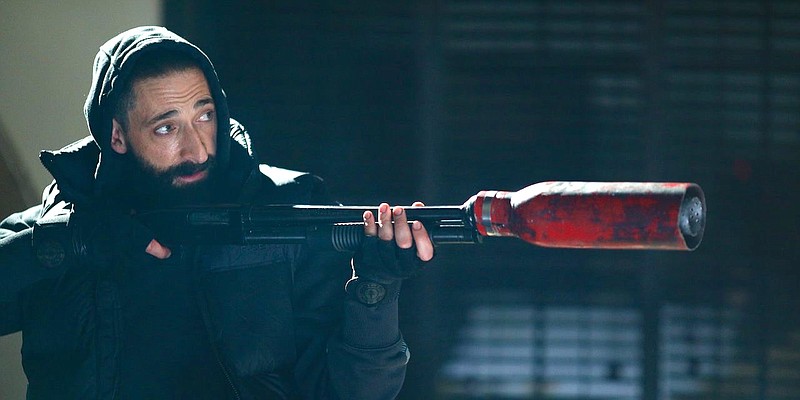 A ripped and bedraggled Adrien Brody — who reportedly got down to “zero body fat” — plays an avenging garbageman in the revenge thriller “Clean,” which Brody also co-wrote and scored.

Adrien Brody plays a garbage man with an ax to grind in director Paul Solet's dour and abrasive crime drama "Clean." Co-written and co-produced by Brody, the film has a lot in common with other movies of its kind. You have the quiet and brooding loner with the dark and mysterious past. There's the longing for and vain attempt at some semblance of a normal life. Then (of course) there's that one event that provides the catalyst for the movie's big violent finish.

All of those story beats may ring familiar, but Solet and Brody approach their material in a way that almost gives the illusion of something fresh. It's found in their strangely slow and pensive pacing. "Clean" takes its time unpacking its main character, giving just as much attention to his psychology as his more "savage" physical abilities. It even begins with grim yet hammy philosophical narration that features lines like "I'm still looking for answers. I just don't know the questions anymore."

With his pale complexion, tired eyes, thick black beard and a gravelly snarl, Brody plays a man called Clean. He drives a trash truck route around the outskirts of New York, collecting old scrap for himself along the way. At home, in a dried-up forgotten part of town, he uses the scrap to fix up old junked appliances which he sells to a local pawn shop owner (RZA) for cash. When he's not running his truck, he's repainting abandoned neighborhood houses. It's a mundane ritual, but it keeps him focused on something other than his dark impulses.

The one shimmer of light in his otherwise gloomy life is a young girl from his neighborhood named Dianda (Chandler Ari Dupont). Each day Clean fixes her lunch and drops it off before she heads to school. It's a sense of paternalism that stems from a traumatic bond the two share. Dianda lost both of her parents and now lives with her grandmother. Clean is tortured by a particularly devastating tragedy from his past (as these character types usually are). He lost his daughter, a victim of a lifestyle he brought into their home. Helping Dianda is his self-imposed act of penance.

The film's big baddie comes in the form of a local drug kingpin named Michael (Glenn Fleshler). He's your standard issue movie hood -- part gangster, part sociopath. He operates out of a local fish market where he runs a tight ship. The one thorn in his side is his apathetic son Mikey (Richie Merritt) who would rather hang out with his friends smoking weed and listening to hip-hop than learning the family business.

Without getting into the details (not that they matter much), Dianda gets sucked in by some local hooligans, which quickly turns Clean from good shepherd to avenging angel. It begins a violent chain of events, eventually putting Clean in Michael's crosshairs. From there it careens toward its inevitable climax -- one that's brutally exhilarating to a point, but with little in terms of originality. Think of it as a dialed-down "John Wick" minus the style. Or maybe "Taxi Driver" but with a grittiness that often feels manufactured rather than inherent to the storytelling.

On the positive side, Zoran Popovic's cinematography creates plenty of atmosphere while Timothy Whidbee's production design squeezes out everything it can from the film's shoestring budget. The locations and Solet's attention to them provides an effectively gloomy setting which may not sound like a compliment, but it actually serves the story well.

The movie is also helped by a really strong Adrien Brody performance. Considering some of his more recent roles, it may be easy for some to forget how good of an actor he really is. To the 48-year-old's credit, he pours himself into the character, fully committed and fittingly stoic. He brings a hard-edged physicality to the action scenes, but he's also good in the quieter moments. For example he shares some strong scenes with Mykelti Williamson who plays Clean's sponsor. Their barbershop therapy sessions are when the film feels its most honest.

Despite Brody's best efforts, there is still something undeniably derivative about "Clean." The performances are solid, the setting is authentic, the bursts of gruesome violence are well shot and have a basis in the story. There are even moments of real sincerity and pathos. Yet at its core there's really nothing here we haven't seen many times before. It's a nagging reality that I never could shake and that zaps the movie of its urgency.

It's unfortunate really because this is clearly a passion project for Brody. But at this point, if you're going to do "the moody guy seeking redemption for his violent past" story you need to bring something fresh to the story. The film's early patience teases that. But in the end it's hard to find anything particularly new or surprising.