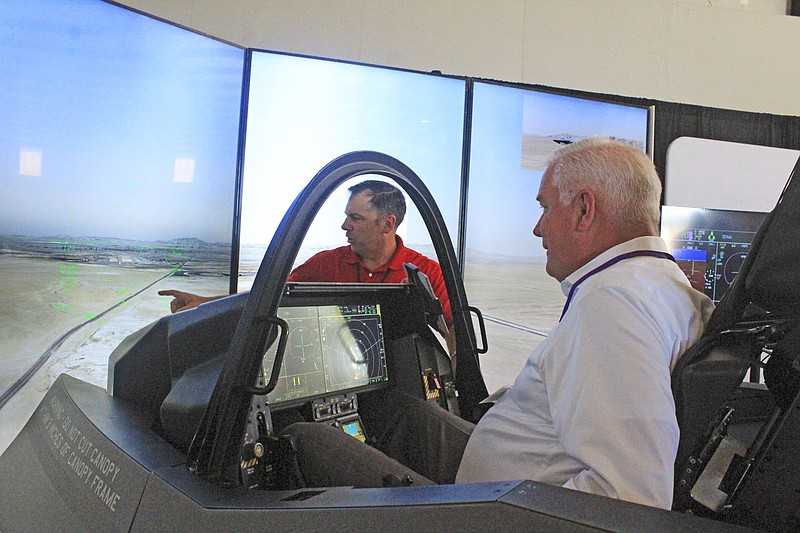 FORT SMITH -- The Air Force held the second of two online public scoping meetings Thursday to discuss the proposal to place a permanent Foreign Military Sales Pilot Training Center at Ebbing Air National Guard Base in Fort Smith, as well as answer questions and hear feedback from the public.

Ebbing was selected last year as the Air Force's preferred location for a pilot training center for Singapore and other countries participating in the Foreign Military Sales program. The proposal would accommodate up to 24 foreign Lockheed Martin F-35 Lightning II aircraft and move 12 General Dynamics F-16 Fighting Falcons from the Singapore air force, currently at the Luke Air Force Base at Glendale, Ariz.

Residents largely spoke in support of the mission, with questions regarding how they can welcome Singaporeans, when contractors can bid on construction projects and when aircraft will start arriving.

Three people raised concerns regarding potential noise levels the program would bring and whether it would affect surrounding residents. Air Force officials said no noise studies have been done because it's too early in the process.

Patrick Jeanes of the Air Force's Air Education and Training Command said the move would require increases in personnel, changes in aircraft numbers and operations, and construction or renovation to support the F-16 and F-35 aircraft, as well as a two F-35 flight simulator facilities. He said Ebbing could expect 384 military and civilian personnel -- which would be accompanied by dependents -- and about 3,500-6,600 annual flights, with 10%-15% done between 10 p.m. and 7 a.m.

Jeanes said the Singapore air force must leave Luke Air Force Base so the base can accommodate incoming F-35 aircraft. He said Ebbing would eventually host various countries' air force personnel over the course of the program, including Poland and Finland, and the base could remain indefinitely.

David Martin, environmental impact statement project manager from the Air Force's Civil Engineer Center, said it's too early in the process to answer a lot of the questions, especially considering Fort Smith hasn't been officially chosen as the program site.

A couple of people questioned whether the Fort Smith Regional Airport runway extension is also a part of this project.

During the public comment portion Carl Geffken, city administrator said the extension is a city project for economic development.

"We are very much in favor of this project coming to Fort Smith, and most importantly the city, Sebastian County and the state of Arkansas have been willing and able to do what's necessary in order to secure this project," Geffken said.

"The EIS process began with a notice of intent that was published in a federal register on Jan. 14, This began the formal scoping period, which ends on Feb. 14, 2022. Please note, all scoping comments must be received or postmarked by Feb. 14, 2022. We anticipate having a draft EIS out for public review and comment in the summer of this year, and a final EIS in early 2023," Martin said.

While Ebbing is the preferred location, the Air Force chose Selfridge Air National Guard Base in Harrison Township, Mich., if the center couldn't be at Fort Smith for some reason.

Roughly eight Harrison Township, Mich., residents also spoke during the public comment portion to request Selfridge Air National Guard Base be chosen for the program instead.

"We'll embrace the Air Force. We do have a history of having F-16s in the area," Fort Smith Mayor George McGill said. "We appreciate the information you are providing to the community, and we look forward to meeting everyone and greeting everyone. Our schools are prepared to meet your students and your children when they arrive, as well. We're looking forward to it, and when you do an honest assessment of our base you're going to find it has everything that you need to provide a successful mission."

More information and ways to submit scoping comments on the proposed action can be found at www.FMSPTCEIS.com.