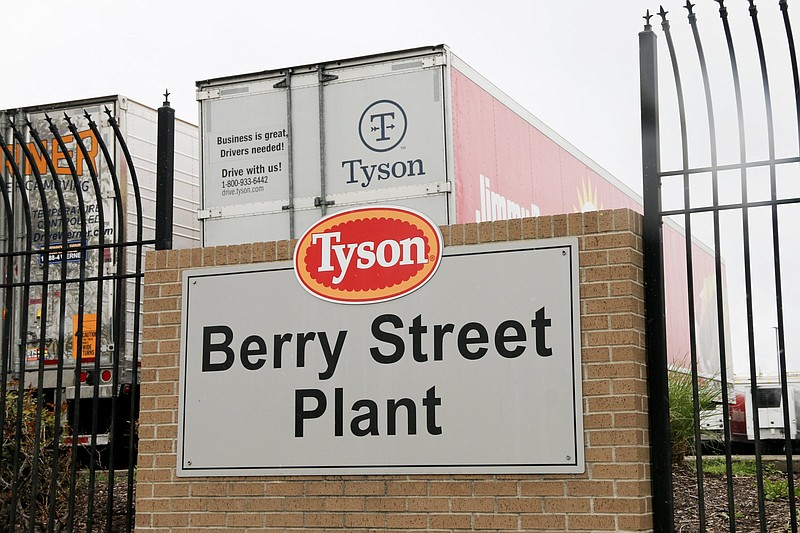 In this image from the Howard Center for Investigative Journalism at the University of Maryland's Philip Merrill College of Journalism, a Tyson Berry Street Plant sign is seen in front of the Springdale, Arkansas, Tyson parking lot for hauling chicken products, April 20, 2021. The Berry Street location had more than 400 COVID-19 cases among the workers, the highest number of cases across Arkansas poultry plants. (Abby Zimmardi/University of Arkansas via AP)

Sales and profits improved despite continued labor challenges and inflationary pressures that increased the cost of grain, transportation and other goods by 18%, said Donnie King, Tyson president and chief executive officer, in a conference call with analysts. To offset these costs, sales prices rose on average 19.6% compared with the previous year.

Sales climbed 23.6% to $12.93 billion. The number of products sold increased by less than 1% as effects from the coronavirus pandemic continue to hamper supply chains and labor.

Net income more than doubled to $1.12 billion on fatter margins.

These results come after months of criticism from the Biden administration toward the four largest meat conglomerates, accusing them of profiteering during the pandemic at the expense of consumers, farmers and ranchers. Trade groups and economists dispute these claims, pointing to input challenges along with record demand.

During the quarter, sales improved across all segments of Tyson Foods, with the most growth happening in beef and chicken. All segments posted significant profit growth, except prepared foods and international sales because of increased raw material costs.

In a research brief, he said this strong start to the year underscores the solid footing Tyson has in the market, as well as management's commitment to buying fewer supplies from competitors.

In the beef segment, sales grew 25% to $5 billion on fewer items sold and were offset by higher prices. Sales volume declined 6% compared with the same quarter a year ago. Average prices rose 32%.

Operating income was $140 million compared with a loss of $216 million. Margins were nearly 4%.

In the prepared-foods segment, sales climbed 10% on fewer items sold and were offset by higher prices. Sales volume declined nearly 3% from the previous year attributed, in part, to the sale of Tyson's pet treats business. Average prices rose 13%.

In the international segment, sales improved 17% to $550 million on more items sold and higher prices. Sales volume increased 9% from a year ago. Average prices rose 8%.

Operating income declined 18% to $9 million. No margin data was available for this segment.

During the quarter, Tyson returned cash to shareholders through $164 million in dividends and $348 million in share repurchases.

Operating cash flow improved to $1.43 billion and total liquidity totaled $5.2 billion. Capital expenditures increased to $400 million and Tyson's leverage ratio was below its target rate in the three months that ended Jan. 1, 2022.

For the rest of the year, Tyson is expecting to generate sales up to $51 billion on incremental volume growth and solid margins. King said he expects market and labor factors to normalize as effects from the pandemic wear off.

The nation's largest meat-producing company is one of the few to require covid-19 vaccines among all workers. King said this was beneficial against the omicron variant and has already improved absenteeism and turnover rates in the plants.

"I'm more excited about the future of Tyson Foods with each passing day," King said.