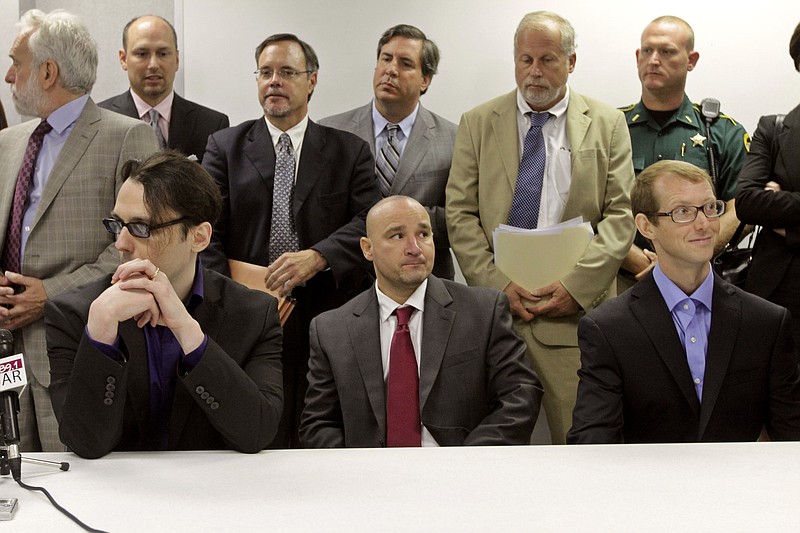 Chrestman cited three primary ways in which he said Echols' petition fails to meet the requirements: It's filed in the wrong county, Echols is no longer a state prisoner and the petition was filed more than three years after his conviction.

It's "a one-shot deal that forever alters it," according to the prosecutor.

Echols, Jason Baldwin and Jessie Misskelley were convicted in 1994 for the murder of three 8-year-old boys -- Christopher Byers, Steve Branch and Michael Moore -- whose bodies were discovered the previous year in a drainage ditch near West Memphis.

The case, which got nationwide attention, became known as the West Memphis Three case.

While no DNA evidence connected Echols, Baldwin and Misskelley to the murders, the three were convicted and sent to prison for nearly 20 years. In 2011, they were released from prison as part of an agreement known as an Alford Plea. Under the plea, Echols, Baldwin and Misskelley maintained their innocence but pleaded guilty in exchange for an 18-year sentence, plus time served.

They've since been trying to clear their names. The latest effort is focused on advanced forensic testing of some remaining evidence from the crime scene.

In his filing on Tuesday, Chrestman wrote that a judge will have the final say regarding Echols' petition.

"We must follow the law," wrote Chrestman. "And under the law, the Court -- not a prosecuting attorney -- determines whether seized evidence in a closed case can undergo further DNA testing."

But Chrestman was obviously arguing against it.

Among other things, Chrestman wrote, Echols' Act 1780 petition was filed in the wrong county.

"This error is fatal," according to the prosecutor.

In his filing, Chrestman described Echols' request as a habeas corpus writ. The phrase is Latin for "that you have the body." A writ of habeas corpus is used to bring a prisoner or other detainee before the court to determine if the person's imprisonment or detention is lawful, according to the Legal Information Institute at Cornell Law School.

"When the State has no one in custody to bring to court, habeas corpus isn't an available remedy," wrote Chrestman. "To allow a non-prisoner to seek Act 1780 relief would make the habeas corpus statute absurd. Under statutory law, if new DNA testing -- like Defendant seeks -- excludes him, the circuit court has two options: grant a new trial or resentence.

An Act 1780 habeas corpus petition must be filed within 36 months of conviction, wrote Chrestman.

"Here Defendant was convicted more than 36 months ago," according to the prosecutor's filing.

Chrestman wrote that the state presumes that Echols is asserting that M-Vac DNA testing is "a new technology that's substantially more probative than prior testing."

If so, the court would need to determine whether M-Vac is a generally accepted scientific testing method and whether it violates the requirement that physical evidence in violent-offense cases must be preserved, wrote Chrestman.

"Physical evidence in violent-offense cases must be preserved permanently," he wrote. "Indeed, the failure to do so can be a crime. M-Vac appears to violate this requirement. The State understands that M-Vac cleans physical evidence through its wet vacuum collection process. So M-Vac -- rather than preserving physical evidence -- is a one-shot deal that forever alters it. Since the use of M-Vac would violate statutory law, it isn't a viable testing method. And if it isn't a possible testing method, the Court can't grant Defendant's request."

Echols would have to show that the proposed testing's new evidence would establish actual innocence, wrote Chrestman.

Given the trial evidence, "another person's DNA at the crime scene wouldn't prove Defendant innocent," so the court can't grant his petition, according to the prosecutor.

"But since then, the circumstances have changed," wrote Chrestman. "In 2002, Defendant was imprisoned; now, he's free. In 2002, the suggested testing was ordinary DNA analysis; now, the proposed testing would forever alter the physical evidence. And since 2002, the law has changed and become more stringent. Mindful of these things, the State cannot agree to the Court granting Defendant's Petition to Conduct Additional DNA Testing."