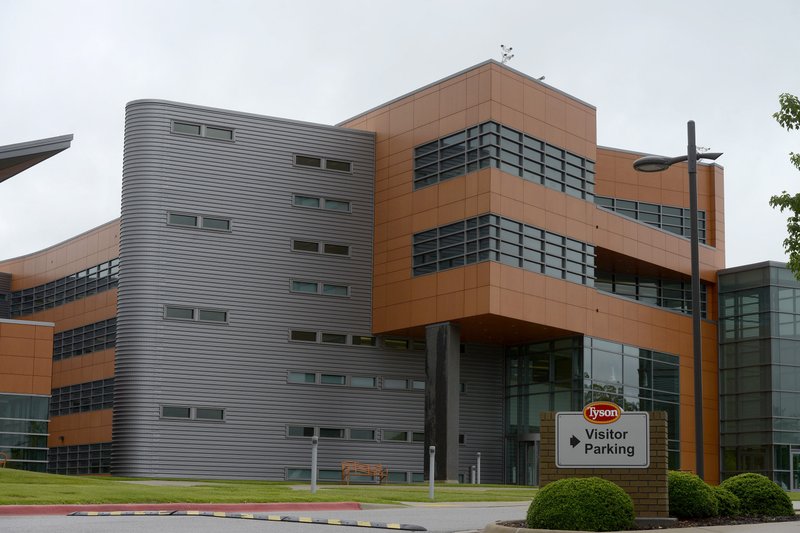 The Tyson Technology Center at Tyson World Headquarters in Springdale.

A majority of shareholders approved proposals that reduced the number of directors on the board from 15 to 13 for fiscal 2022 and ratified the selection of PricewaterhouseCoopers LLP as the independent registered public accounting firm for Tyson.

A proposal that would have required Tyson to report on its plastic packaging use was rejected, under guidance from the board of directors.

Tyson started the year off strong, generating solid sales and doubling profits compared with the first quarter of 2021. Tyson leadership is optimistic about the rest of the year, forecasting annual sales between $49 billion and $51 billion.

Gaurdie E. Banister and Robert Thurber, who have been members of the board for more than 10 years, exited the company.

The meeting was conducted at a Holiday Inn in Springdale at 10 a.m. and broadcast online for shareholders.

PricewaterhouseCoopers LLP, founded in 2002, provides accounting services for Walt Disney, Goldman Sachs, Ford Motor Corp. and IBM, to name a few. It charged Tyson Foods more than $7 million in audit, tax and other fees in fiscal 2021, according to a proxy filing.

The final proposal, filed by Green Century Capital Management Inc., asked Tyson to improve its sustainability goals by reducing the amount of plastic packaging is uses.

It is estimated that less than one-tenth of all plastic is recycled, with most of it going to a landfill or out into the environment where it can endanger animals, according to the United Nations Environment Programme. The production and pollution of plastic also contribute to climate change.

In the proposal, Green Century Capital said Tyson uses a significant amount of problematic plastic packaging, such as films used to wrap meats and polystyrene foam in trays.

In Tyson's opposition statement, the company said it shares the same sentiment as Green Century Capital and is working toward innovations in sustainable packaging. In the past two years, it has increased the amount of post-consumer recycled content in plastic packaging across the business and is developing replacements for polystyrene foam trays and sustainable alternatives to polyvinyl chloride film.

The company recognized there are limitations to recycling, for example, plastics that have been in contact with raw meat and blood are not acceptable for recycling. Despite certain challenges, Tyson said it is committed to developing sustainability efforts.

"Given our current practices and disclosures, the board believes that the proposal's requested report would not provide material benefits or additional disclosure not already available to shareholders, and therefore, this proposal is not in the best interests of the company or its shareholders," Tyson said in a proxy filing.