Questions raised over whether rescue plan money can be used for project by Tom Sissom | February 13, 2022 at 1:07 a.m. 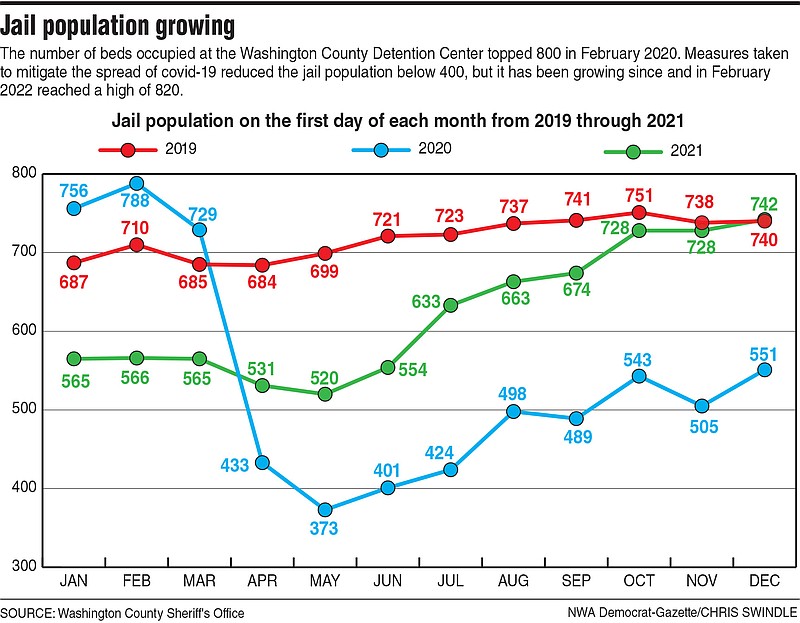 FAYETTEVILLE -- A proposed $20 million expansion to the Washington County Detention Center has some justices of the peace at odds over both the merits of the project and how the county might pay for it.

Sheriff Tim Helder has proposed a 232-bed expansion, with additional space to reduce health and safety risks associated with the covid-19 virus.

Jim Langford, with Spirit Architecture, told the Quorum Court's Jail/Law Enforcement and Courts Committee on Monday if the county began "moving forward expeditiously," the project could be bid in September and construction begin in October. The entire project could be completed in the spring of 2025, Langford said.

The 232-bed expansion would be accompanied by additional space for the jail's intake area, separate spaces to quarantine male and female detainees and an enlarged medical space to provide additional beds and negative pressure cells to prevent the spread of airborne particles and pathogens, according to Langford.

The expansion would also increase the space in pods with separate return air units. Extra space for food storage and general supplies would also be added.

Patrick Deakins, justice of the peace for District 5 and a candidate for county judge, suggested after Tuesday's Finance & Budget Committee meeting the county could use federal American Rescue Plan Act money to pay for the jail expansion. The Finance & Budget Committee approved placing $10 million of the county's $23 million in 2022 rescue plan money into a separate fund with fewer restrictions on how the money is used. That proposal will be considered by the full Quorum Court when it meets Thursday.

Deakins said he supports using the rescue plan money to pay for the $20 million jail expansion.

Eva Madison, justice of the peace for District 9, said federal guidelines on the use of the money don't clearly allow for projects like the jail expansion. Madison said the county should seek some outside opinion on the legal limits for using the money to reduce the risk of having to repay it later if the federal government deems the project ineligible.

Madison also said the announcement by Gov. Asa Hutchinson on Thursday that the state plans to add 498 prison beds as part of an effort to relieve crowding in county jails should give Washington County pause before deciding on its own expansion project.

"We should also wait to see what the state is going to do in regard to taking our post-trial folks more quickly," Madison said.

Deakins said the state plans were a start, but he characterized the 498 beds as a drop in the bucket. Figures from the state Department of Correction show about 2,250 people who have been sentenced to state prison terms are still in county jails statewide. Deakins also said he doesn't think the county should just wait while the state prison system adds the new space.

"We have immediate needs and concerns," he said.

Helder said the expansion is needed so the jail can operate through the covid pandemic and be prepared for any future pandemics. He said accommodating growth in the detainee population would require a separate, larger addition to the jail.

"This is the smart move to manage covid or another pandemic," Helder said. "This just gives us a little bit of time before we have to do something about the overcrowding issue."

Helder said the jail reached a population of 802 detainees in February 2020, just before the covid-19 pandemic began. The Sheriff's Office worked with Prosecuting Attorney Matt Durrett and the circuit judges to release detainees charged with nonviolent offenses who weren't deemed to be a danger to the community, and the jail population dropped to 373 in May 2020. Since then, Helder said, the population has been steadily increasing. It hit a new high of 820 on Monday.

Helder proposed an expansion to the jail in 2018. That plan would have added 600 beds and cost $30 million. The project would have been paid for through a temporary increase in the countywide sales tax.

The Quorum Court balked at that proposal and commissioned a study of the county's criminal justice system by the National Center for State Courts. The $60,000 study recommended the county expand services for pretrial detainees to avoid the need for them to be incarcerated, with suggestions including lower bond amounts, a mental health court, expanded mental health and substance abuse services, electronic monitoring and reminder services for those released. A Criminal Justice Coordinating Committee was established to bring together the different elements of the criminal justice system to consider these issues.

Lance Johnson, justice of the peace for District 1, is a member of the Criminal Justice Coordinating Committee. Johnson said his view is the types of services and programs being considered won't adequately address the problems at the jail.

"I'm of a mind that we're going to have to expand the jail regardless," Johnson said. "The issue is to find a way to do it. The county has got a lot of money right now, and I absolutely think we should use it."

Suki Highers, justice of the peace for District 11, said she questions whether the county can legally use the rescue plan money for jail construction, and she also thinks doing so would be contrary to the intent of the federal relief program.

"I think this is once-in-a-lifetime money that could be used to benefit a lot of our citizens who have been suffering as a result of covid," Highers said. "I'm pretty disillusioned that all of the things we've discussed that could help people with housing, with food, with child care, with mental health needs, we really haven't done any of them, and we're back to square one with them. I don't think this is really appropriate. This is something they wanted to do before covid, and now they've found a loophole that will allow them to do it."

Evelyn Rios Stafford, justice of the peace for District 12, said she doesn't think a long-term project like the three-year jail expansion is a proper use of the covid-relief money.

"To me, this feels like an end-run around the whole reason why we got this money," Stafford said. "It was to help local communities, to get them through the pandemic. It's hard for me to see something that won't be available until 2025 as being covid-related. We're in covid right now."

Stafford also said the county should be using the rescue money on programs like those recommended by the National Center for State Courts study.

"Let the Criminal Justice Coordinating Committee do its work," she said. "Fund everything from the study. People everywhere have found that jail is the most expensive way of dealing with people who have problems, especially those who are nonviolent. We've done almost nothing with those recommendations."

Sarah Moore, with the Arkansas Justice Reform Coalition, said she doesn't think the jail expansion is allowed for under the federal guidelines for the money. Moore also said using the money to add to the jail while people in the community are hungry or homeless is immoral.

"Since November 2020, we've seen very little willingness from the majority of the Quorum Court to take care of the needs that have been growing in our community due to the pandemic," Moore said. "A building program that's years down the road is not a quick response to covid."

The American Rescue Plan provides $350 billion in federal money for eligible state, local and tribal governments to enable them to continue to support the public health response to the covid-19 pandemic and lay the foundation for a strong and equitable economic recovery. In addition to helping address the revenue losses as a result of the crisis, officials say it will help cover the costs incurred due responding to the public health emergency and provide support for a recovery — including through assistance to households, small businesses and nonprofit groups, aid to impacted industries and support for essential workers. It will also provide resources for state, local and tribal governments to invest in infrastructure, including water, sewer and broadband services. 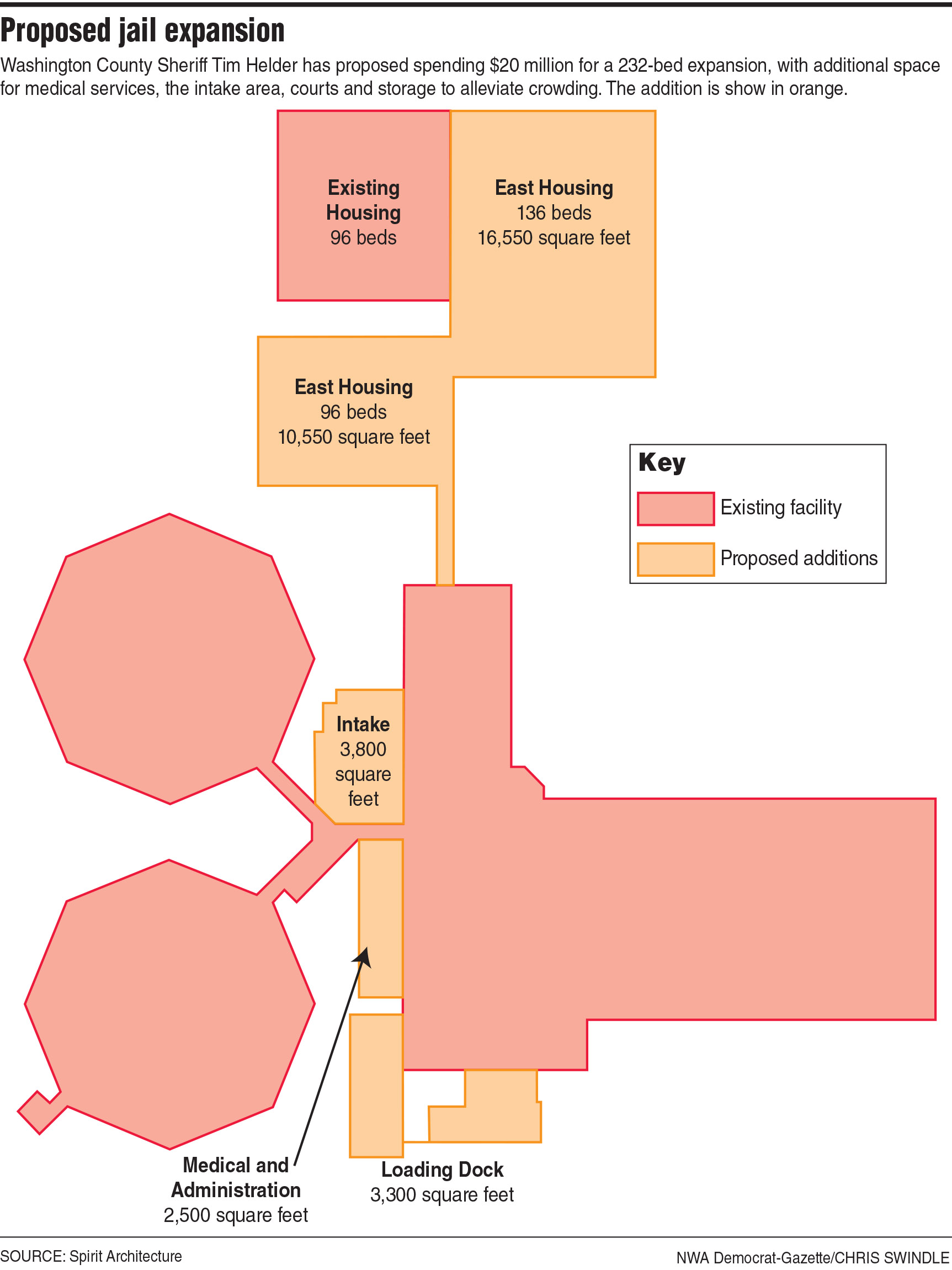