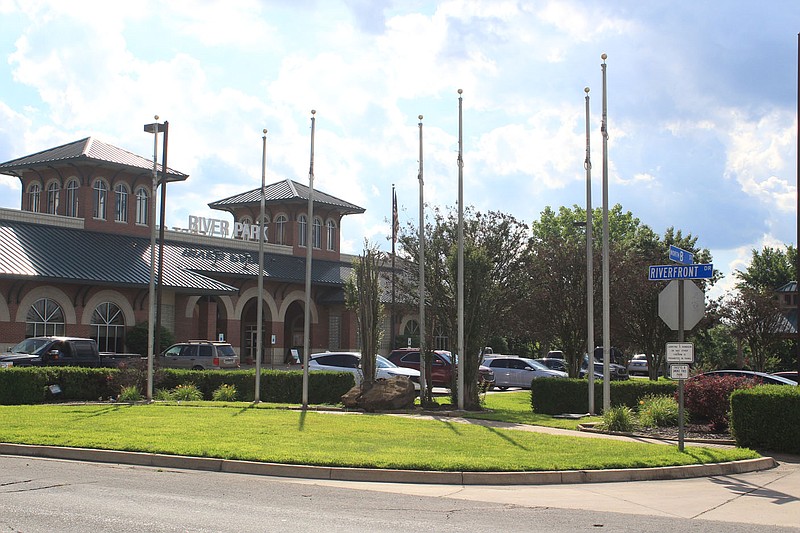 The empty flagpoles at Fort Smith's Riverfront Park are seen Thursday, June 3, 2021, after the removal of the seven historic flags that have flown over the city. (NWA Democrat-Gazette file photo)

With objects of recognition including flagpoles and plaques, city officials across the state are wondering how a 2021 monument protection act will affect future efforts to honor people and events.

The Arkansas State Capitol and Historical Monument Protection Act, or Act 1003, which became law in April 2021, prohibits the removal, relocation, alteration or renaming of a memorial on public property.

"The bottom line is that the City does not want to inadvertently violate this Act, so that is why I am seeking your guidance on this," Ernest Cate, the city attorney for Springdale, said in an email to the Arkansas Department of Parks, Heritage and Tourism in regards to the possibility of placing plaques on a walking trail.

Cate's email was included in the department's response to a Freedom of Information Act filed several weeks ago by the Arkansas Democrat-Gazette.

The History Commission is part of the Division of Arkansas Heritage, which is within the state Department of Parks, Heritage and Tourism. The department is accepting public comments on the proposed rules for Act 1003 through Feb. 17.

Jeff LeMaster, department spokesman, said the agency would be able to give more information about the rules and the process once the public comment period is over.

"Given our public comment period is still open, we would prefer to wait until after that has closed to provide any more feedback about the rules for the Historic Monument Protection Act," he said.

Springdale was one of the first Arkansas cities to reach out with questions about the act and what it means for city-based projects.

Cate, the city attorney for Springdale, wrote in May about a boy who was working on an Eagle Scout project that would involve the placement of plaques along Razorback Greenway Trail to commemorate certain individuals who have had an impact on the community.

"My specific question is whether or not this proposed project would trigger the requirements of [Act 1003] which appears to require an application process before any new plaque could be erected and dedicated on City property," Cates wrote. "If this young man's project would be subject to the Act, then the City would be interested in the application process, as it does not appear to have been created with the Act. ... I would appreciate any guidance that you or anyone at the Arkansas History Commission can give on this Act."

On another issue, the city of Springdale asked in October about moving a statue to storage while the building it's in front of gets demolished.

Cate said that several years ago, the city erected in front of the City Administration Building a memorial to a police officer who was killed in the line of duty in 1975. This memorial also included a memorial to several deceased chiefs of police and police officers. Cate said a new city administration complex is being built, requiring the statue to be moved to storage while the old building is demolished.

"My reading of [Act 1003] seems to indicate that if the memorial is to be removed for more than 60 days, that a waiver must be obtained from the Arkansas History Commission," he said in an email. "Given that Phase 2 of the new complex will take much longer than 60 days to complete, I wanted to get your input as to whether the City of Springdale is required to obtain a waiver from the Arkansas History Commission pursuant to the statute, or whether actions, as planned, would be in compliance, if not with the letter, but with the spirit and intent of this statute. We just want to make sure we do not inadvertently violate any provision of the law, so we are willing to take whatever actions you or the Commission deem necessary in this instance."

The History Commission's response to requests like these was usually to point out the rules weren't done yet and that time was needed before waivers could be submitted.

Gary Rogers, a claims representative with Farm Bureau Mutual Insurance Co. of Arkansas, contacted the department in September about a damaged monument located in St. Charles.

Jim Andrews, general counsel for the Arkansas Department of Parks, Heritage and Tourism, told the claims agent that state officials didn't have information relevant to the processing of an insurance claim and that rules didn't exist yet that might give guidance.

Leslie Fisken, chief of legislative affairs for the Arkansas Department of Parks and Heritage and Tourism, also replied in an email chain about the St. Charles monument that in her interpretation of Act 1003, if repairs to the monument require its removal, then the monument can be removed for temporary repairs for less than 60 days.

"If the repairs require that the monument be moved for longer than 60 days, then the City of Saint Charles will need to apply for a waiver from the Arkansas History Commission," she said.

Colby Roe, an attorney with the Daily and Woods law firm, contacted the Arkansas History Commission in September as a representative for the city of Fort Smith requesting a waiver to alter the city's flag display.

"This a matter of concern to the city of Fort Smith, since civil litigation over this matter is pending," he said.

The waiver was in regards to a flag display that was erected in 2001 that previously displayed the flags that have flown over Fort Smith since 1699. The flags included the French Fleur-De-Lis, the Spanish Cross of Burgundy, the French Tri-Color Flag, the U.S. 15-, 20- and 24-star flags and the Confederate flag.

Two years ago, the city tried to get new flags, but learned the vendor didn't sell Confederate flags any more. The city then decided the flags would not be reinstalled and instead decided to replace them with flags that represent the six branches of the military.

Roe said the city was requesting a waiver to go ahead with installing the new flags of each service branch while also maintaining flexibility as to the flags it seeks to display at the park.

Jim Andrews, general counsel for the Arkansas Department of Parks, Heritage and Tourism, told Roe in October that despite the Legislature's enablement, the commission will still be required by law to promulgate its rules in accordance with the Arkansas Administrative Procedure Act.

"Once finalized, these rules will provide the process for, among other things, seeking and issuing the waiver that you are now seeking," he said. "However, until the rule is promulgated and finalized, there is no action that the Arkansas History Commission can take."

Joey McCutchen, a Fort Smith lawyer, citing the Arkansas State Capitol and Historical Monument Protection Act, last year sued Fort Smith over the flag removal. McCutchen also made a Freedom of Information Act request of the department in November asking to see any waivers requested by an government entity pursuant to the new law. He also specifically asked for documentation related to the Fort Smith flag display and the Capitol Guards monument in Little Rock.

Contention around historical monuments became a national issue in 2017 when a woman was killed in Charlottesville, Va., during a Unite the Right Rally where white supremacists protested the removal of a statue of Confederate Gen. Robert E. Lee.

Across the country, statues, especially those honoring Confederates, were removed from public property by cities or toppled by demonstrators in the wake of protests over the death of George Floyd, a black man who was killed in 2020 by a Minneapolis police officer.

Several Southern states have had monument protection acts in place for several years, but Arkansas passed it in 2021.

Documents show that much of the inspiration for the proposed rules came from Tennessee.

"They are able to include much more detail in their rules as the legislation that has been passed (and amended) in Tennessee provides much more details regarding the waiver application process," Fisken said in an email from October. "I believe we should keep our rules aligned with Act 1003 and develop a waiver application and review process as a policy within the State Archives. Developing a policy in alignment with Act 1003 will provide us with more flexibility as to make any changes/updates to the process along the way."

Documents show that Fisken reached out to the Tennessee Historical Commission, where Patrick McIntyre Jr., executive director and state historic preservation officer for the neighboring state, warned her about the challenges this act can present.

"I also told her probably more than she wanted to hear about the burden this law might place upon the entity charged with administering it," McIntyre said in an email that was released to the Democrat-Gazette.

"It does help to understand the burdens of laws such as this," she said.