Little Rock cat show back after 19-year hiatus, with contests for fancy felines and pets 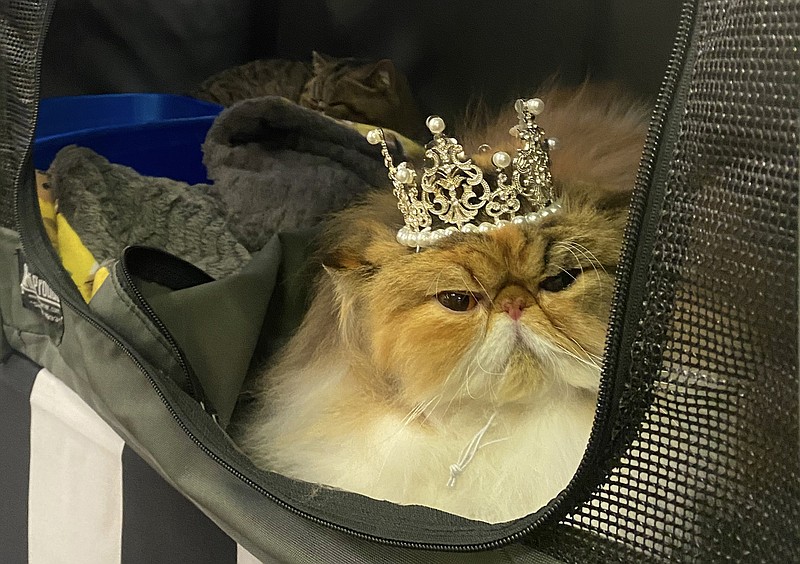 Fancy the cat relaxes in her carrier beneath her ribbons and a crown her exhibitor Kate Sain thought she deserved. (Special to the Democrat-Gazette/Kate Sain)

Kate Sain still cherishes memories of attending cat shows in Little Rock during the 1990s, "when they were huge! I loved going every year. It was a highlight of my childhood, with lots of fond memories of watching all the 'fancy cats.' I was in awe."

Then Sain moved to New York for college. She attended the national cat show there every year at Madison Square Garden. Meanwhile, the show in Little Rock faded away. The most recent one took place nearly two decades ago, as the sponsoring Arkansas Feline Fanciers was going dormant.

Back in Little Rock, Sain became even more of a cat person. When she started exhibiting her own cats last year, "I knew immediately that I wanted to 'bring cats back' to Little Rock and revive the local show."

Last summer she met the national Cat Fanciers' Association all-breed judge Pam Bassett, a University of Arkansas graduate, and learned that she had maintained the charter of Arkansas Feline Fanciers. "So I jumped in to make it happen," by working with others to re-create the once-popular event.

The revived show is scheduled for Saturday in the Hall of Industry at the Arkansas State Fairgrounds. Visitors unfamiliar with cat competitions can go to the Cat Fanciers' website at cfa.org to print out its "Cat Show Guide," or pick up a copy at the event's information table. The guide describes how a show works, and when and how visitors can interact with cats, owners and judges.

In terms of prominence, cat shows rank as the pet equivalent of the late Rodney Dangerfield, with his trademark line: "I don't get no respect." There's no feline-focused event anywhere near as widely watched as the nationally televised Westminster Kennel Club Dog show.

But statistics from the Humane Society of the United States show that American households are home to more pet cats (85.8 million) than pet dogs (78 million). Cats also out-star dogs in many popular and entertaining online pet sites.

In 2015, there were more than 2 million cat videos on YouTube alone. And CNN estimated the total count of cat photos on the internet at 6.5 million. Another source called the internet a "virtual cat park, a social place for cat lovers in the same way that dog lovers congregate at a dog park."

All cats competing in the Little Rock show must be registered with the Cat Fanciers' Association, the world's largest registry of pedigreed cats. It recognizes 42 breeds, including some that have almost become extinct. There are four competitive classes:

◼️ Premiership, for spayed and neutered cats that are still good examples of their breed.

◼️ Household pets, including mixed breeds, that must be spayed or neutered, but not declawed, and registered with the Cat Fanciers' Association.

At Saturday's show, six "rings" — smaller shows within the overall event — will run at the same time. Each will have its own trained judge, who also is an experienced breeder.

Spectators will find two kinds of rings. "All Breed" rings admit any of the association-recognized breeds, among them Abyssinian, Burmese, Persian and Japanese Bobtail. All-breed judges independently score every cat in the show.

"Specialty" judges focus strictly on longhair breeds (such as Maine Coons and Persians) or shorthairs (such as Burmese, Sphinx and Tonkinese) and grade every cat of its type in the show.

For pedigreed felines, the primary criterion is how the cat compares to official, written standards that set the breed's ideal example. Judges also consider grooming, health and condition, along with temperament, personality and other factors. For household pets, only these latter components are applied.

Once they've scored all the cats, each judge ultimately selects his or her choice of the top 10 in each of the four categories. This means that throughout the show, judges present a boatload of ribbons, whose colors and shapes are interpreted in the Cat Show Guide.

Hardly any cat show offers cash prizes. Instead, a cat can accumulate two different kinds of points. One type leads to a designation of grand champion (except for kittens).

With the second, in the three competitive classes, the 25 that have garnered the most points by the end of each show season are named regional or national winners. And that's as good an award as it gets in the cat world.

In Saturday's show, the winning cat in each class also will receive a special Jean Bassett Award honoring Pam Bassett's mother. The two have bred a record number of longhaired grand champions.

Along with watching the serious-side competition for awards, visitors should get plenty of chuckles at a couple of the Saturday show's features staged separately.

For example, imagine trying to convince your house cat to dress up for Halloween. The cat costume contest, held around lunchtime, proves it can be done. Usually. Those with costume-wearing cats can bring theirs along to compete, with no entry fee.

The agility course is relatively new in cat-show history. Dogs starred in such competition first, maybe because of cats' reputation for doing what they please rather than what you please.

[Video not showing up above? Click here to watch » arkansasonline.com/214agility/]

Saturday's course has hurdles of different heights, obstacles to climb, hoop jumps, weave poles and tunnels. Cats are timed and given points for each obstacle completed. Some take to it, others think it's a chance to put their owners in their proper place when they start waggling lures in front of skeptical felines' faces.

The world's largest and smallest breeds — Maine Coon and Singapura — will participate, and spectators are allowed to root and cheer, unlike during the judging shows. Visitors can bring cats with them to try out the agility course between races.

[Video not showing up above? Click here to watch » arkansasonline.com/214begin/]

And if you're thinking of adopting a feline pet, nonprofit rescue organizations will be on hand. They and the Cat Fanciers' Association website are chock-full of information.

Getting your pedigreed or pet cat ready to enter a show takes time and effort.

"They must get used to grooming, handling, all the background noises and activity, become comfortable with traveling and staying in hotel rooms and such," says Kathy Black, an all-breeds judge and highly respected breeder who'll work a ring Saturday. "Some are born showmen. Some will never like it."

Sain's cats seem to be born to compete, already having won ribbons galore as kittens. Having reached 8 months, they're now ready to take on the grownup champions.