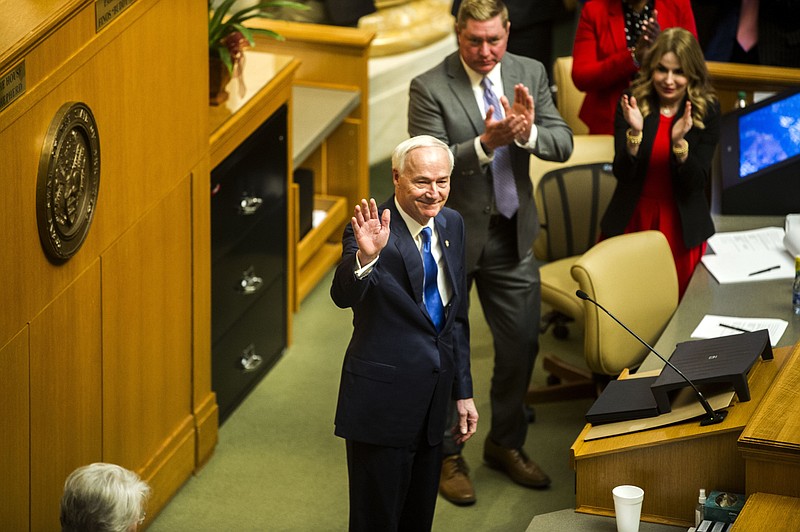 Gov. Asa Hutchinson waves goodbye at the end of his fourth and final State of the State address in the House chambers on Monday, Feb. 14, 2022. (Arkansas Democrat-Gazette/Stephen Swofford)

"Most importantly, this session will be remembered for our support of law enforcement," the Republican governor said during his eighth and final State of the State address to lawmakers to kick off the fiscal session.

In addition to looking ahead, the governor also recounted the major accomplishments of his administration.

Hutchinson's recommendation to use state surplus funds for a 498-bed addition to the North Central Unit in Calico Rock prompted a group of protesters to declare "no new cages" in a House of Representatives gallery, interrupting the governor's remarks. That led many lawmakers in the Republican-dominated Legislature to applaud the governor.

Afterward, House spokeswoman Cecillea Pond-Mayo said the House sergeant at arms estimated that 20 to 25 people were escorted out of the House chamber.

The governor told lawmakers that his proposed general revenue budget for fiscal 2023, which starts July 1, would significantly increase the pay of state troopers. He challenged cities and counties to boost the salaries of their law enforcement officers as well.

With an eye on the future, Hutchinson said, "I am challenging Arkansas to lead in this world of innovation by focusing on the future of advanced mobility," adding that he will create the Arkansas Council on Future Mobility.

The focus on the future of advanced mobility includes autonomous vehicles, upward mobility platforms, electric vehicles and modes of transportation that do no exist today but could be the dream of an Arkansas student, the governor said.

Hutchinson has proposed a general revenue budget of $6.04 billion for fiscal 2023, which the Legislature will consider in the fiscal session. The budget total would be a $194.6 million increase over the current fiscal year's budget. Most of the increase would be for public schools and human services programs.

The governor's proposal envisions leaving a $174.4 million surplus at the end of fiscal 2023.

Hutchinson aims to fund initiatives to reduce the waiting list for the developmentally disabled to receive services, to boost the salaries of state troopers to make their pay more competitive in the South, and to provide sufficient funding for the state's health insurance plans for public school and state employees and retirees.

Last week, the governor said the state Department of Finance and Administration now conservatively estimates the surplus will be about $500 million at the end of fiscal 2022 on June 30, up from its earlier projection of $264.4 million.

"This will be one-time payment from our surplus effective June 30 when the fiscal year ends," he said.

The one-time payment is designed to reward and incentivize these dedicated law enforcement officers, who keep the streets safe and homes protected, Hutchinson said.

He said the General Assembly enacted Act 786 of 2021 to create the public safety equipment program and that it was one of the recommendations of his Task Force on the Advancement of Law Enforcement that he convened after the death of George Floyd in Minnesota and the subsequent nationwide protests against police tactics.

The task force wanted to increase trust between police and local communities and to improve training, equipment and pay for law enforcement officers, Hutchinson said.

The grant program has received applications for funding to purchase items such as body cameras and bullet-resistant vests, he said. Hutchinson added that there are about $5 million in equipment requests from cities and counties but that "we don't have $5 million in that grant program."

Hutchinson said he recommends using $10 million of the one-time funding from the state's June 30 surplus to adequately fund the $5 million in applications and another $5 million for new requests from cities and counties.

After the governor's speech, Arkansas State Police spokesman Bill Sadler said the public safety equipment grant program has no current funding after 31 grants were handed out last year from the $500,000 provided to the program by Attorney General Leslie Rutledge.

"The actions of this General Assembly to fund more, pay more and to appreciate more will send the unmistakable message that in Arkansas we support and value our law enforcement officers," he said.

As part of this effort, Hutchinson said his proposed budget would significantly increase the pay of state troopers.

"[State police Director] Col. Bill Bryant has been a star in leading the state police, and the troopers are deserving of a more competitive salary," he said.

"I also challenge our cities and counties to step up to the plate and do more," Hutchinson said.

"Police funding must be a priority at every level."

The governor said the state currently has a record backup of state prisoners in county jails and that "this backlog must be remedied," so he recommended using one-time funds from the state's surplus to fund a new 498-inmate prison facility.

Hutchinson has said the expansion of the North Central Unit could cost between $60 million and $100 million.

"Let me emphasize that this need for a new facility is not a reflection of a change in incarceration policy. It is simply the fact that we have a growing state and we are growing in projections of 1.4% [a year]," he said.

Hutchinson said that "we have sufficient room to address these urgent public safety needs," with his finance team conservatively estimating the $500 million surplus for fiscal 2022.

"And yes if this surplus continues to grow, then there will be an opportunity next year to return part of the growing surplus to the taxpayers," he said.

Afterward, House Democratic leader Tippi McCullough of Little Rock noted that a majority of Democrats were sitting down when Hutchinson received a round of applause for his prison expansion plan.

She said this wasn't a planned thing, but something that just happened.

"The jail issue was one of the times we didn't stand up, and that is something that we are still digesting," McCullough said. "Instead of building new prisons, we need to address all the issues that lead someone to prison in the first place."

McCullough said that when it comes to funding law enforcement, she views public safety as an important priority, but the situation is more complicated than just providing money.

"Law enforcement work is dangerous and difficult situations, and I don't begrudge people getting paid for doing that type of dangerous work that keeps us safe," she said. "But we need to dig deeper to address the whole system."

A Joint Budget Committee chairman, Rep. Lane Jean, R-Magnolia, said the big question is the true cost of the proposed prison expansion and whether it is closer to $60 million or closer to $100 million.

Hutchinson recalled that on an economic development trip to Israel in November, he touted that Arkansas enacted a law in 2019 that allowed the piloting of autonomous vehicles. He added that "we are now using fully automated vehicles delivering goods from the warehouse to the retail store" through the work of the General Assembly, state Department of Transportation, and Walmart and Gatik in the private sector.

The state also has recruited the headquarters of the electric vehicle manufacturing company Canoo, he noted. Standard Lithium in south Arkansas is piloting the production of a critical element in the supply chain for electric vehicles, and the steel that is required for the battery casing in electric vehicles is produced in eastern Arkansas, he said.

"Quite frankly, this needs to be accelerated," he said. "Oklahoma already has it in place, and we may need to devote state dollars to get it done more quickly."

Hutchinson said the Arkansas Council on Future Mobility that he's creating will be tasked with identifying state laws and regulations that create a barrier to the development and enhancement of electrification, autonomous vehicles, drone delivery and advanced air mobility, will examine workforce training and access to federal funding, and will make recommendations to the 2023 General Assembly.

"In the future, you will have choices to make," he said. "I encourage you to build on the private sector success we have in this state and allow innovation and new technologies to bolster our future."

House Republican leader Austin McCollum of Bentonville said Hutchinson's speech is the best one he has given on the House floor.

"You heard the standing ovations on tax cuts and the surplus," he said.

McCollum said he also heard a lot of excitement around the autonomous and electric vehicle challenge.

"I am a big fan of the state being an innovator in this regard," he said.

McCollum said the biggest thing the state can do besides funding electric stations is deregulating restrictions on autonomous and electric vehicles.

Hutchinson has been governor since 2015 and is barred from seeking reelection this year under the state's term-limits amendment. He is a former U.S. Department of Homeland Security undersecretary, U.S. Drug Enforcement Administration administrator, 3rd District congressman, and U.S. attorney.

At the outset of his remarks, Hutchinson said that "the opportunity to serve and lead the state that I love has been the privilege of my public career."

The governor said he is grateful for his partnership with the General Assembly.

"Every once in a while we may disagree ... but all in all we have worked together and accomplished a great deal for the people that we serve," Hutchinson said. "Our work together has not been for the faint of heart, but it has been transformative and will impact generations to come."

He said he wanted to be "the jobs governor" before his initial election in 2014, adding that through the work of Department of Commerce Secretary Mike Preston and the Arkansas Economic Development Commission and "our many partners, we've had historic success."

The state has signed 556 incentive agreements that created 25,000 jobs, and 81,000 more people are employed now than when he took office in 2015, Hutchinson said.

The governor said U.S. Steel broke ground last week on a new $3 billion steel mill in Osceola, which is expected to create more than 900 high-paying jobs and is the largest economic development project in the state's history. The project would not have been possible without the support of the Legislature in passing economic development incentives in the Dec. 7-9 special session to win the project, he said.

Hutchinson said the cumulative total of the state's income tax reductions over the past seven years of his administration exceeds $1 billion and that "we did this while giving teachers raises, increasing funding for education, and creating a record $1.2 billion in reserve funds."

In addition, he said, "we saw the need for improved roads and highways, so we met the challenge by doing the heavy lifting of passing the largest highway funding plan in history."

CORRECTION: Gov. Asa Hutchinson on Monday called for the Arkansas General Assembly to authorize using state surplus funds to make a one-time payment to each city and county certified law enforcement officer. The headline on an earlier version of this story incorrectly described the nature of the payment.