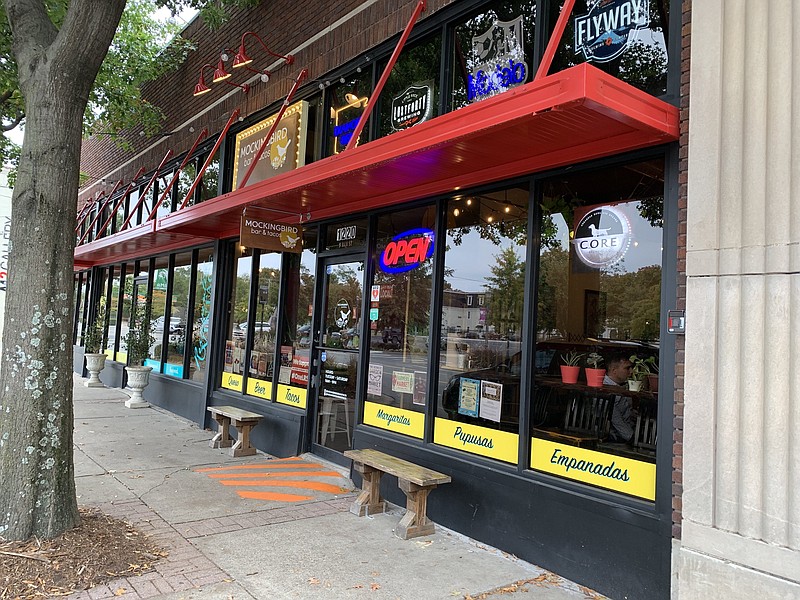 Homer’s West co-owner David Connell says continuing construction delays have pushed the target opening of what is to become Homer’s Kitchen Table to “sometime in April.” The restaurant is moving from the Galleria Shopping Center, 9700 N. Rodney Parham Road, Little Rock, to part of the defunct Franke’s Cafeteria in the Market Place Shopping Center, 11121 N. Rodney Parham, and Connell has had to postpone the opening at least twice.

To recap: Homer’s is taking over the portion of the building at the end cap of half a shopping center, that faces Rodney Parham. (The part facing Market Street, will be a fitness center, to be called Breakout Bar.) A bigger kitchen will allow an “evolution” of the menu, while keeping the staples that make Homer’s Homer’s, and to add more homemade desserts and pies and more elaborate dinner specials. It will also have a designated area for takeout orders. (501) 224-6637; homersrestaurant.com; facebook.com/HomersWest.

The Little Rock Board of Directors on Tuesday passed an ordinance to let SOMA Storefronts, LLC, erect a deck, railing and gate for outdoor dining “and for other purposes” on the sidewalk directly in front of Mockingbird Bar & Tacos, 1220 Main St.

Meanwhile, Mockingbird’s neighbor, Esters, 1214 Main, is closing — last day will be Feb. 26, coinciding with SoMA’s Mardi Gras festivities, “and it’s in that spirit that we’re going to go out with a bang,” according to a Tuesday post on the restaurant’s Facebook page (facebook.com/Esters.SOMA). “We’ll have live music and hope to make it a party. … Thanks again for allowing [us] this opportunity to fill your life with crazy ideas for (mostly) plant-based food.” Meanwhile, Esters is offering discounts on its alcoholic beverages. (501) 353-2489; Esterspub.com.

And speaking of city permits, a building permit application has been filed “to extend drive-thru services side of building” at Shotgun Dan’s, 10923 W. Markham St., Little Rock.

Meanwhile, the latest list of applications, approved, pending and denied, for state Health Department plumbing permits reveals that Back Home BBQ might be going into 1706 W. Third St., Little Rock, that most recently housed The Capital’s Seafood House, and was the longtime home of O.W. Pizza. No details are available, and, given some hurdles that need to be overtopped, we’re told, the project is still tentative. We’ve reported several times on spotting activity in and around the building.

Details are also sketchy at best, but we found these other pending places on that list:

◼️ The restaurant going into the former Cafe Prego, 5510 Kavanaugh Blvd., Little Rock, is to be called George’s. A zoning change made it possible to renovate and expand the building to create “a classic Italian restaurant,” according to a city Planning Department official.

◼️ A Chipotle Mexican Grill at 3929 McCain Blvd, North Little Rock, apparently, according to our map, possibly next door to the LongHorn Steak House.

◼️ A Little Rock outlet of Logan, Utah-based gourmet cookie chain Crumbl Cookies, in the Pleasant Ridge Town Center, 11525 Cantrell Road, Little Rock, in what apparently had been a high-end clothing store. We reported a couple of months ago that the chain, which opened an outlet in Bentonville last year, also reportedly has one on the blocks for Benton’s Hurricane Creek Village center, 20770 Interstate 30 North.

◼️ A second Lea Lea’s Gourmet Dogs at 3400 S. University Ave., Little Rock. (The first is at 215 Center St. downtown.) Owner Cherreyl Alexander says the new place, for which she does not yet have a timeline, is going into a former hookah bar in the strip center a bit off the main drag.

◼️ The Coffee Corner, set to open by the end of February in a former laundromat in the strip center at 9823 Maumelle Blvd., North Little Rock. (It’s possible somebody may have spotted this as a place called The French Crepes, but that’s no longer its name.) The menu will consist almost entirely of coffee, coffee drinks and croissants. Hours will be 7 a.m.-5 p.m. daily. We don’t yet have a listed phone number.

◼️ Another outlet of the Slim Chickens chain, going in at 1870 John Hardin Drive, Jacksonville.

Meanwhile, the Hot Springs Post reports that Superior Bathhouse Brewery, 329 Central Ave., Hot Springs, in a partnership with The Blind Cafe Experience, will offer a “dining in the dark” experience in its upstairs dining room, 7 p.m. Feb. 25-26. They’ll cover all the windows, turn out all the lights and attendees, relying on every other sense but sight, will sit at a table with nine strangers, socializing and eating a four-course meal of finger foods paired with Superior beers or nonalcoholic beverages. During the event, there will be a question-and-answer session with the Blind Cafe’s legally blind ambassadors. In the background: music by Rosh The Blind Cafe Orchestra. The Blind Cafe has hosted events in Seattle; Boulder, Colo., and Austin, Texas; this will be its first in Arkansas.

The four-course, hands-on experience will have an “Asian flare” with “a bunch of crazy elements,” says Superior’s general manager, Katie Windham. Tickets are $65; visit eventbrite.com/e/the-blind-cafe-experience-tickets-225480737957. (Disclose food allergies and beverage preferences when you place your ticket order. ) The event will have a capacity of 70, and CDC covid-19 guidelines will be implemented. Vaccinations are encouraged.

The event, we’re told, will not affect the operation of Superior’s downstairs restaurant.