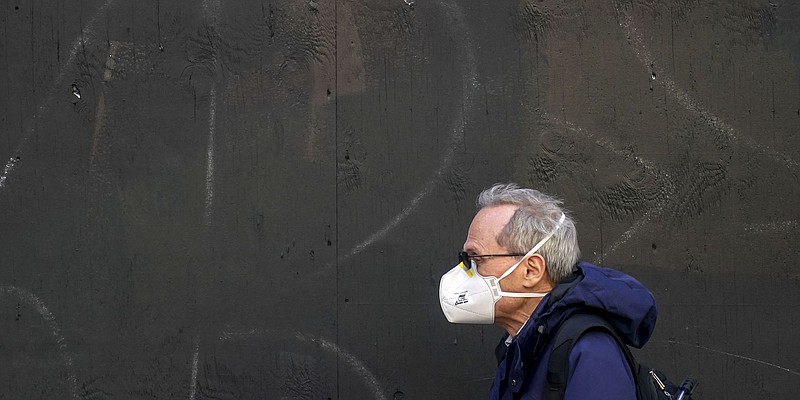 A man observes coronavirus precautions Wednesday while walking in Philadelphia. Dr. Rochelle Walensky, director of the national Centers for Disease Control and Prevention, says the government is contemplating a change in its mask guidance in light of declining case numbers. (AP/Matt Rourke)

The nation's leading health officials said Wednesday that the U.S. is moving closer to the point that covid-19 is no longer a "constant crisis" as more cities, businesses and sports venues begin lifting pandemic restrictions around the country.

Centers for Disease Control and Prevention Director Dr. Rochelle Walensky said during a White House briefing that the government is contemplating a change in its mask guidance in the coming weeks. Noting recent declines in covid-19 cases, hospital admissions and deaths, she acknowledged that "people are so eager" for health officials to ease masking rules and other measures designed to stop the spread of the coronavirus.

"We all share the same goal -- to get to a point where covid-19 is no longer disrupting our daily lives, a time when it won't be a constant crisis -- rather something we can prevent, protect against, and treat," Walensky said.

With the omicron variant's presence waning and Americans eager to move beyond the virus, government and business leaders have moved ahead of the CDC in ending virus measures in the past week, including ordering workers back to offices, eliminating mask mandates and no longer requiring proof of vaccinations to enter restaurants, bars, and sports and entertainment arenas.

At Disney World, vaccinated guests will no longer have to wear masks at the Florida theme park starting today.

Professional sports teams -- including the Utah Jazz and Washington Wizards and Capitals -- have stopped requiring proof of vaccinations for fans.

The most populous county in Washington announced Wednesday that it will no longer require covid-19 vaccination checks to enter restaurants, bars, theaters and gyms beginning March 1.

Health Commissioner Cheryl Bettigole said Philadelphia's average daily count had dropped to 189 cases per day in the city of more than 1.5 million people. Bettigole said the plunge in infections has been steeper in Philadelphia than elsewhere in the state or the country, making it easier to lift the vaccination mandate for restaurants and other businesses.

"Our goal has always been to the least restrictive as possible while ensuring safety," she said.

Covid-19 infections and hospitalizations have fallen sharply in the U.S., with the seven-day rolling average for daily new cases dropping from about 453,000 two weeks ago to about 136,000 as of Tuesday, according to data from Johns Hopkins University. Hospitalizations are at levels similar to September, when the U.S. was emerging from the delta variant surge. Almost 65% of Americans are fully vaccinated.

"As a result of all this progress and the tools we now have, we are moving to a time where covid isn't a crisis but is something we can protect against and treat," said Jeff Zients, the White House coronavirus response coordinator.

Walensky said the CDC "will soon put guidance in place that is relevant and encourages prevention measures when they are most needed to protect public health and our hospitals." She suggested any changes will take into account measures of community transmission, as well as hospitalization rates or other gauges of whether infected people are becoming severely ill.

Officials with two music festivals that draw thousands of people to the California desert town of Indio in April and May, Coachella and Stagecoach, also said this week that there will be no vaccination, masking or testing mandates for the events in accordance with local guidelines. Coachella officials noted that could change along with covid-19 conditions.

In Philadelphia, Bettigole said the vaccine mandate helped spur "a very large" increase in pediatric vaccinations, pushing the city way ahead of the national average for first doses among kids ages 5-11. More than 53% of Philadelphia residents in that age group have received a first dose, compared with closer to 30% nationally, she said.

Walensky also said there will be instances where people should continue to wear masks even if prevention measures ease. Examples include when individuals have symptoms of covid-19 or are within 10 days after being diagnosed with it.

In other new developments, a federal judge Tuesday ordered the Air Force to let an officer stay unvaccinated against the coronavirus temporarily, without penalties, making her the first in the branch to receive a court injunction that excuses her from a military-wide vaccination mandate.

Tuesday's preliminary injunction shields the officer from forced retirement for refusing a coronavirus vaccination until a final ruling is made. She objects to the vaccines "because of their connection to abortion," according to her attorneys. Cell lines used in the production of vaccines approved by the Food and Drug Administration are reproductions of fetal cells from abortions done in the 1970s and 1980s. The shots themselves don't contain fetal cells.

She "is compliant with masking, social distancing, and other practices, and, most importantly, has deeply held religious convictions against the vaccine. She sincerely believes that receiving one of the currently available covid-19 vaccines would violate her conscience and would be contrary to her faith," the Thomas More Society said.

The Pentagon and Air Force last year rejected her request for religious exemption, citing the military's compelling interest in "maintaining the health and readiness" of its troops. The officer sued in January.

Judge Tilman E. Self of the U.S. District Court in Macon, Ga., sided with the officer.

"All Americans, especially the Court, want our country to maintain a military force that is powerful enough to thoroughly destroy any enemy who dares to challenge it," Self said in the ruling. "However, we also want a military force strong enough to respect and protect its service members' constitutional and statutory religious rights."

While restrictions lift, the Biden administration is telling Congress that it needs an additional $30 billion to press ahead with the fight against covid-19, officials said.

Two people familiar with the administration's plan confirmed key details Tuesday: $17.9 billion for vaccines and treatments, $4.9 billion for testing, $3 billion to cover coronavirus care for uninsured people, and $3.7 billion to prepare for future variants. They spoke on condition of anonymity to discuss deliberations between the administration and lawmakers over the supplemental funding.

Separately, Republican Sen. Roy Blunt of Missouri told reporters that he'd spoken with Health and Human Services Secretary Xavier Becerra, and "I think they are going to be proposing a $30 billion supplemental."

"While we continue to have sufficient funds to respond to the current omicron surge in the coming weeks, our goal has always been to ensure that we are well-prepared to stay ahead of the virus," said White House press secretary Jen Psaki.

According to the nonpartisan Committee for a Responsible Federal Budget, Congress has already approved $5.8 trillion to battle the pandemic in a series of major bills spanning the Trump and Biden administrations.

Psaki said most of the money from President Joe Biden's 2021 coronavirus relief bill has been spent or allocated, with 90% going for such priorities as vaccines, testing and support for schools.

Information for this article was contributed by Mike Stobbe, Tali Arbel, Claudia Lauer, Todd Richmond, Zeke Miller, Ricardo Alonso-Zaldivar and Sara Burnett of The Associated Press; and by Andrew Jeong of The Washington Post. 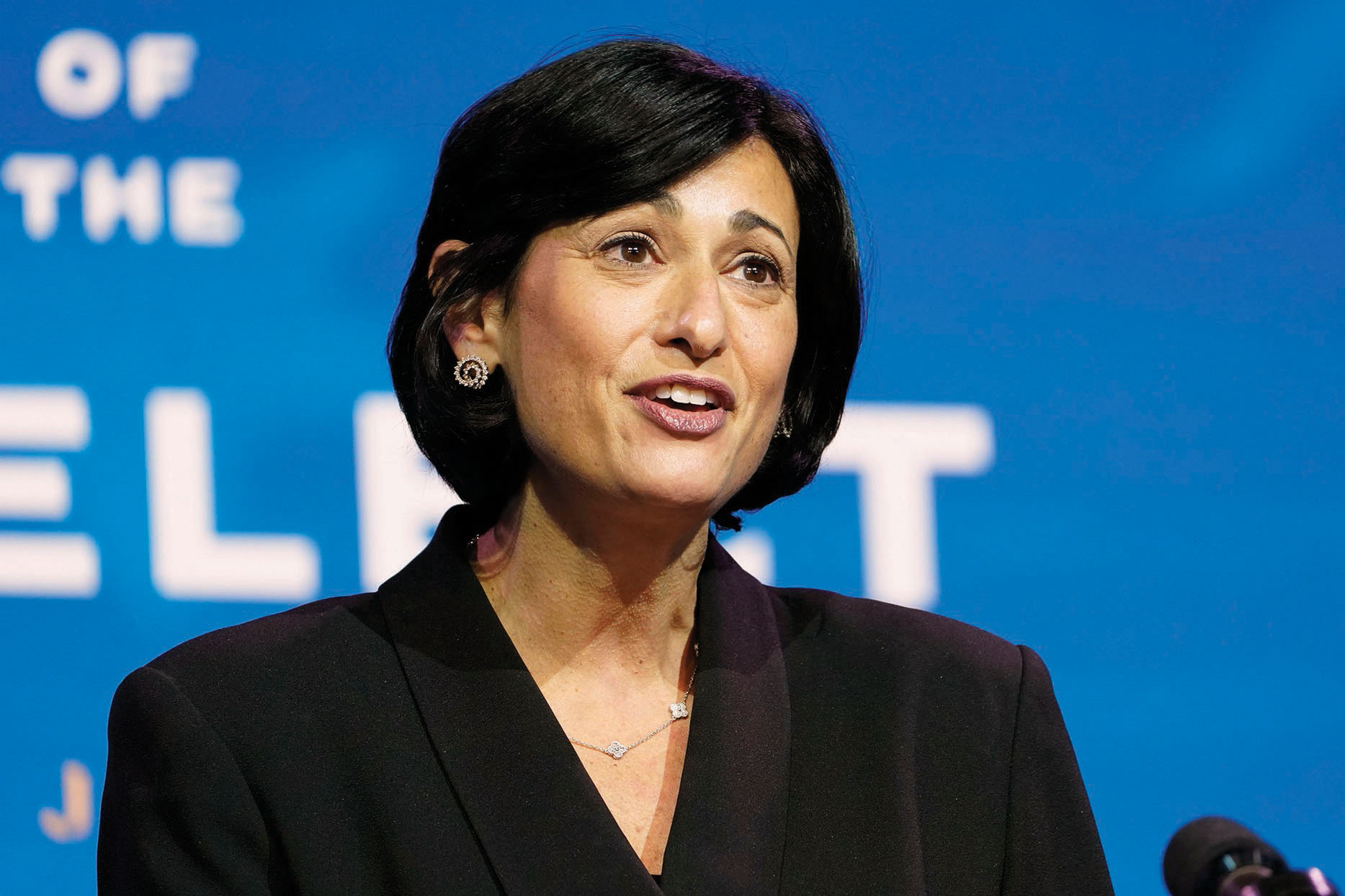 FILE - Dr. Rochelle Walensky, director of the Centers for Disease Control and Prevention, speaks during an event on Dec. 8, 2020, in Wilmington, Del. (AP Photo/Susan Walsh, File)