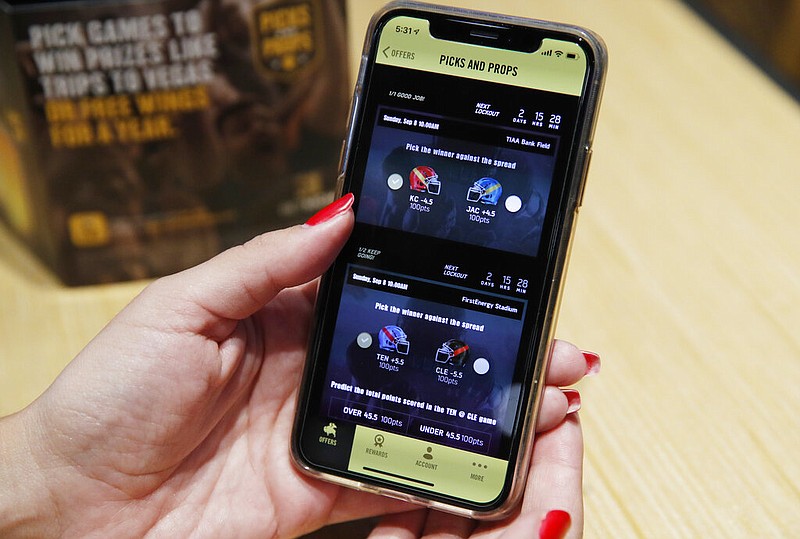 The Arkansas Racing Commission's proposed rule that would allow the state's casinos to begin accepting mobile sports bets from throughout Arkansas cleared a legislative panel Thursday.

If the Joint Budget Committee approves the proposed rule, it would become effective 10 days after the committee's approval and the state's casinos would have the opportunity to launch apps by the end of the first week of March, Department of Finance and Administration spokesman Scott Hardin said afterward.

"March Madness, which has been raised several times in the review discussion, formally begins March 13 [when the teams selected are announced]," Hardin said in a written statement.

The NCAA men's basketball tournament starts with the first four games on March 15-16 in Dayton, Ohio, according to the NCAA website.

Asked when is the earliest that Saracen Casino Resort would be ready to begin accepting mobile sports bets in Arkansas, Carlton Saffa, Saracen's chief market officer, said in a text message to the Arkansas Democrat-Gazette, "In short, we will be live for March Madness if not sooner.

"But many of the pre-launch functions require demonstrable legality in your jurisdiction before the compliance divisions of the companies necessary to deploy the product will give their OK," he said.

Southland Casino Racing spokeswoman Natalie Carlson said Thursday in a written statement: "We are looking forward to offering mobile sports wagering in Arkansas and will have an announcement on that at the appropriate time."

Oaklawn Racing Casino Resort spokesman Ryan Hilton said Thursday in an interview that the casino will have an announcement at the time it's prepared to begin offering mobile sports betting.

Amendment 100 to the Arkansas Constitution, approved by voters in November 2018, authorizes the casinos to offer sports betting. Mobile sports betting is currently allowed in Louisiana and Tennessee among Arkansas' surrounding states, Hardin said.

The proposed Racing Commission rule would define an online sports pool as an operation in which wagers on sports events are made over the internet on websites or mobile applications through computers, mobile devices or other approved interactive devices accepted through a gaming system approved by the commission.

The proposed rule would grant the state's casinos more than half of the mobile sports betting proceeds when partnering with online bookmakers. The majority split would set Arkansas apart from the rest of the nation, where the average share is 5%-15% with local casinos.

The proposed rule is backed by officials representing the state's three operating casinos.

Lobbyist John Burris, who represents Draft Kings Inc., FanDuel Inc. BetMGM, Fanatics and Bally's, told lawmakers on Wednesday that the proposed rule is inconsistent with the federal commerce clause because the state can't discriminate against an out-of-state company for the benefit of an in-state company.

But officials of the state's three operating casinos said Wednesday that the proposed rule is consistent with state and federal law and doesn't discriminate against companies based on where they are located. That prompted state Rep. Denise Garner, D-Fayetteville, to question whether Attorney General Leslie Rutledge's office believes the proposed rule would violate the interstate commerce clause.

Brian Bowen, chief of staff for the attorney general, told lawmakers on Thursday that "there was several comments yesterday made on the legality of the rule and opinions as to whether or not it violated the dormant commerce clause, our position is if challenged we can defend this rule."

The dormant commerce clause refers to the prohibition -- implicit in the Commerce Clause in Article 1, Section 8, Clause 3 of the U.S. Constitution -- against states passing legislation that discriminates against or excessively burdens interstate commerce, according to the Cornell Law School website.

Bowen said "I must apologize because in anticipation of litigation I don't want to lay a road map out for any defense that our office might have.

"After our review of the rule, we do feel like we can defend the rule if challenged."

Dotson said he doesn't necessarily agree that requiring the state's casinos get more than half of the mobile sports betting proceeds when partnering with an online sports book is good public policy.

"Obviously this is about the money."

In response to a question from Rep. Les Eaves, R-Searcy, Saffa said it's important for the commission's proposed rule to require the state's casinos to retain more than half of the proceeds from mobile sports bettings when partnering with an online sports book as a matter of public policy.

"If we did business with the out-of-state vendor, please understand, representative, what that largely means is we turn over that book to the vendor. Our name may be associated with it. But what I am essentially saying is here is my license, go book business under it, and send me some money and ... 5%," he said.

Saffa said he doesn't believe that is good public policy because the national vendors don't have buildings and employees in the state.

"I just can't see why you need us or the Racing Commission rule to prevent you from entering into a contract with a third-party vendor," Eaves said. "It's your choice."

Saffa said that "the Commerce Clause has only been introduced into this room because the national vendors need a Hail Mary pass to stop the rule" that comports with state and federal law.

"They must produce something for you today to stop this, and thus we are hanging our hat on one of the most obscure and complex components of constitutional law."

Asked afterward whether his clients are considering a lawsuit challenging the proposed Racing Commission rule, Burris said "The rule was absolutely written with the intent to discriminate toward out-of-state vendors and favor in-state vendors.

"As a result, consumers will not have a competitive marketplace," he said in a text message to Arkansas Democrat-Gazette. "There are many factors to assess with litigation, including market size and time investment. The Legislature will convene in a regular session in eleven months. No specific course of action has been decided."

About $33 million was legally wagered on sports across the state's three casinos in 2020, and that total increased to $67.7 million in 2021, according to Hardin. Oaklawn accepted the state's first legal sports wager in July 2019.