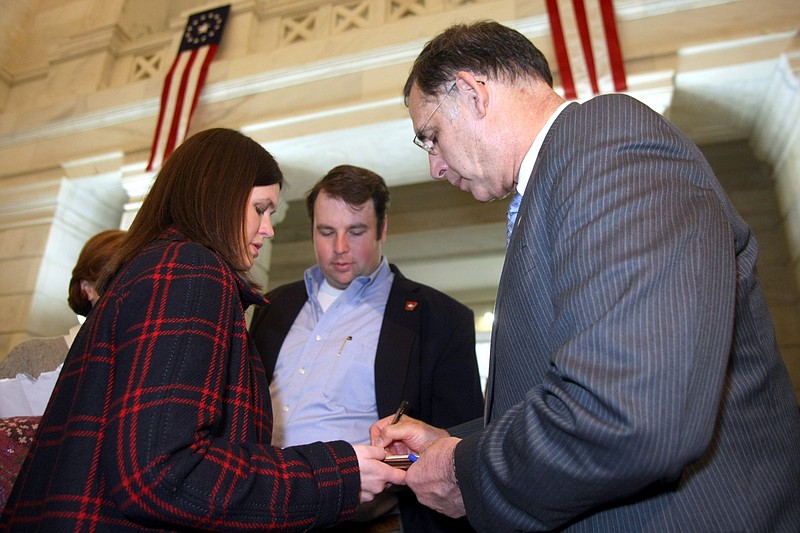 Sarah Huckabee (left), campaign manager for then-U.S. Rep. John Boozman, R-Ark., holds paperwork for Boozman as he files to run for the U.S. Senate in the Capitol Rotunda in Little Rock in this photo taken on March 1, 2010, the first day to file for state and federal offices for the 2010 elections. Chris Caldwell, political director for Boozman for Arkansas, is seen at center. Twelve years later, Boozman is seeking a third term in the U.S. Senate; the now-married Sarah Huckabee Sanders is running for Arkansas governor; and Caldwell is the former chairman of the Delta Regional Authority and Sanders' campaign director. (Arkansas Democrat-Gazette file photo)

Political campaigns in Arkansas may have been underway for months, but come Tuesday it will be time for candidates to start making things official.

Nearly 200 state and federal offices are up for election in Arkansas this year. That includes all 135 seats in the Arkansas Legislature because of the state undergoing its decennial redistricting process, plus all four U.S. House seats, one U.S. Senate seat, all seven constitutional offices and 52 judicial positions.

Filing for partisan offices begins at noon Tuesday, and filing for nonpartisan judicial offices starts at 3 p.m. The filing period ends March 1 at the same times.

Filing for state and federal offices will take place on the second floor of the Capitol rotunda.

Republicans, who hold all of the state's federal and constitutional offices, as well as a supermajority in the state Legislature, anticipate holding onto those seats and potentially picking up more.

"Our expectations are to win," Republican Party of Arkansas Chairwoman Jonelle Fulmer said in an interview Friday.

Meanwhile, the Democrats likely won't have a candidate for every office but plan to target areas that have gained population in diversity with precincts that voted for President Joe Biden in 2020, Democratic Party of Arkansas strategic director Will Watson said.

"The data shows us that we can win quite a few seats outside of Northwest Arkansas and Little Rock proper," he said.

Because of all 135 of the state's House and Senate districts being redrawn based on data from the 2020 U.S. Census during the redistricting process, new seats were created in Central Arkansas and Northwest Arkansas while other parts of the state lost seats because of population decline.

"We do have some new seats with the redistricting," Fulmer said. "We had to lose a couple of seats in some areas and gain some in other areas, so we really look forward to opportunities potentially to grow and flip seats."

Fulmer declined to say which seats the party would target but said Republicans will concentrate on Central Arkansas and Northwest Arkansas.

Watson said the new districts, which were drawn by the GOP-controlled Board of Apportionment, aimed to minimize Democratic power in the state and that Black legislators face an "uphill climb" to maintain their seats because of the new maps.

The state's redistricting plan is at issue in a federal lawsuit alleging that it violates the 1965 Voting Rights Act by diluting the influence of Black voters. U.S. District Court Judge Lee Rudofsky on Thursday issued an order dismissing the case unless the U.S. Department of Justice joins as a plaintiff.

"But there are just simply some areas of the state that are growing so rapidly that Democrats will be competitive no matter how they drew the lines," Watson said. "I think we're going to fight very hard until Election Day to protect all of our incumbents, and I think our incumbents have a record of fighting for families in their districts that will speak for themselves."

Fulmer said national issues that affect Arkansas will likely be a part of Republican candidates' campaigns and that many candidates have chosen to run for office in response to Biden's presidency.

"We do think that the extreme policies of the Democrats are the impetus behind a lot of Republicans wanting to get involved," she said. "They see the socialist policies that the Democrats are offering and pushing, and they want to fight back and step up for our country and restore it to the traditional values."

She added that education, better-paying jobs, fiscal responsibility, opposing abortion and defending law enforcement also will be at the forefront.

Fulmer said the high number of likely primary challenges shows that Republicans are the party that represents Arkansas.

"I think it says that we are a strong party, that we can support primaries, and we think that primaries are good because the people get to select the nominee that best reflects their policies, their principles," she said.

Watson said Democrats are focused on "issues that will improve the lives of Arkansans" and that the recent budget priorities of Republicans are at odds with what Arkansas needs, including infrastructure improvements, broadband and better teacher pay.

He said that as the state has changed over the past decade, Democrats have struggled to recruit candidates in areas that voted heavily for former President Donald Trump where they don't see a pathway to getting elected, though he said he is encouraged that there are people across the state who don't care about those margins and are interested in serving their communities.

Neither party endorses candidates before the primary, which is set for May 24. The nonpartisan judicial elections take place the same day, and the general election is Nov. 8.

As a "new political party" that gained ballot access by petition, the Libertarian Party selected nominees over the weekend before the filing period begins Tuesday.