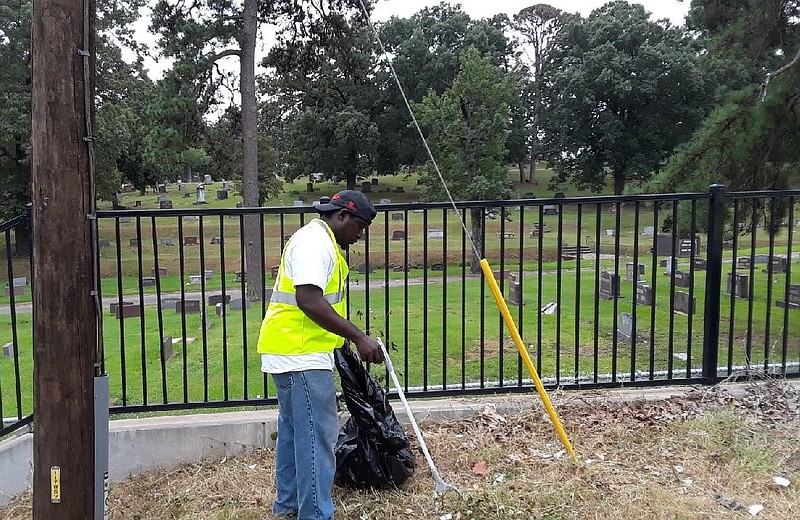 Mario Sexton, a participant in the Little Rock-sponsored program A Bridge to Work, picks up trash on Wright Avenue in this summer 2019 file photo. (Arkansas Democrat-Gazette file photo)

Little Rock is reviving a program that pays homeless individuals hourly wages for day labor after the city board of directors approved a $150,000 contract last week.

The partnership with Canvas Community Church will pay participants $11 per hour for picking up trash or other beautification tasks over four hours per day, three days a week, throughout the city.

Known as "A Bridge to Work," the program helped 651 people during a six-month pilot period in 2019, Canvas associate pastor Paul Atkins said Wednesday. The minimum hourly wage was $9.25 at the time.

Moore said the program was shelved for two years because of the covid-19 pandemic. He announced in November that the city would restart A Bridge to Work in 2022.

The program is planned to restart in March.

"It was received very positively not only from the city but from the community," City Manager Bruce Moore said Wednesday. "We were just looking for the right time to get it revamped and restarted."

A Bridge to Work inspired a similar program in Hot Springs called Hope Works, and Fayetteville officials hope to establish one, as well.

The project was modeled after an Albuquerque, N.M., program that began in 2015, called "There's a Better Way." Various cities, including Tulsa and Fort Worth, have implemented versions of the program.

Little Rock Ward 3 Director Kathy Webb said a constituent had connections to Albuquerque and told her about the program in 2018. Webb, Moore and other city leaders met with the Albuquerque official in charge of There's a Better Way to adapt it and introduce it in Little Rock.

Webb said A Bridge to Work has been successful for three reasons.

"One, people in the homeless community got employment," she said. "Two, people in the city saw that the streets and the areas around the freeways were cleaner. They could see that litter was being picked up in a big way. Three, people in the program not only had the dignity of work, but during their lunch break, we had mentors and the person who ran the program at Canvas there to talk about what other opportunities there were ... whether it be housing or counseling services or someone who can help you get an ID, something that basic."

Atkins said many of the 651 participants in 2019 benefited in a variety of ways:

• 14 addressed a variety of legal issues.

• 20 reconnected with their families.

The workers cleaned 284 sites across all seven wards of the city, and they worked a total of 4,149 hours, removing 3,681 bags of trash from the streets, Atkins said.

The program welcomes panhandlers and invited 280 in 2019, he said, with 81 agreeing to participate.

A "full crew" of workers per day was capped at eight, and if not enough people showed up outside Canvas on Seventh Street, Atkins said he would call the homeless resource center Jericho Way and see if anyone there was interested in cleaning up the city. If there were still slots available, the group would reach out to panhandlers.

James Hammond-Evans became Jericho Way director at the beginning of 2022. He said he has met with Atkins about how Jericho Way and A Bridge to Work can continue to collaborate to help people experiencing homelessness.

"When they sign up for case management, we do a brief assessment to determine what that person's needs are to be able to achieve their goals," Hammond-Evans said. "The goal is permanent housing, but a lot of times [it's] also the income that has to come with it."

The city and Canvas set a maximum cost of $80,000 for the six-month pilot program in 2019. Atkins said they were "always under-budget" and the $150,000 contract for a full year should be enough, even with the added costs of masks and rapid covid-19 tests to keep participants safe from the coronavirus.

Atkins said the number of workers per day will shrink from eight to five "so we can space out inside the van and not have people sitting on top of each other in a small confined space."

The target start date for A Bridge to Work is March 1, Atkins said, but Canvas must fill a few job openings for the program first.

The contract with the church will allow the program to be extended for three years, via three individual one-year extensions.

Atkins said he is open to expanding the program, although it would require more funding to hire more social services staffers, and obtain a second van and driver.

"The program is as much about inviting our participants into a life-change process as it is about earning a wage by cleaning up the city," Atkins said.

Officials in Hot Springs took a cue from Little Rock and started Hope Works in 2019, shortly after A Bridge to Work began.

"We brought all our nonprofits together and said, 'Everyone's doing great things, and everyone has their own forte, but it's like everyone's throwing small pebbles into a pond and making some ripples,'" City Manager Bill Burrough said. "If we join forces and throw a rock into the pond, we're going to make a wave."

Hope Works did not stop or slow down because of the pandemic. The city "took all the necessary precautions, and there may not have been as many people involved, but we never stopped it," said Karen Garcia, who represents District 5 on the Hot Springs Board of Directors and was involved in creation of Hope Works.

The city is working on creating a community resource center that Burrough called a "one-stop shop" for people experiencing homelessness to access the resources that Hope Works provides, ranging from identification documents to employment and housing opportunities.

"That's one thing we've learned from this process," Garcia said. "There are resources, but they're all spread out in different locations, and if you don't have transportation, that can be a barrier to getting everything timely."

Offices that provide those services in Fayetteville are in the same part of town, community resource director Yolanda Fields said, but the city is "in the preliminary stages" of creating its own version of A Bridge to Work and Hope Works.

City officials are looking for a community organization to partner with, Fields said, and she expects the City Council to support the program.

She said it's important for people who have been homeless to feel like they belong in Fayetteville, in addition to their financial gains, and the beautification of the city's parks and trails.

"It just comes back to being a community where all are welcome and all can enjoy the beauty that we have here, so we're excited," Fields said.

Little Rock's Webb said A Bridge to Work is "a piece of the solution" to homelessness even though it does not eliminate the problem. She also said she appreciates that other cities have followed Little Rock's example.

Fayetteville City Council member Teresa Turk said a "multilayered" program like A Bridge to Work and Hope Works would be effective once officials have tailored it to meet local needs.

"This is a huge toolbox that we need to help people with all kinds of problems, and I don't think it's a panacea. But if we can help people get to a better place in a way that works for them, it's worthwhile that we can explore that," Turk said.