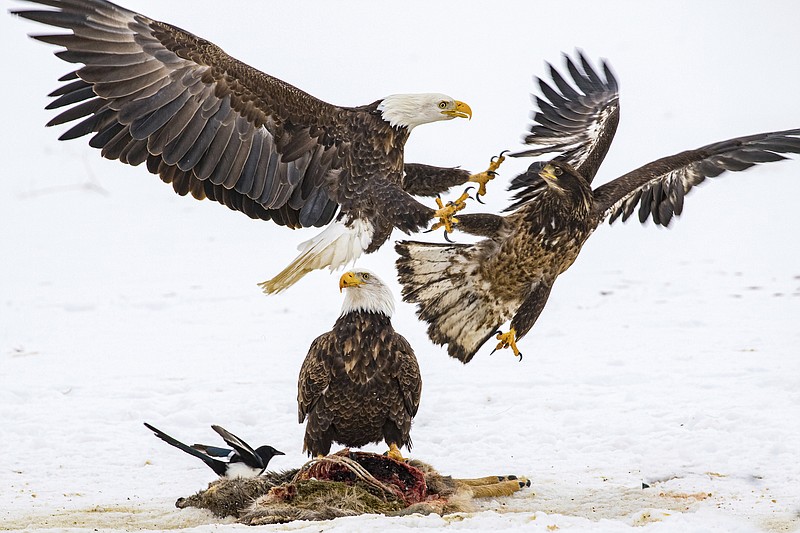 In this photo provided by Estelle Shuttleworth in February 2022, bald eagles compete for a deer carcass in Montana. While the bald eagle population has rebounded from the brink of extinction since the U.S. banned the pesticide DDT was banned in the U.S. in 1972, harmful levels of toxic lead were found in the bones of 46% of bald eagles sampled in 38 states, from California to Florida, researchers reported in the journal Science on Thursday, Feb. 17, 2022. (Estelle Shuttleworth via AP)

WASHINGTON -- America's national bird is more beleaguered than previously believed, with nearly half of bald eagles tested across the U.S. showing signs of chronic lead exposure, according to a study published Thursday.

While the bald eagle population has rebounded from the brink of extinction since the United States banned the pesticide DDT in 1972, harmful levels of toxic lead were found in the bones of 46% of bald eagles sampled in 38 states from California to Florida, researchers reported in the journal Science.

Similar rates of lead exposure were found in golden eagles, which scientists say means the raptors likely consumed carrion or prey contaminated by lead from ammunition or fishing tackle.

The blood, bones, feathers and liver tissue of 1,210 eagles sampled from 2010 to 2018 were examined to assess chronic and acute lead exposure.

"This is the first time for any wildlife species that we've been able to evaluate lead exposure and population level consequences at a continental scale," said study co-author Todd Katzner, a wildlife biologist at U.S. Geological Survey in Boise, Idaho.

Lead is a neurotoxin that even in low doses impairs an eagle's balance and stamina, reducing its ability to fly, hunt and reproduce. In high doses, lead causes seizures, breathing difficulty and death.

The study estimated that lead exposure reduced the annual population growth of bald eagles by 4% and golden eagles by 1%.

Bald eagles are one of America's most celebrated conservation success stories, and the birds were removed from the U.S. Endangered Species List in 2007.

But scientists say that high lead levels are still a concern. Besides suppressing eagle population growth, lead exposure reduces their resilience in facing future challenges, such as climate change or infectious diseases.

"When we talk about recovery, it's not really the end of the story -- there are still threats to bald eagles," said Krysten Schuler, a wildlife disease ecologist at Cornell University's College of Veterinary Medicine, who was not involved in the study.

Previous studies have shown high lead exposure in specific regions, but not across the country. The blood samples from live eagles in the new study were taken from birds trapped and studied for other reasons; the bone, feather and liver samples came from eagles killed by collisions with vehicles or powerlines, or other misfortunes.

"Lead is present on the landscape and available to these birds more than we previously thought," said co-author Vince Slabe, a research wildlife biologist at the nonprofit Conservation Science Global. "A lead fragment the size of the end of a pin is large enough to cause mortality in an eagle. "

The researchers also found elevated levels of lead exposure in fall and winter, coinciding with hunting season in many states.

During these months, eagles scavenge on carcasses and gut piles left by hunters, which are often riddled with shards of lead shot or bullet fragments.

Slabe said the upshot of the research was not to disparage hunters. "Hunters are one of the best conservation groups in this country," he said, noting that fees and taxes paid by hunters help fund state wildlife agencies, and that he also hunted deer and elk in Montana.

However, Slabe said he hopes the findings provide an opportunity to "talk to hunters about this issue in a clear manner" and that more hunters will voluntarily switch to non-lead ammunition such as copper bullets.

Lead ammunition for waterfowl hunting was banned in 1991, because of concerns about contamination of waterways, and wildlife authorities encouraged the use of nontoxic steel shot. However, lead ammunition is still common for upland bird hunting and big game hunting.

The amount of lead exposure varies regionally, with highest levels found in the Central Flyway, the new study found.

At the University of Minnesota's Raptor Center, veterinarian and executive director Victoria Hall said that "85 to 90% of the eagles that come into our hospital have some level of lead in their blood," and X-rays often show fragments of lead bullets in their stomachs. Eagles with relatively low levels can be treated, she said, but those with high exposure can't be saved.

Laura Hale, board president at nonprofit Badger Run Wildlife Rehab in Klamath County, Oregon, said she'll never forget the first eagle she encountered with acute lead poisoning, in 2018. She had answered a resident's call about an eagle that seemed immobile in underbrush and took it to the clinic.

The young bald eagle was wrapped in a blanket, unable to breathe properly, let alone stand or fly.

"There is something hideous when you watch an eagle struggling to breathe because of lead poisoning -- it's really, really harsh," she said, her voice shaking. That eagle went into convulsions and died within 48 hours.

Lead on the landscape affects not only eagles, but also many other birds -- including hawks, vultures, ravens, swans and geese, said Jennifer Cedarleaf, avian director at Alaska Raptor Center, a nonprofit wildlife rescue in Sitka, Alaska.

Because eagles are very sensitive to lead, are so well-studied and attract so much public interest, "bald eagles are like the canary in the coal mine," she said. "They are the species that tells us: We have a bit of problem."