Arkansas' 2022 filing period: What offices are up for election, who's eligible to run 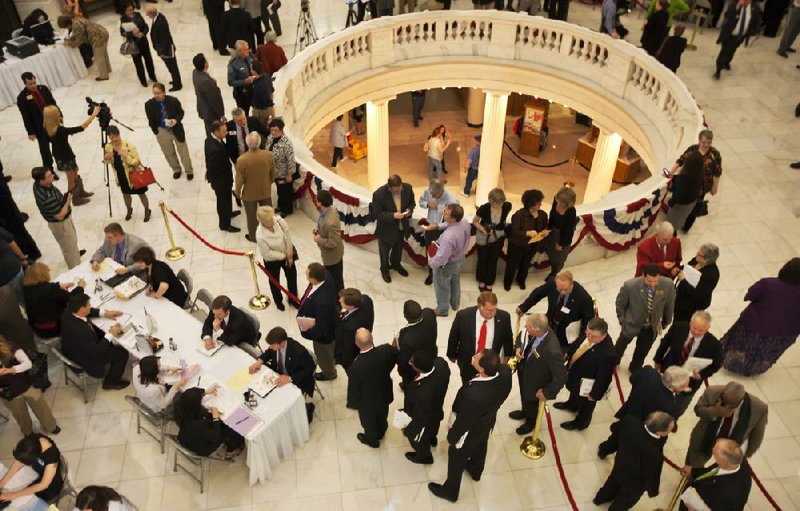 Candidates line up to file to run for political office at the Arkansas state Capitol in Little Rock, Ark., Thursday, Feb. 23, 2012, the first day of the seven-day filing period. (AP Photo/Danny Johnston)

Political campaigns for the 2022 elections may have been underway in Arkansas for months, but candidates don't make things official until the filing period, which begins Feb. 22 and lasts through March 1.

Here are the basics on how it works.

What does it mean to file for office?

In Arkansas and other states, filing for office describes the process prospective candidates must go through to appear on the ballot.

How do candidates file in Arkansas?

For most federal and state offices, candidates must file paperwork with their respective political party and the state, said Kevin Niehaus, spokesman for the Arkansas secretary of state's office.

The secretary of state's office requires candidates to submit candidate information forms that ask for address, phone number, office sought and other basic information as well as a political practices pledge, which they sign to certify that they are eligible to run for office in the state.

[LIST: Who’s filed to run for Arkansas governor, General Assembly and other offices in 2022 » arkansasonline.com/222filinglist/ ]

Candidates have to turn in receipts of filing after they pay party filing fees.

Independent candidates must file a notice of candidacy and an affidavit of eligibility with the secretary of state's office, Niehaus said.

Political officeholders in Arkansas must reside in the state, but other qualifications vary by office.

Candidates for state office must be qualified electors in Arkansas, meaning they are U.S. citizens and Arkansas residents who are at least 18 years old, lawfully registered to vote and not presently judged mentally incompetent. Individuals with felony convictions aren't eligible to run for state office. Officeholders must have never been convicted of fraud, embezzlement of public money, bribery, forgery or other "infamous" crimes, which according to the state Constitution includes any felonies, abuses of office or crimes involving tampering or dishonesty.

To be governor or lieutenant governor, the candidate must have been an Arkansas resident for seven years and at least 30 years old. The other constitutional offices require officeholders to be at least 18.

Judicial candidates must be residents of their chosen district and licensed attorneys in Arkansas for at least eight years immediately preceding the date of assuming office. They must be at least 18.

How much does it cost to file for office?

Filing fees vary by political party and are set by their respective executive committees.

For Republicans, it costs $20,000 to run for U.S. Senate and $15,000 to run for the U.S. House of Representatives or governor, party communications director Julie Williams said. The fee for lieutenant governor or attorney general is $12,500, secretary of state is $10,000 and the remaining constitutional office candidates must pay $7,500. The filing fee for state Senate is $7,500, and the fee for state House is $3,000.

For Democrats, the fees are as follows: $5,000 to run for U.S. Senate, governor or attorney general; $3,000 to run for state Senate; $2,500 to run for U.S. House; and $1,500 to run for lieutenant governor, secretary of state, land commissioner, treasurer, auditor or state House. However, if a candidate is running in a district where there isn't a sitting Democratic legislator and the candidate can get the signature of a county chair or executive committee member in the congressional district, they may be able to file for free, according to Democratic Party of Arkansas political director Jacob Kauffman.

The Libertarian Party of Arkansas, as a "new political party" that gained ballot access by petition, selects nominees at a convention that precedes the party filing process.

The Libertarian Party charges $250 to file for federal office or governor and $100 for any constitutional office or seat in the state Legislature.

Judicial candidates can also file for free by circulating a petition.

What offices are up for election this year?

Because of redistricting, all 135 seats in the Arkansas Legislature are up for reelection this year. So are all seven constitutional offices: governor, lieutenant governor, secretary of state, attorney general, auditor, treasurer and land commissioner.

Arkansas' four seats in the U.S. House of Representatives will also be on the ballot, as will one of the state's U.S. Senate seats.

Additionally, there are 52 judicial positions up for election. Those include three Supreme Court associate justices, four court of appeals associate judges, 16 circuit judges, 28 prosecuting attorneys and one district court judge.