275 candidates file for office in Arkansas on 1st day 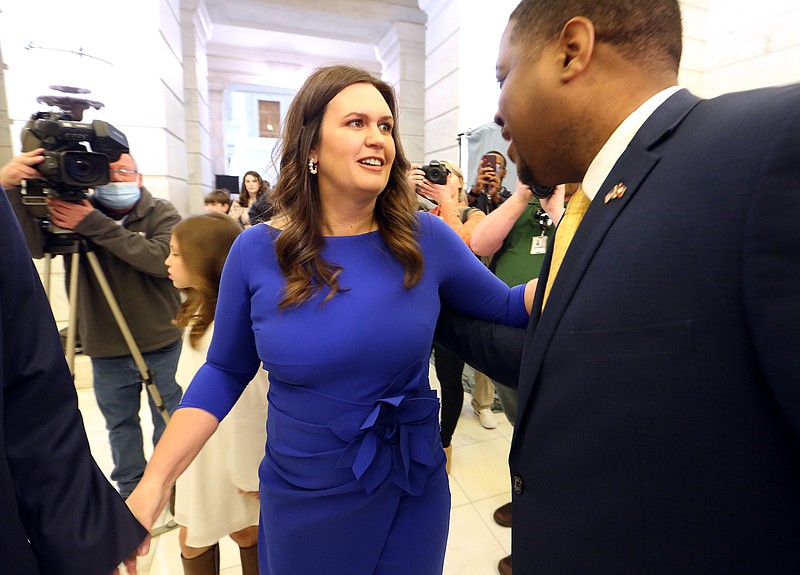 Niehaus said the secretary of state's website won't be updated with all the candidate filings until this morning.

"It was one of the crazier candidate filings I've seen," he said in an email Tuesday evening.

The filing period runs through next Tuesday. Candidates must pay their political party's filing fee and fill out the required paperwork with the secretary of state's office within the six-day filing period to appear on the ballot in this year's elections.

The first-day proceedings, marked by flags decorating the second-floor rotunda at the Capitol and crowds of reporters, politicos and candidates' families, officially kicked off with a countdown from 10 and a bang of a gavel by Secretary of State John Thurston.

"Drivers, start your engines," Thurston quipped from the podium.

[FULL LIST: Who’s filed to run so far for Arkansas governor, General Assembly and other offices in 2022 » arkansasonline.com/222filinglist/ ]

This year brings the first governor's race in Arkansas without an incumbent since 2014, when now-term-limited Republican Gov. Asa Hutchinson was elected. He was reelected in 2018.

Speaking to reporters after she filed, Sanders of Little Rock said she supports reimposing a work requirement for the state's Medicaid expansion program that provides health coverage to more than 300,000 low-income Arkansans and wants to continue working on gradually phasing out the state's income tax if elected governor.

"I think the progress we've made phasing out the income tax is great," she said. "We have to do it responsibly, and we have to do it slowly. It's not going to be an overnight process, but there are a number of things we're going to have to do, starting with cutting the size of government."

She said eliminating state employee positions through attrition, streamlining services and technology savings are ways to do so. She declined to specify a timeline for phasing out the income tax.

On the state's Medicaid expansion, she said "I don't think anybody wants to see people who really need assistance have that taken away."

"Our goal should never be to keep people dependent on the system," she added.

She said she would want to maintain Arkansas' title as the most "pro-life" state in the country but she would let the Legislature make its own decisions on whether to pass an abortion law modeled after the Texas measure that includes a provision allowing a ban on the procedure to be enforced by private citizens through lawsuits. A group of GOP lawmakers has unsuccessfully tried to introduce legislation including that provision during Arkansas' current fiscal session.

Sanders served as a White House press secretary under former President Donald Trump and is the daughter of former Republican Gov. Mike Huckabee.

Jones of Little Rock said there is no need for a Texas-style abortion law in Arkansas.

"We don't want to make our neighbors into vigilantes, so the Legislature did the right thing by tabling it," he said.

"I also believe that it is important for state government to invest in education, in economic development, in adoption, in foster care because these are the things that will ultimately achieve the goal of actually reducing abortions," he said.

The former Arkansas Regional Innovation Hub head said he generally supports the Medicaid expansion program, but has not said if he supports the latest version of it. He said his campaign would put out a policy soon.

Asked if he supports increasing taxes to support his agenda of improving education, infrastructure and job opportunities, Jones said the question of raising taxes "isn't even on the table right now" given the state's surplus.

"The question is what are we going to do with the surplus we have," he said.

Martin is a former state representative from North Little Rock and describes himself as conservative and pro-life.

"Roe v. Wade is the law of the land, but if it is overturned I would certainly sign legislation to limit abortion in Arkansas," he said.

He said he believes there are exceptions to abortion.

"The problem is what we have now is abortion on demand," he said.

Asked about the state's Medicaid expansion program, Martin said "we have to be responsible and fiscally sound, and at the same time we have to have a safety net that makes sure that people who are truly poor ... that they have health insurance, they have the ability to have adequate health care, the ability to access food and housing."

He added that he is in favor of cutting taxes in a way that is responsible and helpful to the middle class and small businesses.

Russell of Little Rock, who operates a mental health clinic, said he is running so disaffected voters can feel they have a choice.

Asked how he would differentiate himself in the Democratic field, Russell said he is "probably the most outspoken about where I am on stances," referring to his mask with the reproductive rights slogan "Bans Off Our Bodies."

Xayprasith-Mays of Little Rock said she is inherently different from most of the candidates because she's an immigrant and one of the first women of color of Asian descent to run for governor in the Deep South.

She said her campaign is based on human rights, not political parties.

"We are all human first," she said. "We all want a strong economy and living wages."

Xayprasith-Mays said if she is elected she wants to raise pay for teachers and create a system where they can buy all the supplies they need for their classrooms without having to go into their own pockets to pay for them.

She also said she wants to address child care and advocates for pay increases for law enforcement.

On abortion, Xayprasith-Mays said she believes it should be a decision made by the woman alone.

"That is a decision that is so sacred that no government or man should be involved," she said.

Several Democratic candidates for various offices said Arkansas is not a red state, but a nonvoting state, citing the state's history of low voter turnout.

Libertarian candidate Ricky Dale Harrington of Pine Bluff said he hopes people see there is "leadership on the ground" outside of the two major parties.

"Hopefully we can show the people that there's a new way of politics, that we don't tear each other down. We try to build each other up with better policies," he said.

Harrington said he is personally pro-life but "can't control other people's actions."

"The discussion on abortion, first off, it fills me with grief," he said. "I just wish that we could find another way that would respect the rights of others and try to decrease the amount of abortions."

He added that he wished that "people would try to reach out and try to be more helpful to one another, such as opening one's home or pocketbook to someone considering an abortion.

Bequette said it is time for "new blood" and a change in the Republican Party.

"I'm proud to be an outsider. I'm not a career politician. I'm not from the establishment. I'm not an empty suit RINO," he said, which stands for Republican in Name Only.

James, a real estate agent in Little Rock, said she was excited to be part of a field of candidates that includes many other women of color.

"This is one of the most diverse tickets we've ever had in Arkansas," she said.

Earlier this month, Hodges told the Arkansas Democrat-Gazette that he was staying in the race despite a 20-year-old allegation of child molestation. Hodges was the subject of a Blytheville Police Department investigation in 2003 but was never arrested or charged.

Grant Tennille, chairman of the Democratic Party of Arkansas, said he had advised Hodges to drop out of the race before the filing period.

On Monday, the Young Democrats of Arkansas Executive Committee and a quorum of the group's chapter presidents announced that they had passed a resolution stating that Hodges should drop out of the race and that they would not support Hodges through volunteer work, financially or otherwise.

Hodges said he was not concerned about the investigation affecting his campaign.

"I've stood my ground," he said. "The party's entitled to their opinion. ... I'm running for people, not a party."

Republican U.S. Rep. French Hill of Little Rock filed for reelection in the 2nd Congressional District on Tuesday. Hill said he is proud of his conservative voting record in Washington.

Hill said he believes there needs to be support for schools, health care and high-speed broadband in rural parts of the state.

"I have done all three things while in office," he said.

Conrad Reynolds, a combat veteran and a government consultant on intelligence matters from Conway, filed to challenge Hill in the Republican primary. Reynolds said he is running to "get rid of RINOS in Congress."

Reynolds criticized Hill's support of the bipartisan January 6th Commission to investigate the 2021 insurrection at the U.S. Capitol.

"To me, no one in the 2nd District wants that. No Republican wants that," he said.

Republican Neil Robinson Kumar of Bentonville and Democrat Lauren Mallett-Hays of Farmington filed for the 3rd Congressional District seat, where U.S. Rep. Steve Womack of Rogers is the incumbent.

Womack, who filed for reelection Tuesday, said there is strong evidence that U.S. House Republicans have an opportunity to take control of the body from the Democrats in the 2022 general election.

"We are energized about what we feel like will be a very good year for Republicans nationwide," he said.

State Treasurer Dennis Milligan, who is seeking the Republican nomination for state auditor, was the first candidate to file for any state or federal office Tuesday.

He said he showed up at the Capitol at 5:30 a.m. Tuesday, but that's just a typical day for him.

"I just thank Arkansans for allowing me to be in the treasurer's office the last seven years, and I just want to show them I'm willing to work for Arkansas," he said.

No other candidate had filed or publicly announced for that post as of Tuesday evening.

Thurston, a Republican from East End, filed for reelection, along with a primary challenger, former state Sen. Eddie Joe Williams of Cabot. Democrat Josh Price of Maumelle also filed for the office.

Judicial candidates who had not already filed by petition began filing at the state Capitol at 3 p.m. Tuesday.

Both are running as constitutional conservative judges.

"I believe now more than ever people are seeing how important the courts are to their everyday life, and they deserve judges that reflect the values of the state," DeLay said.

Carnahan said he believes people vote for legislators to make the laws, not judges.

"You can't allow judges based on their likes and dislikes to nullify the will of the people," he said.