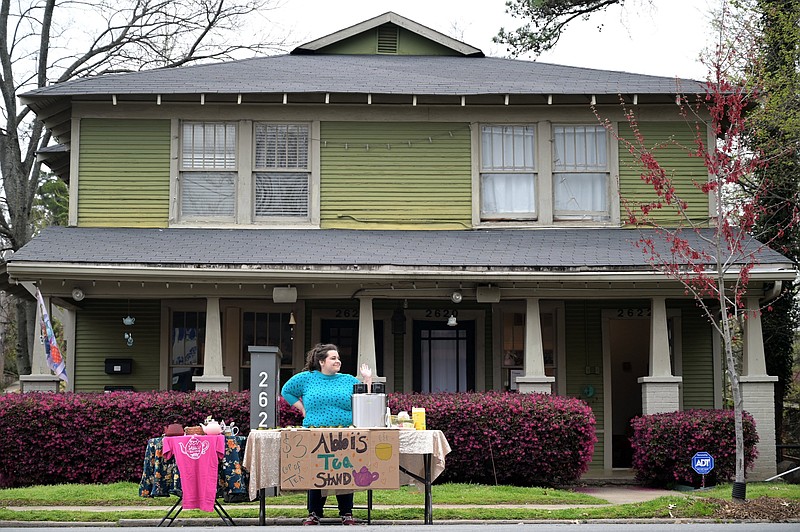 Abbi Siler set up a tea stand in front of her Kavanaugh Boulevard shop as the pandemic hit in March 2020. Siler is closing her current brick-and-mortar space and moving her operations online, with a new location pending. (Democrat-Gazette file photo)

March 15 is the target date for the opening of Arkansas' first Waldo's Chicken & Beer, 4221 Warden Road, North Little Rock (formerly Johnny Carino's). You will recall that it's a collaborative project from restaurant group JTJ Restaurants, which operates Petit & Keet, Cypress Social and eight Arkansas Taziki's Mediterranean Cafes, with Nashville, Tenn.-based Fresh Hospitality and a group of partners, who together operate a Waldo's in Tulsa.

The new North Little Rock Waldo's will seat 70 for indoor dining, with additional seating at the full-service bar and on a 650-square-foot patio. They're in the process of hiring for 30-40 front and back of house positions — apply at the restaurant, online through the website (waldoschicken.com/jobs) or call General Manager Joe Faucett at (501) 940-4552. Tentative hours of operation: 11 a.m.-9 p.m. Monday-Saturday, 11 a.m.-8 p.m. Sunday.

The first Waldo's opened in 2019 in Nashville's Germantown neighborhood; three subsequent locations have opened in Tennessee and Oklahoma. The made-from-scratch menu focuses on Southern-fried and fire-roasted chicken along with a local beer program for each location.

Meanwhile, we have progress to report on another JTJ project, the partnership with Walt Todd and Kelly Lovell of Count Porkula BBQ, which involves two new establishments in addition to the original in The Rail Yard, 1212 E. Sixth St. in Little Rock's East Village.

Target date is now around the first of April for the first, in the strip center that the Keet family of JTJ (that's James, Tommy and Jake Keet) recently bought in the 10800 block of Maumelle Boulevard, just east of where North Little Rock meets Maumelle, in what most recently was The Hangout Grill & Bar.

After some difficulty in obtaining construction permits, Lovell says, "the smokehouse is being built in the back; we're moving the front door from the side to the front; the concrete's been poured, the kitchen floor is done [and] equipment is going in." The smoker itself should be arriving mid-March. A management team, much of which James Keet says is coming out of the Taziki's operation, is in place. Considering the need for employee training and some soft openings, they're fairly confident about an early April launch.

Changes to the strip center, which also houses next-door Morningside Bagels, include a new roof, a new concrete slab in the back for an additional seven cars, restriping the front parking lot, and new paint for the exterior.

Meanwhile, Lovell says, "dirt work" started Monday on the Count Porkula at 201 Keightley Drive in Little Rock's Pulaski Heights (the site of the Ozark Country Restaurant, done in by a 2018 fire), and work there should continue steadily through the middle of August. The 2,900 square-foot restaurant is to feature indoor and outdoor seating, curbside, to-go service and online ordering, with the same or a similar menu to the existing Count Porkula operation.

Both the Keightley Drive and Maumelle Boulevard locations will have full bars and a new mixology program (Keet has been successful with such programs at Cypress Social and Petit & Keet).

Todd and Lovell started Count Porkula in 2008 as a food truck and moved into the Rail Yard building in 2018. Its website is countporkulabbq.com.

Like many area restaurants in progress, delays in the delivery of equipment had been holding up the opening of Chi's Baohouse, which had a target to open in February or March in the former La Madeleine Country Fresh Cafe, 12210 W. Markham St., Little Rock. That was before somebody broke in and cleaned out the kitchen of the equipment it already had, and also hit the building's electric and plumbing systems, says Chi Restaurant Group managing member Jacob Chi.

"We have all our recipes ready to go," Chi says. "Now we're having to start back from scratch." Once again, a timeline to open "depends on what it takes to get equipment in." Much also depends on what insurance will cover and the same supply-chain problems he'd been facing prior to the theft. "May, maybe," he says. "That's my gut impression."

You will recall that Chi group had held the La Madeleine franchise and, after that went under, had plans to put a second location of Lulu's Seafood Kitchen in the building, "but the economics of seafood changed dramatically during the pandemic," Chi has explained, adding that there will still likely be another Lulu's location somewhere, "when things even out a bit."

Once it opens, the Baohouse (an apparent play on the name of the early 20th century German art, craft and architecture school, the Bauhaus) will feature a four-pronged menu — all-day dim sum, a selection of signature Taiwanese baos (lotus-leaf-based buns surrounding meat, bean paste and other fillings), three or four noodle soups (including Chi's mother Lulu's recipe for beef noodle soup, plus pho and ramen options) and a range of boba teas. Chi says he also has a Rogers Baohouse in the works, to open four to six months farther down the line, with plans for additional outlets, including one in downtown Little Rock, which will eventually go into the ground floor of the building the family owns at 319 W. Second St., across from the Pulaski County Courthouse.

Meanwhile, speaking of bao, the second location of Three Fold Noodles & Dumpling Co., what the Three Fold folks colloquially refer to as "Three Fold West" in the former Panera Bread space in the Pleasant Ridge Town Center, 11525 Cantrell Road, Little Rock, is still progressing but has been facing delays; Three Fold manager Rebecca Yan says the issue has been getting kitchen equipment. April or May is now the target. The original is at 611 Main St. in downtown Little Rock.

March 20 will be Abbi's Teas & Things' last day of operation in its Hillcrest space, 2622 Kavanaugh Blvd., Little Rock. But, says Abbi Siler via Facebook (facebook.com/teasandthings), "This isn't goodbye. I'm NOT going out of business, I'm just 'shifting my sails,' as Mom says. Over the next months, I'll be finalizing a small manufacturing space where my online and blending operations will be housed and expanded! Then I will be transitioning to a smaller retail space to have my day-to-day operations. ... I'm simply shifting my business model and changing locations."

Initially, she says, the shop location "was like an answered prayer" until the 2020 advent of covid-19; Siler responded by opening a curbside tea stand "and changed my operations all while putting a considerable effort into growing my e-commerce and national footprint with fellow tea lovers. And, it's worked."

But meanwhile, "I don't feel comfortable having people eating and gathering in small or large groups unmasked for several hours a day at the shop. The potential exposure is just not worth it to me for my family or my customers. I can't even get some folks to wear a mask for 5 minutes as they 'just want to look around' right now without them swearing at me or causing a scene. It's exhausting and depressing. ... I've decided to let the overhead of this space go so I can maintain profitability."

Siler will continue to hold her "Tea Talks" — "virtual for now, but I'll be doing some outdoor tea talks when the weather warms up consistently, too." And she expects to announce sometime in March or April where she'll go next. Meanwhile, the shop is open 10 a.m.-6 p.m. Wednesday-Saturday, 1-4 p.m. Sundays. The phone number is (501) 246-5077; the website is abbiteas.com.

We've been unable to confirm it so far, but various sources have reported that apparently the Dickey's BBQ Pit at 9401 N. Rodney Parham Road, Little Rock, which closed in December, is apparently either open again or soon to open again, also reportedly under new ownership.

And an update on our mention last week of pending Central Arkansas outlets of Logan, Utah-based gourmet cookie chain Crumbl Cookies: The store in Benton's Hurricane Creek Village center, 20770 Interstate 30 North, debuts Friday with an 8 p.m.-midnight grand opening. We don't have hours of operation yet except that the website, crumblcookies.com/arbenton, specifies that it'll be closed Sundays. The phone number is (501) 557-3008. Meanwhile, two more outlets are in the works, expected to be up and running in the next couple of months: A Conway store in the Lewis Crossing Shopping Center, 1100 S. Amity Road, with a tentative opening set for late March, and a west Little Rock location in the Pleasant Ridge Town Center on Cantrell Road, with a grand opening in April. Arkansas' first outlet opened in Bentonville in September 2020. Customers can watch from-scratch cookies baking in an open kitchen.

And Jim and Aundrea Sparks have announced their retirement and the sale of their Home Plate Cafe & Bakery, 5110 Arkansas 7 North, Hot Springs Village, thanking customers for more than 14 years of "friendships with our guests, some of whom we see every day." New owners Marty and Tonya Porterfield own a dry cleaner and are former owners of Mueller's Bakery in Hot Springs.