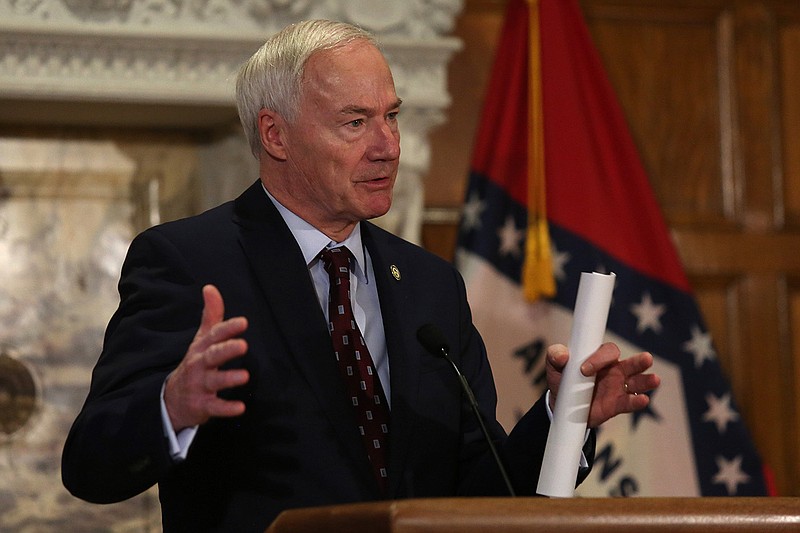 Gov. Asa Hutchinson expressed support Friday for Ukraine and for “the most severe sanctions that are available to us,” a necessary move, he warned, that would have an impact on Americans. (Arkansas Democrat-Gazette/Colin Murphey)

Government leaders across Arkansas expressed support Friday for Ukraine and called for a united effort in rebuking Russia's invasion of the democratic eastern European nation.

"I want to express my unequivocal support for the people of Ukraine as they strive to protect their independence, their sovereignty and their freedom," Hutchinson said. "Our prayers are with them."

Hutchinson said the United States needs to be clear in its unequivocal support for Ukraine and with its condemnation of Russia's actions.

"We must impose the most severe sanctions that are available to us and understand that this is not a short-term concern, but this is a long-term concern with the actions that Russia have taken under the leadership of Mr. Putin," the governor said.

Hutchinson also warned that current sanctions being placed on Russia will have an impact on the United States and Arkansas.

"The concern would be energy sources, and it's a global marketplace, so what happens in that part of the world impacts prices here in the United States," he said.

Sanctions might restrict the U.S. supply chain but are necessary, Hutchinson said.

"I think Arkansans understand that we can't stand idly by even though there is a cost to every action," he said. "It's necessary."

U.S. Sen. John Boozman, a Republican from Rogers, told reporters during his candidate filing that the situation in Ukraine was important because the world sees how countries like America respond.

"It's important from that sense, but it's also very important regarding the Chinese watching, the Iranians watching, our response," he said. "I've been pleased at the Europeans and the United States working together, starting to come out with very significant sanctions."

"The forcible invasion and attack of a sovereign nation is illegal and a dangerous affront to the international community," Womack said in the statement Thursday.

"Make no mistake, his step is definitive and makes clear his desire to reorient the world order, however Putin's folly will not go unanswered by the international community," Hill, a Republican, said in a statement Thursday. "My prayers are for resolve and safety for the Ukrainian people as this dark chapter begins."

U.S. Rep. Rick Crawford of Jonesboro issued a statement describing the invasion as "despicable," but said it didn't come as a surprise.

"Putin has been very clear about his intentions to create a buffer around Russia with nations he can dominate and keep under his effective control," the Republican said in a statement Thursday.

Crawford told the Arkansas Democrat-Gazette on Friday that there were a lot of things that could have been done earlier but now the U.S. must be more proactive.

"What are we going to do to stop him?" Crawford asked. "It starts by trying to rebuild trust with our allies in the region, allies like Poland and Romania. It means that we're probably going to have to do things less rhetorically and more action.

"So, for example, sanctions that work targeting those highest individuals in the regime, oligarchs in the country and even Putin himself."

Crawford said it also means America needs to ask Germany and France to reconsider their relationships with Russia.

"We're going to need them to lead on this issue because this is a regional impact of them directly," he said. "Ukraine is a European nation, not part of Russia. That's the way the Ukrainians view themselves, and they need European allies to support that position."

"The Russians need to understand that because of this aggression they're going to pay a very significant price," he said.

"I think Congress probably feels we need to go further right now, but there's a disagreement there, Republicans and Democrats," he said. "So we'll be back in session next week and really start to come out, I think, with specific things that we would like to increase and do that in a very bipartisan way."

Boozman said there is a true sense of war right now that is bringing people together.

"I'm pretty pleased with how it's going, not only with Congress in our country but again so importantly working with our allies," he said. "They're very dependent on Russian oil and gas, so there's a lot of leverage there. They've backed off and said, no, this is too much and they simply aren't tolerating it."

There were criticisms of Biden's handling of the situation in Ukraine by a couple of state leaders. Among the most vocal within the state's congressional delegation was U.S. Sen. Tom Cotton, who on Friday said Biden and NATO leaders "need to quit pussyfooting around."

Sanctions announced by the U.S. on Thursday were "wholly inadequate," Cotton, a Republican, said during a television appearance.

"If you want to put real consequences on Vladimir Putin, you want to make him think twice, we need to sanction his oil and gas exports," Cotton said.

Russia, he said, has a lot of leverage over European nations.

"It's time for those European countries to recognize the mistakes they've made. They can seek help from [the] United States," he said, suggesting the U.S. and its partners can export liquefied natural gas to them.

The junior senator from Dardanelle also weighed in on reports that residents in Ukraine had been sheltering in subway stations.

"It may be even more dangerous to stay in their homes or stay in their apartment buildings," he said. "This is the kind of choices that Ukrainians now face because we failed to deter Vladimir Putin."

Hutchinson told reporters he believes Biden should have been quicker with sanctions against Russia.

"That would have been more important early on," he said.

Hutchinson said immediate sanctions should have been triggered when Russia announced it recognized rebel-led parts of Ukraine as independent.

"We don't need to hold anything back right now," he said. "We need to give the full weight of our sanctions now."

The removal of Russia from the SWIFT financial system has been discussed at the global level, but so far the United States and the European Union have held back from that measure.

SWIFT is a high security messaging network that connects thousands of financial institutions around the world and is key to the smooth transaction of money worldwide.

Ukraine appealed for Russia to be removed from the system after Putin ordered the invasion Thursday.

Economists have said the removal of Russia from SWIFT would have consequences on the global economy because the energy supply would be disrupted in Europe.

Asked about the removal of Russia from SWIFT, Hutchinson said the strictest sanctions available should be put in place.

"If that is a sanction that is on the table and historically been done, then it ought to be utilized as well," he said. "I think you have to understand the repercussions of that, so I want to make sure before we jump there we understand what that means. I know the administration has, but I would want to look at that more carefully. But I think the message is let's not hold anything back."

Hutchinson also emphasized the need for America not to be dependent on foreign sources of energy.

"We need to strengthen the supply in the United States versus the curtailing of it that has happened during the Biden administration," he said. "We need to make sure Europe has more access beyond Russia for energy supply. We have to work together as a global community to protect the independence and supply chain of critical resources such as energy."

Despite tensions, Arkansas officials said an American military presence in Ukraine is not the answer.

"Ukraine is not a member of NATO, so Article 5 isn't in play here," Crawford said. "The other thing is Ukraine would probably like to be a member of NATO, which is why Putin's taking this action among other reasons, but there is no, you know, basis for us to send troops to Ukraine at this point."