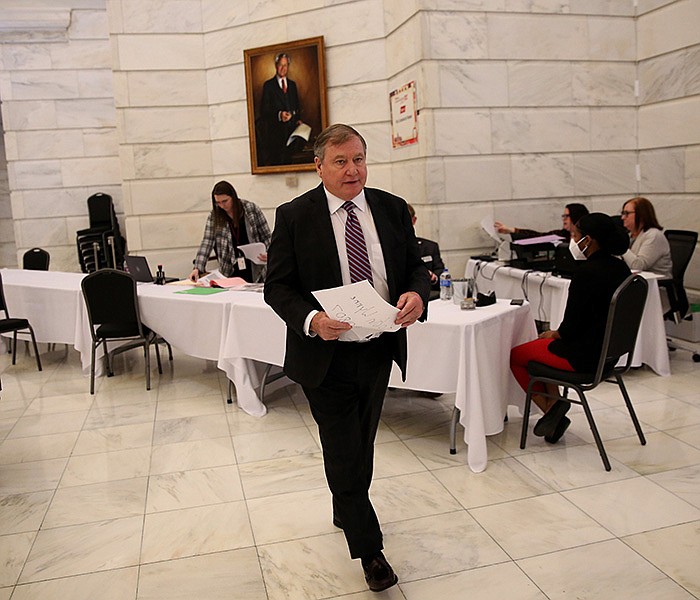 Arkansas Supreme Court Justice Robin Wynne (center) prepares to have his picture taken Friday at the state Capitol after filing to run for another term. (Arkansas Democrat-Gazette/Colin Murphey)

U.S. Sen. John Boozman and U.S. Rep. Rick Crawford filed for reelection Friday at the state Capitol, the fourth day of candidate filing for state and federal offices in Arkansas.

The filing period for the 2022 elections kicked off Tuesday with 283 candidates filing that day. The flow of candidates coming to the second-floor rotunda to file their paperwork with the secretary of state's office slowed midweek because of winter weather and icy roads in much of the state but picked up again with 43 candidates filing Friday. Filing won't take place over the weekend but resumes Monday and ends Tuesday.

Boozman, a Republican from Rogers, will face two challengers, former University of Arkansas football player Jake Bequette of Little Rock and pastor Heath Loftis of Stuttgart, in the GOP primary. Both describe Boozman as a "RINO", or Republican In Name Only.

"We need strong, conservative leadership in Washington and to push back on the Biden-Harris agenda. I think we've done a really good job of that through the years whether it's protecting life, whether it's standing up for law enforcement, standing up for veterans, religious liberty, the list goes on and on," Boozman told reporters after he turned in his filing paperwork.

"I think I've got a really good record in that regard that I'm very proud of," he said.

Democrats Jack Foster of Pine Bluff, Natalie James of Little Rock and Dan Whitfield of Bella Vista have filed to seek their party's nomination for the U.S. Senate race.

Libertarian Kenneth Cates also filed Friday to run for the seat. Cates said his platform is based on small government, reducing the national deficit and securing individual rights.

"What sets me apart from my opponent is that I care about the people, not corporations and special interest groups," he said.

Cates is one of a record 53 Libertarian candidates the party nominated over the weekend. Because the Libertarian Party of Arkansas is considered a new political party that gained access to the ballot by petition, it nominates candidates by convention rather than having them determined in the partisan primary in May.

Crawford, a Republican from Jonesboro who was first elected to the U.S. House in 2010, said his constituents have put a lot of trust in him over the years.

"We're doing a great job, and I think people here in the 1st District know that," he said. "I serve on some key committees that are really integral to not only the 1st District of Arkansas, but the state, so I'm a big believer in maintaining continuity. When something's working, you stick with it."

Washburn joins Sarah Huckabee Sanders in seeking the GOP primary for Arkansas' governorship. On his website, he said he is running for governor because "Arkansans have made it clear they want an actual conservative Governor, not more of the same 'pretend' conservatism."

Washburn was a radio host on KARN-FM, 102.9, until last fall, when he was fired for refusing to comply with the company's vaccine mandate. He now hosts a podcast.

In an interview Friday, he said he would eliminate the state's income tax as soon as possible.

"We're one of the most highly taxed states across the board, and every once in a while our politicians say we're going to reduce this tax over here, don't look as we're increasing this over here," he said. "We need to compete with our neighboring states and economically, fiscally we can only do that by lowering the tax burden. You know, Florida doesn't have a state income tax. Last time I checked, they're doing pretty good."

He said the state's Medicaid expansion program that provides health coverage to more than 300,000 low-income Arkansans needs to be revised to include a work requirement.

"Anytime you have state health insurance benefits like that and you don't have any kind of work requirement, I think that's a problem," he said, adding that he would study the issue more.

Washburn said he would have supported an abortion bill modeled after a law in Texas that Republican lawmakers in the statehouse recently proposed, which allows a ban on the procedure to be enforced by private citizens through lawsuits. He said he would be in favor of a special session to outlaw abortion in Arkansas if Roe v. Wade, the 1973 U.S. Supreme Court decision that legalized it, is overturned.

Wynne, who has served in Position 2 since 2015, said he has enjoyed getting to apply the law to state Supreme Court cases. He said he believes the best way for Arkansas voters to determine who to vote for in judicial races is to look at their legal opinions.

"My job is not to make the law, but to interpret it in each case," Wynne said.

District Judge Chris Carnahan of Conway also has filed to run for the position. 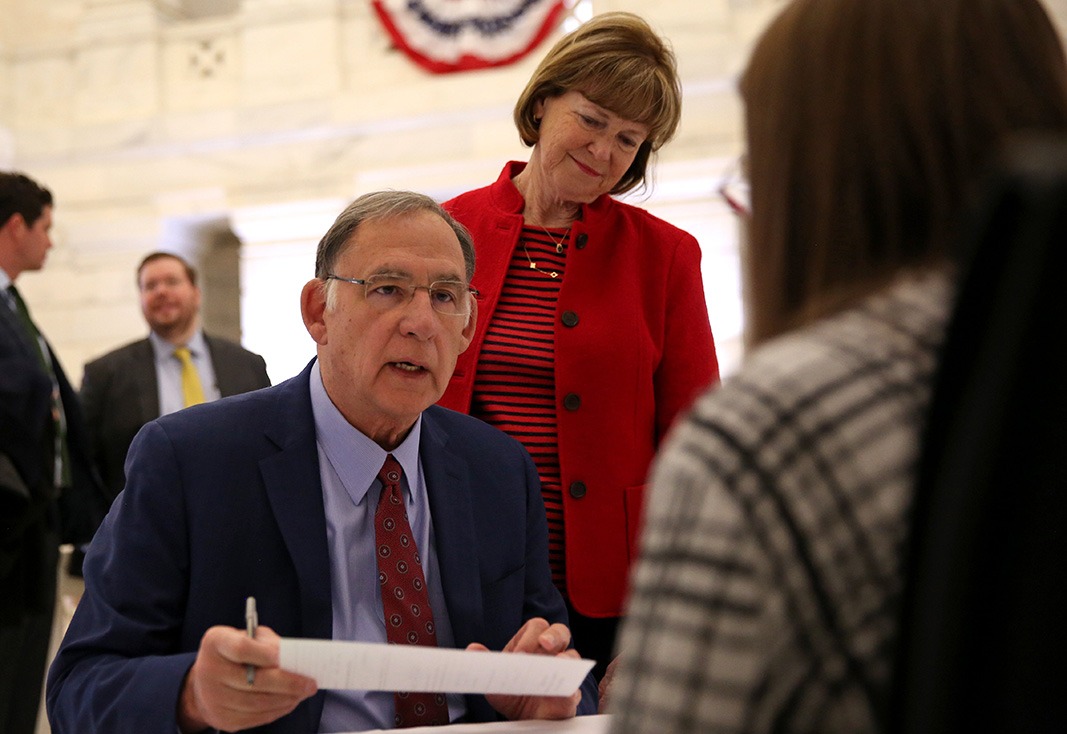