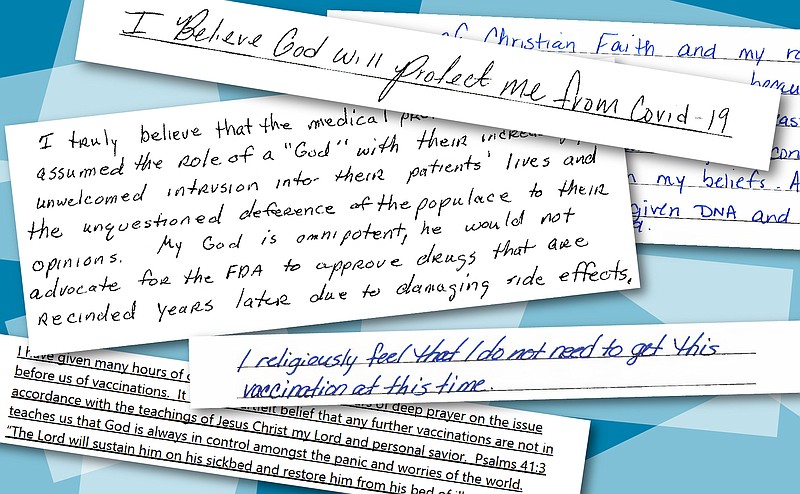 Several employees of the Arkansas Department of Human Services requested and received exemptions from a federal covid-19 vaccination requirement due to their religious beliefs. Their reasons ranged from concerns that the vaccine is unsafe, objection to the use of fetal cell lines in developing the vaccines and faith that God alone will protect and heal them from covid-19.

Told to get vaccinated, one state employee insisted, "I leave all medical issues in God's hands."

Another wrote, "The vaccine is unnatural and will pollute my body which is made in His image."

A third claimed, "Taking the vaccine would be an expression of my lack of faith in my God-given immune system."

At the Arkansas Department of Human Services, 288 employees have requested and received religious exemptions for vaccination against covid-19, according to department data.

The department provided the Arkansas Democrat-Gazette with 263 exemption request forms, all with employees' identifying information redacted, in response to an Arkansas Freedom of Information Act request.

Human Services is one of three state agencies affected by the Biden administration's vaccination mandate for workers in health care facilities that receive Medicare and Medicaid funding.

Employees at these facilities must be fully vaccinated against covid-19 or receive religious or medical exemptions, according to a November 2021 mandate from the federal Centers for Medicare and Medicaid Services. Facilities that do not comply with the mandate risk losing federal funds that their leaders say are necessary to function.

Arkansas was one of 10 states to challenge the mandate in federal court, but the U.S. Supreme Court upheld the rule in January.

The Arkansas Legislative Council granted the three state entities -- Human Services, the Department of Veterans Affairs and the University of Arkansas for Medical Sciences -- exceptions to the 2021 state law prohibiting covid-19 vaccination as a condition of employment at state-run agencies.

All three entities provided the Arkansas Democrat-Gazette with exemption data, though UAMS and the Veterans Affairs Department declined to provide the religious exemption forms themselves. Medical exemption forms are private medical records.

The federal deadline for receiving the first covid-19 vaccine or an exemption was Feb. 14. Employees who chose vaccination must receive their second shots by March 14. Employees granted exemptions will be subject to weekly testing and must wear masks.

A "deeply held" or "sincerely held" belief is the widely accepted basis for vaccination exemptions. In January, leaders of all three state agencies reassured state legislators that they would process and approve exemption requests, especially religious ones.

Not all of the agencies' vaccine objections related to coronavirus vaccines; some employees also requested exemptions from mandatory flu shots.

The wide range of religious reasons cited by Department of Human Services employees could be summarized in a few categories:

• Some employees said they prayed extensively about the vaccine and concluded that God did not want them to receive it. They said they would not violate their consciences and would instead choose to exercise God-given free will in refusing the vaccine. Some called the federal mandate "coercive" and a violation of free will.

• Some employees claimed vaccination displayed a lack of faith in God's plans, the immune system or the healing power of prayer. A few employees elaborated further that medical professionals were assuming the role of God in creating and encouraging vaccines.

• Many employees cited scriptural references to the human body being a temple of God and the apparent sin of introducing "foreign" substances into the body. This argument often went hand in hand with the false claims that covid-19 vaccines alter DNA or lack sufficient testing and research to be safe.

• Human fetal cells, derived from elective abortions performed decades ago, were used in the development of covid-19 vaccines, and the connection to abortion puts vaccination in conflict with some religious tenets.

The requests included nearly 300 references to a cumulative 109 Bible verses. The most frequently cited passage was 1 Corinthians 6:19-20: "Do you not know that your bodies are temples of the Holy Spirit, who is in you, whom you have received from God? You are not your own; you were bought at a price. Therefore honor God with your bodies."

Additionally, 31 forms cited the legally protected freedom of religious practice encoded in Title VII of the Civil Rights Act of 1964, as well as the U.S. and Arkansas constitutions.

Some employees said they had worked at Human Services facilities for decades and hoped their work would continue to be valued.

"I feel my position greatly helps those in their greatest time of need," said one employee. "I believe this is why we were all drawn to healthcare."

The federal mandate requires health care facilities to adhere to the Equal Employment Opportunity Commission's guidance, which assumes that religious exemption requests are sincere unless there is "specific information that provides an objective basis for questioning the request," Department of Human Services spokeswoman Amy Webb said in an email.

Exempted staffers at all three state-run agencies must wear N95 masks, even if they do not interact directly with patients, and must be tested weekly for covid-19.

Seven Human Services facilities fall under the federal mandate: five human development centers, the State Hospital and the Arkansas Health Center. The majority of employees at all seven facilities were fully vaccinated by the end of January.

The Department of Human Services also granted 22 medical exemptions, according to the data.

UAMS Chancellor Cam Patterson told the Legislative Council in January that nearly 2,000 UAMS employees were unvaccinated at the time.

The mandate also applies to the state veterans homes in North Little Rock and Fayetteville. The homes provide veterans with nursing home services.

Nine of the 146 veterans home employees have requested covid-19 vaccine exemptions, and all nine were still being processed Friday, Harper said. Eight requests are for religious reasons and one is for medical reasons.

The department also granted one flu shot exemption request in the past year, Harper said.

"Partaking in a vaccine that utilized aborted fetuses makes me complicit in an action that offends my religious faith and belief that ALL life, including the unborn, is sacred and holy," one employee wrote.

The fetal cells in question were initially obtained in the 1970s from elective abortions performed in the Netherlands and are now grown in a laboratory. These cells contributed to the development and study of several common medications, including ibuprofen and acetaminophen, in addition to vaccines, according to multiple published studies.

However, contrary to some claims on Human Services exemption forms, the covid-19 vaccines do not contain fetal tissue.

Some employees claimed that the development of the vaccine was rushed and "experimental," with too high of a risk of adverse side effects, and it would be a sin to knowingly participate in something that could harm them.

Others claimed that the vaccines alter DNA, and it would be a sin to change what God has created.

Still others said the vaccines are ineffective because vaccinated people can still contract symptomatic covid-19.

Health care officials have said vaccines prevent coronavirus infection, and vaccinated people who contract the virus are more likely to experience fewer and milder symptoms, if any. State, national and international public health experts have repeatedly said the vaccines are safe.

Employees' opinions varied on the morality and efficacy of vaccines as a whole. Some said they have never received or supported receiving any vaccines; others said their research into vaccine ingredients meant they would refuse all future shots. Still, others said they believed in some vaccines but not those for covid-19.

"I fully believe that a Christian can, with a good and clear conscience, submit to valid medical procedures, including receiving tested and proven medications and vaccines, and at the same time give thanks and glory to God who, through the ordering of his creation, has provided the methods and means for such wonderful medical advancements," one employee wrote. "However, when these medical procedures, medications and vaccines are not thoroughly tested and proven, it serves to violate the Christian's conscience to take them."

Not everyone who received a religious exemption identified as a Christian. One person said the vaccines' connection to abortion conflicted with the Islamic belief in the sanctity of life, and another said the Norse gods would protect them from covid-19.

Fourteen Human Services employees said they believe the covid-19 vaccine is "the Mark of the Beast," as told in Revelation, the final book of the Bible that details the end of the world and the second coming of Christ.

As a result, some employees said they believed their souls could be condemned to hell if they were vaccinated against covid-19.

One such employee further stated that "man has gone too far 'in the name of science', placing themselves as equal to or greater than God."

Similarly, dozens of employees said trusting the vaccine to keep them safe was to take that trust away from God.

"Some people may assert that doctors, medical researchers, pharmaceutical companies et al. are God's conduits," one person wrote. "I have witnessed too much harm to believe my God is directing these individuals. I truly believe the medical profession has assumed the role of 'God' with their increasingly unwelcome intrusion into their patients' lives and the unquestioned deference of the populace to their opinions."

Even more employees said God would protect them from covid-19 or heal them if they contracted it. Some said they had already had covid-19 at least once and recovered because of their faith in God.

Four employees wrote that only God can decide when a person's life ends.

"If my good Lord and Savior deems it necessary to go, no vaccine can help me," one wrote. "Modern science is just that ... science. My God leads my life. Not men with a history of failure." 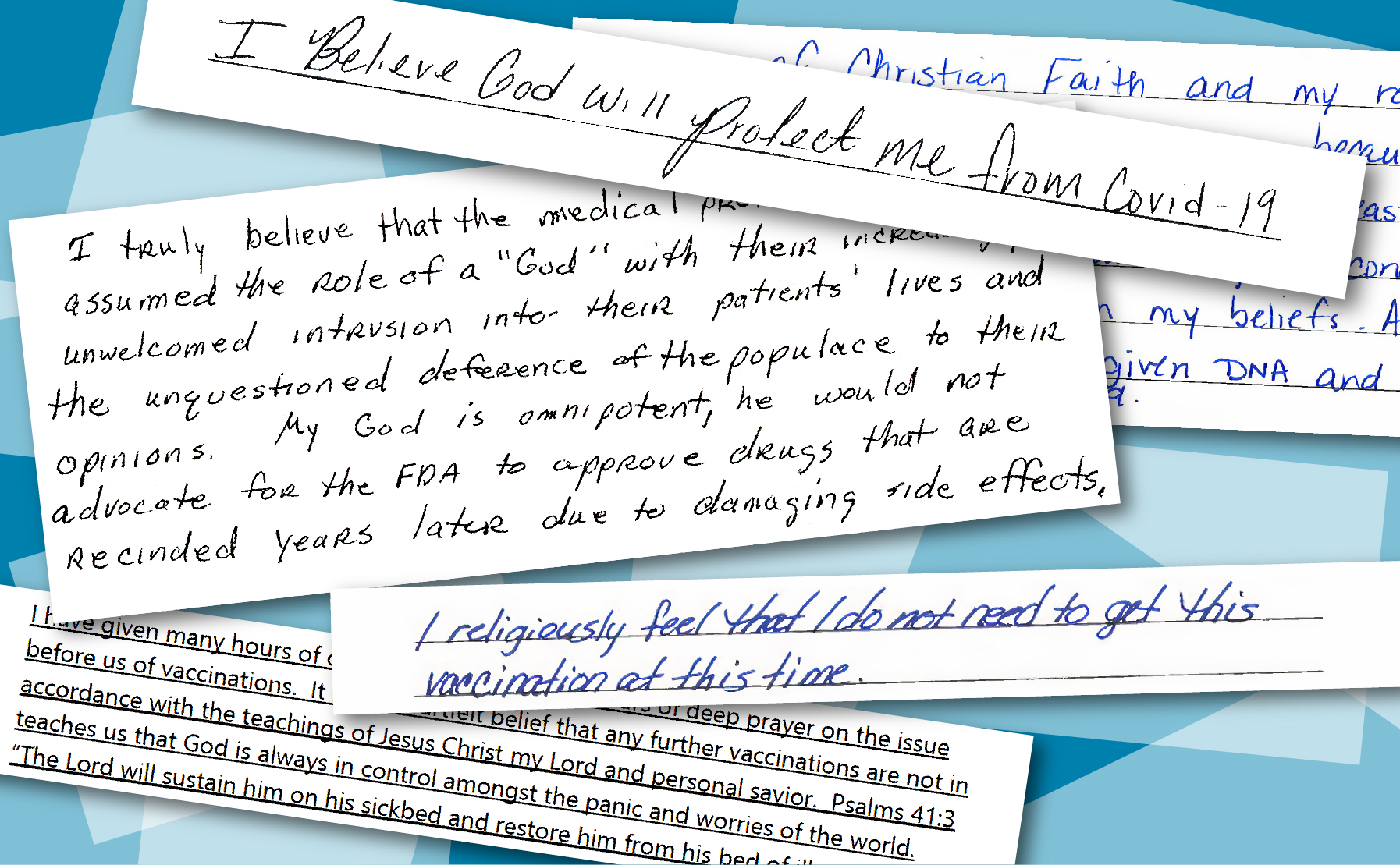 Several employees of the Arkansas Department of Human Services requested and received exemptions from a federal covid-19 vaccination requirement due to their religious beliefs. Their reasons ranged from concerns that the vaccine is unsafe, objection to the use of fetal cell lines in developing the vaccines and faith that God alone will protect and heal them from covid-19.