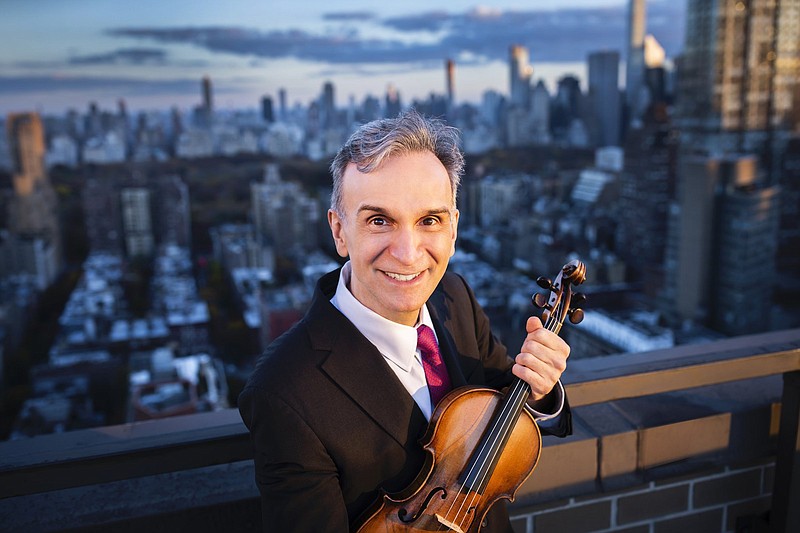 Violinist Gil Shaham, the highest-caliber international soloist to join the Arkansas Symphony this season, or for several seasons prior (don't forget we waited two additional years -- thanks, covid-19 -- for him to show up), set the stage ablaze in the "Violin Concerto" by Samuel Barber on Saturday night at Little Rock's Robinson Center Performance Hall.

ASO Artistic Director Geoffrey Robson, himself a violinist of some consequence, was superb on the podium.

Every note on Shaham's 1699 "Countess Polignac" Stradivarius sounded as clear as the proverbial bell, even in the fiendishly difficult "Presto in Moto Perpetuo" finale.

One wouldn't think that human fingers and a right arm could move that fast, or that you'd be able to distinguish one note from another at that speed, but there you are. And Shaham's nods and joyous facial expressions during the orchestral passages in which he wasn't playing showed he was having as good a time as the audience.

Shaham -- worth every penny that the sponsoring Stella Boyle Smith Trust forked over to bring him here -- unselfishly refused to take solo bows after, insisting on including the orchestra and not letting go of Robson's hand. The enraptured audience earned its encore: the "Gavotte en Rondeu" from J.S. Bach's "Violin Partita No. 3."

Gorgeous music, gorgeously performed and masterfully conducted, surrounded the concerto, with Florence Price's sonorous and lively "Ethiopia's Shadow in America" as the curtain-raiser and, occupying the entire second half of the program, Peter Ilich Tchaikovsky's "Symphony No. 5" in e minor, op. 64. The string sound was particularly lush and the brass and woodwinds, particularly in the latter movements, simply outdid themselves.

The weather and the orchestra's making available a concert livestream probably diminished the in-house audience. Here's hoping the hall will be fuller when Shaham, Robson and the orchestra repeat the program at 3 p.m. today at Robinson, 426 W. Markham St. at Broadway.

Ticket information and covid-19 protocol details are available by calling (501) 666-1761, Extension 1, or online at ArkansasSymphony.org.