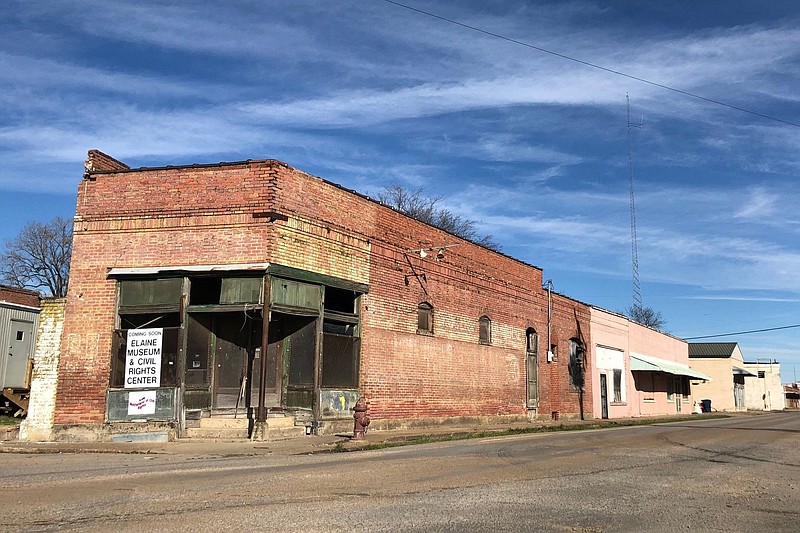 The former Lee Grocery Store in Elaine sits at the intersection of Main Street and Quarles Road. The building, which was added to the National Register of Historic Places in 2020, is the new home of the Elaine Museum and Richard Wright Civil Rights Center, which is being built by the nonprofit Elaine Legacy Center. (Arkansas Democrat-Gazette/Sean Clancy)

ELAINE — Prominently situated at the corner of Main Street and Quarles Road is what might be the oldest commercial building in this small farming town in south Phillips County. And after years spent sitting empty, it's getting a new life as the Elaine Museum and Richard Wright Civil Rights Center.

"The museum is going to help this town a lot," says James White, director of the Elaine Legacy Center, the nonprofit behind the museum. "We are going to put the truth there. This is stuff that needs to be known, the truth of what really happened here."

The museum, along with the Delta Heritage Bicycle Trail — which is just across Quarles Road — has the potential to bring new visitors to town, says the Rev. Mary Olson, spokeswoman for the legacy center.

"This is far more than a museum. This can be a hub for a whole new prosperity in Elaine built around heritage tourism and the bicycle trail."

The wedge-shaped building that will house the new museum and civil rights center was added to the National Register of Historic Places in February 2020.

Believed to have been built about 1915, the single-story structure, with its recessed corner entry, may have been a drugstore in the first part of the 20th century, according to the National Register nomination form. In the early 1950s it became Lee Grocery Store when it was bought by W.J. Lee, a Chinese immigrant who worked as a hotel manager in San Francisco before moving to Arkansas to start a grocery business.

The store was passed down to Lee's sons, Seat and Sam. The building was owned by the Lee family until they sold it in 2014, according to the nomination form.

In 2017, with money from an anonymous donor, the space was bought by Waves of Prayer, the church associated with the legacy center. The deed was transferred to the legacy center, according to Olson, who is also the church's minister. 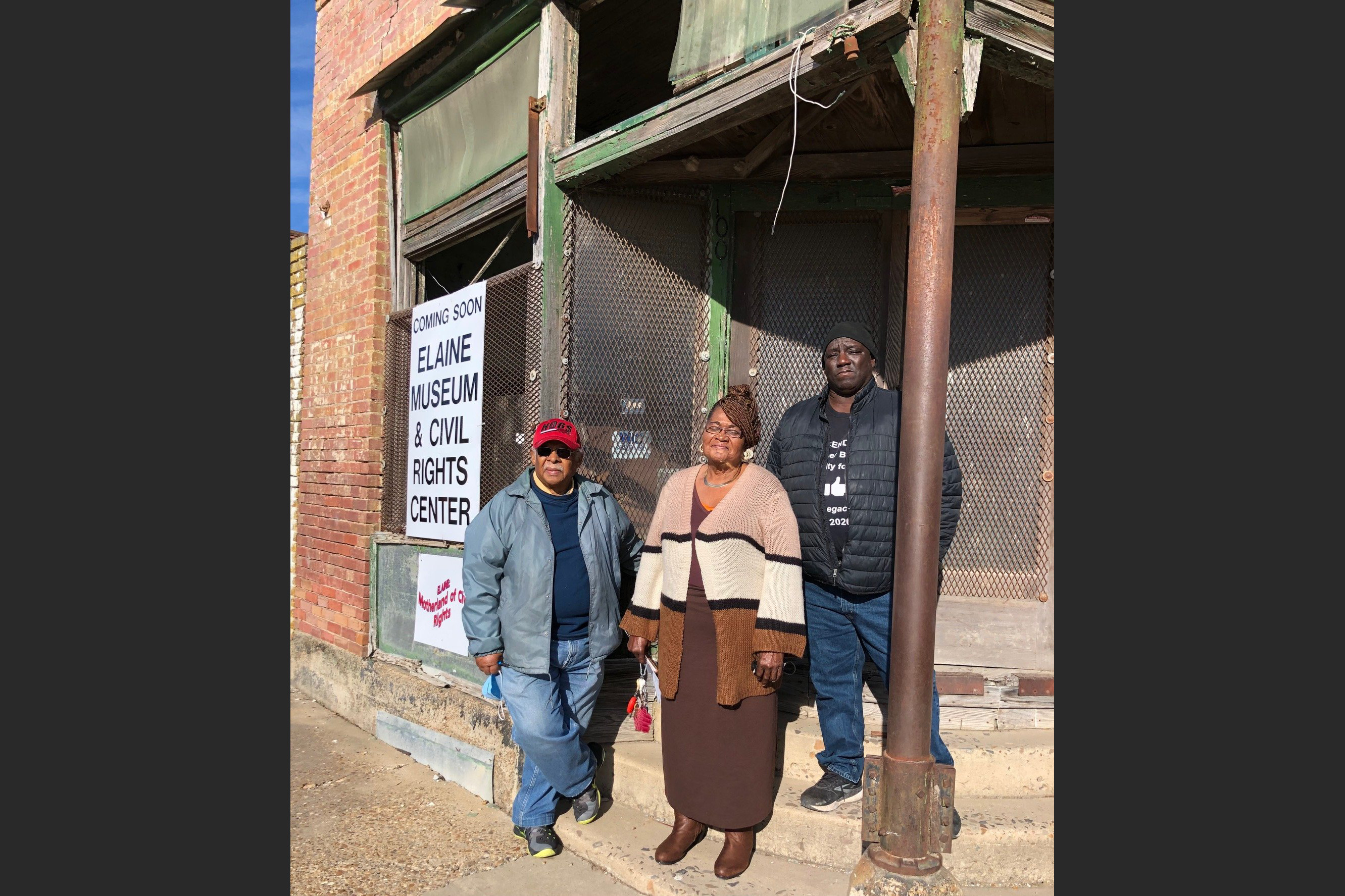 Elaine Legacy Center president William Quiney III (from left), vice president Lenora Marshall and director James White pose at the former Lee Grocery Store in Elaine. The building, among the first commercial structures in the town, will be the new home of the Elaine Museum and Richard Wright Civil Rights Center. (Arkansas Democrat-Gazette/Sean Clancy)
On a bright, chilly January morning, contractor and Elaine native Mark Jackson shows us around inside the building, which has about 2,500 square feet. Part of the pine flooring toward the back has collapsed; some of the beadboards in the ceiling are missing; there has been some water damage, and the roof needs work, but it could be worse.

"As much of the building as possible is going to be preserved," says Jackson, owner of Little Rock-based Central Arkansas Contracting. "This is a renovation/preservation project. We want to preserve these bricks and even the flooring. We want to leave pretty much everything like it was back in the day."

He remembers coming to Lee Grocery when he was growing up.

"Lots of times we would walk here after school."

Funds for the restoration have come from donations and grants from the National African American Reparations Commission and Funds for Reparations NOW!, Olson says.

The center hired Little Rock architect Ed Sergeant to come up with a renovation that retained the building's historical elements while also updating the space for visitors.

"I'm drawn to historic preservation as much as I am to new work," says Sergeant, who has been a team member on construction projects at Bathhouse Row in Hot Springs and the Clinton Presidential Center in Little Rock. He was also project manager at Heifer International and the Central Arkansas Library System Arkansas Studies Institute, among others.

The museum, he adds, "is an adaptive reuse of a historic structure, which I love. It's a wonderful location and it wasn't stripped of its historic elements. Everything is there."

Sergeant says his goal is to make the space comfortable and welcoming for the public as they learn about the history of the area.

"The center's theme is going to be looking at history, and all the better because they will have a wonderful historic structure that will help visitors connect back to historic events." 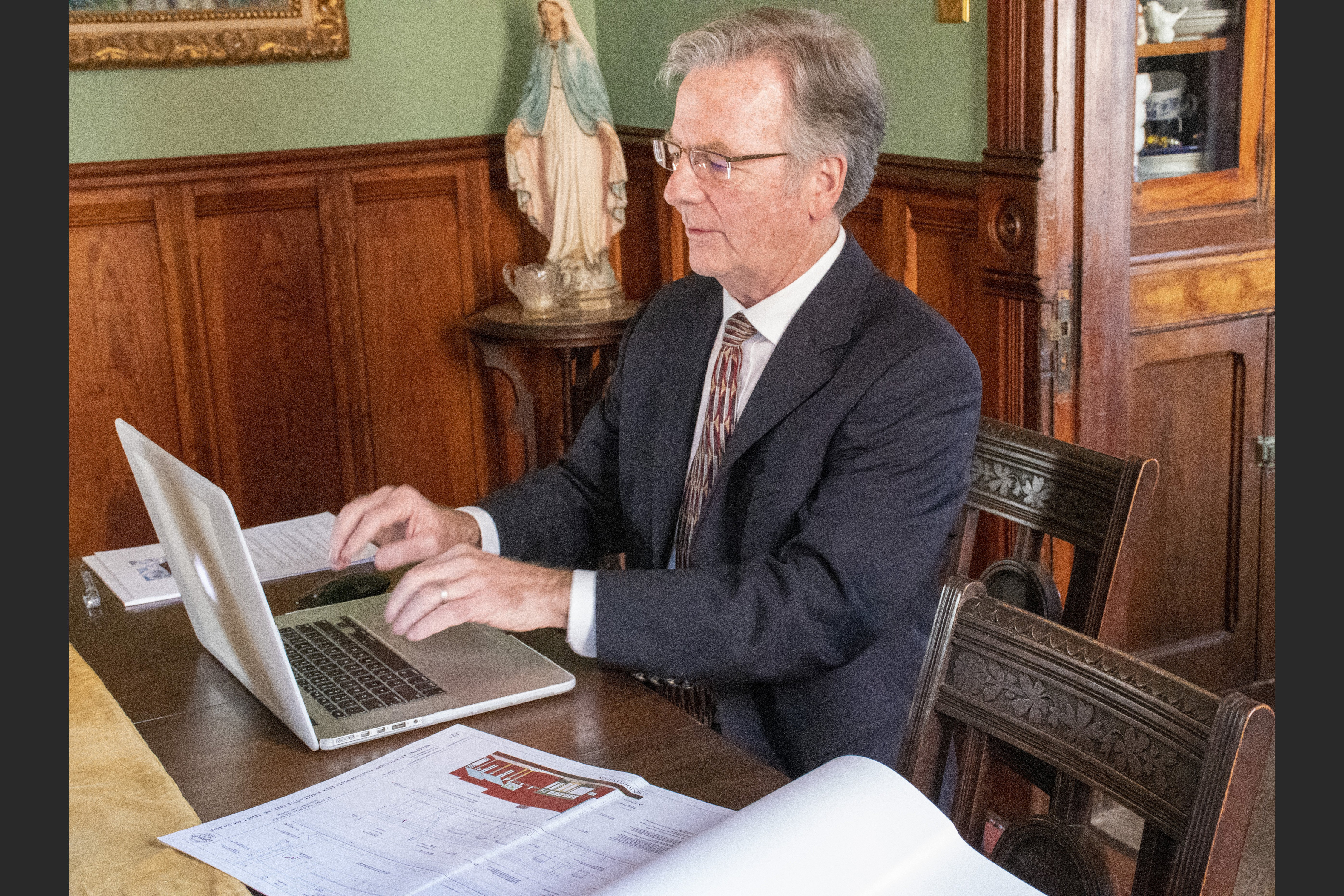 Little Rock architect Ed Sergeant has worked to create a design for the Elaine Museum and Richard Wright Civil Rights Center that retains the building’s historic features while also modernizing the space. (Arkansas Democrat-Gazette/Cary Jenkins)
The historic event most closely connected to this area is the Elaine Massacre.

Called the "deadliest racial confrontation in Arkansas history and possibly the bloodiest racial conflict in the history of the United States" by the online Encyclopedia of Arkansas, it is estimated that hundreds of Black people were killed by a white mob in the days after a Sept. 30, 1919, shooting outside a meeting of the Progressive Farmers and Household Union of America.

The meeting, which took place at a church in Hoop Spur three miles north of Elaine, was one of several held during previous months in an effort to help Black workers receive better payments for their crops from white plantation owners.

Five white people were killed during the violence that lasted into the early days of October.

More than 500 U.S. troops were sent to Elaine by Gov. Charles Brough from Camp Pike in North Little Rock. A photo that accompanies the entry about the massacre at encyclopediaofarkansas.net shows a large crowd outside the building that will become the Elaine museum, waiting for the arrival of the soldiers.

The Elaine Legacy Center was formed about six years ago by descendants of massacre victims to "research, preserve and share the oral history of Elaine" and as a "foundation for ending poverty for descendants of the massacre and others living on the killing fields of 1919," according to its website.

The center and Waves of Prayer are based in the former Elaine Elementary School building at 313 College Ave. The center also operates a food pantry, holds classes, senior citizens programs and hosts performing arts and other special events here.

Gathered in what was once the school's cafeteria are legacy center president William Quiney III, vice president Lenora Marshall, director White and Olson.

Marshall talks about the mission of the museum that, among other things, will be a repository for oral histories of the area:

"When you think of relatives who were brutally murdered, their lives taken needlessly and descendants losing the value system that was put in place, you want some kind of compensation or reward and to see justice and put the story out, to allow the children of today to know what our ancestors went through. Let the true story be told."

"We want the truth out there," White says. "They buried the truth. They buried our history. We are digging it up and preserving it in our museum. There are people who have lived here all their lives. They were told, 'Keep your mouth shut. Don't talk about it.' To this day, people are traumatized."

Marshall remembers growing up and adults being "reluctant to give you details of what happened. You may have heard a little something, and if you stood next to a closed door you might hear a little bit more. They tried to preserve us by not giving us a lot of that information."

She learned about the massacre in part from an aunt "who spoke freely," she says.

Quiney says his wife's grandfather would talk about being forced to dig a mass gave to bury victims:

"Even today, it disturbs me greatly. I'm still a part of it. My children knew about it because it was shared with them. Prayerfully, their children will know about it. If you don't know the past, you are subject to repeat those things that went on. I want my children, my grandchildren, my great-grandchildren and those born after my wife and I are gone to know the truth."

One of the consequences from the events during and after 1919, according to legacy center members, was the illegal taking of Black-owned land and businesses.

"There were Black businesses here," White says. "People owned land here. It might not have been a lot, but they owned it. That story doesn't come out. The story was that it was just sharecroppers and everybody was poor and Blacks didn't have anything, but that's not true. My people owned land. These people brought troops in here and demolished everything, and people ran away and left everything." 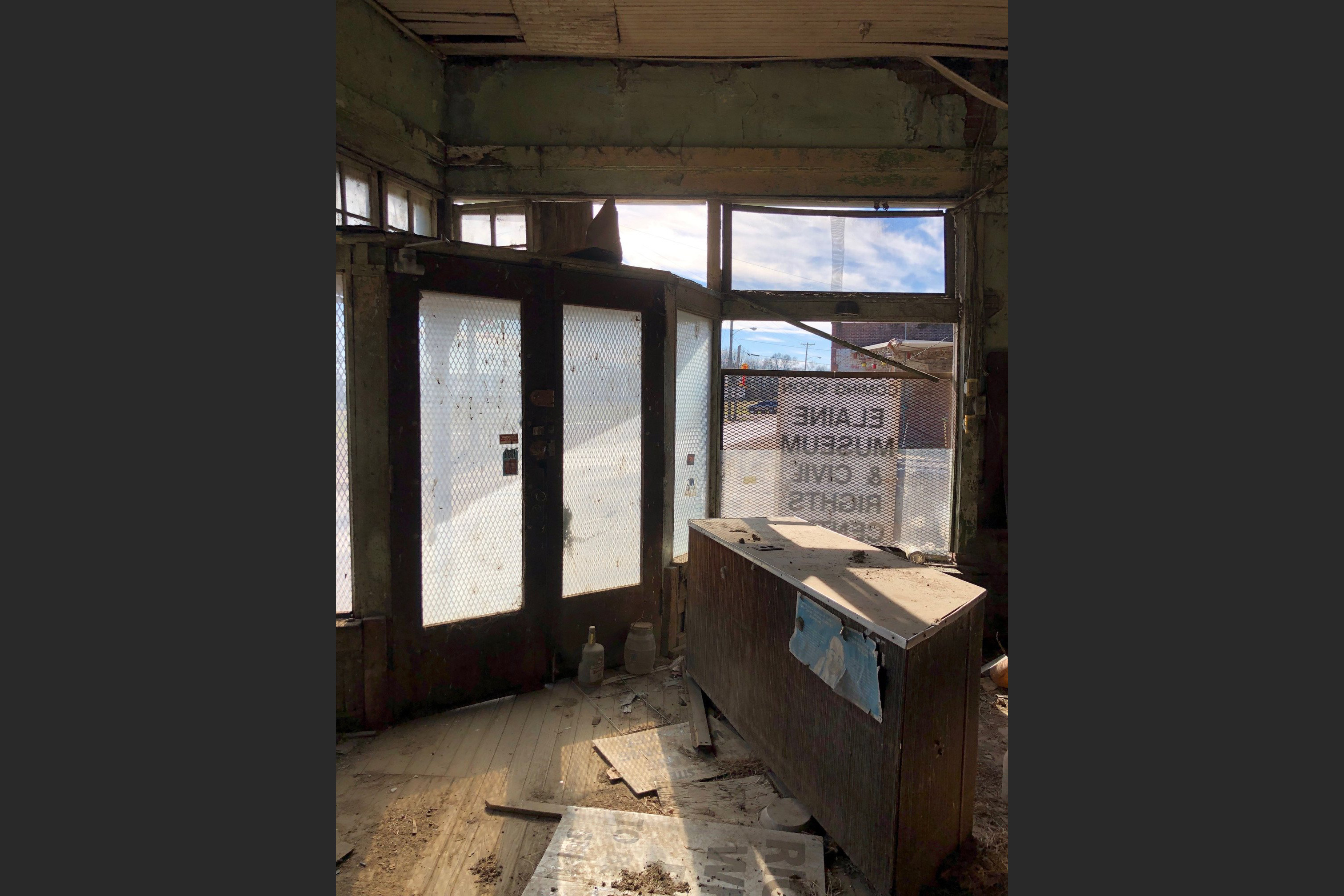 This was the view out the front door of the former Lee Grocery Store in Elaine in mid-January before renovations began about a week later. The building will become the new Elaine Museum and Richard Wright Civil Rights Center. (Arkansas Democrat-Gazette/Sean Clancy)
A big part of the legacy center's work has been collecting oral histories of the massacre and of the area. They will be kept in the new museum.

"The museum will preserve those oral stories that have been handed down from descendants who knew the truth," Marshall says.

There will also be a space dedicated to Richard Wright, the civil rights center's namesake and author whose works include the 1940 novel "Native Son" and the 1945 memoir "Black Boy." Wright, who died Nov. 28, 1960, at the age of 52, spent part of his boyhood living in nearby Helena and with his aunt Maggie and uncle Silas Hoskins in Elaine. Hoskins will also be remembered in the museum.

Hoskins owned a saloon and had been threatened by whites who coveted his business, Wright wrote in "Black Boy." He left home one evening for work and never returned, allegedly gunned down by a white man. Hoskins' wife was not allowed to see his body or claim his assets.

Work on the museum should take five to eight months. It will be dedicated Sept. 30, the 103rd anniversary of the start of the massacre. There will also be burial rites for Hoskins and the 12th annual Healing of the Land ceremony, Olson says.

"I tell my children all the time, one day I'll be sleeping in the clay and you need to learn all you can," Marshall says. "It's good to know your history. That's why we have narratives from descendants, so we can get the truth out there." 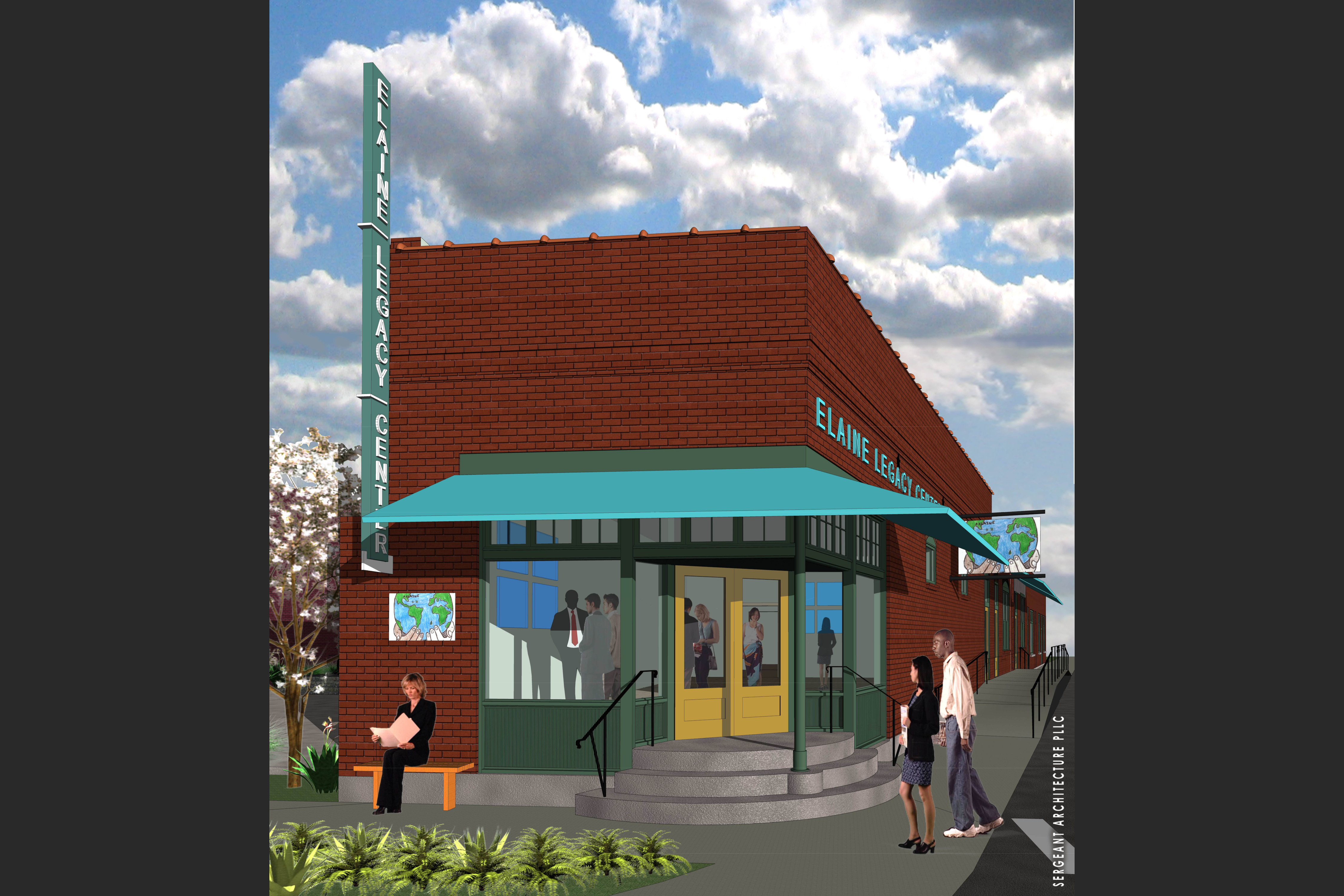 Print Headline: The truth is out there: Historic building in Elaine preserved as museum, Richard Wright Civil Rights Center