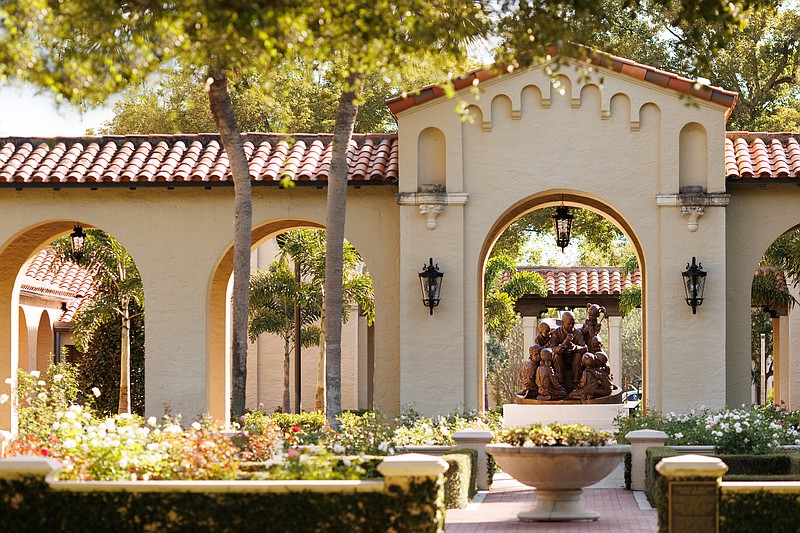 “A Beautiful Day for a Neighbor,” a bronze cast sculpture created by Paul Day, is the latest addition to the “Mister Rogers’ Neighborhood Walking Tour” at Rollins College. (Courtesy of Rollins College/Scott Cook)

The name most often associated with Orlando is, of course, Walt Disney. Few of the annual visitors to the area, which numbered nearly 76 million in 2019, realize that central Florida also has a special connection to a very different kind of children's entertainer: TV pioneer Fred Rogers.

As an undergraduate, the beloved broadcaster attended Rollins College in Winter Park, Fla., an Orlando suburb. On the college's elegant, old-world, Spanish-Mediterranean-style campus, curious visitors — perhaps winding down after a theme-park day — will find many tributes to its best-known alumnus, who graduated in 1951.

The newest of these arrived this fall: a statue by renowned British sculptor Paul Day, whose other works include the imposing Battle of Britain Monument on the Victoria Embankment in London. The statue and four other stops are featured on a self-guided "Mister Rogers' Neighborhood Walking Tour" that highlights his ties to the small liberal arts college.

The campus puts up tour signage each March — in celebration of Mister Rogers' birth month — but because maps can be downloaded online, it's easy to do on your own year-round. I recently did exactly that: Rollins is my alma mater, too, and I was eager to see the new addition to campus.

I headed to Rollins on a late morning in early December. This being Florida, I walked the walk in sunny, 72-degree weather. The new statue is meant to be the tour's grand finale, but I did the 30-minute circuit backward, beginning with the statue, which pulled me in like an approximately 3,000-pound magnet.

"It so pronounces the love that we need in this world today, and the acceptance of Fred's work. This sculpture just picks that up," says John Rogers, Fred's youngest son, who lives in Winter Park.

The statue, which was unveiled in October, sits next to the rose garden, between the Annie Russell Theatre and the Knowles Memorial Chapel, the perfect spot for a tribute to a musician and Presbyterian minister. Called "A Beautiful Day for a Neighbor," Day's larger-than-life bronze cast sculpture depicts Rogers surrounded by kids, talking to them with the help of Daniel Striped Tiger, the first puppet to appear on "Mister Rogers' Neighborhood," which aired nationally from 1968 to 2001.

Day incorporated several special touches into the work. On the bottom of one child's shoe is the number 143, which had special significance to Rogers, because it represents the number of letters in each word of the phrase "I love you." (It was also Rogers's weight, which the 6-foot-tall onetime intramural swimmer sedulously maintained.)

"Paul Day captured him. He captured the whole Fred," says John Sinclair, who holds the John M. Tiedtke Endowed Chair of Music at the college and serves as its director of music. The two musicians became fast friends in the early 1990s, when Rogers had a speaking engagement at the school and Sinclair was asked to make an impromptu introduction.

"When you look at Fred's face, he's teaching, and that's what Fred really did. He was a teacher, a minister, a social worker, a musician. He was the ultimate humanist, and then [Day] captured the theatrics of the show behind him." 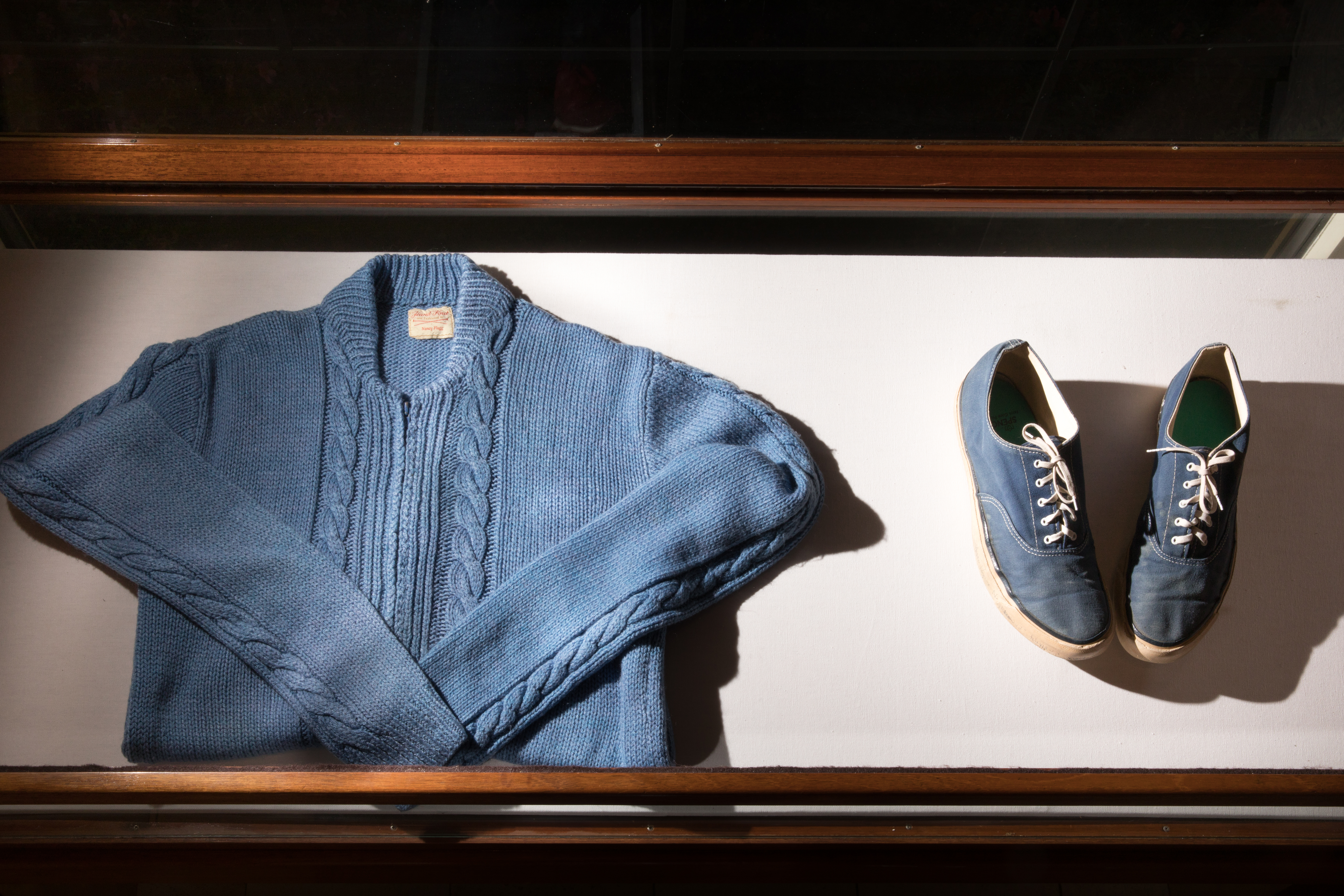 A sweater and a pair of tennis shoes were given to Rollins College by Fred Rogers in 1991 on the occasion of his 40th college reunion. (Courtesy of Rollins College/Scott Cook)
MAKE-BELIEVE MADE REAL

Behind Rogers is a strikingly detailed depiction of the Neighborhood of Make-Believe as well as beloved characters such as Henrietta Pussycat, Lady Elaine Fairchilde and King Friday XIII. I loved him as a child because I was born on Friday the 13th, so I figured we were related. I also loved that he was fancy and dressed up language like you'd dress up a Barbie doll, singing, "Propel, propel, propel your craft," instead of, "Row, row, row your boat." I still love it.

In his sphere, Rogers — like Disney — was an innovator.

"'Mister Rogers' Neighborhood' was one of the first shows to speak directly to the camera," says Rebecca Dore, senior research program director at Ohio State University's Crane Center for Early Childhood. "He would even wait for their response. When TV characters directly address children like that, it can be very engaging, and it might even help children learn."

Rogers taught kids life skills such as empathy and kindness, and that all our feelings, even the bad ones, were important. He talked to children about tough topics such as death and divorce and made powerful statements on his show about racial equality, mental health and disability rights without ever raising his voice or yelling at strangers in all caps.

Friends and family say he was like that all the time. There was no veneer for the camera.

"[The statue] makes us reflect, and that's what the show was about: having children deal with their feelings, their hopes, their fears, the kinds of things he helped children deal with over generations," says Dan Crozier, Rogers' nephew, now a composer and professor of music theory and composition at Rollins.

Music composition was Rogers' major on the college's gorgeous, serene campus, where he also met his future wife, Joanne Byrd. The school was established in 1885, and the Spanish-Mediterranean architecture, shaded by old oaks full of Spanish moss and flanked by palm trees, has an old-Florida feeling more often associated with St. Augustine.

It's present everywhere, including the Tiedtke Concert Hall, my tour's second stop. Here in the Fred Rogers Lobby is a warm, realistic portrait by local artist Don Sondag that depicts Rogers in one of the trademark sweaters he changed into at the start of each show. Truthfully, the concert hall is more of a dress-up venue, but as Mister Rogers taught us to understand about everyone, he's just fine the way he is.

Stop 3 is the middle of the tour and in the middle of the campus, at Mills Lawn. Around the perimeter of this vast green space are 530 stone plaques bearing the names of thinkers such as Maya Angelou and Aristotle, each inset with a stone from a place where they lived. It's a relaxing, shaded place to meditate and be inspired by the works of all these great people, including Mister Rogers, who got to plant his own plaque in the walkway in 1991.

My next-to-last stop is just to the west of the Walk of Fame, down a columned outdoor hallway. It takes some time to find the simple marble plaque, which you might not even notice if no one pointed it out to you. It says "Life is for Service," an idea that so affected a young Fred Rogers that he took a photograph of the plaque and kept it in his wallet for the rest of his life.

The final stop on my reverse tour is in the school's Olin Library. On the occasion of his 40th class reunion in 1991, Rogers donated one of his trademark sweaters, most of which were hand-knit by his mom, and a pair of blue tennis shoes to the school. They are housed in the library's archives most of the year to protect them from light damage; other artifacts, such as photos, personal papers and books, are on display in the library year-round. (Building access is restricted to students through the end of the semester, but all of the items may be seen by appointment.) The signature sweater and sneakers are on public view annually during the month of March.

As my tour drew to a close, I thought about what it would feel like to be here again as a college student, and what kind of feelings Mister Rogers' legacy would inspire.

"I'd think it would just make you feel like you could do anything," I said to Elise Wendelburg, a Rollins student from Atlanta double-majoring in music and communications.

Her answer was more nuanced. "It makes you feel very small, but part of something very big, and being able to contribute to that is very special indeed," she said.

Mister Rogers would be so proud.

Established in 1885, this private liberal arts college has a student body of approximately 3,000 and is situated on an 80-acre suburban campus outside Orlando. Visitors can see artwork and mementos related to its most famous alumnus, Fred Rogers, on a self-guided five-stop walking tour; download a map at rollins.edu/mister-rogers/walking-tour. (During the month of March, the school puts out directional signage to the five tour stops and provides handouts and paper maps.) Free.