The tragedy of 2001 called Austin Booth to become a Marine. Twenty years later, he was called to become director of the Game and Fish Commission by Werner Trieschmann | January 2, 2022 at 2:21 a.m. 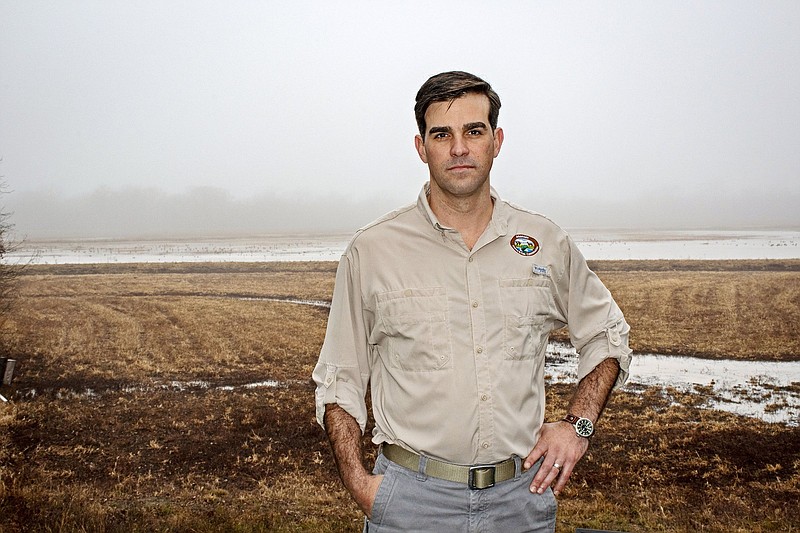 “My vision is of common man and common woman conservation. The land belongs to the people of Arkansas. I want to leave our resources and our lands better than we found them.” -Austin Booth (Arkansas Democrat-Gazette/Cary Jenkins)

A singular day of tragedy was also a day of inspiration.

On Sept. 11, 2001, Austin Booth was a high school student at Little Rock Catholic School for Boys. He was watching TV in class when the second plane hit the World Trade Center. Later, he was being driven by his father to their home in Scott, which meant they would drive past then-Little Rock National Airport, Adams Field. Booth has never forgotten what he saw there.

"There were probably 30 jets just parked on the runway," Booth recalls. "The sun was setting. It was a very eerie sight."

The horrible events of that September day pushed Booth in a distinct direction.

"Nobody knew where we were headed [after Sept. 11th]," Booth says. "It never left me and I felt called to serve. If somebody was to lead others, then why not me. Have I not benefited enough?"

Booth answered the call and would eventually become a Marine captain who would do his duty in Afghanistan. Today, Booth is serving in a different capacity but still for a greater good. In May Booth was voted in as director of the Arkansas Game and Fish Commission, making him only the 19th director in the agency's 106-year history.

Gov. Asa Hutchinson joined the chorus of praise for Booth.

"[He] has served the state with excellence and professionalism in a number of roles, and it is exciting to see those same leadership skills in service as the new director of the Arkansas Game and Fish Commission."

The Game and Fish Commission did not see Booth's relatively young age -- he was 34 at the time he was named director -- as a negative. In fact, it was the opposite.

"His is a new style of leadership," Doramus says. "He is one of the youngest directors hired [to run Game and Fish]. We are trying to relate what we do to a younger generation. He's already had very successful public meetings."

"At the end of the day, we are the keeper of the resources," Booth says. "My vision is of common man and common woman conservation. The land belongs to the people of Arkansas. I want to leave our resources and our lands better than we found them."

Booth is the oldest of the three siblings in his family. He says his growing up was dominated by the outdoors. The closest neighbor in the small town of Scott was a mile away. Circumstances came together so that practically every waking hour of Booth's early years was spent outside.

"We did not have cable TV until I was in high school," Booth says. "We lived right across from the lake. There was a pecan orchard on one side and a cotton field behind our house. There was always things to get into. We could fish anytime we wanted. I just loved growing up in Scott."

Booth's father started out working in engine repair and would later run North Little Rock's Riverside Marine. Booth's mother stayed at home to raise children but would go on to school to become a nurse after they were out of the house.

"I was in law school when my mom was in college," Booth says.

Their father having to work through the busy spring and summer seasons meant the family didn't really get to take the traditional week-long vacations. However, the Booths spent every summer in a house on Lake Ouachita.

"We were there every single weekend during the summer," Booth says. "We spent all our time on boats and fishing."

While fishing was a main preoccupation for Booth when he was young, he also played basketball and "loved it even though my dad was my coach in grade school."

Calling himself a "voracious reader," Booth says he gravitated toward English and literature in school. He attended private schools in Little Rock and found a home instantly when he was a freshman at Catholic High School.

"You could tell it was home from the minute you walk through the door at Catholic," Booth says. "It just has all the ingredients that make a young boy come alive -- except for girls of course. It's the tradition and also the weight of high expectations and the fraternal solidarity. I call it the best place on Earth. I get emotional talking about it."

Catholic didn't take it easy on Booth and his fellow students. Even so, that didn't drive Booth away.

"Those teachers care so much about the institution. When I was sick, I would fake being well because I wanted to go to school."

Booth was motivated to do well at Catholic as he had his sights set on becoming a Marine officer.

"I believed the best way to do that was through the Naval Academy," Booth says. "I worked hard to make good grades, test well, excel in sports, and serve my community. Sen. [Blanche] Lincoln was one of our U.S. senators at the time, and I went through the nomination process with her office."

The Citadel resides in Charleston, S.C., and is a public senior military academy. Anybody who is accepted to The Citadel can expect four years of living on campus, residing in military-style barracks and rigorous military training. Every cadet at The Citadel also participates in ROTC.

Though most of the cadets at The Citadel end up going straight into one of the branches of the military after graduating, it is not mandatory. Booth admits his idea of becoming a Marine changed -- momentarily -- while he was there.

He says part of that decision happened after "I met Kristen, who is now my wife. She was uninterested in military life."

For Booth, the attraction to Kristen was practically instantaneous. A victory by The Citadel football team meant that the cadets could get some rare time off campus. Booth chose to drive to see Kristen and, the next day, told his mother that he "was finished dating."

"What got me was she was very attractive and confident," Booth says. "I could tell the most important thing to her was her faith and that was completely foreign to me but it was what made me interested."

Booth's next stop was law school at the University of South Carolina.

"I had always been a big reader," Booth says. "Reading was certainly something law school required. [Law school] was difficult but I had no problem putting in the work. I did end up in the top one-third of my class."

The next significant change in Booth's life would come after going to a Marine Corps recruiting event at his law school. Booth remembers being the only one in attendance who raised his hand when asked if interested in serving the United States as a lawyer in Afghanistan.

Booth says "after many conversations with my wife" he signed on the dotted line and started the process of becoming a Marine.

"It was something that was a lifelong dream," Booth says.

Wearing a uniform was a way for Booth to repay what he knew was given to him.

"I grew up in a family where my parents always made sure we understood that America is an incredible place and countries all over are not like this place," Booth says. "The miracle of the founding of the U.S. was constantly explained to us. That was always on my mind."

AN ARKANSAN IN AFGHANISTAN

In 2015 Booth was deployed to Afghanistan and was stationed in Kabul. He worked as an operational law attorney, speaking to commanders on military law.

"I was based in Kabul but I got to travel all over the country," Booth says. "It was an immense privilege to serve there. Combat displays with the loudest possible volume what we are capable of -- in the best of ways and the worst of ways. But in August of this year, when the country and Kabul was melting for the world to see, all I wanted to do was go back. I wanted to go back so badly it hurt."

The suffering Booth saw firsthand in Afghanistan can't be easily explained or forgotten.

"One of the more difficult aspects of the country to wrestle with is that Afghanistan has so much potential to be a flourishing nation. With respect to the people, they, in my recollection, are marked by unrest in every single aspect of their lives -- extreme poverty, affliction and despair. I very often still see the young girls there when I hold my own daughters."

"It's a fantastic program for a Marine," Booth says. "You got to see how defense appropriations work. It was great experience for me."

Returning home to Arkansas looked like it might not be in the cards for Booth, who was now helping to oversee a growing family of three kids. The Arkansas Department of Veterans Affairs brought Booth back to Central Arkansas to be chief of staff and chief financial officer. Then the Arkansas Game and Fish Commission came calling.

Just like he did when he was growing up in Scott, Booth is spending a lot of time outdoors. He is happy to be out and not always planning for the future behind a desk.

"Last week we were out in Beaver Lake, putting cedar trees in the water. I helped. I am having an absolute blast. A lot of people express sympathy for me and say I must be drinking from a fire hose with this new job. I look at the caliber of staff I have and I am optimistic for the future. When we have meetings and video conferences, I sign off by saying, 'See you in the field.' I know that's where the real work gets done."

• A HABIT I HAVE THAT HAS SERVED ME WELL THROUGH THE YEARS: Being an early riser with what is essentially a Rube Goldberg system of alarm clocks.

• MY FAVORITE MEAL MUST INCLUDE: Ribeye with a side of fried catfish -- or maybe vice versa.

• WHAT I WANT PEOPLE TO KNOW ABOUT THE GAME AND FISH COMMISSION: We are at a major inflection point, and we are committed, more than ever, to Arkansans, expanding public access, and stewarding habitat.

• I CAN'T START MY DAY WITHOUT: Strong coffee and prayer.

• MY FOUR GUESTS AT MY FANTASY DINNER PARTY: My wife, George Washington, the Apostle Paul, and Frederick Douglass.

• THE WAY I RELAX: Drinking deeply of the Arkansas outdoors.

• ONE WORD TO SUM ME UP: Purposed 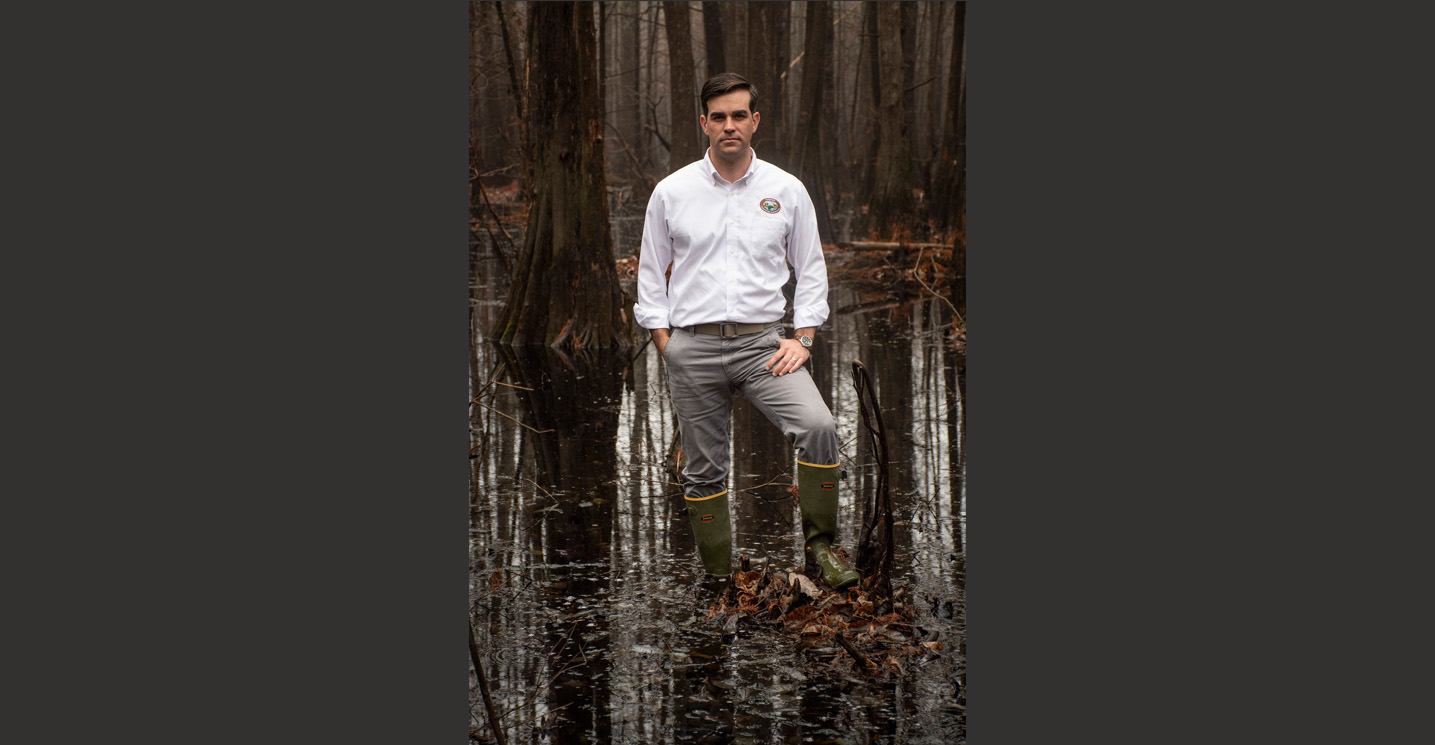 “I grew up in a family where my parents always made sure we understood that America is an incredible place and countries all over are not like this place. The miracle of the founding of the U.S. was constantly explained to us. That was always on my mind.” -Austin Booth (Arkansas Democrat-Gazette/Cary Jenkins)