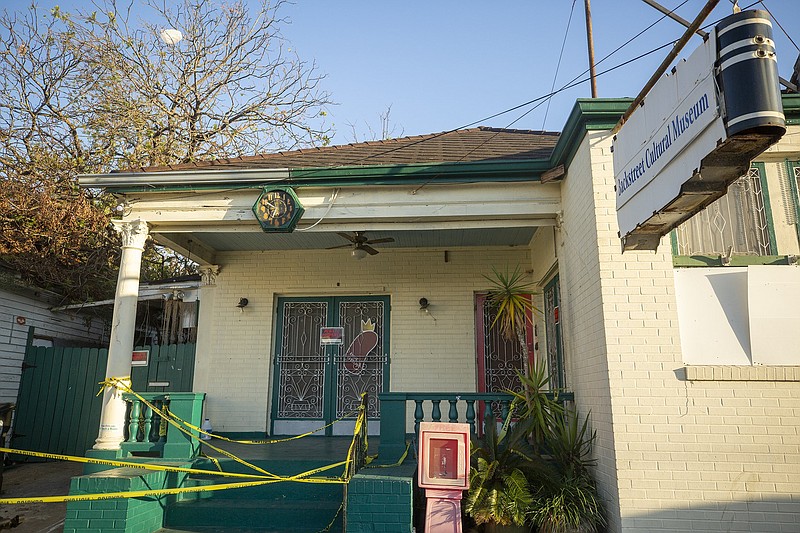 Over a span of nearly a year and a half, the Backstreet Cultural Museum has lost its founder, a number of its contributing artists and performers … and its building. (The New York Times/L. Kasimu Harris)

One was filled entirely with elaborate beaded and feathered suits that debuted on Mardi Gras mornings and were designed by makers known as "Mardi Gras Indians" or "Black Masking Indians." The other featured solemn photographs of jazz funerals and memorial T-shirts, displayed in a handmade wooden case, that honored lives lost to gunfire. A rudimentary stand held a red tuba played by Anthony "Tuba Fats" Lacen, a jazz musician who traveled the world performing but played for tips in the French Quarter anytime he was home.

But over the past 16 months, the museum has suffered cataclysmic losses. In late August 2020, Sylvester Francis, its founder, fix-it man and visionary, died of appendicitis at 73. The following months saw a string of venerable artists and performers whose work was featured in the museum die of covid-19. And then, a year after Francis' death, winds from Hurricane Ida uprooted three immense pecan trees that crushed the back roof of the museum's rented home, the former Blandin Funeral Home in the city's Treme neighborhood.

Francis' daughter, Dominique Francis-Dilling, who had taken over the museum as director after her father's death, decided to leave the building immediately. She feared that moisture and mold would quickly destroy the collection's ephemera, much of it made of delicate cloth, paper and feathers. A group of volunteers packed the collection into plastic bags and Bubble Wrap and loaded it onto U-Haul trucks bound for climate-controlled units in a storage space across town.

Four months later, the collection remains in storage, while the museum's dark-green front steps are roped off by yellow caution tape, with "No Trespassing" signs hung on the building's front double doors. Francis-Dilling is working to raise money to sign a yearlong lease on a new space nearby, but the process is slow going.

Beyond the museum's own travails, its near-death experience reflects the acute pressures on Black institutions in a city badly battered by repeated hurricanes and the pandemic at a time when gentrification, especially in Black neighborhoods less prone to flooding, is rapidly driving up prices for the very people the institutions were created to serve.

"I feel so sick in my heart to see the Backstreet dark. Because everything around it feels like Disneyland," said James Andrews, a trumpeter and Treme native.

In the Treme, a stronghold of free people of color before the Civil War and a bastion of the city's Black culture ever since, Hurricane Katrina supercharged a pattern of displacement that has rapidly shifted the demographics of the neighborhood to nearly half white.

Across the city after Katrina, prices rose the fastest in what's called the "sliver by the river" — higher-ground neighborhoods that endured less flooding during the storm. In the Treme, a 20-block area adjacent to the French Quarter, Black families who had rented in the neighborhood for generations were replaced by white tenants paying twice as much. Rows of historic houses were freshly painted — but often used as short-term rentals or filled with newcomers.

As many Black-owned businesses and nightclubs in the neighborhood were shuttered, Backstreet endured as one of the last touchstones of old Treme for those who remained.

Francis had been determined to hold on. "This is my dream," he would often say. "This is nobody's dream but Sylvester's."

He started his collection in the 1970s in a two-car garage in his native Seventh Ward, then moved part of it into the lobby of a carwash he ran. Along the way, he became known as a one-man custodian of the city's Black culture, and his collection grew as a community archive for items that neighbors wanted preserved.

It included photos and videotapes of parades dating back decades and cherished suits of members of local social aid and pleasure clubs — offshoots of old Black benevolent societies — who dress up and host four-hour Sunday afternoon parades through the city's Black communities.

Finally, in 1999, his friend Joan Rhodes suggested that Francis rent her family's former funeral home on Henriette Delille Street in nearby Treme.

As the neighborhood changed around him, Francis remained a constant. On any given day, he might have worked on repainting a wall, fixing a pipe or using a feather duster to keep his exhibits looking sharp. But if visitors arrived, he would quickly climb down from his ladder, brush off his clothes — typically, a baseball cap, a patterned shirt and slightly baggy trousers — and show them around. Despite the size of the place, his tours were not brief. They were encyclopedic, stem-winding explorations of his life's passion: the city's rich Black culture.

It was not just an archive, but a living assemblage of the rituals and life cycles of a changing community.

MORE THAN A SHOWPLACE

Museumgoers coming to see the collection would often be greeted by those with work inside, who would sit on the front steps on their days off, socializing. Sometimes, the collection might lose a beaded suit for a day when the chief who created it reclaimed the suit temporarily for a big gig.

Brass band musicians with generations of family history inside would stop through on their way to gigs. And people who grew up in the Treme would routinely drive down that block of Henriette Delille Street to see Francis, who often passed along messages from friend to friend.

"This is where our culture is from. It belongs here. I want the world to see it. But the world needs to come here to see it," said Victor Harris, who holds the title of big chief of the group Spirit of FiYiYi. His peacock-blue, beaded and feathered suit became the first item in the Backstreet's collection when Francis salvaged it after Mardi Gras 40 years ago.

Harris has since had an entire show devoted to his artwork at the New Orleans Museum of Art. But he said that recognition pales in comparison to the Backstreet. "If my suit was in the Smithsonian, it wouldn't mean as much to me as being in the Backstreet," he said. "That was our community headquarters."

The collection might have been Francis' dream, but many people felt a sense of ownership, said Jonn Hankins, a longtime local arts curator. "They know that collection in a way that a family knows their sons and their daughters," he said.

When Francis died, Francis-Dilling heeded his instructions. First, she arranged a massive jazz funeral in his honor. Then, she stepped in at the museum, giving tours filled with the narratives that she had heard growing up. "He could put his hand on every single thing in here and tell a story," she said. "He lived it. I learned it."

Now, with the museum displaced, she feels the urgency of reopening swiftly to preserve her father's legacy.

Remaining in the Treme is crucial, she said, both to maintain foot traffic from tourists and to fulfill her father's dream of maintaining the deep culture of the neighborhood.

Other community members have leaped into action, too.

Jeremy Stevenson, a big chief of the Monogram Hunters tribe who lives two doors down from Backstreet's old building, began working side by side with Francis-Dilling, much as other chiefs had done for her father, to computerize handwritten stacks of Francis' spiral-bound notebooks cataloging the collection.

A few blocks away from the Backstreet's darkened building, Gia Hamilton, a New Orleans native and executive director of the neighboring New Orleans African American Museum, heard the news and began exploring options. While a few larger cultural entities have offered to buy part of the collection from Francis-Dilling, Hamilton rejects what she calls a "colonizing" tradition of museum collection, preferring to keep an independent vision of "whose collection it is and where it comes from."

Not long before Christmas, Hamilton offered the Backstreet a yearlong lease on a back house on the African American Museum's campus. While Francis-Dilling is still trying to raise money to make the deal possible, she is hoping to reopen in the new space early this year.

"I just want to make my father proud," she said quietly. "That's all we talked about, is keeping the museum going."