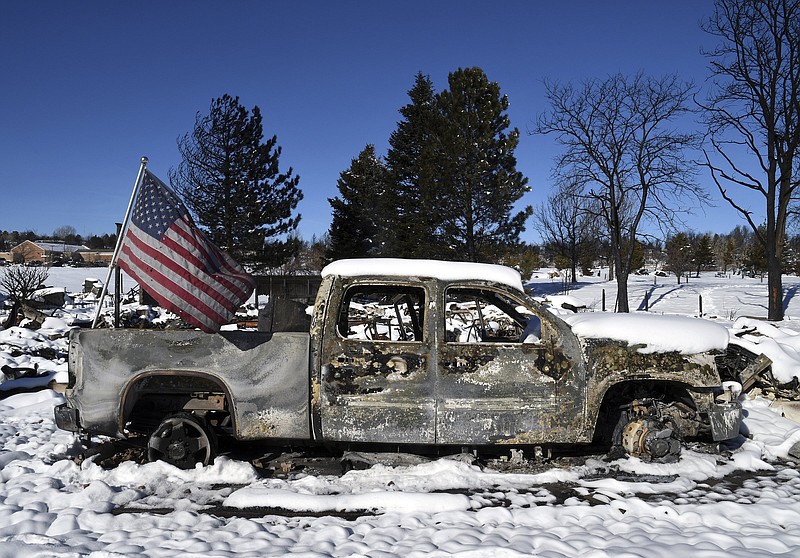 A burned truck in a destroyed neighborhood in Louisville, Colo., on Sunday, Jan. 2, 2022. Search teams looked for two missing people on Sunday in the snow-covered but still smoldering debris from a massive Colorado wildfire, while people who barely escaped the flames sorted through what was left after the blaze and investigators tried to determine its cause. (AP Photo/Thomas Peipert)

LOUISVILLE, Colo. -- Search teams were still looking for two people Sunday in the snow-covered but still smoldering debris from a Colorado wildfire, while people who barely escaped the flames sorted through what was left after the blaze and investigators tried to determine its cause.

The flames ripped through at least 9.4 square miles and left nearly 1,000 homes and other buildings destroyed in suburbs between Denver and Boulder.

While homes that burned to the foundations were still smoldering in some places, the blaze was no longer considered an immediate threat -- especially with Saturday's snow and frigid temperatures.

Authorities initially said everyone was accounted for after the fire. But Boulder County spokesperson Jennifer Churchill said the reports of three people missing were later discovered amid the scramble to manage the emergency. One was found alive, officials said Sunday.

Crews were still looking for a woman at a home in Superior and a man living near Marshall. Boulder County Sheriff Joe Pelle said their homes were "deep in hot debris and covered with snow. It is a difficult task."

Other investigators were seeing if the missing people might have made it out, but not contacted their families or friends, Pelle said.

"I know this is a hard time in your life if you've lost everything or you don't even know what you lost," Polis said after the tour. "A few days ago, you were celebrating Christmas at home and hanging your stockings and now home and hearth have been destroyed."

The cause of the fire is still under investigation. Utility officials found no downed power lines around where the fire broke out.

Pelle said Saturday authorities were pursuing a number of tips and had executed a search warrant at "one particular location." The sheriff refused to give details again Sunday, including whether he thought the fire was set.

Of at least 991 buildings destroyed by the fire, most were homes. But the blaze also burned through eight businesses at a shopping center in Louisville. In neighboring Superior, 12 businesses were damaged.

Utility crews expected to restore electricity to the homes still standing Sunday, but warned gas service might take longer to get back.

People lined up to get donated space heaters, bottled water and blankets at Red Cross shelters. Xcel Energy urged other residents to use fireplaces and wood stoves to stay warm and keep their pipes at home from freezing.

The winter grassland fire that blew up along Colorado's Front Range was rare, experts say, but similar events will be more common in the coming years as climate change warms the planet -- sucking the moisture out of plants -- suburbs grow in fire-prone areas and people continue to spark destructive blazes.

"These fires are different from most of the fires we've been seeing across the West, in the sense that they're grass fires and they're occurring in the winter," said Jonathan Overpeck, a professor in the School for Environment and Sustainability at the University of Michigan. "Ultimately, things are going to continue to get worse unless we stop climate change."

Flames swept over drought-stricken grassy fields and neighborhoods northwest of Denver on Thursday with alarming speed, propelled by guests up to 105 mph. Experts say its clear what allowed it to spread so fast.

"With any snow on the ground, this absolutely would not have happened in the way that it did," said Keith Musselman, a snow hydrologist in Boulder. "It was really the grass and the dry landscape that allowed this fire to jump long distances in a short period of time."

Three ingredients were needed to start this fire -- fuels, a warm climate and an ignition source, said Jennifer Balch, a fire scientist with the University of Colorado, Boulder. "And then you add a fourth ingredient, wind, and that's when it became a disaster."

Temperatures in Colorado between June and December were the warmest on record, Balch said. The grasses grew thick because they had a wet spring, but saw no moisture until snow flurries arrived Friday night.

Balch said Colorado is a dry landscape filled with flammable material for much of the year -- "and those chunks of time are getting longer with climate change."

The lesson learned throughout this event is that the "wildland-urban interface is way bigger than we thought it was," Balch said.

That means a wider area is under threat of wildfire. That border area -- where structures built by people meet undeveloped wildland prone to fire -- has always been the foothills, she said.

Firefighters in Boulder consider the interface west of Broadway -- a busy road that passes through the center of town. But Thursday's fire sparked east of that line, next to thousands of houses that have sprouted up on the east side of the Rockies since the 1990s, Balch said.

"There were stretches between Denver and Fort Collins that had no development, but now it's just like one long continuous development track," Balch said. "And those homes are built with materials that are very flammable -- wood siding, asphalt roofing.

"We need to completely rethink how we're building homes."

The other important change is understanding how these fires start in the first place, she said.

"There's no natural source of ignition at this time of year. There's no lightning," she said. "It's either going to be infrastructure-related or it's going to be human caused."

Over the last two decades, 97% of wildfires were started by people, according to a recent study by the Cooperative Institute for Research in Environmental Sciences at the University of Colorado, Boulder.

Causes have ranged from accidents at construction sites, to a car with a hot tailpipe, to tossed cigarettes.

"I like to say, we need Smokey Bear in the suburbs," she said. "We need to be thinking about how our daily activities can contribute ignitions or sparks that start wildfires."

Information for this article was contributed by Thomas Peipert, Brittany Peterson, Eugene Garcia and Martha Bellisle of The Associated Press.