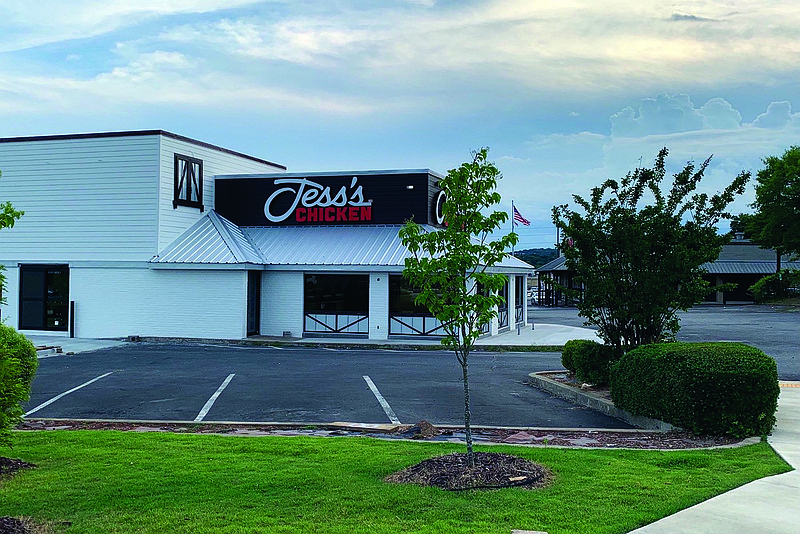 There may have been some expectations, this time last year, that at least at some point during 2021, we’d emerge from the pandemic; that dining out would return to something close to what it had been in, say, 2019, and that God would be in his culinary heaven and all would be right with the world.

A lot of restaurants that had shut their doors to dine-in traffic, either to offer takeout or drive-thru or contact-free delivery only, did reopen to diners. Many places that reopened then closed for periods, some extended, because their staffs came down with, or were exposed to, covid-19. Many did not reopen at all.

Mask requirements came and went; a few places, including Trio’s and 42 bar & table at the Clinton Presidential Center, have been requiring patrons to provide proof of covid vaccination.

Be that as it may, here’s our annual restaurant-business roundup, compiled from a year’s worth of Restaurant Transitions columns. As happens every year, some restaurant news that some might consider significant did not make the final cut. We stress again that inclusion in this roundup expresses neither endorsement nor condemnation of any kind. And bon appetit to all for 2022.

We followed the continuing saga of Restaurant Bar Mar y Tierra, 1900 W. Third St., Little Rock, through the year, while target opening after target opening missed targets. In late summer, just as it was apparently on the cusp of finally opening its doors, and despite a frieze of flashing lights that still illuminate the roof line at night, all other activity in the building apparently ceased. The gentleman who was to manage the restaurant quit, saying there was chaos at the ownership level. In early December, though, we at long last spotted some signs of life, including vehicles parked outside on several occasions.

In February, we learned what would be going into the restaurant building at 10907 N. Rodney Parham Road, Little Rock, from which Black Angus had been forced to decamp early in 2020: Jess’s Chicken, a project from the Bubbus family, which brings you David’s Burgers. The menu will feature fried chicken, nuggets, chicken salad and chicken sandwiches, plus hand-cut fries — a big hit at David’s Burgers — and it’s expected to have a three-lane drive-thru. Latest word on opening, after several construction-related delays, is sometime early in 2022. 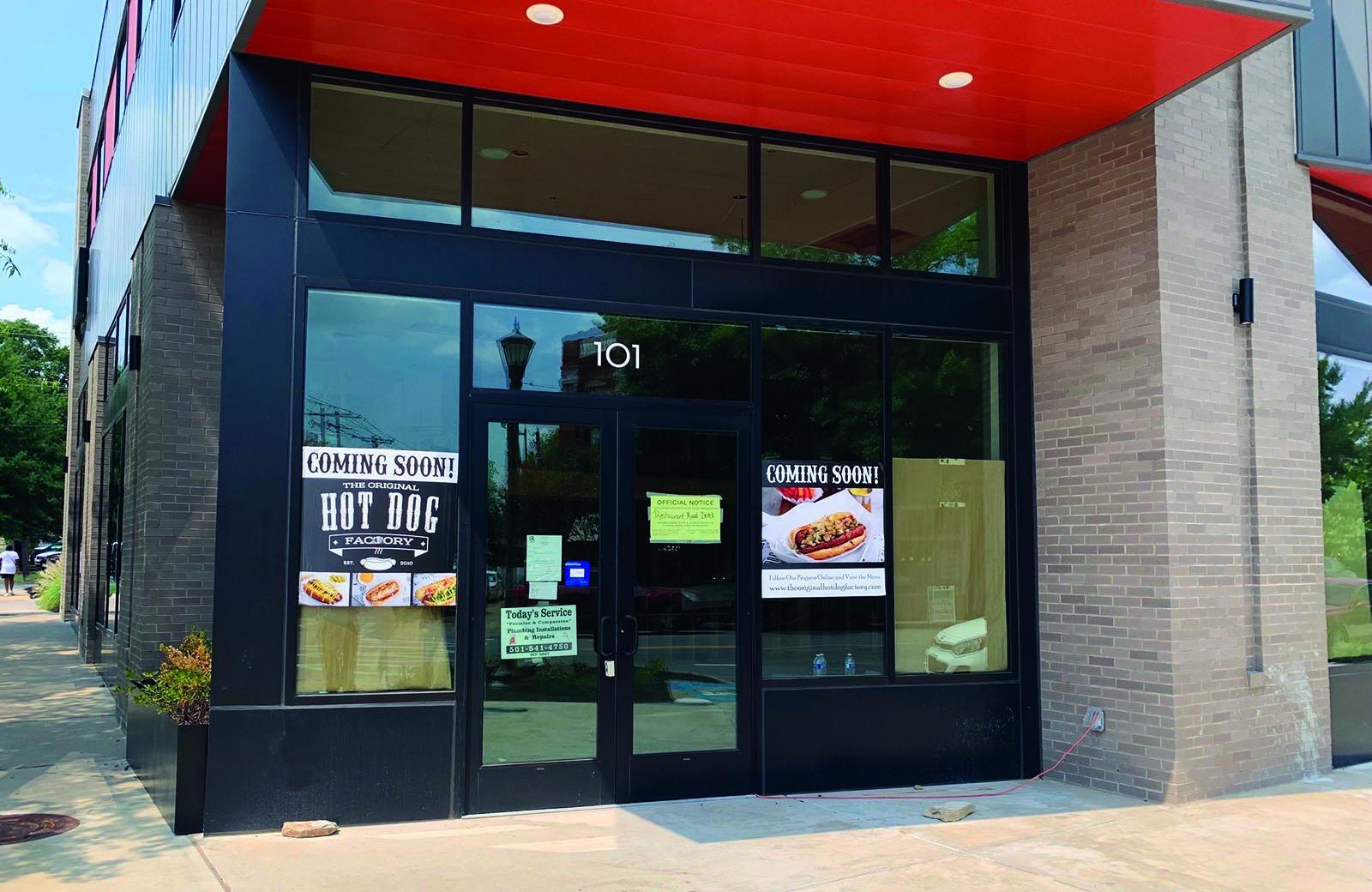 The Capital Hotel, 111 W. Markham St., Little Rock, replaced internationally acclaimed executive chef Joel Antunes, who “retired” in mid-January 2020, in July with Brad Izzard, who at one time had served as Antunes’ chef de cuisine at One Eleven at the Capital. Hotel general manager Terry Bechtold says Izzard spent most of the time the hotel was closed during the pandemic working at a country club in Oklahoma. One Eleven has yet to fully reopen, mostly for just breakfast and special occasions through the end of 2021, but Izzard has put a few of his own touches on the menus at the hotel’s “second” eatery, Capital Bar and Grill.

We confirmed in August that Homer’s West would be taking over the former Franke’s Cafeteria in the Market Place Shopping Center, 11121 N. Rodney Parham Road, Little Rock, which closed March 23, supposedly temporarily due to the covid-19 outbreak; a for-lease sign in July signaled the closure was permanent. Homer’s West owners David and Mandy Connell signed a lease in July on part of the space — the portion at the end cap of that half of the shopping center that faces Rodney Parham Road — with plans to open Homer’s Kitchen Table with a broader menu, including more homemade desserts and more elaborate dinner specials, and with a takeout window. They missed an end-of-year target, citing construction delays, but are now looking to open sometime in February. (The space Homer’s West isn’t taking over, the part facing Market Street, will be a fitness center, to be called Breakout Bar.)

Arkansas’ first Waldo’s Chicken & Beer outlet is now nearing completion in the former Johnny Carino’s, 4221 Warden Road (that’s the service road that runs north to south along U.S. 67/167, “behind” McCain Mall). The Keet family’s JTJ Restaurants is gearing up to eventually open as many as 20 outlets in Arkansas and Oklahoma in a partnership with Nashville, Tenn.-based Fresh Hospitality, from which the Keets also franchise their eight Arkansas Taziki’s Mediterranean Cafe restaurants. Waldo’s chief features are fried and rotisserie-roasted chicken with house-made sauces and sides, and as many as 12-16 beers on tap, some of which will be local craft brews. The original target to open was sometime in June.

That’s not all the Keets, who also own and operate Petit & Keet in west Little Rock and Cypress Social on the North Little Rock side of Maumelle, were up to this past year. In June they announced a partnership with Walt Todd and Kelly Lovell, co-owners of Count Porkula BBQ, which operates in The Rail Yard, 1212 E. Sixth St. in Little Rock’s East Village, to open a second location of Count Porkula in early 2022 at 201 Keightley Drive in Little Rock’s Pulaski Heights. That’s the site of what had been the Ozark Country Restaurant, which permanently closed following a 2018 fire. And in September the partners announced that Count Porkula would be taking over the space most recently occupied by The Hangout Grill & Bar, 10840 Maumelle Blvd., North Little Rock (just around the corner from Cypress Social), which closed July 31. 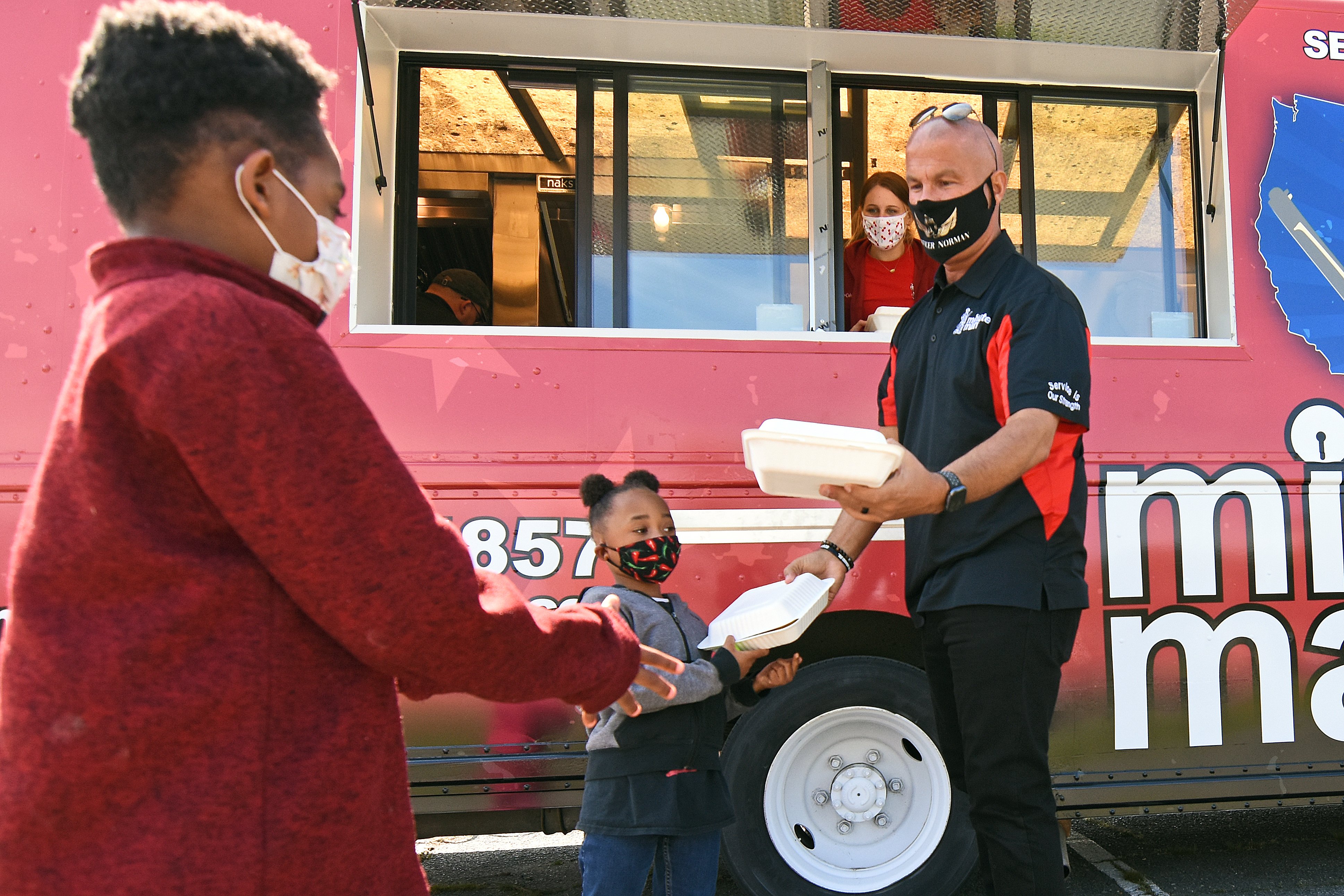 North Little Rock Police Officer Tommy Norman hands out meals at the Minute Man food truck. (Democrat-Gazette file photo/Staci Vandagriff)
Staci R Vandagriff   Minute Man, which delighted fans of both wood-smoked burgers and nostalgia by reopening a brick-and-mortar location in Jacksonville in 2020, went mobile in January, the first of what is now three food trucks making its debut on a commercial lot at West Fourth Street and Broadway billed as the site of Wes Hall’s original Minute Man. In March came word that Minute Man CEO Perry Smith had acquired the Space Shuttle Cafe, 39 feet long, 8 feet wide and 11 feet tall, built out of the fuselage of a DC-3 that saw service during World War II. (Folks who attended the downtown Food Truck Festival in October got to experience it first-hand.) 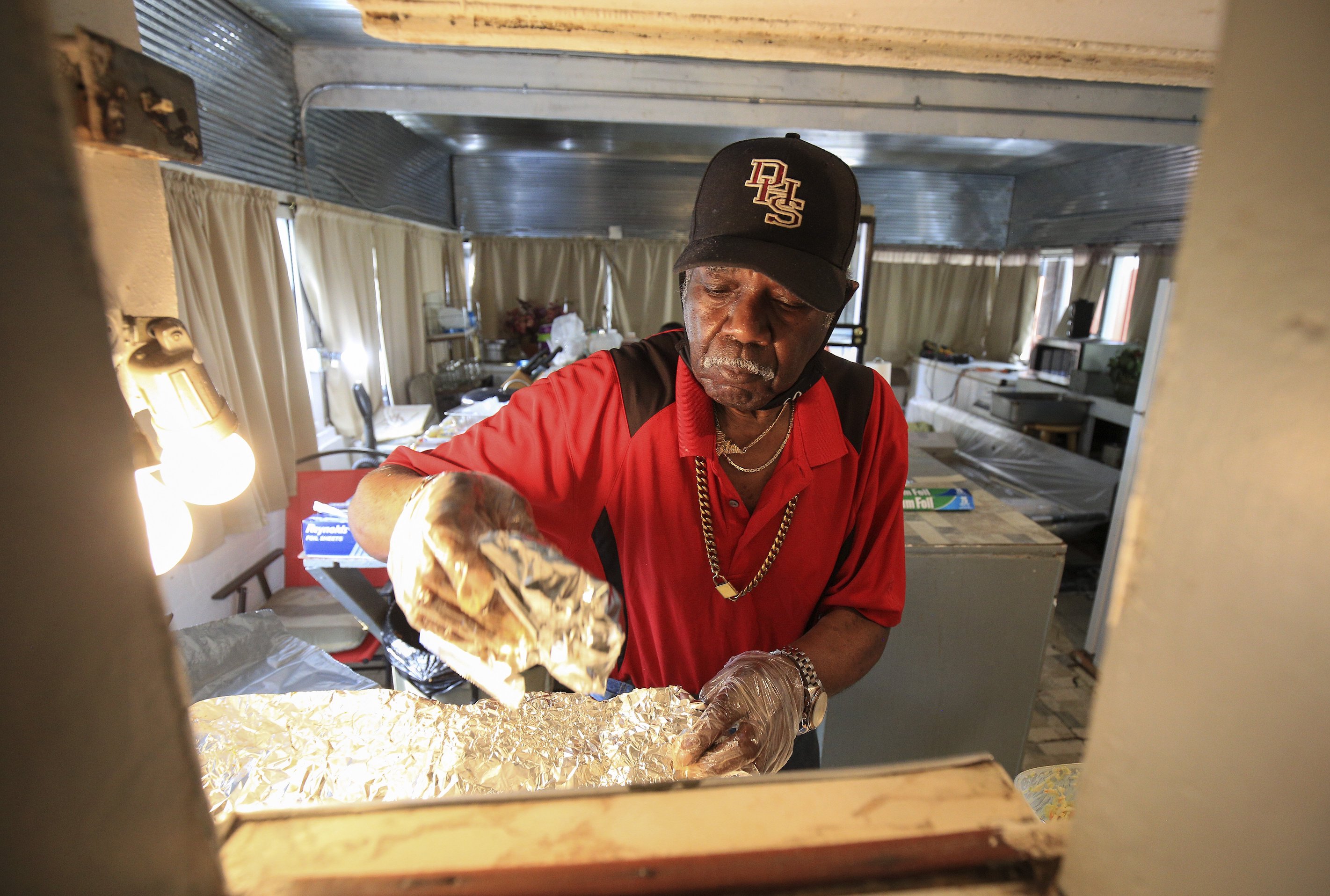 James "Harold" Jones hands a barbecue pork sandwich through the window at his legendary Jones Bar-B-Que Diner in Marianna after reopening in May following a February fire that destroyed his pit area. (Democrat-Gazette file photo/Staton Breidenthal)
Staton Breidenthal   And Jones Bar-B-Que Diner in Marianna reopened May 20, bouncing back from a Feb. 28 fire that damaged the pit area, with the help of thousands of dollars that fans raised via GoFundMe from as far away as Australia and an emergency grant from Southern Restaurants for Racial Justice. The legendary restaurant, winner of a James Beard Foundation America’s Classic award, now has a new metal building around the barbecue pit, and owner-pitmaster-legend James “Harold” Jones, 76, is still serving up pulled-pork sandwiches on white bread until the food runs out each day, often well before noon.

Becky Mobly, owner of Ciao Italian Restaurant, 405 W. Seventh St., Little Rock, said “ciao” to her customers in a final Facebook post right as 2021 began. Mobly, who took Ciao over in 2004 after working there for a little over a year, may have been aware of the fate of the building, which was demolished later in the year to make way for a Chick-fil-A drive thru (see “Wrapped Up in Chains” below).

Bone’s Chophouse, after announcing it would be changing its name to JB ChopHouse — both locations, the original at 3920 Central Ave., Hot Springs, and the restaurant that moved into the former location of Arthur’s, 27 Rahling Circle, Little Rock — then announced in September that the Little Rock restaurant was “temporarily closing [its] doors and going through a restructuring phase.” In October a for-lease sign showed that the closure was permanent. A week or so after that, we reported that the Denver-based Sullivan’s Steakhouse chain would be opening its first Arkansas location in “early 2022” — perhaps April or May — at The Promenade at Chenal, 17707 Chenal Parkway, Little Rock, in the free-standing steakhouse space that has been vacant since the June 2018 closure of Del Frisco’s Grille. 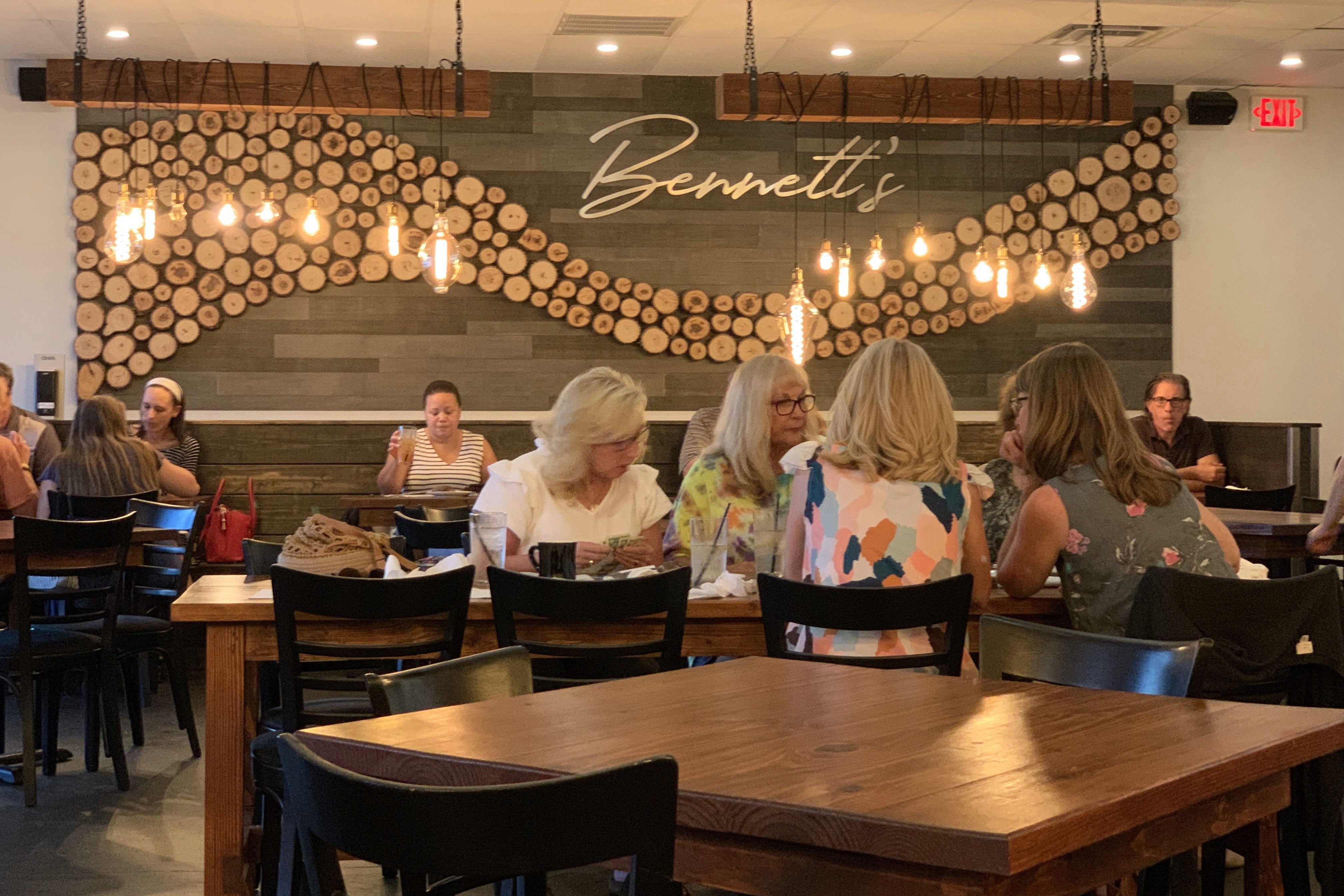 And Blue Heaven, 15228 Interstate 30 North, Benton, opened in May in what for the longest time was Ed & Kay’s.

Three Fold Noodles & Dumpling Co., 611 S Main St., Little Rock, announced in January that owner Lisa Zhang had bought the former Pinnacle Valley Restaurant, 8501 Pinnacle Valley Road, Little Rock, initially intending it as a Three Fold prep facility. Meanwhile, Three Fold Mobile, a food truck, was helping sustain the business at 1509 Rebsamen Park Drive in Little Rock’s Riverdale, where Zhang had originally planned to build a prep facility/second restaurant. Then in May came word that Three Fold had taken over the former Panera Bread space in the Pleasant Ridge Shopping Center, 11525 Cantrell Road, with plans to open a second restaurant there in late fall or early winter. Construction delays have forced a shift in the target opening of “Three Fold West” to February.

We reported in March that Thai restaurant kBird’s owner-chef Richard Glasgow was restructuring the business model for the restaurant at 600 N. Tyler St. in Little Rock’s Hillcrest, to create an in-advance, less hectic ordering system and family-style, multiple-dish meals. He posted on Facebook in October that the restaurant is “going on indefinite hiatus, effective immediately. … This is not a ‘goodbye,’ rather a ‘see you later.’”

Chi Restaurant Group, which had been planning to put a second location of Lulu’s Seafood Kitchen into the former La Madeleine Country Fresh Cafe, 12210 W. Markham St., Little Rock, has changed course and now will be instituting instead a whole new fast-casual concept: Chi’s Baohouse, with a target to open in February or March, depending, says managing member Jacob Chi, “on what it takes to get equipment in.” It’ll offer all-day dim sum, a selection of signature Taiwanese baos (lotus-leaf-based buns surrounding meat, bean paste and other fillings), a handful of Asian noodle soups and a range of boba teas.

And although we didn’t find out about it until May, Little Rock lost its only Korean restaurant, Kimchi Korean Cuisine, 3700 S. University Ave., at the end of October 2020.

WRAPPED UP IN CHAINS

In April, the Chick-fil-A at 6201 W. Markham St., Little Rock, across from Park Plaza mall, went through a remodel that turned it into a drive-­thru-only. 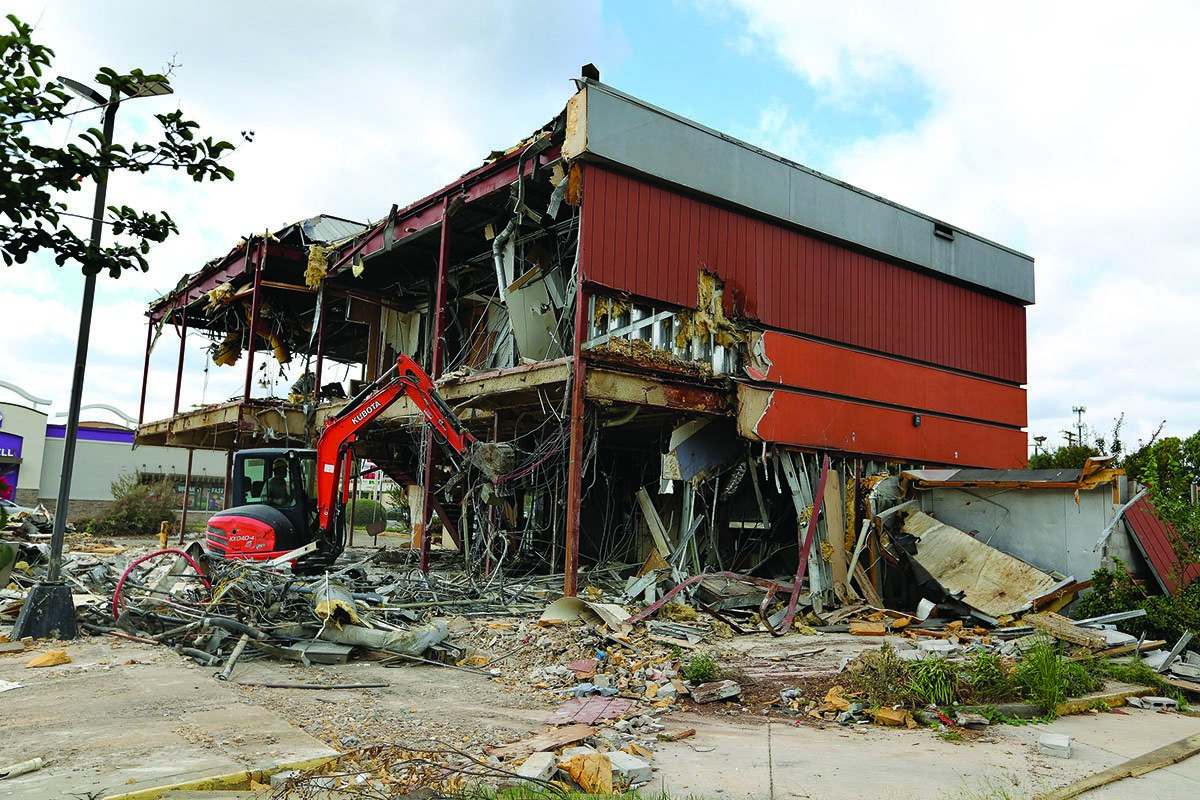 A crew tears down the former McDonald's at West Seventh Street and Broadway in October to make way for a drive-thru Chick-fil-A. (Democrat-Gazette file photo/Thomas Metthe)
Thomas Metthe   Meanwhile, once various Little Rock city agencies established approval, we saw the demolition of the block of West Seventh Street just east of Broadway, including the former McDonald’s and the strip of storefronts that had previously housed Ciao. In early November, a new building permit showed a Texas contractor would be handling a “ground-up construction of a drive-thru-only Chick-fil-A restaurant with stand-alone canopies” at 701 Broadway.

Meanwhile, the Chick-fil-A in the food court at North Little Rock’s McCain Mall, McCain Boulevard and U.S. 67/167, closed July 31 after 37 years of operation.

Co-owner/operator Ben Brainard confirmed in October that Little Rock is to get a Big Bad Breakfast sometime in early 2022, in the former Arvest Bank building at West Markham Street and Bowman Road, behind David’s Burgers. Brainard, who said he’s been working on this since he left Yellow Rocket Concepts a year ago, has the Keets’ JTJ Restaurants on board as minority partners and that there are plans to add additional Arkansas locations down the line.

Coming to the parking lot of The Other Center (near the Target) where McCain Boulevard meets U.S. 67/167: an outlet of Chicken Salad Chick. (The chain’s website, chickensaladchick.com, still only lists the outlets in Conway and Benton.)

And just so you shouldn’t think this portion of this story is all about chicken, news came in November that the neighboring former Pizza Hut, 3701 Warden Road, North Little Rock, behind the Target, is to become a Fazoli’s. We reported in 2018 that the Italian fast-casual restaurant chain, which once had outlets in Little Rock, Conway and Hot Springs, has been looking to expand in the state.